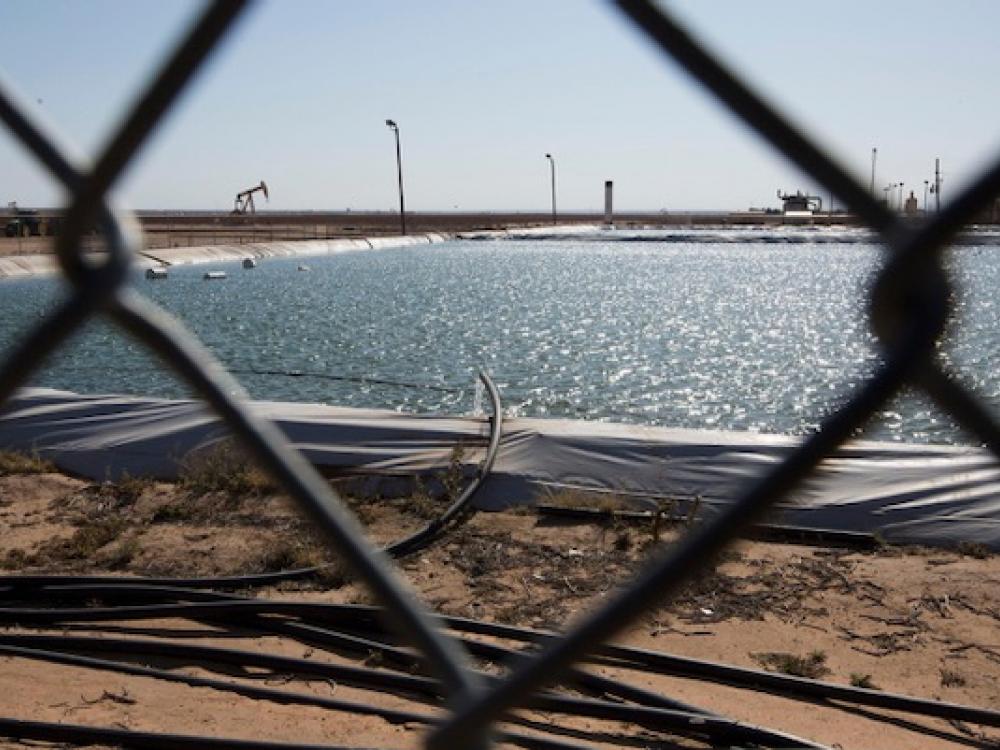 A recent EPA decision will allow Texas to regulate water discharges from oil drilling operations. Some lawmakers see a future water supply for the state in the decision, while environmental groups - and some scientists - warn it could be risky.​ Above, a fracking water retention pond near Big Spring.​ Photo by Marjorie Kamys Cotera/The Texas Tribune​.

Deep underneath the ground, fluids travel down and shoot through ancient shale formations, fracturing rock and starting the flow of oil - the essential part of hydraulic fracturing technology that's transformed America’s oil industry.

But that’s not all that comes up out of the earth.

Salty, contaminated water - held in porous rocks formed hundreds of millions of years ago - is also drawn to the surface during oil production. Before an oil price war and the coronavirus pandemic caused prices to crash in March, Texas wells were producing more than 26 million barrels of the ancient and contaminated water a day, according to an analysis by S&P Global Platts.

A new U.S. Environmental Protection Agency decision allowing Texas to regulate the discharge of the water after it’s treated could be a first step toward new uses of the water - at least that’s what some Texas lawmakers and oil and gas producers hope.

In the oil patch, figuring out how to dispose of this water “is something that only gets worse,” said Rene Santos, an energy analyst for S&P Global Platts. “Every time (companies) produce, they have to do something with the water.”

Usually, it’s later injected back underground, into separate wells - a practice that has been linked to increased seismic activity.

Sometimes it’s reused in another fracking well. But a new U.S. Environmental Protection Agency decision allowing Texas to regulate the discharge of the water after it’s treated could be a first step toward new uses of the water - at least that’s what some Texas lawmakers and oil and gas producers hope.

The EPA told the Texas Commission on Environmental Quality last week that the state could take charge of the federal government’s responsibilities to regulate discharging so-called "produced water," if the water met certain toxicity standards. Previously, operators had to obtain permission from both the Texas Railroad Commission, which regulates the state’s oil and gas industry, and the EPA before discharging the water.

For now, oil and gas operators may apply for individual permits from the TCEQ on a case-by-case basis, an agency spokesperson said. State regulations for the discharges will remain the same as current federal standards, according to a TCEQ press release Wednesday. No applications have yet been received, a spokesperson said.

For every barrel of oil produced in the Permian Basin of West Texas, an average of six barrels of water come up with it, according to an S&P analysis. State Sen. Charles Perry, R-Lubbock, argues that the water could eventually help the state

As chairman of the state Senate Committee on Water and Rural Affairs, he helped produce an interim report ahead of the 2021 legislative session that included such a vision - and now Perry says the recent EPA decision will help get federal regulation out of the way.

“This is a water supply that hasn’t been cultivated or tapped,” Perry said. “It’s a sin to waste that resource.”

The industry, too, has “a lot of excitement” about turning the water into something of value rather than an expense, said Jason Modglin, president of the Texas Alliance of Energy Producers.

But scientists and industry observers say the idea is a long shot. Produced water contains high amounts of salt, as well as other minerals and toxins in varying amounts depending on the shale formation it comes from, and technology to make the water potable is still expensive.

Bridget Scanlon, a hydrogeologist and senior research scientist at the University of Texas at Austin, said little is known about what risks produced water could pose after treatment, and significant scientific analysis needs to be conducted before it is discharged into the environment.

“We don’t know as much about this” compared to other sources of water, she said. “At the end of the day, you need to have confidence in what you are doing.”

Perry said he will soon introduce a bill that would direct research and analysis on the technology, costs and feasibility of using produced water for new purposes. His vision in the coming decades: big plants in West Texas and the Panhandle that transform the salty, contaminated water into something that can replenish aquifers on a mass scale.

Perry said he will soon introduce a bill that would direct research and analysis on the technology, costs and feasibility of using produced water for new purposes.

“This was the first step, really - one of the steps that had been a barrier,” Perry said of the change in regulations. Now, he said, “the regulatory environment is set up to have the produced water conversation.”

“The technology is there, but it’s the expense,” said Santos, the energy analyst. For small operators, especially, “it’s economically prohibitive to clean the water.”

An entire industry has sprung up around supplying fracking operations with water and disposing of the produced water: The water management market for oil and gas production in the U.S. was worth $33.6 billion in 2018, according to IHS Markit, a London-based energy analysis firm.

WHAT'S IN THE WATER?

Environmental groups and some scientists warn against releasing the produced water, even after treatment, into Texas streams and rivers.

“We don’t have standards for produced water - we’ve never had to deal with it,” said Scanlon, the UT hydrogeologist. “I think we need to look at it in a different way than municipal wastewater.”

She said the “lowest hanging fruit” is to use the water for other fracking wells. Less treatment is necessary to do so, and more reuse of the water by industry would ease the strain on limited freshwater resources in Texas.

“We don’t have standards for produced water - we’ve never had to deal with it,” said Scanlon, the UT hydrogeologist. “I think we need to look at it in a different way than municipal wastewater.”

Environmental groups say current federal standards for treatment and discharge of produced water - which Texas says it will match as it takes over regulation - are too low to adequately protect the environment.

“Federal regulations haven’t been updated at all,” to respond to the rising problem of disposing of produced water, said Alex Ortiz, a water resources specialist for the Sierra Club’s Lone Star Chapter. “The EPA doesn’t have enough knowledge (about produced water).”

He said the Sierra Club will challenge the decision to give Texas regulatory authority, with the hope that an EPA led by the Biden administration may find a way to reverse the move. The group also aims to push state lawmakers to create tougher water discharge standards.

“Federal regulations haven’t been updated at all,” to respond to the rising problem of disposing of produced water, said Alex Ortiz, a water resources specialist for the Sierra Club’s Lone Star Chapter. “The EPA doesn’t have enough knowledge (about produced water).”

But Perry, who will soon push his bill in the Legislature, said environmental groups are creating an issue “when there’s not an issue.” As for the costs, he said the state government may have to find a way to help fund a pilot project for reusing produced water.

“As a state, our water supply and ability to guarantee the water supply is a No. 1 priority,” Perry said. “People think we have plenty of water. Truthfully, we don’t.”

Disclosure: The Texas Alliance of Energy Producers and the University of Texas at Austin have been financial supporters of The Texas Tribune, a nonprofit, nonpartisan news organization that is funded in part by donations from members, foundations and corporate sponsors. Financial supporters play no role in the Tribune's journalism.