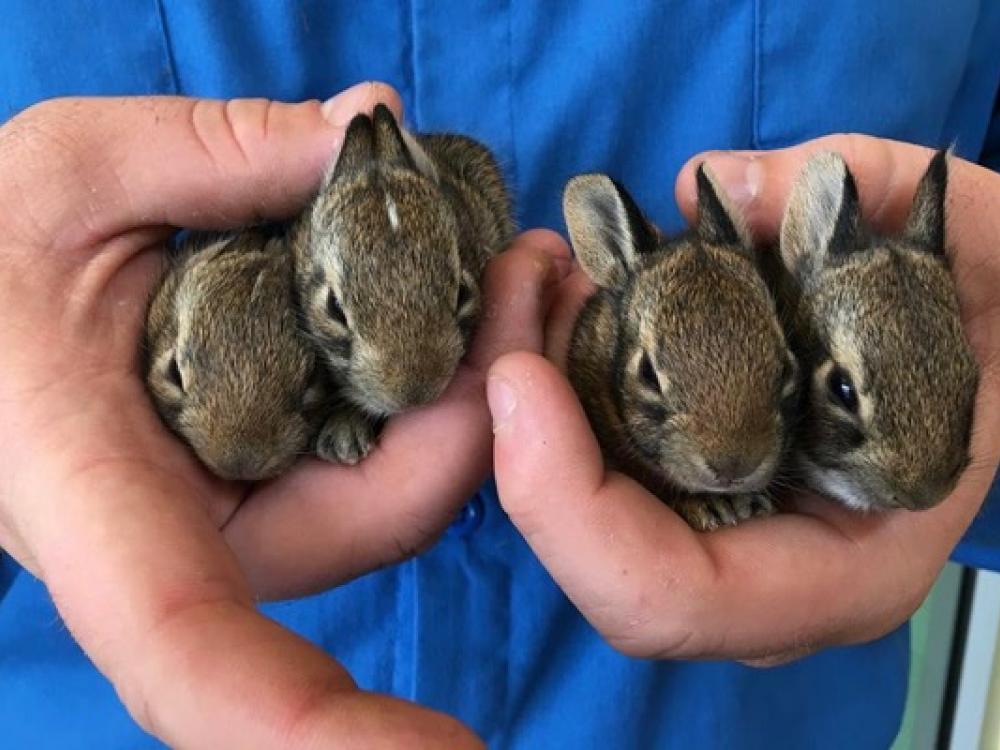 When it rains, it pours… bunnies. Spring deluges wash young cottontails out of their nests. Often found suffering from hyperthermia or gravely battered, they must be rushed to treatment if to survive, then raised to adulthood and released.

After a recent spring storm, Dallas-based Rabbit Rescue activated their volunteer network to take in 42 dislodged baby cottontails, along with a handful of other critters. Volunteers soothed the quivering bunnies, nestled them in crates atop heating pads, bottle-fed and groomed them. 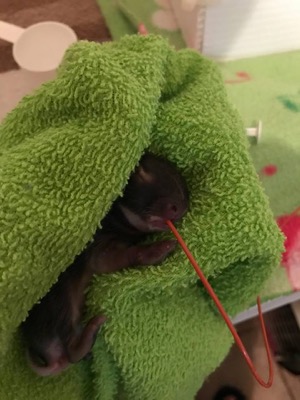 Young cottontails start pulling away from human contact at about three weeks, when able to lap milk rather than bottle nurse. They move outdoors into exercise pens and eat mostly hay. Once grown to the size of a baseball, fully transitioned from milk to grass-based diet, and accustomed to being outdoors, they are ready to go. Rabbit Rescue releases them, usually onto a large property in Denton County.

“My living room is in complete furdom disarray since this last round. My kitchen is not a kitchen; it’s an ICU for baby cottontails, full of carriers on heating pads. My dining room is a ward for nursing bunnies. But I’ve rescued rabbits for 30 years now. I don’t see me ever giving up my wildlife.” 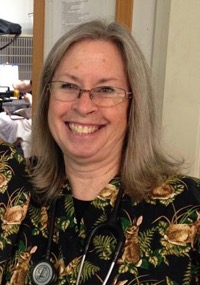 It’s not like she has a choice. A difficult, neglectful childhood left her being reluctantly raised by grandparents who abruptly disposed of a pet rabbit.

“Being thrown away as a kid, I gravitate to the animals most helpless and in need,” Leggett confided. “Rabbits don’t have a voice. They make no sound; they’re mute. The only sound they make is when they scream. ”

Diana Leggett is the founder of Rabbit Rescue.

“You can do what you’re meant to do and make a difference,” she added. “That’s what we’re supposed to do — make a difference. That’s earning our haloes. For me, the rabbit epitomizes vulnerability and innocence. They need someone to speak for them. We’ve still not evolved our consciousness enough for everyone to see that a rabbit is a conscious animal and not a thing.”

Though busiest in the spring, volunteer rescue of wild baby rabbits goes non-stop from February to October. In 2016, Rabbit Rescue, a 501(c)3 non-profit organization, rehabbed over a thousand cottontails.

“I thought that was bad,” said Leggett. “This year is going to be worse. I’m already over 300 rabbits and it’s just April.” 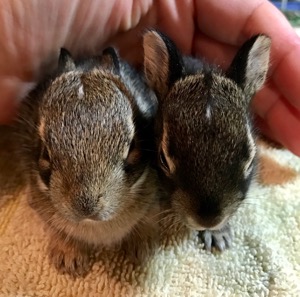 Baby bunny rehab is particularly difficult. Rabbit skeletons are very fragile for their size. Bones break easily, especially if the animal is dropped or handled roughly.

Plus, “You can’t just feed them and keep them warm like you would a squirrel or raccoon,” said Leggett, “You have to help them with the caecotroph process.”

When a rabbit eats, the vegetable matter passes through their digestive system into non-feces droppings called caecotrophs, which the rabbit eats. This allows a second pass on the roughage to extract the maximum nutritional content. Rehabbers must stroke the babies and clean the rectums to get that process going, just as the mother rabbit would have done. St. Melangell, the Irish patron saint of rabbits, shines through these volunteers.

Rehabbers nurse the babies a few times a day. To avoid drawing the attention of predators to the nest, mothers stay away 99 percent of the time. They visit for only a few minutes to nurse and clean. To be so quick, necessitates a high-pressure lactation. 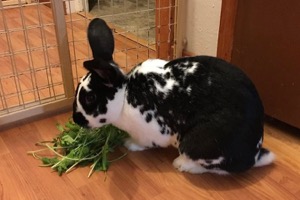 “It’s like a garden hose,” said Leggett laughing. “The babies lie on their backs and suck. Holding on with their teeth — ow! They take in 30 percent of their body weight in 30 seconds.“

It takes about 10 days for baby bunny eyes to open and then a couple weeks for the transition from formula to hay, subbing in for fresh grass. Then off they go. In addition to the Denton area, “We’ve helped repopulate Lewisville Lake Environmental Learning Area and Connemara Conservancy,” said Leggett.

Some have gone to the Lyndon B. Johnson National Grassland near Decatur, Oklahoma, and other states for restoration projects. 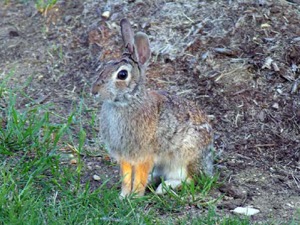 The eastern cottontail is most commonly found rabbit in North Texas. Photo courtesy of Chris Jackson/DFWUrbanWildlife.com. The legendary jackalope, as seen on this 1968 postcard, is more elusive. Courtesy of LegendsofAmerica.com. 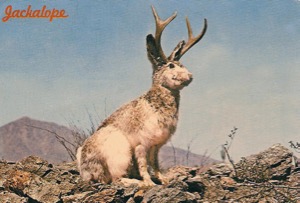 The largest in Texas is the black-tailed jackrabbit (Lepus californicus), weighing four to eight pounds. But instead of being a rabbit of the Sylvilagus genus, it’s a hare, which boasts larger bodies, bigger muscles and ears nearly a foot long. Hares are essentially unable to be domesticated. The existence of the fabled horned jackalope remains as elusive.

Want to see a jackrabbit? There are colonies at Greenhill School and Addison Airport, in many areas around Denton, and all over West Texas. Texas Tech in Lubbock is said to host a large jackrabbit colony. The world's largest jackrabbit statue resides in Odessa, but at only eight-feet tall Bugs would not be impressed.

How to Rescue a Rabbit 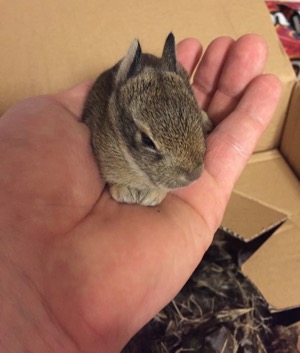 Bunny nests are usually left unattended by the mother, so no or minimal assistance is usually needed. But if you find a rabbit that is wounded, covered in bugs or extremely distressed, locate your closest rehabber and follow the steps below. As prey animals, rabbits stress quickly, so do not chase. Instead, try to lure with food. If rehab is required, handle the rabbit as little as possible and do not give food or water.

If you find a young, able-bodied rabbit out in the open and at risk, coax or move it to a safe location on the ground, providing shelter if needed. Mother rabbits will not abandon their young if human handled. Try to locate the nest and rebuild if needed. If you suspect the mother has died, lay pieces of string across the nest in a checkerboard pattern. Check for disturbance over eight to 12 hours before taking to a rehabber.

Speed is imperative in treating delicate young rabbits. If you’re in an area with bunnies, it’s best to prepare. Rabbit Rescue details how to rescue and return the animal to its nest if possible or transfer to a rehabber in this webpage and more in this one. 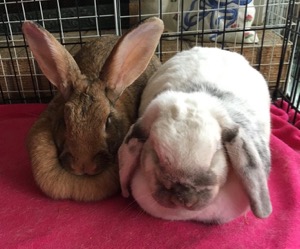 Have these rabbit rescue supplies on hand:

•    Boxes from shoeboxes to tall-sided medium

About: The nonprofit founded by Diana Leggett rescues wild rabbits in North Texas and returns them to the wild. The group also rescues domestic rabbits from DFW animal shelters and finds good homes for them.

Next week, look for the second part of Amy's Easter-time bunny series, when she profiles a rescue group that specializes in rescuing domestic rabbits.