North Texans take to bike trails as pandemic rolls on 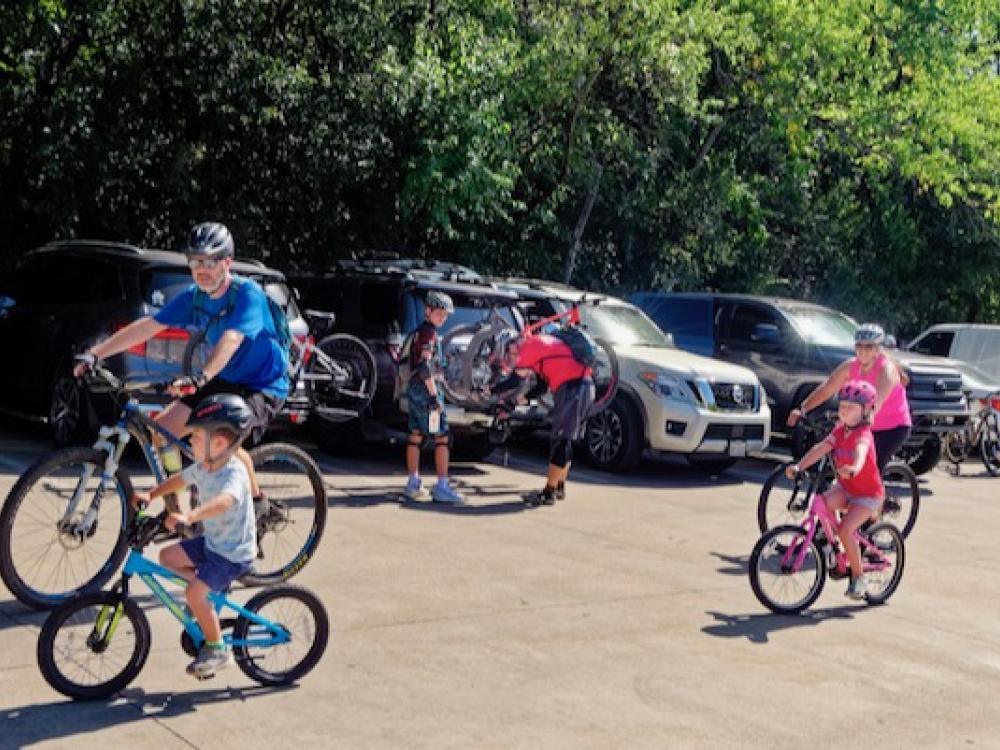 On a recent hot July day, The Porter family drove from Grapevine to bike in the shade at River Legacy Park in Arlington. Photo by J.G. Domke.

With Covid-19 still keeping folks out of the gyms and malls, many people have been hitting the bike trails to get out of the house

According to a New York Times article in May, this is part of a nationwide biking boom. It's caused a severe bicycle shortage as global supply chains scramble to meet the demand.

He said sales are up by more than 600 percent this year compared with the same period in 2019.

Locally bike sales have soared, with shops selling out of popular models and customers paying full price for bicycles on backorder.

Arlington resident Peter Bergamini, 31, says with bikes selling out, he told his parents to bring their own when they come down from St. Louis to visit. He added that he probably won’t be renewing his gym membership once the gyms reopen and may take up biking to work, as he once did in the past. 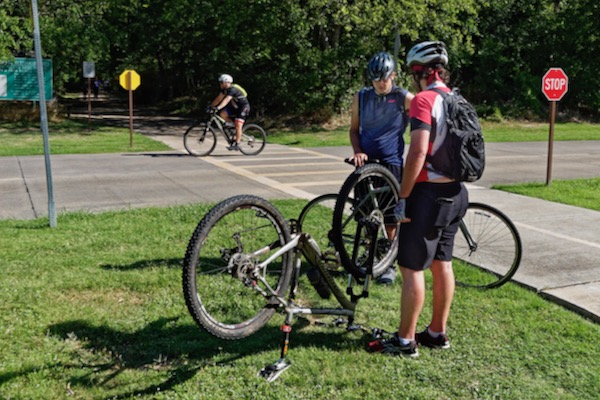 In River Legacy Park, Peter Bergamini and his friend from Fort Worth prepare to ride the trail. Photo by J.G. Domke.

Since the bicycle rush that started in May, he says there are a lot more cyclists in the parks these days. So to avoid the crowds, he says he has been getting up four times a week at 4:30 a.m. and biking from his apartment to Arlington’s River Legacy Park that runs along the Trinity River.

Bicycle shops like Bicycles Inc, which has stores in Fort Worth, Arlington and Southlake, was expecting to get a break in July. But Traci Jordan at the store’s Hurst headquarters says they are as busy as ever. The showroom space has been emptied and customers are bringing bikes back in for repairs - fixing flats, brakes, adjusting gears, etc.

Asked to recommend some “cool trails,” where you can bike in the shade so it’s 10 degrees cooler, Jordan mentioned the Cotton Belt Trail Corridor, whick follows the former St. Louis Southwestern Railway, nicknamed the Cotton Belt line. Discontinued in the 1970s, today, the rail corridor is part of the planned network of Dallas-Fort Worth trails called the Veloweb.

According to Trail.com, the rail-trail consists of two disconnected segments: a section running from North Richland Hills to Colleyville and a shorter section in Grapevine. The corridor is shaded in many places, passing among neighborhoods, business districts, and city parks.

She also recommended the award-winning Dallas Trail Plan and the Horseshoe bike trail in Grapevine, managed by the Dallas Off-Road Bicycle Assocation.

The serious biker can join one of the 25 bike clubs listed in North Texas.

The LoneStar Cyclists with members in the Mid-Cities, posted on their website how the club supports outdoor exercise “due to its ability to boost the participants immune system and improve overall health.” They normally have a couple of group rides each month.

Meanwhile, the Greater Dallas Bicyclists agreed to follow the USA Cycling and the Centers for Disease Control recommendations to suspend all club organized rides. 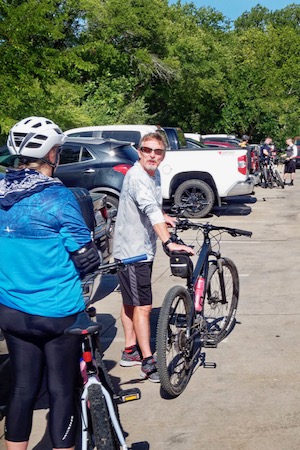 Carolyn and Troy Snyder in the busy parking lot at River Legacy Park prepare to ride. Photo by J.G. Domke.

Biking has become an activity for the whole family. On recent day at River Legacy Park, Ian Porter along with his wife and their two kids, six and eight years old, drove more than 20 miles from Grapevine to go biking in the shade.

Carolyn Snyder and her husband Troy of Keller are in their 50s and bought new bikes at REI in May. They say they are riding every weekend and drove down from Keller to ride for the third time in the cool shade at River Legacy Park in Arlington.

Going to visit their son in Colorado in June they even brought their bikes.

“Rode the mountains up there,” says Troy Snyder. “True mountains! It was a great experience going downhill, unbelievably fast. Going uphill is harder.”

If you do venture out, be sure to follow bicycle etiquette. Dallas Park and Recreation Department offers some guidelines to follow: cyclists should always ride single file, always pass on the left, pedestrians have the right-of-way, wear reflective clothing and use bicycle lights when on the trail after dark.

From our observation and as well as those we spoke to, most riders are not wearing masks.

David Hahn, the owner of a Richardson-based digital agency that provides Green Source DFW with technical support, said instead of battling the crowds at White Rock Lake where he regularly rides, he's been spending a lot of time on his home bike trainer.

"I've been riding Zwift this spring and summer."

Note that whether you're on the trail or a stationary bike, according to the Texas A&M Extension office, riding seven miles is equal to walking one mile.