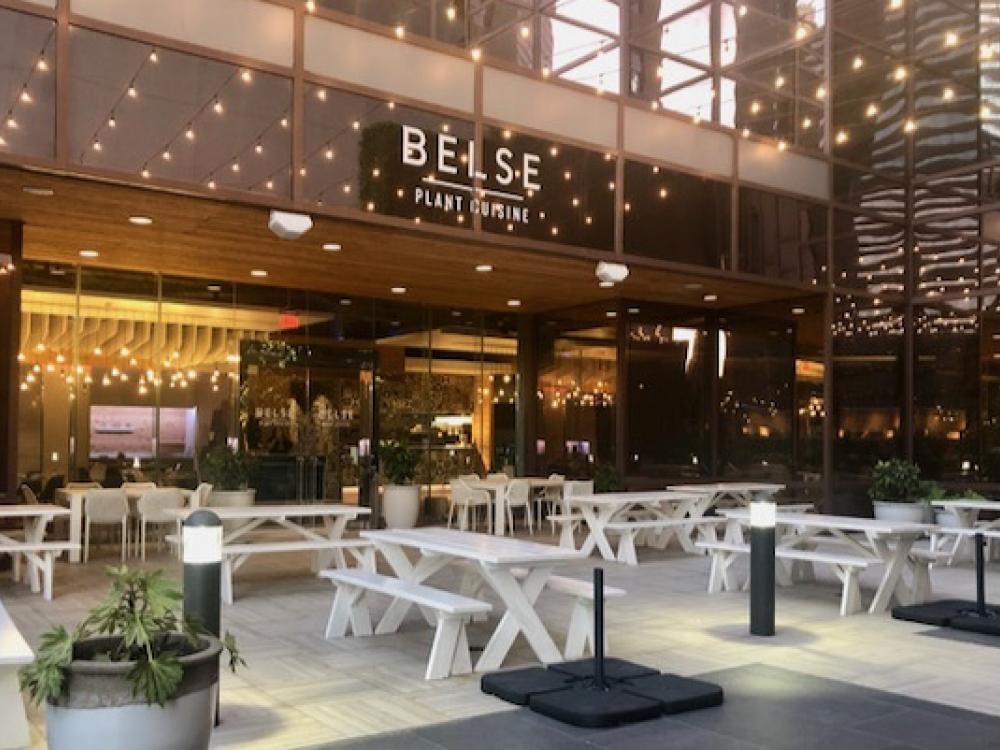 The high-end plant based venue launched last year in a sleek new spot amid downtown Dallas parks. Above, Belse’s outdoor patio is quiet and dog friendly.​ Photo by Amy Martin.

Settle in with a sizable entrée or cobble together a meal from imaginative soups, salads and appetizers. Finish with a cute dessert and walk it all off at the many nearby parks.

In better weather, bring the dog and nosh on the outdoor patio comfortably inset from the street and decorated with draped strings of small white lights. Watch the neon come on the nearby skyscrapers.

The high end vegan venue from the operators of the top-rated Little Pine in LA launched last year.

On a quiet Wednesday night, my husband, Scooter Smith, and I settled into a table by the windows overlooking Pacific Plaza. We watched the greenspace become increasingly populated with after-work amblers and dog walkers as tall buildings cast cooling shade. 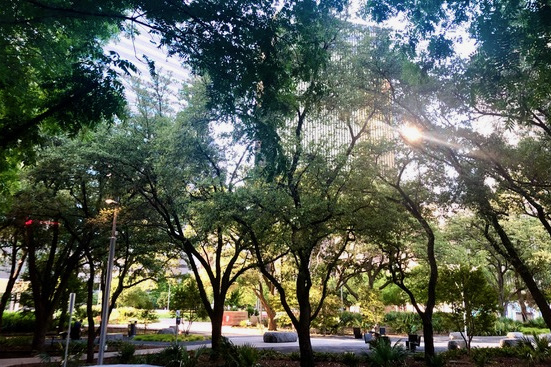 First up was the Crispy Cauliflower appetizer, one of the restaurant's most popular offerings. The extremely crunchy panko-breaded cauliflower bites' sweet chili marinade provided a fun contrast to a sweet charred pineapple dipping sauce. The house manager noticed we were lapping up the sauce and brought us a second ramekin. 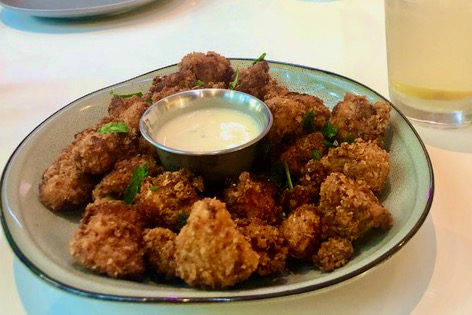 The Crispy Cauliflower was exceedingly crisp. Photo by Amy Martin.

Scooter had his eye on the Patty Melt, another best seller. The sizeable Impossible Burger patty was juicy yet well grilled, set between slices of seed-and-nut rich whole-grain bread spread with Calabrian chili aioli.

The dish would make any beefeater happy yet appealed to Scooter, a long-time pescatarian.

His first time to try an Impossible Burger, Scooter noted:

"I haven't had a burger in over 30 years. It's how I remembered it but better. Perfectly dressed with mushrooms. The plant-based cheese is what ties it all together." 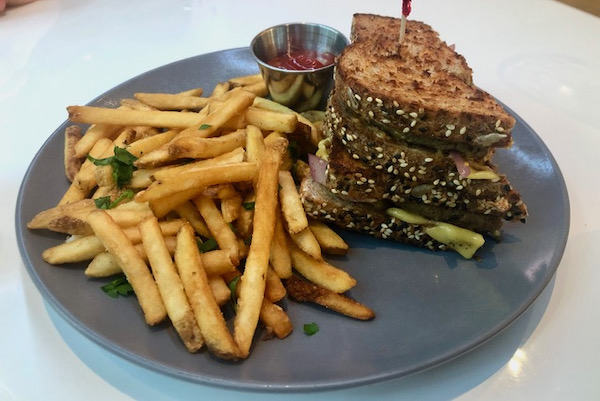 The menu includes other hearty dishes such as panko-breaded Gardein Chick'n Scaloppini and an intriguing Apple Sandwich with Prosciutto-style cured smoky vegan ham slices by Mia of Italy.

Having not eaten meat since I was five years old, I lost my taste for it decades ago. I went for another popular dish, Sweet Potato Empanadas, featuring black beans, corn and Violife cheddar.

More like a fried samosa, incredibly filling but a bit greasy. The sweet chimichurri sauce did little to enhance the empanadas, but they were plenty tasty without it. 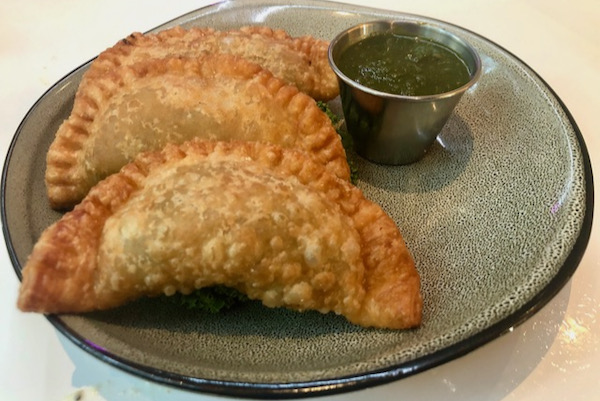 The Tomato & Cactus Soup — stewed Roma tomatoes and cactus plus additional sautéed nopales — was an absolute revelation in taste and a beautiful sight.

Garbanzo beans, sliced avocado, and an attractive topping of crispy red tortilla strips added an array of tastes and textures. It was like the Southwest in a bowl. 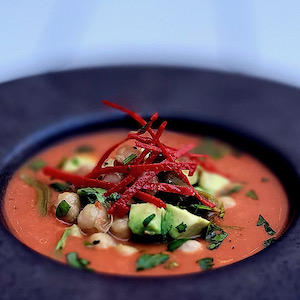 Overly full by this point, we'll be back for the Mocki Roll, which gets raves. It’s sushi made from watermelon, of all things! Dressed with a vegan version of Japanese nitsume seafood sauce, it comes as an appetizer or a salad.

Other veggie-rich dishes include quinoa blended with sauced veggies done as a bowl or stir-fry, various filling salads, some flatbreads and Root Vegetable Soup, plus sides of creatively flavored broccolini, brussels sprouts and cauliflower.

The only downside of our meal was that we were too full for the rotating array of desserts. This week was apple tartlet with crumble topping, flourless dark chocolate cake adorned by plant-based whipped topping, and dark chocolate chip cookies with oat milk to dip in. A favorite prior offering was a light, silky hibiscus cheesecake crafted from white beans. 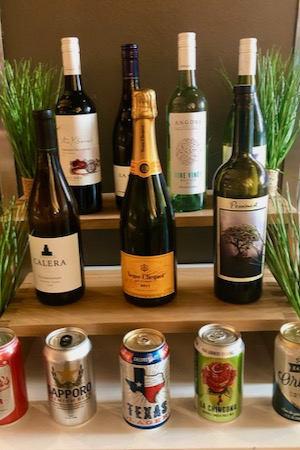 Belse serves beer, cider and wine. Look for the display by the door. The menu drinks are nothing special and don't warrant the price increase, so stick with the basics.

An exception to this is the well-received smoked sangria. The red wine and fruit blend arrive in a chilled glass inside a smoke-filled dome.

A popular concept, there is also a Belse NYC, making three in the Little Pine vegan empire.

Belse has an uplifting spaciousness and sleek modern décor, with tables spaced widely apart and a high ceiling with subdued lighting. A trippy red mirrored wall leads to a unisex communal bathroom. Private stalls with full doors surround an open area with a trough handwashing station along one wall and Dyson hand dryers. 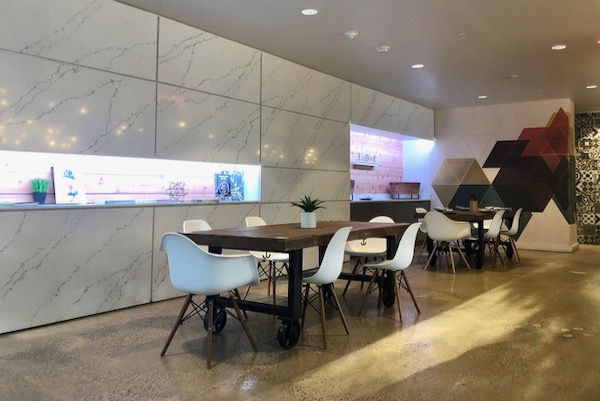 Our meal with appetizer and drinks came to around $70. We found on-street parking, free after hours, so we paid no fee. But had we used a nearby lot from 4 p.m. onward, Belse would have partially reimbursed the cost with receipt.

On our way out, we stopped to admire Shepard Fairey's immense Belse logo that adorns a wall. As stated by Fairey on the Belse website: "I chose to use symbols of harmony with the Earth in the Belse logo because plant diets have a much smaller carbon footprint. The hands holding up the Earth within a Lotus flower represent an exuberant nurturing of harmony with the planet and the cultivation of good karma. I chose the Belse colors, different shades of blue, to suggest the air and water that sustain life on Earth."

DART's St Paul Station and East Transfer Station are within a few blocks, so consider taking mass transit in, especially if visiting during business days. The walking route to Belse from the station takes you near Main Street Garden Park and Carpenter Park.

Thanks-Giving Square is just three blocks away, and the Majestic Theater is around the corner. An easy mass-transit commute, park amble, dinner at Belse and a Majestic show sounds like a perfect night.

About: A high-end restaurant serving plant-based cuisine, created by the owners and operators of Little Pine in L.A.