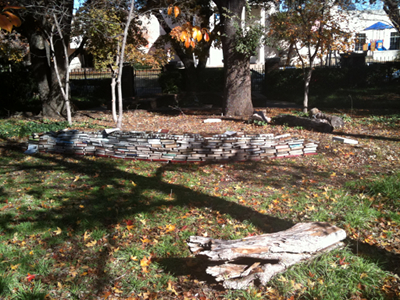 She’s an artist simply known as Vet. While she has been living in Dallas and working at her art for the past 25 years, it is several of her upcoming projects that have her really excited these days. “My year has started off fast and furious,” Vey says, noting that she “just opened an encaustic show at the Central Library Gallery last week called Waxed Over. She is also working on solo show for the Desoto City Hall in February. Vet is also creating a giant puppet of Mattie Nash (former council woman and Fair Housing Advocate in West Dallas) for the March Bridge-o-Rama Parade of Giants in Dallas.

Though she began her career with a focus on drawing and painting, Vet says she became involved with a group of artists and community organizers called 'Art From Scrap'. The group collected industrial overruns and surplus and then offered it to the community for use in art projects.

“I began incorporating these objects in my art workshops and in my personal art pieces,” she says.  “A lot of recycled items are non-toxic overruns and surplus from businesses that would normally be discarded. I also trade and barter with other artists. The question I always ask is ‘What can I make with this?’  Most art pieces are more aesthetic than functional.”

Working with non-toxic recyclables, Vet says she occasionally will receive items that may have electronic components with mercury, zinc, or lead, which she takes to a city disposal facility.

“I like working with multiples of one item, like different bottle tops, melted crayons, beeswax, shola berry wood chips, fabric swatches, old books, pull down shades, gourds, and pear pods,” she explains. She says some of her favorite creations include a 30-foot Book Berm (see photo) she recently built with another artist, Sheila Cunningham, from discarded books.  She says she also enjoys creating book furniture and has created a giant lollipop, Styrofoam people, a folded paper tree, miniature dolls and her current encaustic series with found objects.

Drawing her ideas for the objects, Vet explains that “the objects drive the art piece.  There's lots of sorting involved in my process and sometimes an idea springs from an object I have handled.  The idea may come right way and other times I have to work though the mechanics of it first.”

Her latest inspirations in her creations are “the nature of working with encaustic, beeswax and dammar crystals, and how it interacts with found objects.  It seems to soften the hard edges and enhances the beauty of these small compositions.” Her most popular items are the miniature “Omi-dolls” and her pouches.  Both are made from hand-stitched fabric scraps and embellished with beads.

“Working with recyclables expands my range of mediums by allowing me to combine craft and fine art,” Vet concludes.

Vet’s work, which goes for $25 to $300 for Fiber Art and $50 to $1000 for Mixed Media  and Encaustics, can be seen on her blog at www.artcycletx.blogspot.com or on her website at www.foundobjects.50megs.com.