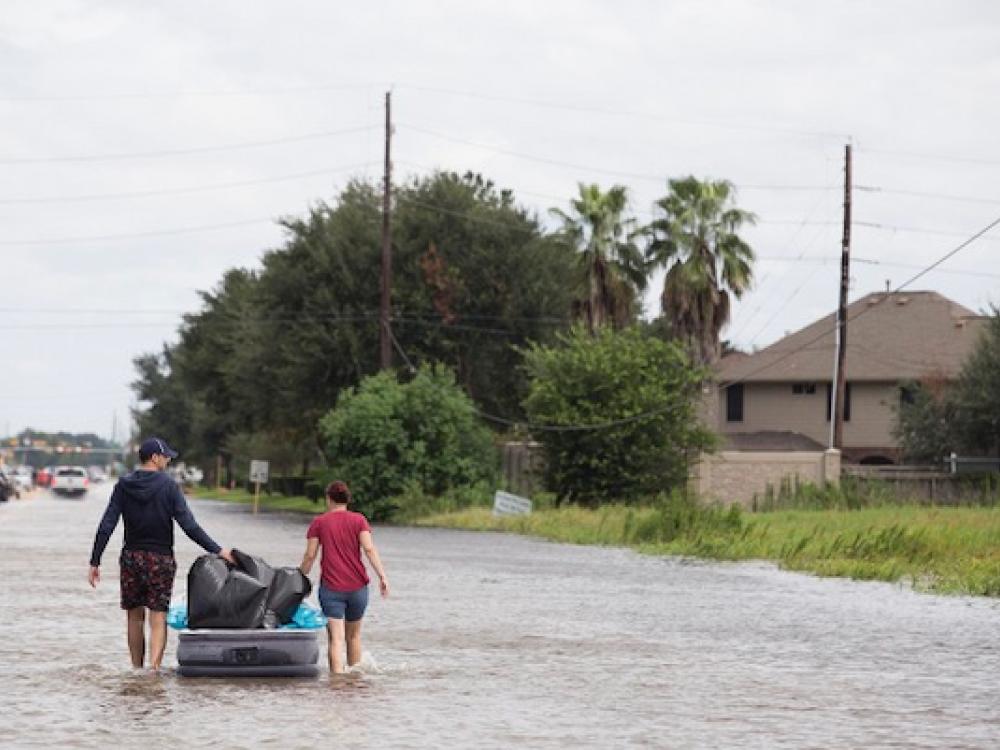 Mega-storms like Hurricane Harvey have cost the state billions of dollars, according to a climate assessment commissioned by the city of Houston.​ Photo by Michael Stravato for The Texas Tribune.

The climate, environment and energy caucus aims to start a conversation in the Legislature on how Texas can prepare for climate change and take advantage of the transition to cleaner energy sources.

Seventeen Democrats in the Texas House launched a climate, environment and energy caucus last week with one simple goal: to talk about climate change at the Texas Capitol, where conversations on reducing emissions of greenhouse gases have been sidelined for years.

Led by state Rep. Erin Zwiener, D-Driftwood, the caucus includes Democrats from major cities across the state. During a press conference last Wednesday, each spoke about a host of greenhouse gas-reducing strategies they’d like to accomplish — from removing barriers to widespread adoption of electric vehicles, to focusing state environmental cleanup efforts in communities of color to preventing chemical explosions.

But the overarching objective of the caucus this year is more basic.

“We are in violent agreement about the end goal,” said state Rep. Rafael Anchía, D-Dallas, who said he wanted lawmakers to acknowledge the scientific and international consensus on climate change. “We want the Legislature to be led by science on this issue.”

Rep. Ron Reynolds, D-Missouri City, pointed to recent action by the Biden Administration making climate change a national priority and said he wants Texas to be part of that initiative, which could have federal dollars attached.

“We are in violent agreement about the end goal,” said state Rep. Rafael Anchнa, D-Dallas, who said he wanted lawmakers to acknowledge the scientific and international consensus on climate change. “We want the Legislature to be led by science on this issue.”

Caucus members acknowledged that getting Texas Republicans to discuss climate change, which has become a fiercely partisan issue in a state where the oil and gas industry wields huge political clout, remains an uphill battle for Democrats. Zwiener said some Republicans were invited to join the caucus, but declined.

Members pointed out that the Legislature didn’t hold a single hearing on any bill related to climate change during the last session.

The new caucus won’t formally endorse any legislation this session, members said. Instead, they have their sights set on a more modest goal they hope is achievable — holding at least one hearing on climate change.

“We’re not asking for anything other than to allow for a discussion [on climate change] and to have scientific experts come in and educate the members,” said Reynolds, who sits on the House Environmental Regulation Committee. “We can, at minimum, have a hearing on these issues.”

Caucus members pointed to emerging trends in the energy and transportation sectors as evidence that Texas needs to encourage the energy transition to cleaner sources or risk falling behind.

Several oil and gas companies have announced plans to invest in carbon capture technology, including Houson-based Occidental Petroleum, which announced it will build a commercial-scale carbon storage site and facility to remove carbon dioxide directly from the air by 2025. Tesla is constructing a massive automotive manufacturing facility  near Austin to build electric vehicles.

“Whether we like it or not, energy markets are shifting, and we need to adapt to that or be left behind,” said state Rep. Jon Rosenthal, D-Houston, an engineer who has worked in the oil and gas industry. “I’m going to be looking for ways to partner with industry.”

Local governments in the state have already taken steps to address climate change. Both Houston and Austin have joined “C40 Cities,” a group of cities committed to adhering to the goals of the Paris Climate Agreement, an international agreement to limit global heating to 2 degrees Celsius this century and pursue limiting it to 1.5 degrees.

The physical effects of climate change, too, are already being felt in Texas. On the Gulf Coast, stronger hurricanes energized by a warming ocean have cost the state billions of dollars due to increased wind damage and greater precipitation during mega-storms like Hurricane Harvey, according to a climate assessment commissioned by the city of Houston. The Environmental Protection Agency projects Texas will experience longer and hotter summers and more water scarcity, which will result in a variety of economic, environmental and health concerns, including heat strokes becoming more common among people who work outdoors and declining crop yields.

The impacts of climate change and environmental contamination are more acute in predominantly Black and Latino neighborhoods in Texas due to the legacy of government-imposed housing segregation, which historically pushed people of color into areas with more polluting industries and higher flood risks. Members of the caucus said this disproportionate burden bore by communities of color will be a key point of their advocacy at the Capitol.

Caucus members said they see potential areas of compromise with the Republican majority, including bringing more wind and solar power to market, lowering regulatory barriers to electric vehicles and creating incentives for carbon capture, utilization and storage, an already a fast-emerging trend in the energy industry.

“We believe these should be nonpartisan issues,” Reynolds said. “We can all fundamentally agree that we should have clean air, water and an environment. We’re not a partisan caucus.”