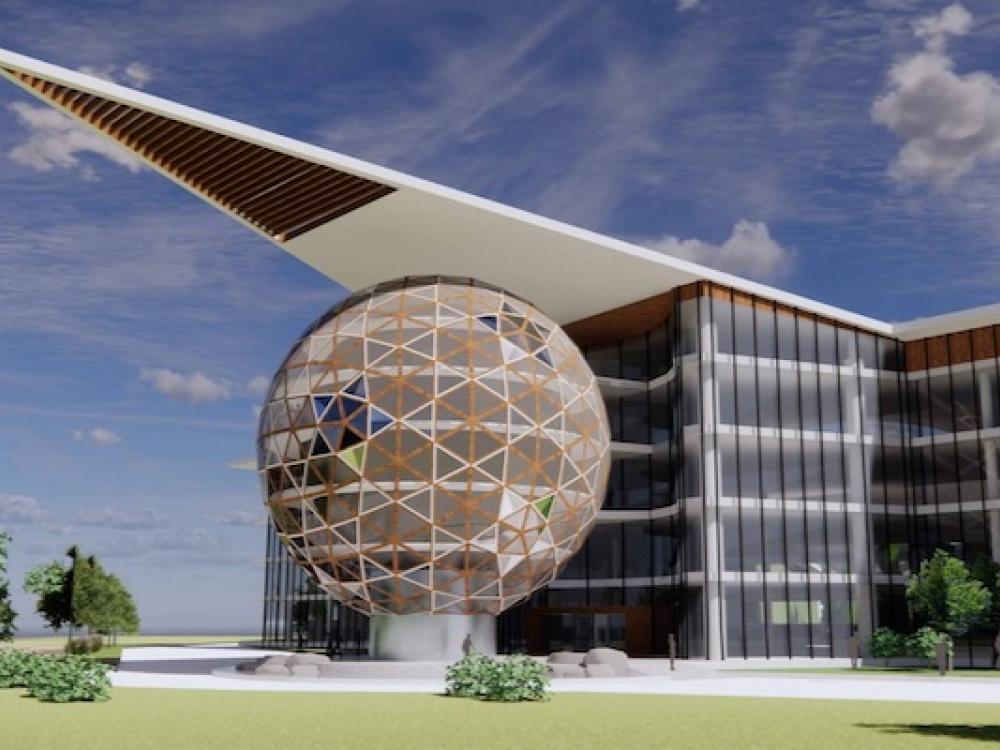 A rendering of the Ecoplex, an incubator for sustainable innovation, the vision of Joseph Horn of Fort Worth. Courtesy of Joseph Horn.

Fort Worth would become a center for innovation that addresses the world’s nagging environmental problems if a proposed project gains traction.

Pitched as the International Environmental Complex, the project is simply referred to as the Ecoplex. The campus would house an incubator for sustainable innovation, a museum of the environment and a place for scientists and thought leaders to collaborate, along with training facilities for the next generation.

The overall purpose of the project, still on the drawing board, is to take on the world’s most pressing issues of political and economic stability and the need for sustainable innovations that will ensure a better quality of life for people around the world.

“This is not just a good idea but a must-idea because it promotes societal and economic resiliency, de-politicizes sustainability and issues related to climate chaos, supports sensible innovations, accelerates commercialization, gives the youth or younger generation a prominent role in deciding the direction of their future, and increases national economic competitiveness,” says Joseph Horn, president of the Ecoplex.

Among the issues the Ecoplex would take on are the threats of future pandemics, the vulnerability of the electric grid from warfare and natural disasters, and climate chaos brought on by global warming.

“These and other threats are well-documented challenges to our survival,” Horn says. “We cannot plan our responses based on hope or white papers. We need sensible, real-world responses that have buy-in and support from all major and diverse stakeholders. I would like to say that we plan for the unanticipated. However, we must first plan for the anticipated threats.”

As a more specific challenge that humanity faces and the Ecoplex would investigate, Horn cites the coronal mass ejection of the 1850s, when the sun released a massive cloud of plasma and an accompanying magnetic field. Most CMEs, which occur from time to time, dissipate into space on one side or another of the sun. But every so often, one of the streams of superheated gas is hurled directly at the earth, which produces brilliant auroral light shows that stretch from the poles toward the equator. But they also disrupt satellites and, if big enough, could blow out electric transformers.

The CME that hit the earth in the mid 19th century completely wiped out the telegraph system around the world and set some telegraph stations on fire.

If such a CME occurred today, communications systems and the electric grid itself would experience outages worldwide.

“If the U.S. were hit by a geomagnetic storm of such intensity, we would expect about 90 percent casualties,” Horn says. “Just think — no running water, sewage, electricity. People think they could just drive out of the state — only if you have enough gas, because the gas pumps would not work. We need to design our electronics in a way to withstand an electro-magnetic pulse from a nuclear device or CME.”

Horn also cites the statewide failure of the Texas power grid in February, which happened just when power was most needed to mitigate the potentially deadly effects of subzero temperatures. The current structure we’ve inherited for powering our way of life is not sufficient, explains Horn, and a new approach is needed.

“We need to localize our power generation, water resourcing and waste processing. Plastering thousands of square miles of land with windmills and solar panels is not a real, viable solution. The plan for the Ecoplex has always been to do these things on-site. The technology is there. We just need to do it and then showcase it to the public,” he says.

A perpetually gridlocked Congress means that investment in the technology and policy development that will foster a sustainable future must come from sources outside the government, says Horn. Most nongovernmental organizations taking on global issues are concentrated on the nation’s coasts, making Fort Worth a prime location to bring such work within reach of a part of the country’s population that’s all too often left out of such developments.

“Moreover, we have counted so far over 500 national and international environmental NGOs, not including the state and local organizations. The overwhelming number of them are located on the East and West Coasts, meaning underrepresentation in the middle of America,” Horn says. “If Texas were an independent country, it would be eighth in terms of GDP. There is no reason Texas should not be a leader in sustainability.”

Horn says the Ecoplex could be one large campus, or more than likely it would need to be divided into several campuses so that the concept would better integrate with existing local resources.

A proposed Center for Innovation and Applied Solutions could have its own incubator complex, while another collaboration arm called the Earth EpiCenter, could be in a downtown location and in close proximity to mass transit and local college and university campuses.

“The museum ideally would be located in a Museum District, which if in Fort Worth would ideally be Farrington Field, preserving the stadium," Horns says. "Why? Because [Farrington Field] is in the heart of the Cultural District, adjacent to a large city park, and in close proximity to the number-one rated zoo in the nation, as well as the Dickey’s Center, the Botanical Research Institute of Texas, and the Fort Worth Botanic Gardens.”

Joining the five other environmental museums in the world, the National Environmental Museum would be the first museum in the U.S. that's entirely dedicated to the environment.

“What makes this museum so important is that it will act as a living laboratory and accelerator showcasing innovation and technology,” Horn says.

The Ecoplex has moved past its initial concept development stage, and now seed funding is being sought. Horn says ideally, the project will be supported by small donors so that more people would be engaged than if a sole benefactor contributed.

For his part, Horn says he brings his experience as an attorney to the project, along with a broad background in government, business, international law, mediation, financial services, nonprofits, public-policy dialogues and leadership. He’s worked at the U.S. House for more than a decade and was appointed by a House leadership committee to coordinate accessible architectural designs and changes to the U.S. Capitol Complex. He also managed a financial services firm, consulted for the World Bank Group and U.S. Government agencies, and served as co-trustee to the Texas-based Hamrah Charitable Trust.

The Ecoplex advisory council, consultants and board of trustees consist of more than two dozen leaders in education, law, corporate and nonprofit management, the arts and sciences.

Once up and running, Horn says the Ecoplex would have state-of-the-art labs, collaborative work spaces and meeting spaces for global leaders and the National Environmental Museum for the Environment, making Fort Worth an international center for sustainable development and helping to counter the politicization of eco values and the pejoration of a term that should apply to everyone who appreciates clean air and water and the beauty of the planet.