“I grew up on a 40-acre sustenance farm near Modesto, Calif. and learned how to grow vegetables and livestock from my parents,” Lambert says. “We sold to farmers’ markets and roadside stands and provided food for our family. After I left the farm in 1964, I joined the Peace Corps and worked in agriculture in Malaysia for two years, which I really consider the turning point in working in agriculture." 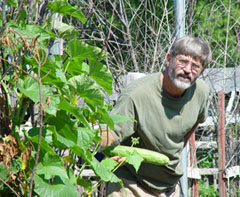 Lambert, founder of Dallas area nonprofit Gardeners in Community Development, had worked alongside his wife of 46 years, Tiah Lambert, for a number of years in teaching gardeners and trying to promote community gardening. On May 25, 1994, their dream was realized when GICD became incorporated. 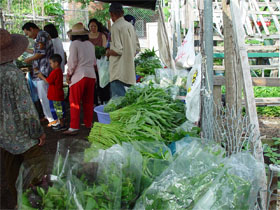 “Our mission is growing people,” remarks Lambert. “And thousands of professionals, volunteers, and supporters of community gardening and neighborhood greening make it possible for hundreds of Dallas area families, mostly low-income, to enjoy fresh vegetables, herbs, fruits and flowers grown in our community gardens.

“These gardens enhance the quality of life in area neighborhoods in many ways and provide a place to learn and share our joy of gardening with others.”

“We train the gardeners to a certain extent, and then they learn from each other through individual skills,” says Lambert. “There’s a sense of connecting and sharing with other people, because you’re enabling others to become gardeners.”

“I came to Dallas in 1982 and taught anthropology at The University of Texas at Dallas for four or five years,” says Lambert. “My wife and I had been working with community gardens strictly as volunteers in our spare time and after I left UTD, I worked for about two years with Texas Discovery Gardens."

Lambert and his staff supervise five community gardens inside Dallas city limits and through the efforts of the gardeners, from 2003 through 2010, records show that out of only two of those projects, over 50,000 pounds of fresh vegetables and fruit were donated to help alleviate hunger for families that have lost jobs, for seniors and children, and for neighborhood residents who are struggling in hard times.

“With more than 20 new community gardens started in the past two years, predominantly at area churches, most of which have adopted donation policies, the total pounds of fresh vegetables donated to alleviate hunger is much greater than indicated,” comments Lambert. 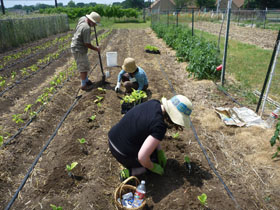 ProjectHands-on participation in the garden at The Church of Our Savior, 1616 N. Jim Miller Road teaches gardeners how to grow vegetables and fruit.

(Photo: Planting the pantry donation beds at the Center for Growing People, Our Saviour Community Garden from Don Lambert.)

“Community gardening is definitely making an impact on food security and hunger in the Dallas area.”

Lambert receives a modest salary from the monies raised from grants and donations. His philosophy is that he has always tried to teach people that it’s really not worth doing anything if you’re not helping someone else.