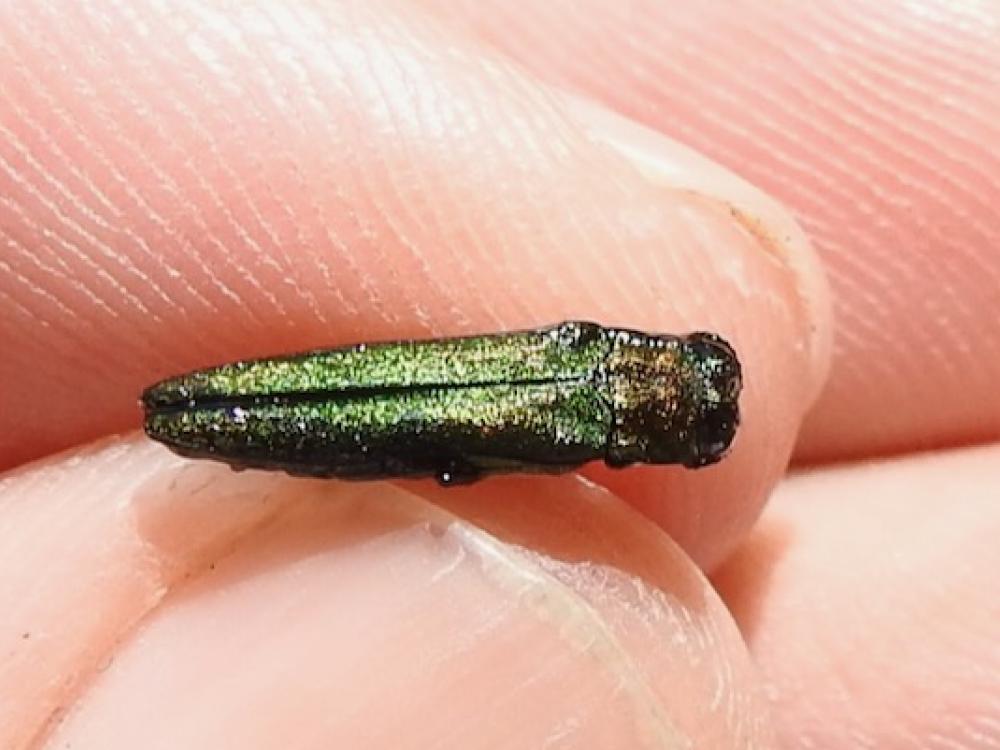 The emerald ash borer, seen above, has killed hundreds of millions of ash trees in the U.S. and now poses a local threat. Photo by Sam Kieschnick.

A small beetle with a big appetite has made its way to the Dallas-Fort Worth area, bringing with it the potential to devastate the region’s ash trees and their associated ecosystems. Conservation experts are warning of the need to act soon to stave off a destructive, full-scale attack.

The slender, metallic-green emerald ash borer, less than a half-inch long, already has killed hundreds of millions of ash trees in the U.S. and Canada, where it has spread to at least 35 states and eight provinces. Now, entomologists and forest specialists are warning that the EAB poses threats to North Texas ash populations ranging from isolated die-offs to outright extinction. 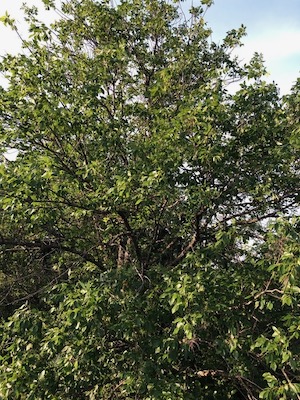 In December 2018, emerald ash borers were confirmed to be damaging ash trees in Fort Worth’s Eagle Mountain Lake area. The bugs are believed to have been transported there inadvertently from the Midwest, possibly in firewood. In May 2020, Denton County also reported an infestation.

“They can spread outward up to 12 miles in a year, and if they are not already in the Dallas area they soon will be,” said Steve Houser, co-founder of the Texas Historic Tree Coalition and owner of Arborilogical, a tree service.

Signs of an EAB attack include thinning or dying of ash tree crowns, suckers at the base of the tree, splitting bark, D-shaped exit holes and woodpecker activity, according to the Arbor Day Foundation. 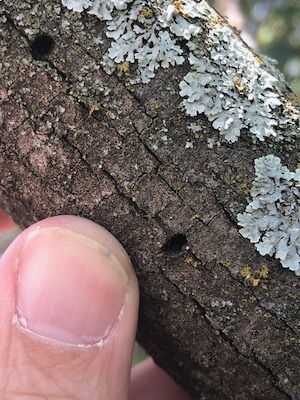 After initially feeding on ash leaves, adult beetles deposit their eggs on the tree. It is the subsequent larval stage of the EAB that ravages the ash. Legions of the thin, inch-long larvae tunnel just under the bark, feasting on vascular tissue and disrupting the tree’s ability to transport water and nutrients. The ash typically dies within four years of infestation.

The loss of significant numbers of ash trees could create a destabilizing ripple effect throughout some local ecosystems, according to Brett Johnson, senior environmental coordinator and urban biologist with the City of Dallas.

“Ash trees are fed on by over 100 species of arthropods (insects and spiders). Of these, there are over 40 species that feed exclusively on ash trees at some point in their life cycle,” Johnson said. “Lose the ash trees, lose those insects.”

“Ash trees are fed on by over 100 species of arthropods (insects and spiders). Of these, there are over 40 species that feed exclusively on ash trees at some point in their life cycle,” Johnson said. “Lose the ash trees, lose those insects.”

Many of the native boring insects are important food sources for species likes woodpeckers.

He added that increased canopy gaps from dying ash trees could speed up the establishment of invasive plants and alter the local environment.

“If you have large-scale areas of suddenly dead trees, this can potentially change the nutrient composition of the soil impacting the remaining tree species,” Johnson said.

Clusters of dead ash trees also would present a range of other hazards, including fire risk and the potential for decaying specimens to fall on people or destroy adjacent trees as they come crashing down.

The EAB is believed to have arrived in the U.S. from China by way of contaminated shipping crates. Michigan was the first state to report the bug’s presence in 2002. Its Texas debut was in April 2016, when four beetles were caught in a monitoring trap in Harrison County, according to the Texas A&M Forest Service. In addition to Tarrant, Denton and Harrison, the EAB also has turned up in Cass, Marion and Bowie counties.

Maybe the only positive news about the EAB’s arrival is its finicky palate - it feeds almost exclusively on ash trees, which are common in North Texas but not always dominant. “Compared to the Midwest, where EAB has been absolutely devastating, we have a much lower population percentage of ash trees,” said Craig Fox, city forester with the Fort Worth Park and Recreation Department. “Our [Fort Worth] population of street trees in the ash genera is about four percent. The population within parks varies by species and location, but that figure would be pretty close, as well.”

Just a few miles to the east, however, the ash densities increase markedly. In east Dallas, ash trees comprise about 15 percent of the canopy, while in Garland the figure is as high as 30 percent. The trees are even more prevalent in Dallas’ Great Trinity Forest, one of the largest urban hardwood forests in the country, where some stands of ash are dominant to the point of constituting a monoculture.

In east Dallas, ash trees comprise about 15 percent of the canopy, while in Garland the figure is as high as 30 percent. The trees are even more prevalent in Dallas’ Great Trinity Forest, one of the largest urban hardwood forests in the country, where some stands of ash are dominant to the point of constituting a monoculture.

A few sectors of the Dallas area have even higher ash compositions - up to 60 percent, according to Johnson, the Dallas environmental coordinator. Those homogenous groupings could serve to hasten the spread of EAB, potentially sparking a catastrophic infestation that could leave large swaths of dead trees.

The situation has ignited a debate on how best to head off what could become a big problem. “We cannot stop the invasion but we may be able to slow its spread to some degree by being proactive,” Houser said.

Signaling that it is taking the issue seriously, the Dallas Environment and Sustainability Committee recently agreed to establish an EAB task force. 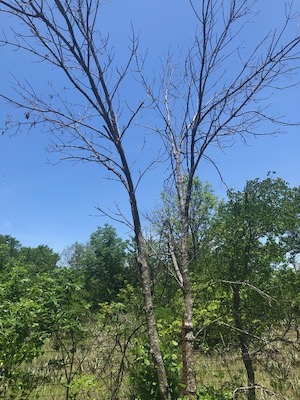 With its wealth of ash trees, the Great Trinity Forest presents both a problem and an opportunity. A successful EAB-abatement strategy there could be applied to other ash-intensive areas. One possible solution, outlined in the Great Trinity Forest Management Plan, calls for the slow, selective removal of monoculture trees that are susceptible to widespread disease or infestation. The felled trees would be replaced over time. The plan was developed by Stephen F. Austin University forest and wildlife scientists and supported by the City of Dallas Urban Forest Advisory Committee. Dallas City Council approved it in 2008, but Houser notes that it was never enacted.

“Dallas would not be facing as big of a problem if the plan had been implemented,” he said. “Forestry experts know that diversity of tree and plant species within a forest is critical to establishing and maintaining a healthy ecological balance. The more diverse the forest species, the better the forest can endure insect, pathogen or weather-related problems, and the more diverse the wildlife inhabitants.”

For now, local governments potentially affected by EAB appear to be keeping all reasonable options on the table.

“We are looking at the plan outlined by the Texas A&M Forest Service known as the SLAM (Slowing Ash Mortality) method,” Johnson said.

SLAM advocates a broad menu of therapies, used discretely or in combination, to slow or control an EAB invasion.

“The basis of any decision is based on an inventory of the trees, location and condition of the trees. Then the options come into play.”

Removing all of the ash trees preemptively is one of those options, Johnson says, but it is an approach that could cause “a number of issues,” including the removal of food and shelter for many different species. Another solution would be selective removal of ash trees that are already stressed or in poor condition – trees that would be highly attractive to the EAB.

A third alternative would involve identifying high-quality specimens of ash trees that could be treated with a special insecticide that is injected straight into the tree.

“This treatment must be repeated every couple of years. For a large forest area, this may not be a viable option, but in a residential setting it may be practical to residential property owners,” Johnson said.

Such a regimen has been implemented for two regional champion ash trees - a green ash and a Texas ash – near the EAB infestation at Fort Worth’s Eagle Mountain Lake.

“The adult beetle first feeds on an ash tree’s foliage in order to complete their maturation cycle,” said Emmett Muennink of ArborJet, a tree pest- and disease-control service. “If EAB feeds on a treated tree, it will kill the adults. At the larval stage, it feeds on the vascular system. [The insecticide] is basically 99.99 percent effective at controlling both the adult beetles and the larval stage.”

Chemical intervention does have its downside, however.

“It’s important to remember that the treatment that kills the beetle will also kill other insects which utilize the tree for food,” said Fox, the Fort Worth forester.

“It’s important to remember that the treatment that kills the beetle will also kill other insects which utilize the tree for food,” said Craig Fox, the Fort Worth forester.

Also being debated is the removal of healthy ash trees to discourage monoculture, reduce EAB infestation opportunities and provide lumber for commercial purposes before the pests attack and render the trees worthless (and potentially dangerous).

Parasitoid wasps that are natural predators of EAB are also under study. In tests conducted in  Connecticut, Massachusetts and New York, one of those wasp species, Spathius galinae, has shown relatively high levels of effectiveness controlling EAB in ash trees of up to 50 centimeters in diameter.

“Once [EAB is] detected, we will likely only have about three to five years before having a 99.7 percent mortality on ash trees,” Johnson said.