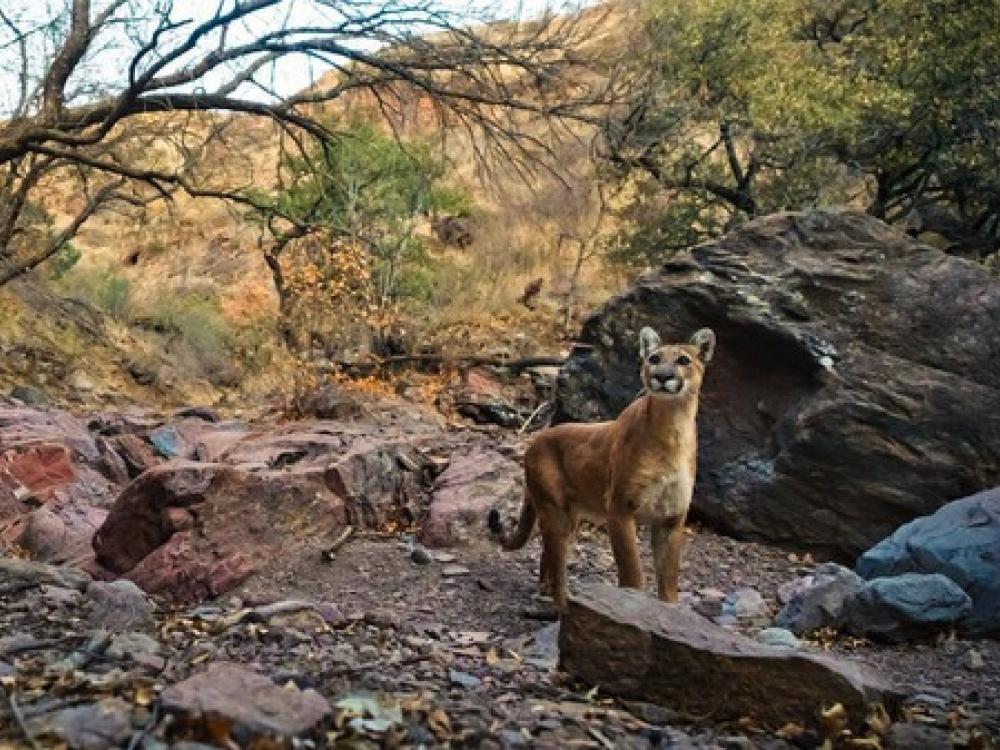 A mountain lion in the Davis Mountain examines the landscape. Courtesy of Ben Masters/Fin & Fur Films.

These iconic big cats can be shot or trapped in cages or leghold traps at any time of year. There are no limits on take and no requirement to report the number killed, referred to as harvesting, as long as the individual holds a valid Texas hunting or trapping license. Puma cubs can also be killed or trapped.

That’s why a new coalition of big cat advocates, Texans for Mountain Lions, is lobbying Texas Parks and Wildlife Department to add protections for the majestic creatures. The partnership is made up of landowners, biologists, conservationists and organizations.

Mountain lions are listed as a Species of Greatest Conservation Need by Texas Parks and Wildlife Department and ranked between Imperiled and Vulnerable.

The group says, not only can big cats be killed throughout the year, the lack of regulation allows for inhumane fates for the animals. No regulations require monitoring of traps, causing mountain lions and young to perish in traps from starvation, heat or lack of water. Some pumas chew off their appendages to free themselves from leghold traps, saving their life but severely hampering their ability to hunt or escape, and leaving them open to disease and premature death.

Mountain lions may also be trapped or injured and released into game ranches and other confined areas for canned hunts.

This dire situation is due to their designation in 1973 by the Texas Legislature as a nongame species. Texas added protections in 1977 for some nongame species but specifically excluded mountain lions.

"In the U.S., all states with breeding populations of mountain lions are managed by state wildlife agencies with regulations that protect them from unlimited killing, except in Texas," according to Texans for Mountain Lions.

Yet mountain lions are listed as a Species of Greatest Conservation Need by TPWD and ranked between Imperiled and Vulnerable. 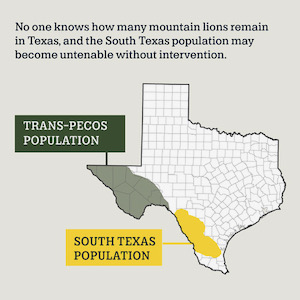 Mountain lion breeding territories in the state are limited to western and southern parts. Courtesy of Texans for Mountain Lions.

Texans for Mountain Lions is concerned that the rate of which big cats are being hunted is threatening their survival.

"During a study of 16 monitored cats in the protected landscape of Big Bend Ranch State Park, one was shot and all of the remaining 15 were killed in leghold traps when they traveled onto private lands. Another study in the Davis Mountains recorded a nearly 50 percent annual mortality, almost entirely due to trapping," the group says.

On June 13, the Texans for Mountain Lions working group submitted a petition for rulemaking to TPWD on behalf of pumas with the following requests:

•    Conduct current research to identify the population size, status, and distribution of mountain lions in Texas.
•    Require harvest reporting.
•    Require 36-hour trap check times, consistent with furbearer trapping regulations.
•    Limit harvest in South Texas to five or fewer mountain lions annually until TPWD can determine the population size and status in that area and establish sustainable hunting limits.
•    Prohibit canned hunting of mountain lions (i.e., killing lions that have been restricted from movement through capture or injury and then released in an enclosed area to be killed).
•    Form a stakeholder advisory group that will collaborate with TPWD to establish a management plan for mountain lions in Texas.

TPWD can either deny the petition or put it on an upcoming Texas Parks and Wildlife Commission agenda scheduled for Aug. 24-25.

In addition, Texans for Mountain Lions is urging all supporters of mountain lions in Texas to visit their Take Action page and send a letter of support for this action. 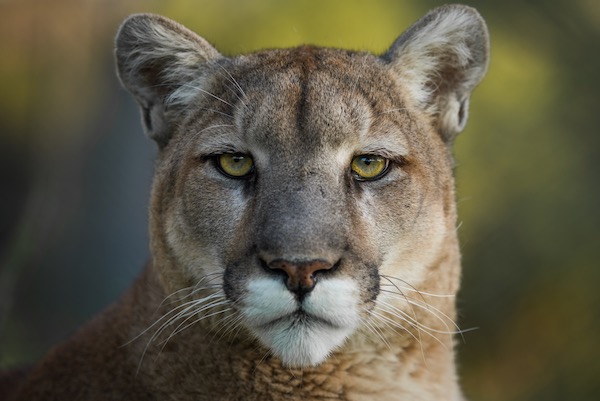 BIG CATS ON THE BIG SCREEN

Footage of pumas and explanation of their peril in the recent film on Texas wildlife, Deep in the Heart exponentially raised public concern over the big cat.

Filmmaker Ben Masters, a member of the Texans for Mountain Lions working group, first turned his lens on pumas in the short film Lions of West Texas, which followed researchers from the Borderlands Research Institute at Sul Ross State University.

"Action should be taken to ensure a future for our mountain lions in Texas,” said Masters in a statement. “Mountain lions are an iconic wildlife species in Texas. Without any science or a management plan, mountain lion populations in some areas of the state may not be viable into the future."

Masters said he strongly believes this can be done while respecting the ranching and hunting heritage that is the foundation for wildlife conservation in Texas.

“As our population continues to increase and our landscapes continue to subdivide, we need to make sure there is data-driven management to ensure a future for these cats."

WHY NORTH TEXANS SHOULD PRESERVE PUMAS

The only breeding populations of pumas in Texas exist in the Davis Mountains in West Texas and the South Texas brush country. But young males have ventured into North Texas. The last sighting was on the east side of Lake Lavon in December 2020. After extensive news and social media coverage, the animal was shot and killed by a hunter.

The Dallas Morning News stated, "The beautiful, silent animal that slipped past the trail camera in Rowlett surely deserves better from us than that." 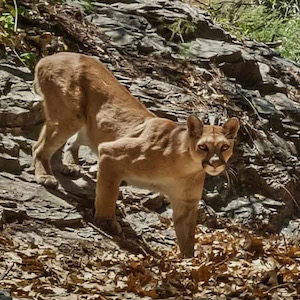 "Mountain lions, however, are a controversial species, because they pose real and perceived risks to pets, livestock and occasionally people. These risks are very small and can be further reduced by taking precautions when recreating outside and protecting our livestock."

Morrison points out that mountain lions have beneficial role in the ecosystem.

"Mountain lions regulate prey and medium carnivore species, and may also reduce the spread of chronic wasting disease in ungulate herds, a critical topic in Texas and beyond."

Referring to the TPWD petition, Morrison admits that the proposed six regulations or directives on the petition would not have prevented the death of the mountain lion outside Dallas.

“Rather, they lay the groundwork for the future of this cat,” she said. "At one time, mountain lions existed throughout the country and across Texas. We have expertly hemmed in so much of the natural world.”

Leaving nature lovers to ask: Are we willing to let go of this iconic part of our natural heritage? 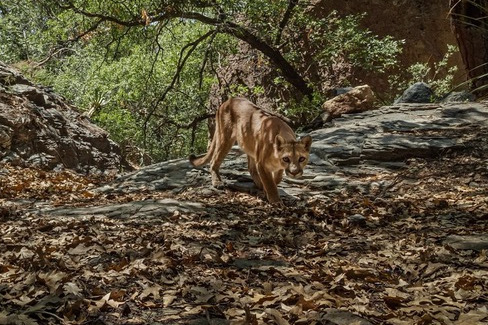 A mountain lion paces through the Davis Mountain forest. Courtesy of Deep in the Heart Film.

Texans for Mountain Lions is urging all supporters of mountain lions in Texas to visit their Take Action page and send a letter of support for this action. Please add your personal comments to the letter provided.

Texas Mountain Lions will send your letter to the offices of five statewide elected officials, your state representative and senator and two top TPWD officials.

Be sure to fill in the contact information blanks, or the letter can't be counted or sent to your state representative and senator.

Mountain lion enthusiasts can also visit the Support page at Texans for Mountain Lions for information on amplifying your concern statements by contacting TPWD directly or speaking at a TPWD commissioners meeting.

Deep in the Heart' is love letter to Texas wildlife