The four most common lizards in North Texas 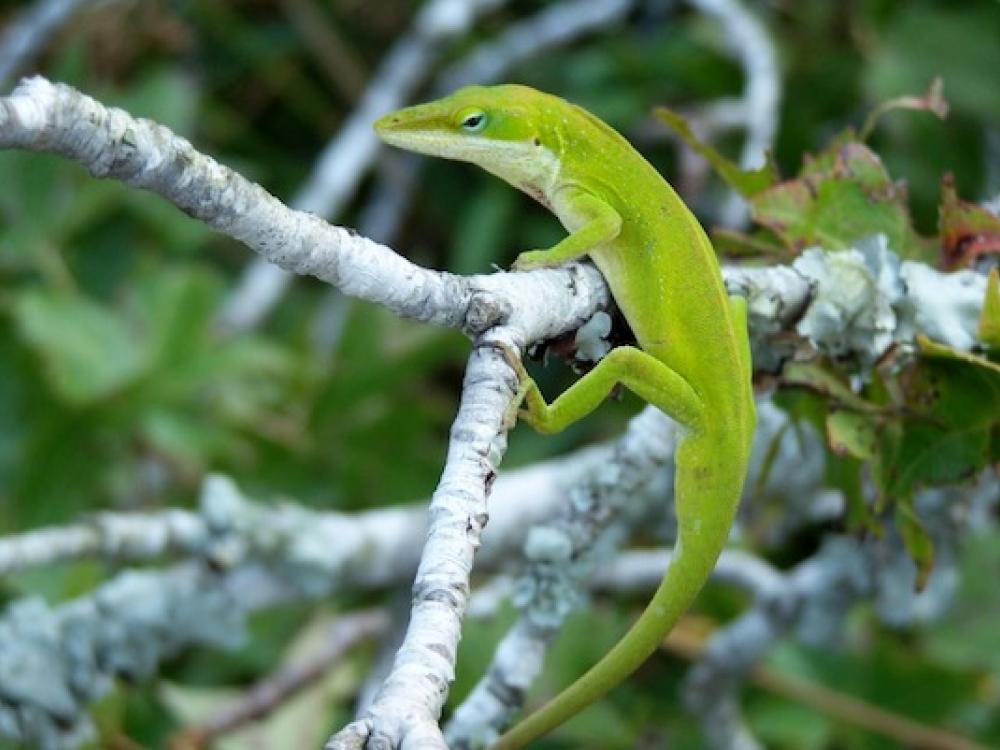 With the warmer days of spring here, lizards are coming out hibernation and starting to appear on houses, trees and fences, and under last year’s leaves. These little reptiles add splashes of color to our yards and gardens, and they offer fascinating behaviors and acrobatics for the urban naturalist.

There is even a legless lizard in North Texas! Why isn’t it a snake? The reasons include these legless lizards have very different jaw structures than snakes, they have eyelids that close, and they have external ear openings.

We have been fortunate to have 16 species of lizards in Dallas and Tarrant Counties, although a few of them like the Texas horned lizard, have disappeared. Let’s take a look at four of the most common ones we see. 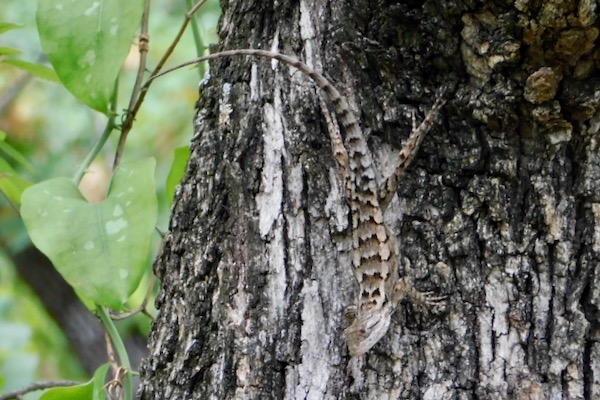 A Texas spiny lizard in a tree, in the typical ambush position. Photo by Michael Smith.

The Texas spiny lizard is often seen on tree trunks hanging motionless, head pointed downward like a spiky gargoyle. It may be hard to see, with its pattern of browns and grays and large spiny scales mimicking the tree trunk.

It’s a big lizard, and big females can measure a little under a foot long. Most of that length is tail, but the head and body can be more than four inches long.

Hanging on to tree bark with little recurved claws allows it to scan the ground and ambush the insects that it eats. The lizard darts down to the ground, grabs the cricket or other insect, and runs back up into the tree to finish eating. You can easily watch one from a little distance. If you try to sneak up on a Texas spiny lizard, it scampers up the tree or around the trunk to the other side. Their speed and agility climbing vertically is very impressive.

Because of their rough spines, from time to time, someone mistakes one of these lizards for a horny toad (Texas horned lizard). Just remember that horned lizards are fairly flattened with short tails, and they stay on the ground where they can find ants. Texas spiny lizards don’t have horns on their heads. They are acrobatic tree climbers, and they have long tails. There is also some confusion between spiny lizards and “fence lizards,” which look like miniature Texas spiny lizards. The fence lizard that is occasionally found here has small, pointed scales that are smaller and less spiny than those of its cousin. 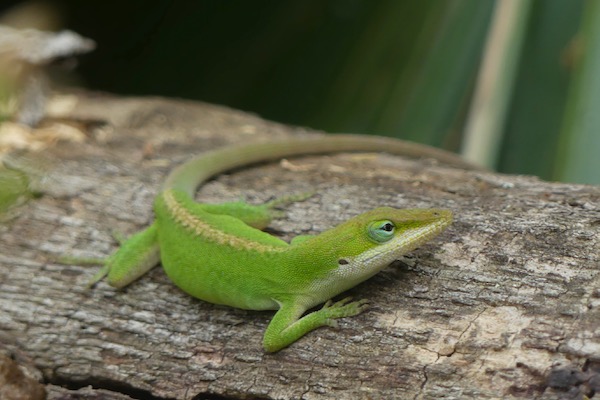 Another familiar lizard that blends in to its surroundings, sometimes with leaves and vines because of its bright green coloration, is the green anole. Green anoles have small, compact scales that make their skin look soft and velvety. Those scales can be bright green but can change to brown if the lizard is stressed or cold.

How can that happen? Green anoles have layers of pigmented cells within those scales, some of which reflect light back as green, but the darker melanophores will make the lizard’s scales dark. 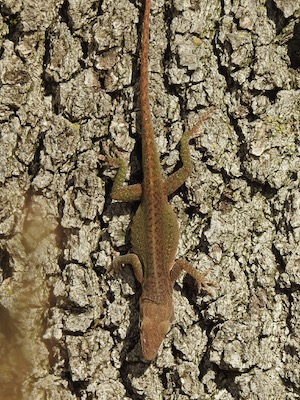 A green anole in transition between colors - some scales contain more green and some more brown. Photo by Meghan Cassidy.

When those hormone-controlled melanophores move toward the surface, they block the other cells and sunlight is reflected as brown. This does not happen for camouflage purposes – a stressed anole might look brown even while sitting on green leaves. If you discover one under a log or other winter hiding place when it is cold, the lizard is always brown.

Green anoles grow up to about eight inches in length, and they have a long, tapering snout. Males are territorial and will extend a pink fold of skin down from the throat, a sort of vertical fan called a “dewlap.” They use this display in courtship and to assert their dominance with other males. At the same time, they may bob their heads up and down or do “push-ups” to try to show who is the boss, and they will occasionally do this when a human observer gets close. Parents of middle-schoolers might smile if they notice a little bit of similarity to the ways some teens signal who is coolest or toughest.

In our state, the wetter Piney Woods is the stronghold of the green anole. They survive in the dry habitats further west by using places with more moisture and vegetation, near creeks, rivers and lakes – or our backyards. Somewhere toward the center of the state is the limit, however, and in North Texas they don’t seem to be found west of Tarrant County.

There is an introduced brown anole (a different species, not just a brown-colored one) that is turning up in a few parts of East and South Texas, but there are only a few reports in iNaturalist of it showing up in the DFW area. 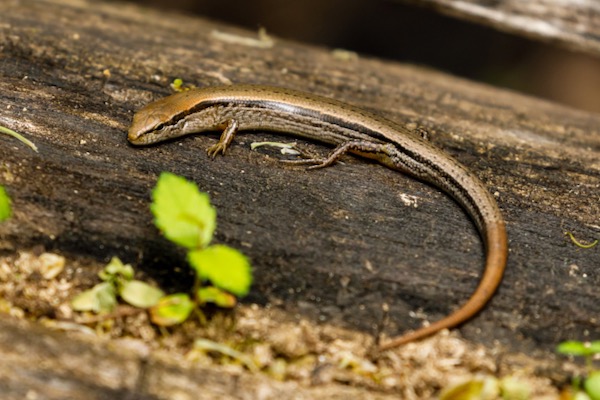 Our next lizard takes us from the trees and bushes to the ground. There is a group of lizards with smooth, shiny scales and small legs – they are called “skinks.”

One of the smallest is named the little brown skink or ground skink. Even a big one is less than six inches total length, and much of the lizard’s length is its tail. Because its legs are small, it seems to “swim” through fallen leaves and soil looking almost like a snake. Its back is a coppery brown, with a broad, dark stripe on either side.

Little brown skinks live on the woodland floor where a layer of fallen leaves tends to cover the soil. You might see one in a wooded park or in a backyard next to a wooded area. Sometimes a slight sound and disturbance of the leaf litter draws our attention to a little brown skink on the move.

These little lizards eat very small invertebrates and in turn they are preyed upon by a variety of other animals. Sometimes a skink that is under attack by a bird or snake will escape by allowing its tail to break off, leaving a would-be predator with a wiggling tail while its owner gets away.

Like many other lizards, little brown skinks can grow a new tail, though its appearance and structure will be a little different. Unfortunately, losing the tail puts the skink at a disadvantage, with research showing that the lizard will not run as fast or as far if it is chased. All the more reason to admire it from a distance, because the tails often break when humans capture them. 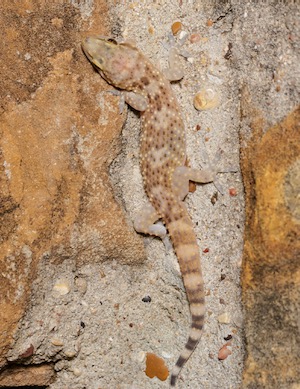 The last of our four common lizards is not native to the U.S.

Introduced species are a concern because they can out-compete or harm native species of plants and animals.

The Mediterranean gecko is reported to have been brought to the U.S. in cargo ships. In Texas it probably arrived in Brownsville in 1950.

Fortunately, it seems the species has not done any harm that we are aware of and is well established in much of Texas outside the Panhandle.

These geckos do best near human structures, although I remember finding one along the Pecos River, far from any sizable town.

This is a small lizard that grows to about five inches total length and has large, lidless eyes with vertically elliptical pupils (like those of a cat, but weird, like an alien cat). Mediterranean geckos have bumpy skin and a mottled pattern that becomes banded on the tail. They generally hide during the day and become active at night, often clinging to the walls of a house and eating insects that are attracted to porch lights. 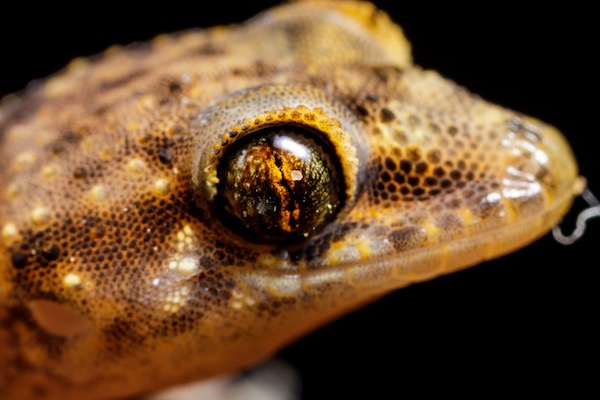 Close up of a Mediterranean gecko eye, showing the unusual pupil shape. Photo by Meghan Cassidy.

Like birds, these lizards bring interest and charm to our backyards, and they won’t fly away (though they may run and hide). In fact, they might take up residence as familiar faces on the trees or in the garden, as long as you avoid pesticides and keep cats indoors.

Some people give a name to a backyard lizard and enjoy watching him hunt for insects or assert his ownership of his patch of your yard when another lizard comes close. They will also add a little insect control to your garden.

None of them will hurt you. My suggestion is that you don’t try to catch them, primarily because of the chance that you will accidentally break its tail off. They can grow a new tail, but it doesn’t look the same, and as mentioned in the discussion of the little brown skink, it puts the lizard at a disadvantage.

Where can you go for more information? A field guide that I use is by Troy and Toby Hibbitts titled Texas Lizards: A Field Guide, published in 2015 by University of Texas Press.