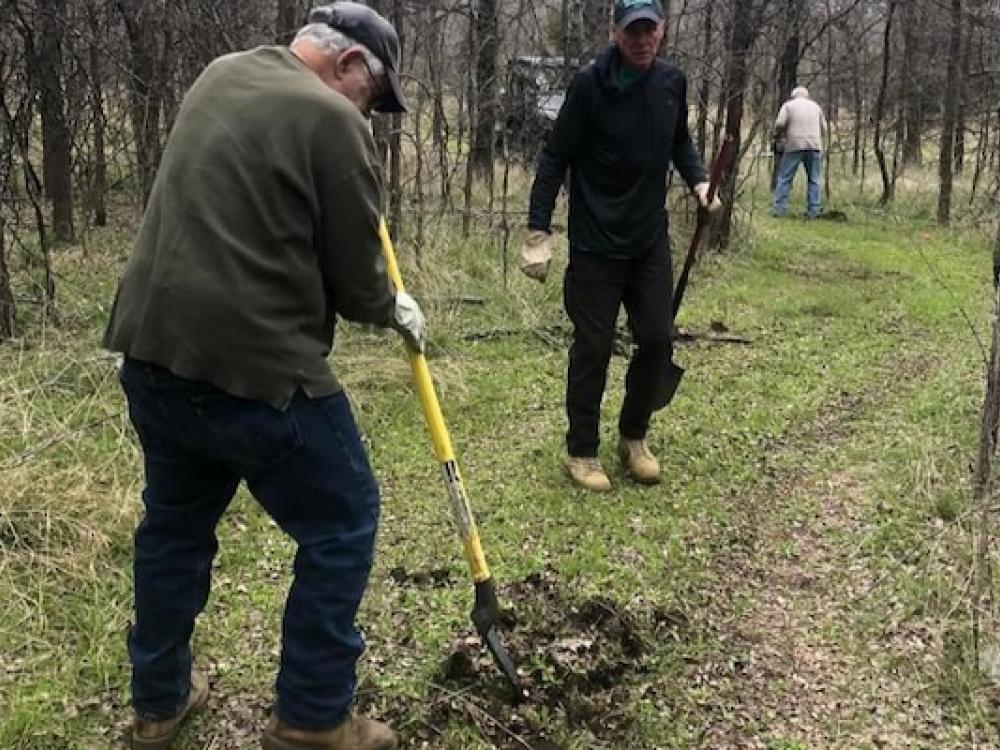 Volunteers Harley Shephardson, front, and Jerry Hamby remove stumps on the new Stewart Creek Trail, which will be opened for the trail run at Lewisville Lake Environmental Learning Area on April 23. Photo courtesy of Scott Kiester.

Good news for runners who enjoy dashing down dirt paths.

Lewisville Lake Environmental Learning Area is bringing back its trail run after an 8-year hiatus.

The event, hosted by Friends of LLELA, will be held April 23 at the 2,600-acre nature preserve in Lewisville.

There are two runs – The Woods and Wetlands 6K+, a 4-mile trek through bottomland hardwood forest, and the Earth Day Dash, a one-mile fun run through primitive campground sites among the cottonwoods and pecan trees.

“It has been a major fundraiser for us in the past,” he said. “It allowed us to buy the four-wheel cart that we use everyday.”

The history of LLELA goes back to 1955, when the Lewisville Lake Dam was completed. More than 2,000 acres below the dam were set aside for flood control by the federal government. After landowners were bought out, the land was left idle.

In the early 1990s, a coalition from the U.S. Army Corps of Engineers, the University of North Texas, the City of Lewisville, Lewisville ISD, the University of Texas in Arlington, and Texas A&M Agrilife Extension recognized the potential of the land’s use as a public nature preserve.

The Friends of LLELA group was formed in 2013. In 2014, the City of Lewisville, the University of North Texas and the Lewisville Independent School District partnered to create a plan for the park with the approval and cooperation of the U.S. Army Corps of Engineers.

Since then, volunteers and staff have worked to restore the land’s original ecosystem while providing recreational and educational opportunities to the public. UNT students also use the preserve to conduct research projects.

Those who join the 6K run next month will be among the first to traverse the new Stewart Creek Trail. Although the Friends group is still waiting on final approval to open the trail for daily use, USACE has given the green light to use the trail for the run.

“The final documents and plats for the trail have been submitted to the Corps for review and we expect to hear back from them about approval to open the trial in a next few months,” said Kiester.

Kiester said there will be a clock so that runners can check their times but the run won’t be treated as a race.

“We’re appealing to the cross country and the trail runners,” he said. “The point is to get people out to LLELA and get some fresh air and a little exercise.”

There will also be snacks, environmental activities for kids and educational booths.

All run participants will receive a T-shirt and a wooden finishers medallion, which Kiester touted as biodegradable, should runners decide to part with it later.

“You can throw them in the compost,” joked Kiester.

About: For the first time since 2014, the Friends of LLELA is hosting a trail run. There is a 6K+ and a one-mile fun run. The fun run route is suitable for wheel chairs with trail tires.

Where: The run is at LLELA, but note, there will be no parking for runners there. Participants must park at DCTA stations — the Old Town station or the Highland Village station — where shuttles will take participants to LLELA.

Cost: The Woods and Wetlands 6K+ run is $45 to register. The Earth Day Dash is $25. Register online or at the race, the day of the event. Just take the shuttle at one of the two pickup locations to the run.