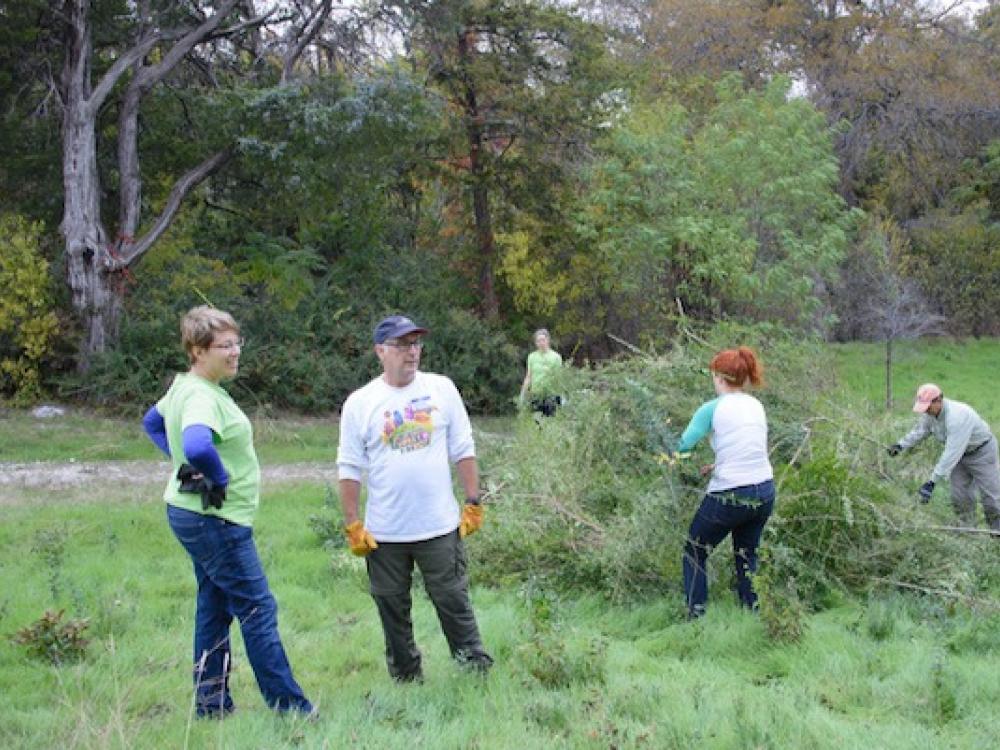 To the untrained hiker, privet is a cheery sign of spring on the trail. But to those who care for our natural areas in DFW, it’s a formidable foe.

"There's a greenbelt in my town,” said naturalist and native plant expert Carol Clark. “The trail seems green, leafy and inviting at first, but as you walk in, you realize because the privet grows so densely that there is no place to put a foot down anywhere but on the path.”

And it's all surrounded by dead silence, says Clark.

“No buzzing of insects, no flutters of wings, no birdsong. There are no small scurryings, no animals in sight. There is nothing here but privet."

"It's a green wasteland." 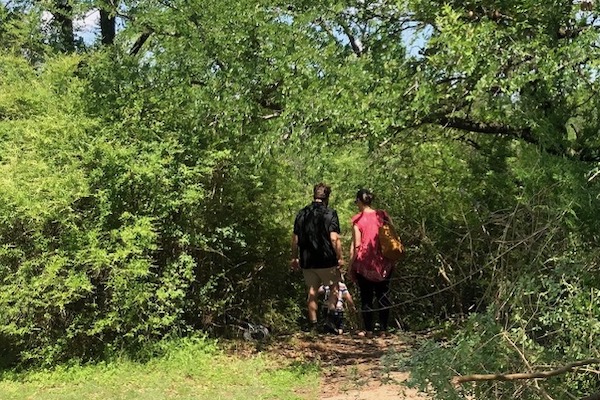 Hikers try to find the trail amid profuse Chinese privet at Tillery Park in Fort Worth. Photo by Jo Ann Thomas Collins.

In late winter and early spring when deciduous trees and shrubs are bare of leaves, privet stands out. Its glossy green foliage overwhelmingly dominates the woods in parks and preserves.

It's a huge issue for park managers and volunteers who maintain natural areas.

Chinese privet consumes over 2.5 million forest acres across southern states, according to the U.S. Department of Agriculture. A quick scan of AllTrails and Google Maps comments shows that privet is second only to litter in complaints.

Various privet species were brought to the U.S. in the late 1700s and early 1800s as evergreen landscape shrubs. The plant soon escaped cultivation.

Now it's a multi menace.

Profuse berries create ever-spreading swaths of crowded shrubs, especially thick along rivers and creeks where stormwaters spread berries. Vigorous roots enable the plant to spring back manically after being cut down. 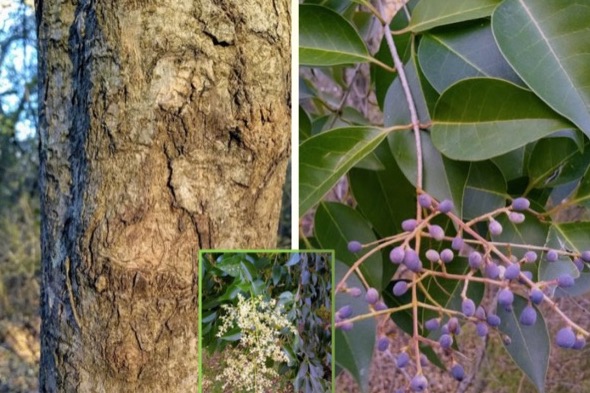 In North Texas, privet's a triple threat, with each species filling a niche that creates 100 percent coverage from ground to canopy: 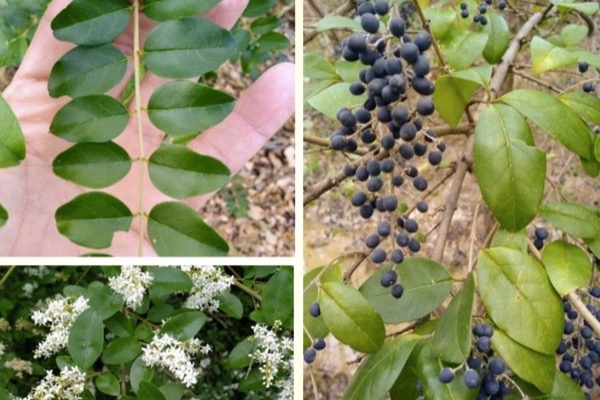 The USDA and Texas Department of Agriculture list all three species as noxious weeds. Some states such as New York and Tennessee prohibit sales of certain privet species. Not Texas, of course, even though they take top spots on the Texas Invasives hit list.

“From my experience, privet is by far the most significant invasive tree issue in DFW,” said Rick Travis, a tree instructor with Blackland Prairie Texas Master Naturalists. “Realistically speaking, privets are so pervasive in urban areas, one should think control versus eradication. I recommend removal in areas where they're present but haven't begun pushing out the natives.” 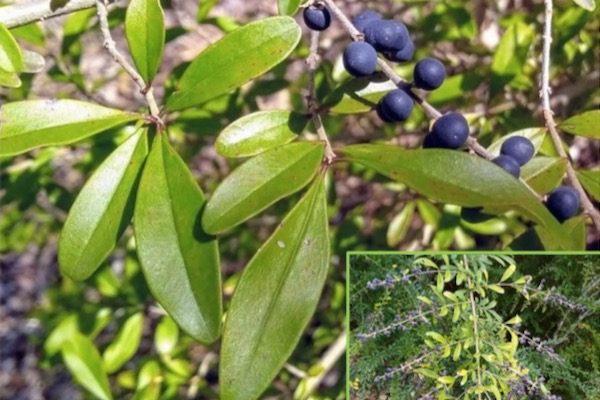 THE TROUBLE WITH INVASIVES

Why is privet a problem? Due to the lack of disease and predation that kept them in check in their homeland, invasives like privet outcompete native species. Extremely adaptable, invasives grow fast and mature early, producing profuse seeds and rhizomes that spread quickly.

As a result, privet forms monocultures, displacing native plant species that wildlife has depended on for food and shelter for many centuries. Biodiversity needed for functional ecology plummets. Wherever privet is permanently removed, diversity roars back. 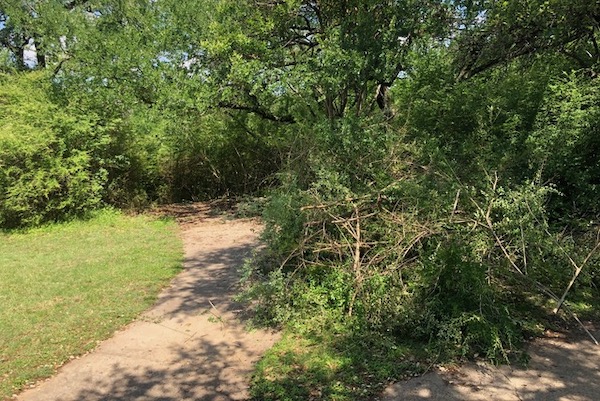 But some people resist removing it. They like its pretty flowers. Others think the thickets of privet-choked trees make good habitat. But when temps are over 80 degrees, which is much of the time in Texas, privet transpires 30 percent more water vapor than other shrubs, making the thickets unbearably humid even for wildlife.

"A person who wants to argue that privet is a valuable part of our 'novel ecosystem' is better versed in philosophy and debate than he is in biology and ecology," says Clark.

GETTING RID OF PRIVET

Without a broad and determined eradication campaign by municipal entities that oversee public lands, privet and its invasive pals like Amur honeysuckle and nandina will eventually dominate. Hiking paths will become consumed. Wildlife and birds will dwindle. Generally, only insects do well among invasives.

The best method to remove privet is yanking it out of the ground. Foot-operated weed wrenches and stump pullers such as the Extractigator work on trunks half to one inch in diameter.

But Freiheit points out their shortcomings.

"They can snap the roots off and then those regrow. I can tell that because of the way the plants grow — like really strong on one side."

For larger privet in accessible areas, Freiheit chains the plant to a large truck and lets the vehicle do the yanking.

Thanks to a recent Texas-New Mexico Power and Light grant, the Friends of LLELA acquired several new tools. One is similar to a weed trimmer but with a circular saw blade on the end that slays privet quickly. 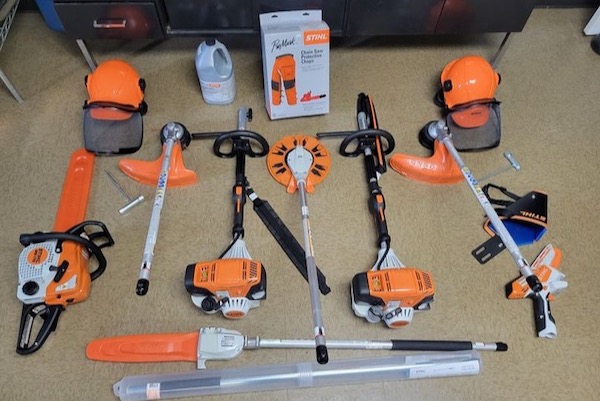 Chainsaws work in privet cutting. They range from lightweight battery-powered ones for medium plants to big gas-powered models for large glossy privets. But many park departments and preserve management don't allow non-staff to use power tools. Instead, volunteers must use pruning loppers — tedious but accurate. Loppers on poles work well on one-inch and smaller privets and it’s easier on the back.

Places where privet thickets cover large areas may call for forestry mulchers. This is like a gigantic lawnmower on a power arm that shreds plants down to their roots. However, while the thick carpet of mulch produced suppresses privet sprouts, it also suppresses beneficial plants, and privet trunks often sprout back. And unless trained in native plants, the mulcher operator may shred beneficial natives. Goats similarly eat privet down to the nubs and sometimes chew the wrong plants.

Freiheit said the main tools for privet are human power and persistance.

“The first goal is to stop berry production. Once the existing stand in an area is cleared, you will have seed germination. But it takes a few years for them to mature enough to bloom and berry. You keep removing sprouts until the privet seed bank has been exhausted." 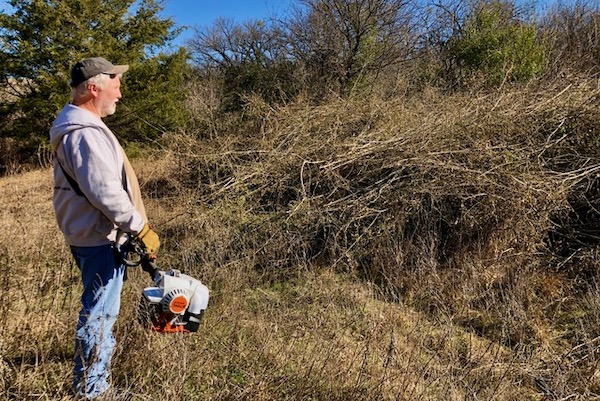 Richard Freiheit admires a pile of cut Chinese privet to be burned at LLELA. Photo by Amy Martin.

THE NECESSITY OF HERBICIDES

But eradicating privet has an aggravating tendency: cut one trunk and five will sucker back. Repeating cutting also creates an aggressive root system.

Nobody likes hearing the solution: cut trunks must be treated with herbicide that reaches the roots.

Triclopyr, an herbicide for brush, will kill the plant but persists in the ground for many years. Roundup glyphosate concentrate works as well and degrades much faster. 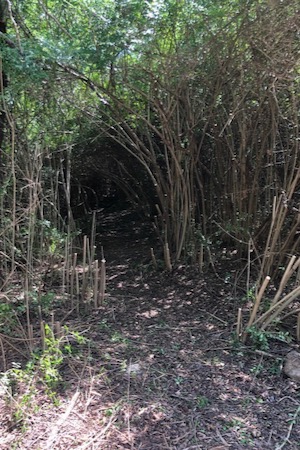 Privet lopped by volunteers was later treated with herbicide by Fort Worth park employees. Photo by Jo Ann Thomas Collins.

Both must be painstakingly applied so that herbicide does not drip onto the soil or desirable plants. For best results, apply herbicides within five minutes of cutting. The LLELA team utilizes empty non-dairy creamer shakers with thin paintbrushes stuck through shaker holes in the top. Glyphosate concentrate at the container bottom has a syrup-like consistency that doesn't drip.

But park departments generally don't allow volunteers to use herbicide, even if they have a applicator’s license. In those cases, volunteers cut the privet leaving significant stumps, and municipal employees follow-up later, re-cutting the trunks lower and applying herbicide.

The studies on herbicides, especially glyphosates, can be alarming. But those studies are on foliar applications involving gallons and gallons of herbicides wantonly sprayed, usually in agricultural or municipal operations. These volunteers are using daubs of herbicide applied with precision. 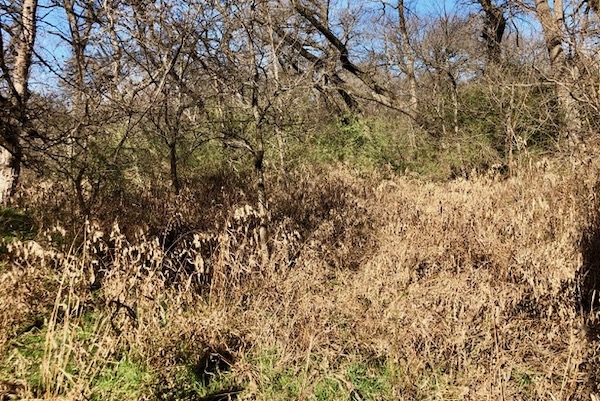 "From this point on, it used to be solid privet," says Freiheit. "See that tree branch? That's how tall the privet was."

I'm standing with Freiheit and Scott Kiester, the Texas Master Naturalist project manager for LLELA, in a wooded area off Fish Hatchery Road. A breeze slips through the trees, causing the dangling seedheads of inland sea oats to shimmy. Cedar elm trunks soar, along with a smattering of green ash and red oak.

Freiheit outlined what it takes to regain a healthy forest.

"It was nothing but privet," says Freiheit, "so no one could do anything wrong. We even had Cub Scouts and their parents out here." 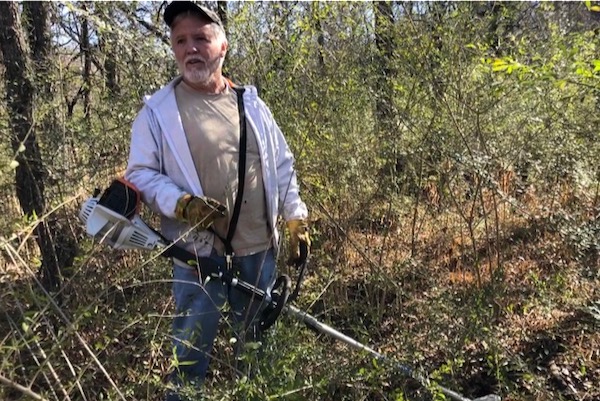 But on the edge of this beautiful patch of woods, the menace of privet asserts itself, casting the area in darkness. Freiheit fires up his new weedeater-style circular saw with a roar and plows into the privet. A crescendo of slender trunks falls to the ground.

We wander deeper into the forest, and a sea of cut and treated privet stems spreads down to a wet-weather creek. It’s the effort of Haley, a UNT ecology student, who enjoyed a privet workday out here so much, she returned and continued on her own.

"Haley's a ball of fire," says Kiester. "Lots of energy, lots of enthusiasm."

"I have found that over the years that volunteers love pulling privet because they have the instant gratification of seeing the area they just cleared," notes Freiheit.

Volunteers are the key to beating back the privet, he said. 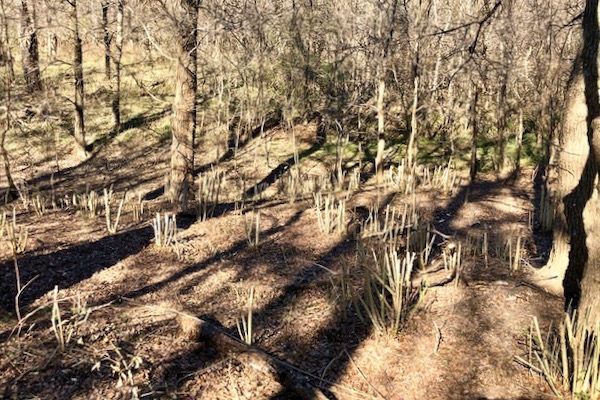 The tangled branches of a leaning bois d'arc nearby create a work of natural art. Three feet in diameter at the base, the tree thrived here a hundred years ago before the privet onslaught began. Now, it will continue to live, free of privet, raccoon den at its base, producing horse apples from which squirrels dig nutritious seeds. This is what privet victory looks like.

“We are fortunate to be able to burn regularly, so our privet goes up in smoke via brush piles."

Larger privet can be strategically stacked to make brush piles for songbird and small mammal habitats.

Once privet is gone, the sudden rush of sunlight to the soil encourages fallen berries to sprout. A carpet of baby privet arises. Volunteers have been experimenting with corn gluten meal to see if it suppresses berry germination. Or if very young sprouts will die when sprayed with horticultural vinegar.

"LLELA will, at some time, consider the possibility of running low-intensity fires through the forest understory as another way to eliminate young privet seedlings," said Freiheit.

Species of fungi in the Trametes genus have lignin-degrading enzymes and are under investigation for their ability to decompose privet stumps and roots. Trametes versicolor is commonly called turkey tail.

Other ideas: Repeated hand tilling of privet-seedling soil until there's nothing left to sprout. Mulching with six-inch thick mulch suppresses privet germination, but also any native seeds. And privet berries can last decades in the soil.

But once you deplete privet seed banks, new plants must come in.

"We have been highly successful overseeding with inland sea oats and hope to increase species diversity in time," said Freiheit. 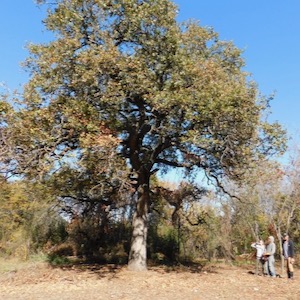 Volunteers with Friends of Sheri Capeheart Nature Preserve in Arlington freed a large post oak, that had been engulfed by privet. See before photo. Photo by Jim Frisinger.

Staff and volunteers at seven parks and preserves in North Texas are determined to thwart privet dominance. Read about their successes and unique challenges.

Local success stories in the fight against privet