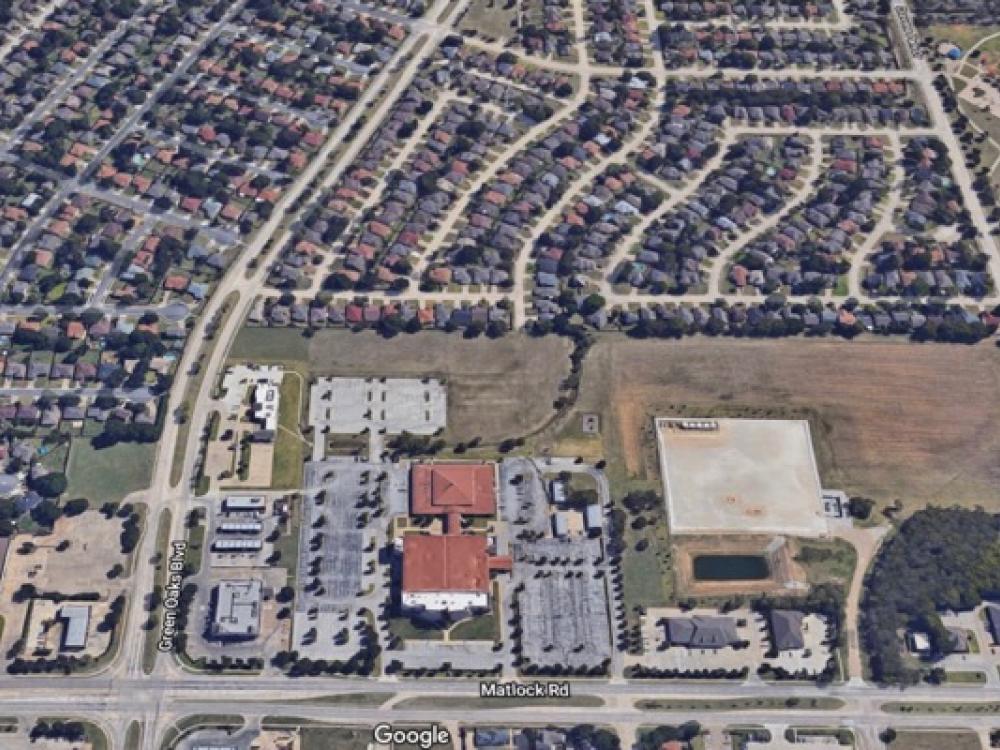 An aerial street view shows the homes and businesses adjacent to site at 5427 Matlock Road in Arlington where a driller wants to undercut the 600-foot setback rule. Courtesy of Liveable Arlington.

That’s why the leader of Liveable Arlington, a three-year-old clean air and water advocacy group, is speaking out against a gas driller's request to waive the city’s 600-foot setback rule.

Total E&P Barnett USA oil has applied for a Special Use Permit to drill within 319 feet of homes and businesses in southeast Arlington.

The city's Planning and Zoning Commission recommended approval for the permit in January. The Arlington City Council is expected to vote on it next week. 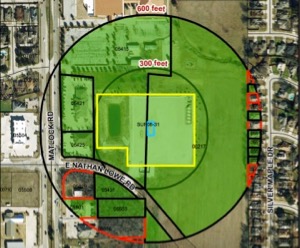 Properties outlined in red have not given to consent to drill within 319 feet of their home. Courtesy of city of Arlington.

There are already three wells on the 4-plus-acre tract at 5427 Matlock Road where Total wants to drill three more wells. Their site plan shows that the drill zone does not meet the minimum 600-foot setback requirement for protected uses as required by the city’s Gas Drilling & Production Ordinance. However, the law allows the setback distance to be reduced by the City Council to as little as 300 feet.

The setback waiver is commonly requested. There are 351 gas wells in Arlington on 56 sites. According to Jessica Youngblood, gas well coordinator for the city of Arlington, 13 of 16 sites that applied for gas drilling permits since 2011, received waivers to drill under the 600 foot setback rule.

In the most recent case, because the applicant only has consent of 58 percent of the property owners, reducing the setback also requires at least seven City Council members to vote for it.

Bhandari hopes to win a few of those votes over to her side.

Last year, Bhandari led a successful campaign, with help from a DFW-based coalition of environmental groups, to stop Bluestone Natural Resources from putting an injection well next to Lake Arlington.

Last month, when she spotted Total’s request on a City Council agenda, she was alarmed.

“We’ve had a slow down in gas drilling but it seems to be starting back up,” she said.

Now she is rallying Arlington residents to oppose any reductions from the city’s required 600 feet. She’s started an online petition and is enlisting residents to speak at next week’s city council meeting.

“We wanted to make an issue out of it because we wanted the city government to know we’re aware of what they’re doing.”

According to Bhandari, the proposed plan is unwise given all that has been discovered in recent years about the dangers of gas drilling.

Dr. Anne Epstein, an internal medicine specialist and a member of the Lubbock Board of Health, has been researching the effects of gas drilling on human health. In her 2017 paper on The Human Health Implications of Oil and Natural Gas Development published on ScienceDirect.com, she states that:

“The oil and gas sector is the largest industrial source of volatile organic compounds, which are dangerous because they include hazardous air pollutants, such as the carcinogen benzene; and because they are precursors to ozone, which is also hazardous to health.”

Bhandari said she hopes at least of a few of Arlington council members will turn the proposal down.

“They themselves are aware of the risks. It’s their responsibility to uphold the rules and regulations in Arlington.” said Bhandari. "Not only will our children pay a health price for the emissions they are exposed to, they will also face the climate consequences for the rest of their lives."

About: Liveable Arlington is urging Arlington City Council to deny a request by Total E&P Barnett USA oil to drill within 319 feet of homes and businesses.