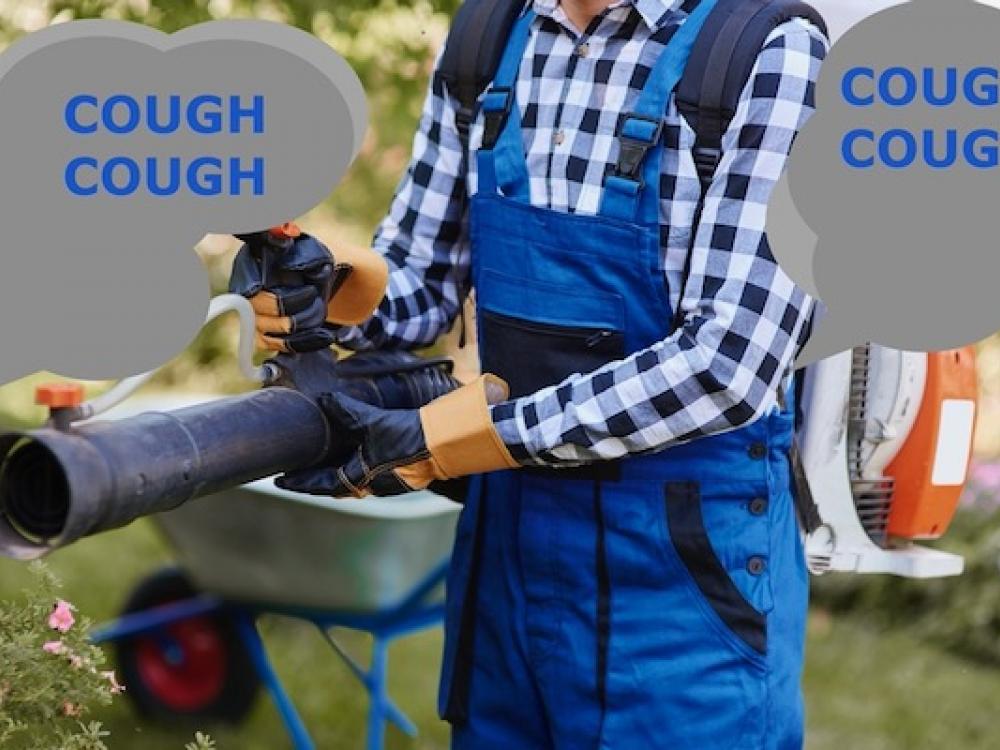 At the crack of dawn, mower-and-blower-toting armies push into our neighborhood like a 21st-century D-Day invasion. This militia’s equivalent of an atomic bomb – the gasoline-powered leaf blower -- blasts a cacophonous hole in the peaceful morning.

Derisively called the “lawn bazooka,” its earsplitting drone rises and falls like the cry of a wounded wildebeest, or as one observer noted, “the bastard offspring of bagpipes and an air-raid siren.”

I plug my ears, stagger outside to retrieve the newspaper and wade into a thickly perfumed blue haze, the noxious signature of two-stroke engine exhaust.

Coffee on the patio? Not in the middle of this maelstrom.

Loud, smelly and dirty, gas-powered leaf blowers are now forbidden or sharply restricted in about 100 U.S. cities, where folks finally got fed up with the racket and fumes. I’ve had it, too. So, I call out from my suburban rooftop: Ban the (gasoline-powered) blower!

The primitive and smoggy two-stroke engine (named because it takes just two strokes of a piston to complete the combustion cycle, compared with four strokes for a car engine) is the boisterous beating heart of most leaf blowers. Crude but nearly indestructible, two-strokes require a mixture of lubricating oil and gasoline.

Only about 75 percent of that unctuous brew ignites after it’s drawn into the combustion chamber. The rest is expelled as a concentrated hydrocarbon aerosol that hovers over the ’hood like a stinky ghost.

Only about 75 percent of that unctuous brew ignites after it’s drawn into the combustion chamber. The rest is expelled as a concentrated hydrocarbon aerosol that hovers over the ’hood like a stinky ghost.

It’s more than an annoyance. One study found that a commercial-grade two-stroke leaf blower produces more pollution than a three-ton pickup truck, including 23 times more carbon monoxide. The little motor’s accompanying din can rival that of a jet plane taking off.

This accretion of offenses can take its toll on hearing and health. Manufacturers claim they’re making quieter ones now. I’ll have to take their word for it because my ears continue to tell a horror story.

All of these noisemakers could be replaced right now by a new generation of exhaust-free and relatively quiet battery-electric blowers. After years of steady development and battery-tech advances, their performance now overlaps that of gas-powered equipment.

I started seeing the light about 12 years ago when my wife and daughter bought me a cordless electric lawnmower for Father’s Day. To my surprise, it did our whole one-third-acre yard on a single charge. Our gas mower sat rusting in the shed until I finally gave it away. In the interim I acquired a battery weed trimmer, superior in every way to the gas trimmer it replaced. Now I have my eye on a cordless blower.

None of this equipment is silent, but the noise levels are much, much lower, and the electrics lack the two-cycle’s low-frequency buzz that tends to carry farther. They’re also odor-free.

Cities can’t regulate blowers’ hydrocarbon emissions – that’s the EPA’s job – but we can address the noise. Highland Park already has switched to battery-electric blowers for park maintenance. Likewise, Dallas City Council appears to be on the verge of phasing out gas leaf blowers in the city, and has been using battery-electric ones downtown successfully for three years. A Change.org petition seeks to ban the blowers throughout DFW. Fort Worth’s noise ordinance, which limits residential sound levels to 60 decibels between 10 p.m. and 7 a.m., and 70 decibels the rest of the time, makes no mention of lawncare equipment. Meanwhile, similar-size cities are making their move: a blower prohibition approved by Washington, D.C., in 2018 took effect this year.

A blower prohibition approved by Washington, D.C., in 2018 took effect this year.

We’re entitled to reclaim our mornings and afternoons — and our own patios — while ensuring that hardworking yard crews stay in business and avoid financial hardship. How to do that? North Texas cities could start by restricting the use of gas-powered blowers to midday hours, while initiating a phase-out that leads to a ban in, say, five years.

Grant money and partnering opportunities with manufacturers could provide attractive incentives for yard-care businesses to purchase new battery-electric blowers and similar gear. At the same time, a gas-blower buyback program could ease the financial strain of exchanging old technology for new.

Or we could just go back to rakes and brooms. Remember those days? Ahhhh.

Shopping for an electric mower? Here's our guide