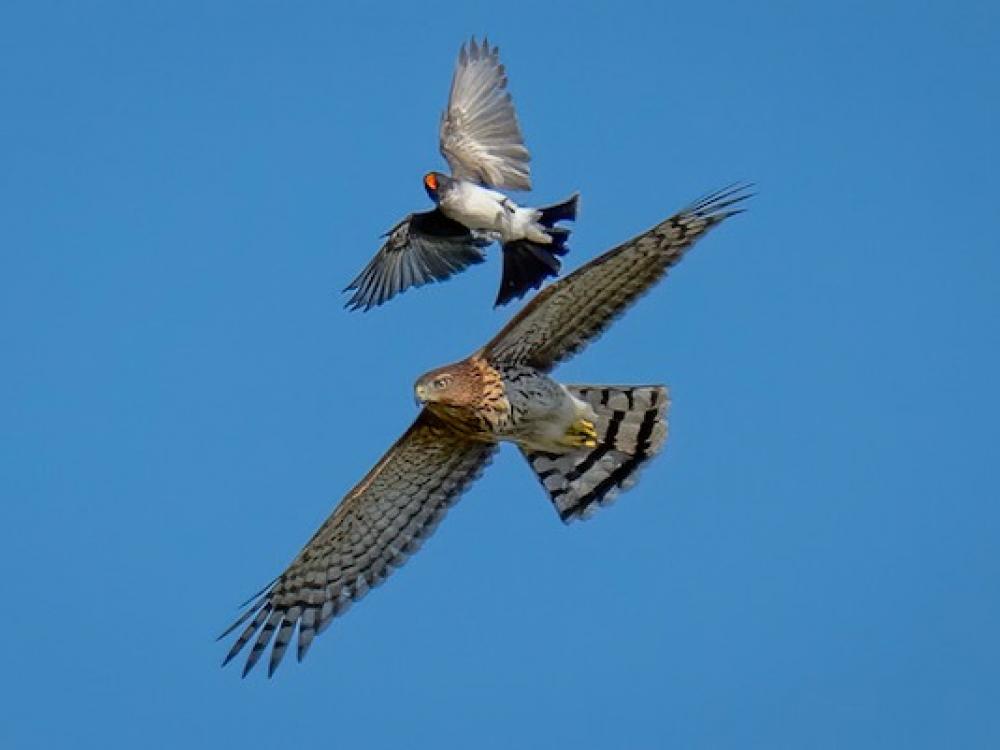 On this warm winter day, it’s busy at the bird feeders outside my office window with the usual backyard crew. 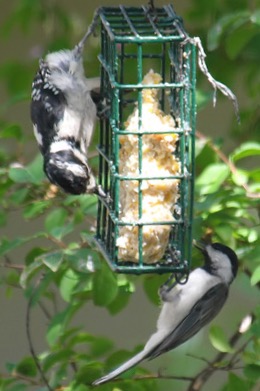 A downy woodpecker and a Carolina chickadee enjoy a suet feeder. Photo by Kala Murphy King.

Suddenly all chirping and twittering cease and with a noisy fluttering of wings, the birds flee deep into the bamboo forest next door. A young northern cardinal takes shelter in my yard's large yaupon holly, bedecked in red berries. He probably wants to stick close to the feeders — a rookie mistake.

A Cooper’s hawk (Accipiter cooperii) deftly swoops between the branches, plucks the cardinal from the yaupon’s open branches, and lifts it high into a black walnut tree. Soon a rain of tiny red feathers descends. After a pause, the hawk flies off. Then, barely missing a beat, birds emerge from the bamboo and compete over seed again.

Some raptors take this bird feeder thing a bit too literally.

Usually, the raiders belong to the raptor group known as accipiters. Their short, broad wings and sleek tail enable them to fly like fighter pilots amid tree branches. But evidently not through thick stands of bamboo. 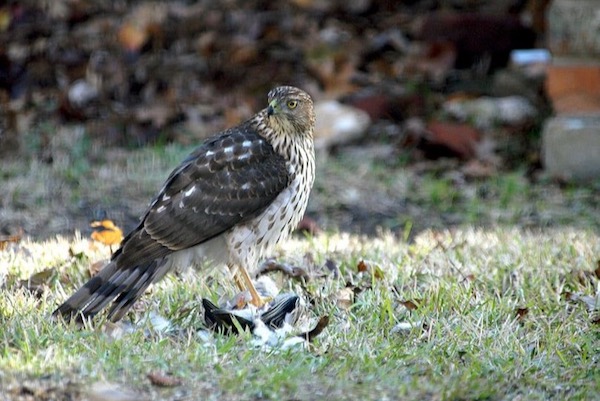 A Cooper’s hawk dines on a dove. Photo by Kala Murphy King.

FAST FOOD ON THE FLY

The Coop was lucky. If a raptor succeeds in one of every eight attempts, it’s a good day. Because of the extreme flying skills needed, mortality rates among raptor young are high from striking trees and structures.

“We had a Cooper's hawk that used to come and worry the birds at our feeder. All the tiny songbirds would dive into the Carolina jessamine vine and disappear out of reach in the tangle. Once, I watched the Cooper's hawk, practically radiating frustration, dive in after the little birds. The green blanket of vines heaved and shook. It looked like a cat playing under the bedcovers. The hawk eventually emerged without a catch, shook his feathers, and left.” 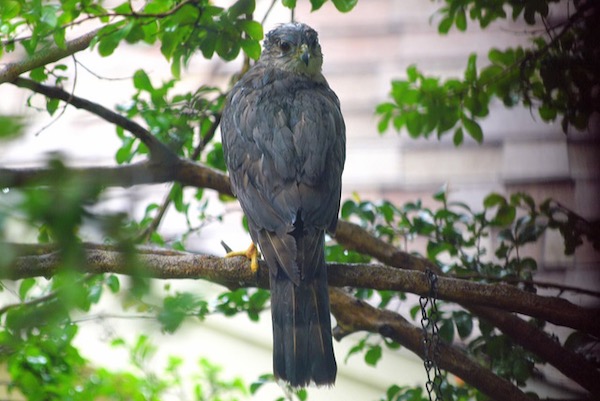 A sharp-shinned hawk pauses in its pursuit of sparrows. Photo by Kala Murphy King.

Over the past decade, white-winged doves, which tend to roost in treetops, have displaced mourning doves that favor nesting in human structures less accessible to flying raptors. Cooper’s hawks are the beneficiary. Large plump doves make a mighty good meal.

“Twenty years ago, Cooper’s were a rare sight in suburbia. There are more and more of them. They view bird feeders the way teenagers do fast food places,” says Bob Mione, restoration manager of Connemara Meadow in Allen.

While Cooper’s hawks are year-round residents, winter occasionally brings to the area another accipiter. The sharp-shinned hawks (Accipiter striatus) follow songbird flocks south. Barely bigger than a robin, sharp-shinneds are ultra-stealthy and prey on petite songbirds like wrens and chickadees. 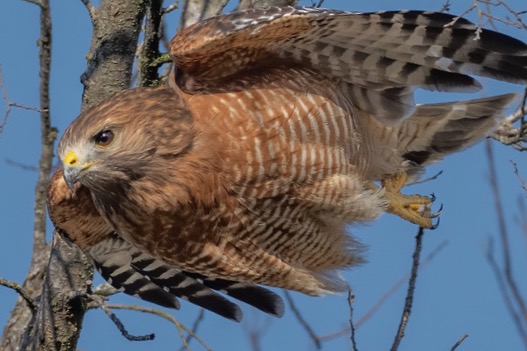 A red-shouldered hawk shows off its forest flying skills. Photo by Nick DiGennaro.

Unless your bird feeder is in an open area, red-tailed hawks (Buteo jamaicensis) are unlikely to raid it. Instead, the ubiquitous raptor prefers fields and roadsides, perching high on power poles and using its superb distance vision to detect rodents and ground-feeding birds, and then swoop in for the kill.

In your yard, you’re more likely to see the similar-looking red-shouldered hawk (Buteo lineatus). The raptor uses its short, stout wings and long rudder-like tails to sip through forests at high speed. The large yet highly agile flier can pick sizable birds like a red-bellied woodpecker right off the trunk and keep going.

One afternoon, my backyard erupted into chaos. A red-shouldered hawk was working the neighborhood. A murder of crows was mobbing the raptor, cawing loudly and dive-bombing it as it soared. The hawk alighted in the tree canopy, staring haughtily and staying steely calm as crows swooped close to its head.

Songbirds hiding in the bamboo chirped and cheered on the crows until the raptor departed.

Yet sometimes red-shouldered hawks and crows are allies, joining forces in the twilight hours of dawn and dusk to chase great horned owls from their territory. It, too, is a noisy experience.

The red hawks engage in spectacular mating displays with the male soaring high, then diving and spiraling up, all while calling, to impress the female. Copulation occurs mid-flight. Mid-winter is mating season for many birds of prey so that their maturing young are ready to eat unregurgitated food and learn to hunt when other birds’ eggs and chicks are available. 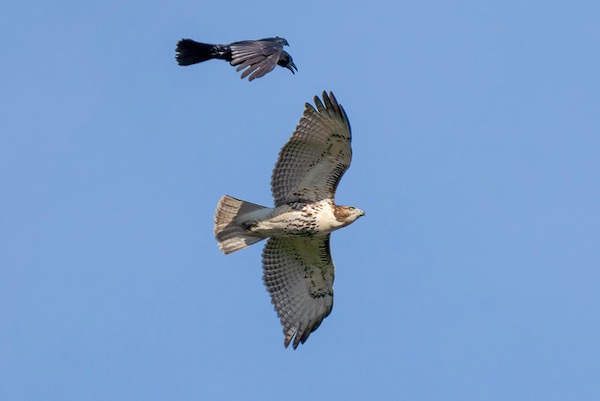 A crow harasses a red-tailed hawk​. Photo by Nick DiGennaro.

But fear not for your small dogs and cats. It’s difficult for raptors to carry more than their weight. Red-tailed and red-shouldered hawks rarely reach four pounds, with Cooper’s hawks weighing half as much.

Yet the raptor food-chain antics may be a bit more Wild Kingdom than you care to endure. After all, most of us turn to birdwatching for relaxation and enjoy how bird feeders bring the avian crew closer in. Songbird snatching can also be disturbing to some young children.

Raptors such as these are protected under the Migratory Bird Treaty Act and may not be trapped, hunted or harmed. The solution is to forgo filling the bird feeders for two weeks to a month. Any raptors stalking the feeders will move on to more fertile territory. Providing natural food sources with native plants that make berries and seeds will tide songbirds over in the interim. 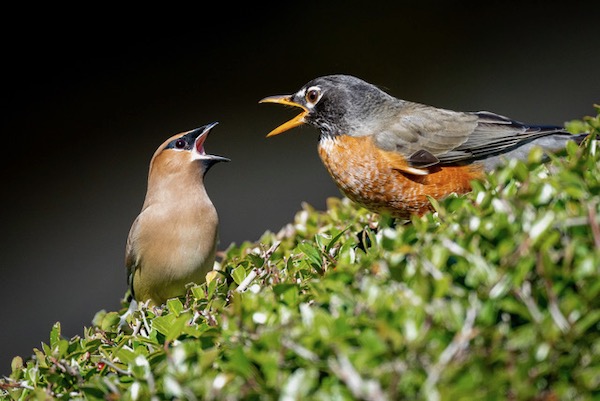 A robin and cedar waxing argue over yaupon berries. Photo by Nick DiGennaro.

Let your backyard birdwatching benefit science by participating in the Great Backyard Bird Count Feb. 18 to 21, 2022. Watch and count birds, or identify through bird song, in your backyard, business or local park. Do this at least 15 minutes once or more a during the four days and report to the bird-count website. The Merlin Bird ID app makes it easy, especially for beginning birders.

New to birdwatching? Project FeederWatch, which runs through the end of April, is for you. Coordinated by the Cornell Lab of Ornithology and Birds Canada, a small fee grants you a welcome kit with a bird identification poster and activity calendar. More than a bird census, FeederWatch tracks issues such as abnormal plumage, bill deformities, or missing head feathers. 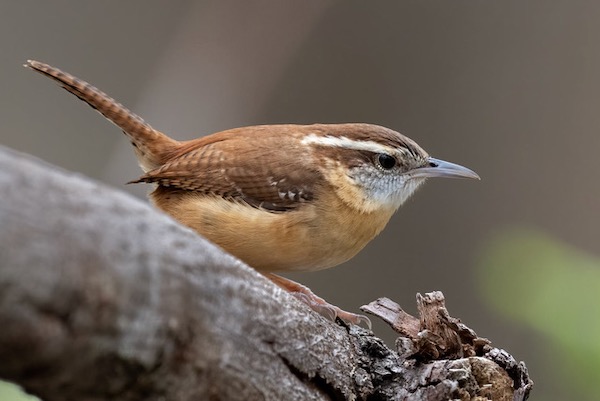 A Carolina wren perches in a park. Photo by Nick DiGennaro.

Nick DiGennaro has a fine artistic eye with bird photography. He spends hours each week at Breckinridge Park and other places, getting the perfect shot. Find his work at North Texas Bird Watching on Facebook, and see more of his work and purchase prints at Fine Art America.

Kala Murphy King is known for her naturalist knowledge and extraordinary intimacy with the wildlife she photographs. Her favorite place for photography is White Rock Lake. Follow her photography and purchase prints at her blog, Kaptured by Kala.

Ode to the Little Brown Bird

Why the Great Backyard Bird Count is a hoot