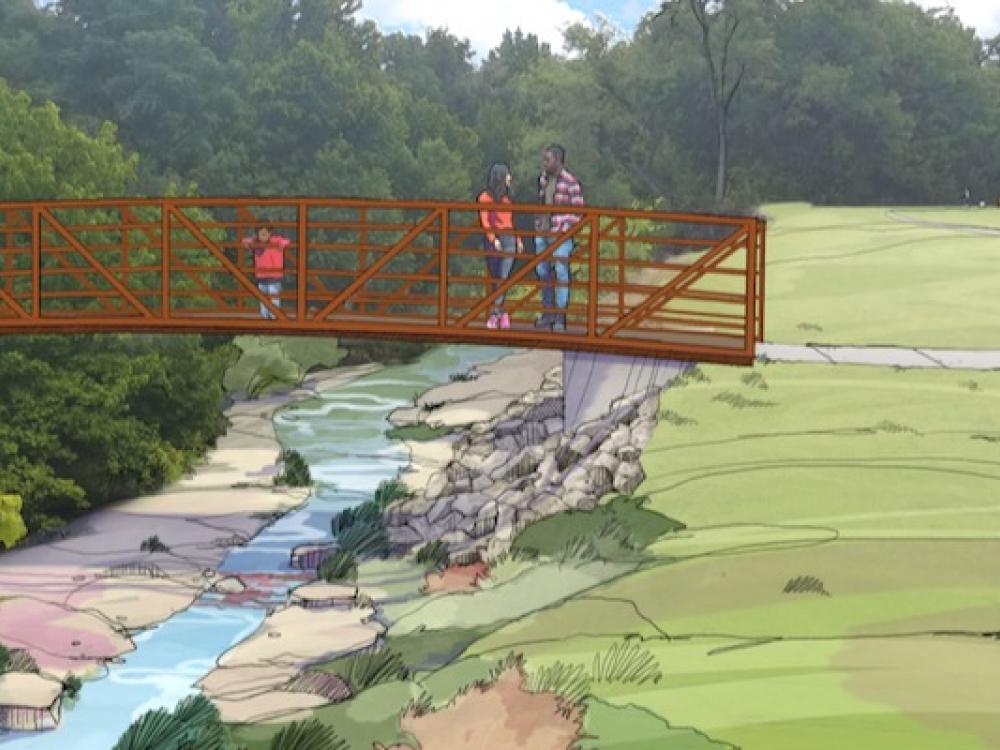 Trust for the Public Land’s vision for a neglected part of Dallas recently got a funding boost. Rendering courtesy of Trust for Public Land.

A quality park or green space within a 10-minute walk of every home in Dallas?

Such is the audacious vision of the Trust for Public Land. A challenge anywhere in the city, but nowhere more so than in the historically neglected South Oak Cliff, where city services lag behind more affluent areas, leading to illegal dumping, abandoned buildings and urban blight.

No natural feature more defines South Dallas than Five Mile Creek, named for being five miles from downtown Dallas. It cuts east-west between Kiest and I-20, infused by the major feeders of Adams, Alice, Ricketts, Runyon Springs and Woody Branches, plus Crow and Lisbon’s Creeks, before merging with the Trinity River near McCommas Bluff Landfill.

“Parks have the power to improve health, benefit the environment, build equity, and bring the community together, but only about half of the nearly 200,000 residents living in the Five Mile Creek watershed have access to park or trail within a 10-minute walk of home,” said Robert Kent, Texas State Director for TPL.

The project recently received a significant infusion of support with $2.65 million from the Boone Family Foundation and $2.5 million from Lyda Hill Philanthropies.

The small but mighty two-acre South Oak Cliff Renaissance Park on Alice Branch is already open. But first extensive tire dumps and other refuse, including human waste and drug debris, had to be removed from the creek and its riparian corridor.

Then there's the 40-acre Judge Charles R. Rose Community Park, in the Highland Hills neighborhood off Simpson Stuart Road, just south of Five Mile Creek. It has an estimated completion date of 2023 and will ultimately be connected to the greenbelt.

Meanwhile, the 82-acre Woody Branch Park project, located in the Glen Oaks neighborhood southwest of I-35E and Loop 12, is in process. The deeply forested and rocky area contains one of the last unchannelized stretches of Five Mile Creek.

TPL contacts extensive hydrology studies to ensure that the trail and restoration work does not exacerbate erosion. The emphasis is on low-care native plants when possible.

INVESTMENTS IN A GREEN FUTURE 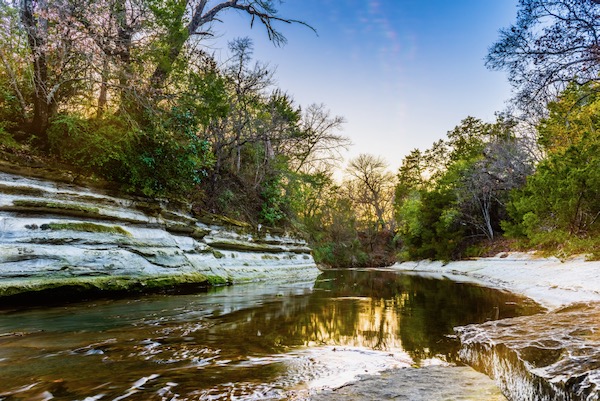 Five Mile Creek is the lifeblood that ties together many South Dallas neighborhoods. Photo courtesy of Trust for Public Land.

“For 80 years, Dallas has dreamed of a greenbelt along Five Mile Creek to benefit the city’s health, connectivity, and environment,” said Tillie Borchers, chair of the TPL Texas Advisory Board. “With these new commitments, we are closer than ever to making this long-imagined dream a reality for our city.”

All told, 124 acres of public land will be protected, restored, and opened to the public —a  public that has clamored for equal treatment and health amenities for many frustrating decades.

“The entire greenbelt network will benefit not only the residents of southwest Dallas and Oak Cliff but make the natural beauty of the area accessible to all of Dallas’s 1.3 million residents,” said TPL’s Kent.

The Five Mile Creek Urban Greenbelt is part of a network of parks and trails TPL is developing across Oak Cliff and southwest Dallas. Also along the creek are Texas Land Conservancy’s Oak Cliff Nature Preserve and the Kiest Park Conservation Area. Just a few blocks off the creek is the anticipated Floral Farms Park at the former Shingle Mountain site.

“The Five Mile Creek Urban Greenbelt will be a transformational asset for southern Dallas that will advance equitable development and provide environmental and health benefits for generations to come,” said Garrett Boone, Dallas entrepreneur and Chair of the Boone Family Foundation. “We are proud to continue our support for the project with our new commitment.

From 2019 to 2022, TPL raised $13.3 million to fund their park and greenbelt projects, including previous gifts from the Boone Family Foundation totaling $2.4 million. The Sapphire Foundation, Victoria and William Chaney, and others helped kickstart the project’s beginnings with more than $5.7 million. The City of Dallas has also greatly contributed financially. 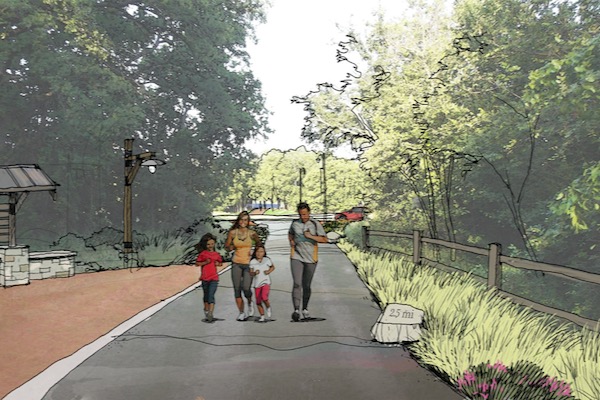 “I’m so excited to support the Five Mile Creek Urban Greenbelt, which will benefit so many children and families in southern Dallas,” said Lyda Hill, founder of Lyda Hill Philanthropies. “As a lifelong supporter and user of parks and trails, I know how important these assets are to building creative minds, healthy bodies, and thriving communities. It’s not the size of the check that matters, but the joy I see watching children and adults come together in community in these spaces.”

Residents got rid of Shingle Mountain. Is a park in their future?