Where to recycle campaign signs in North Texas 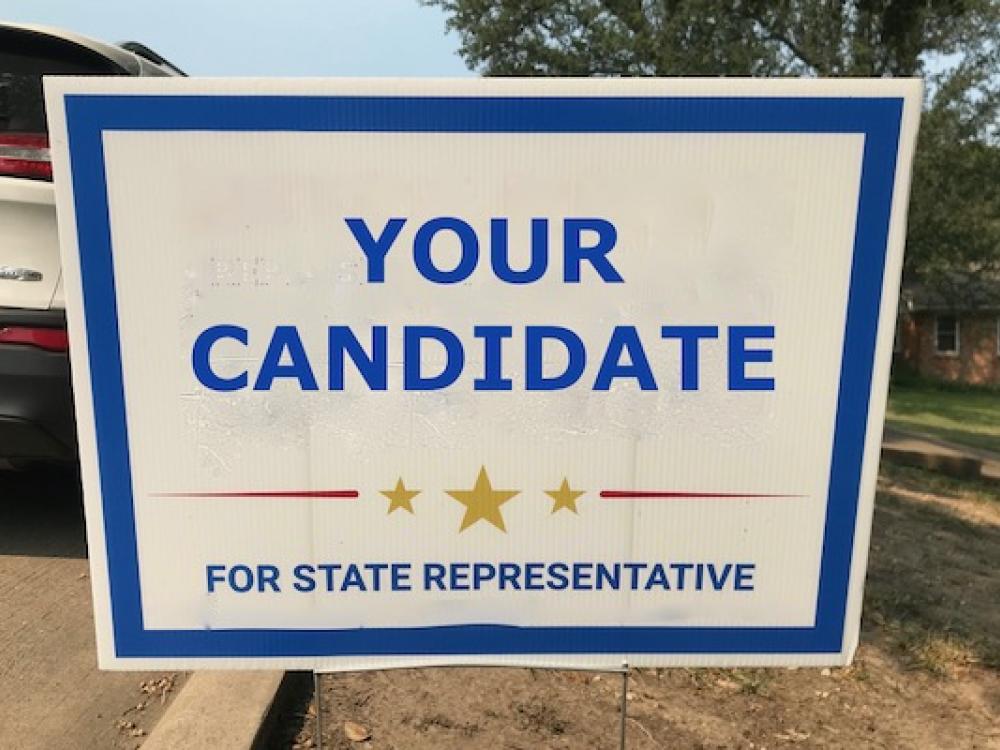 We found a few locations in DFW that will accept the corrugated plastic signs. Photo by John Kent, altered by GSDFW.

No matter how the election turns out, both sides have a common dilemma. What to do with all those campaign signs?

Yes, you can recycle political yard signs in North Texas - but like democracy itself, it will take a little effort.

One of the easiest materials to recycle – cardboard - has all but faded away from the political yard-sign scene, replaced by the now-ubiquitous corrugated-plastic placard atop an H-shaped wire stake.

The transition has not been especially kind to the ecosystem. Neither Dallas, Fort Worth, Arlington nor Plano – the four largest cities in North Texas – allow any part of the plastic-and-wire signs in residential recycling carts.

Neither Dallas, Fort Worth, Arlington nor Plano – the four largest cities in North Texas – allow any part of the plastic-and-wire signs in residential recycling carts.

But that doesn’t mean they can’t be recycled or reused. The City of Fort Worth will take the wire stakes for scrap-metal recycling at drop-off stations around town, and some private recyclers will accept the plastic sign boards, though with notable restrictions.

Near Love Field in Dallas, Recycle Revolution (6835 Forest Park Rd.) will recycle the plastic part of the sign, according to Bob Franklin, finance director of the Dallas County Democratic Party. There is no charge for an individual who drops off a small number of signs at the business, but an organization hauling in a larger quantity will be required to pay a fee.

It’s somewhat different in Fort Worth, where APJ Recycling will recycle the signs in quantity from an organization but will not accept them directly from an individual, said Diane Covey, Code Compliance public information officer for the City of Fort Worth. Otherwise, residents “have to throw them away. They cannot go in the blue recycling cart,” Covey said.

But before you trash them, let your imagination run free.

“We recommend the signs be disassembled. The metal stakes can be reused if the resident wishes to create their own signage such as to announce birthdays, congratulations or other messaging such as ‘Clean up after your pet’ reminders to neighbors,” said Danielle McClelland, division manager of Environmental Quality & Sustainability for the City of Dallas.

She recommends that the printed part of the sign be discarded in the garbage roll cart or returned to the campaign that distributed them.

Which brings up another option.

The Dallas County Republican Party will recycle signs taken to party headquarters at 11617 North Central Expressway #240 in Dallas, and the Tarrant County Republicans have a similar operation.

“If it’s recyclable material, we’ll find a way to do it,” said Tarrant County Republican Party executive director Jeremy Bradford. “Anything we can do to recycle, we will.”

Bradford suggests taking the signs to a precinct chair or directly to party headquarters at 7524 Mosier View Court #230 in Fort Worth. He says dated signs like “Trump 2020” can be recycled right away, while undated ones can be saved for reuse. The party retains the wire stands for future campaigns. Meanwhile, the Denton County Republican Party headquarters at 2921 Country Club Rd #102 in Denton has an on-site bin for recycling the signs.

No comparable sign-recycling programs are offered by the Democratic Parties of Dallas or Tarrant Counties, though Tarrant Democratic Party executive director Marco Rosas says the supersized 4x8-foot “Vote Democratic” signs are collected and used for the next election cycle.

“For the smaller yard signs that say ‘Biden-Harris,’ for example, a lot of people actually like to keep those,” Rosas said.

Up in Denton, the Democrats are advocating reuse.

“We try to save our stakes at the end of cycles to save on cost, and we encourage folks to repurpose their signs into new protest signs or other stuff,” said Denton County Democratic Party executive director Lesly Gutierrez.

“Other stuff” has included some outside-of-the-box thinking, like residents fashioning the signboards into chicken coops, she said.

Among the five most populous Metroplex municipalities, Garland is the outlier when it comes to recycling campaign yard signs. The city of 240,000 does allow residents to place the corrugated-plastic sign tops in curbside recycling carts. Garland’s Recycling Center at 1426 Commerce St. will take the wire stakes.

Garland is the outlier when it comes to recycling campaign yard signs. The city of 240,000 does allow residents to place the corrugated-plastic sign tops in curbside recycling carts. Garland’s Recycling Center at 1426 Commerce St. will take the wire stakes.

Not sure how to recycle signs where you live? Check the website of your city, or contact your county’s Democratic or Republican party headquarters.