Bats keep Austin weird but they're not the monsters of myth 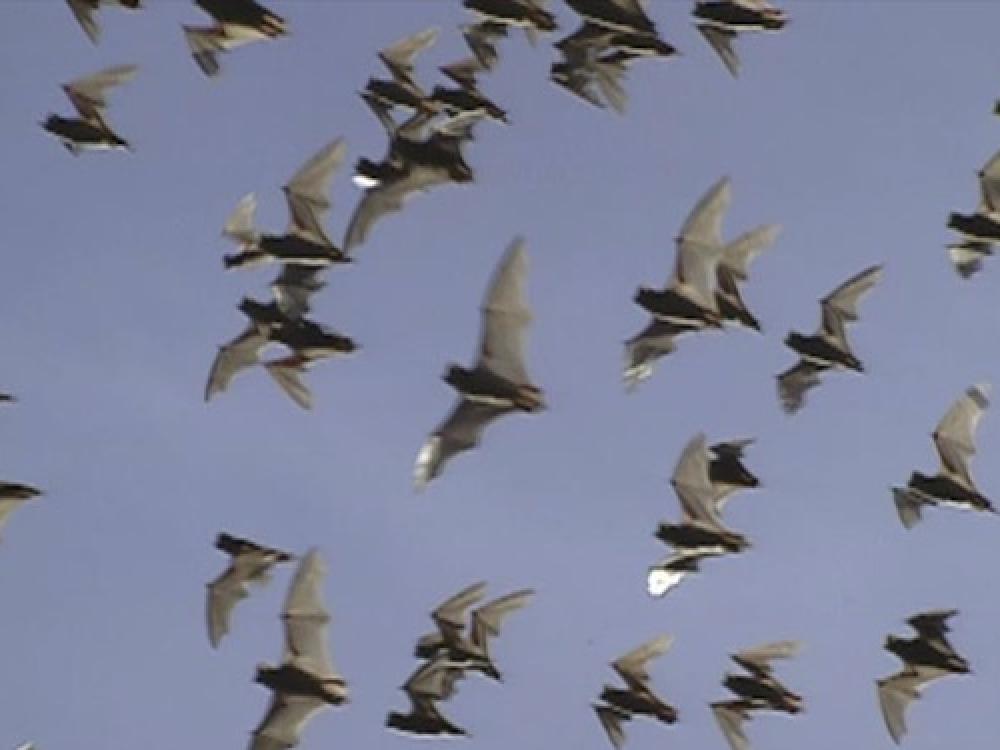 Bats are depicted in fiction as omnious, deadly creatures, but their benefits are well documented. Photo courtesy of Texas Parks and Wildlife Department.

Soon it will be Halloween, when we imagine all kinds of scary things. We see bats depicted in literature flying at night on leathery wings or alongside Dracula, the Transylvanian vampire. And although shape-shifting vampires don’t really exist, bats do.

Real bats have amazing abilities and they are beneficial to us. But their lives seem weird, and so in stories and folklore they are mysterious and maybe frightening.

In the story of Batman, when young Bruce Wayne turns his tragedy into a life of fighting evil, he searches for a persona that will frighten criminals.

He says, “I must be a creature of the night, black, terrible, …” and he chooses a bat.

In the average person’s mind, perhaps bats are black and terrible, but not in nature.

In Bram Stoker’s novel, Dracula, the vampire feeds on the blood of the living. The Count sometimes appears in the form of a bat. There is a loose correlation between the myth and the real vampire bats.

Sure enough, there are vampire bats that feed on the blood of birds and mammals, mostly domestic livestock. But vampire bats were named after the legendary creatures, not the other way around, according to PBS News Hour.

Only three of the more than 1,300 bat species in the world are vampire bats: the common (Desmodus rotundus), the white-winged (Diaemus youngi) and hairy-legged (Diphylla ecaudata) vampire bats. Residing in Central and South America, these are also the only bats who consume blood — and only blood — for food and water, according the News Hour.

Do not expect to see them here any time soon. But, there are reports of vampire bats moving slowly farther north due to climate change.

According to Kate Rugroden, the director of Special Projects for Bat World Sanctuary in Weatherford, there have been only a record or two of a vampire bat showing up along the Texas-Mexico border, with one possibly blown north in a hurricane. 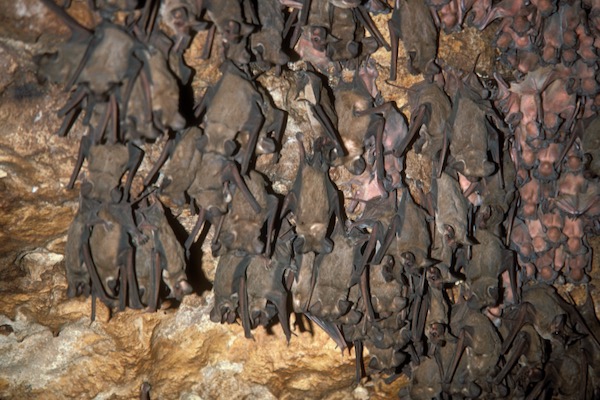 If we don’t have vampire bats in North Texas, what bats do we have?

According to Rachel Richter, a Texas Parks and Wildlife urban biologist, about seven species show up in the Dallas-Fort Worth area. That includes the eastern red bat, a solitary species with reddish fur that roosts in trees. Their color makes the bat resemble a dead leaf when it is hanging in a tree.

Then there is the tri-colored bat, a very small species weighing about the same as a quarter. Each of its individual hairs is tri-colored, shading from dark to light. 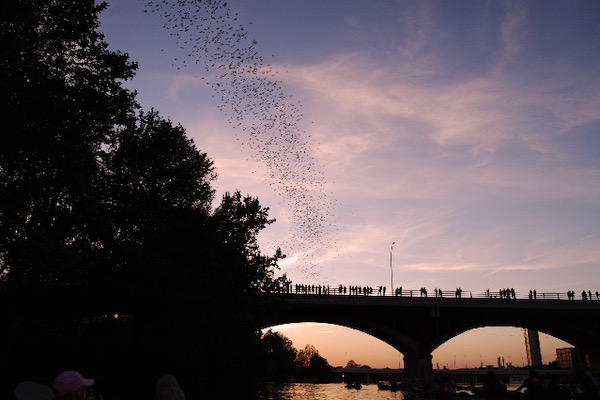 There are no big colonies in Dallas-Fort Worth, but Rugroden said that they may be found in crevices and in old buildings, and there is a “decent population” around Lake Lewisville. She added that groups of evening bats roosting around White Rock Lake number in the hundreds.

The Texas Parks and Wildlife website offers a Bat-Watching Sites of Texas page in collaboration with Austin-based Bat Conservation International. The resource includes information about the Mexican free-tailed bat, locations of colonies, and photos. Some of those places can be visited, and the web page helps us understand how to visit while keeping ourselves and the bats happy and healthy.

BLIND AS A BAT

Are bats really blind? No, but some have pretty limited vision.

“Some species have eyesight that’s about as good as a human’s,” said Richter,

But on a dark, moonless night, bats still fly around obstacles and chase small flying insects. They do this by vocalizing high-pitched sounds that bounce back to be interpreted by the bat’s exquisite hearing. They can judge the size, distance and movement of things in their environment. And they can do this at 10,000 feet in the air, flying at 60 miles per hour, according to Rugroden.

Bats have a general set of vocalizations for navigating, and switch to a more specialized frequency when they encounter a small flying insect. Imagine being able to dodge, swoop and catch insects in the dark, with your hearing providing what you need for a mental image of your surroundings.

With such abilities to vocalize and hear, it is not surprising that bats that live in groups have complex social “talk.”

“Mexican free-tailed bats have 25 different, socially-relevant vocalizations with syntax and tone contributing to what the vocalization means,” Rugroden explained. “A mother bat who loses her baby will cry.”

Rugroden says that the six or seven species we see in North Texas have diets that ought to make us happy. On their nightly flights they eat huge numbers of insects that may damage crops.

“Just the Mexican free-tailed bat produces three billion dollars a year in benefits,” she said. “And that’s considering just the corn crop alone. There’s also the extra yield of corn and the reduced need for pesticides.”

Urban biologist Richter said that bats (especially hoary bats and tri-colored bats) do eat lots of mosquitoes. Those tiny insects are not necessarily their top preference. She noted that since mosquitoes are small, bats are happy to get bigger moths and beetles.

“Just the Mexican free-tailed bat produces three billion dollars a year in benefits,” she said. “And that’s considering just the corn crop alone. There’s also the extra yield of corn and the reduced need for pesticides.”

“Do you want a tater tot or a whole hamburger?” joked Richter.

But bats catch enormous numbers of insects, regardless of size. Richter said that tri-colored bats can increase their body weight by 25 percent in 30 minutes of feeding.

One of the biggest threats to bat populations is white-nose syndrome, according to the U.S. Department of the Interior. Richter reported that this fungal disease was first observed in bats in a New York cave in 2006 and has spread since then.

The disease has been documented in Texas in recent years in bat species that hibernate here. During hibernation, Richter explained, if the fungus colonizes the bat, the animal’s torpor is disturbed. (It “wakes up.”) Without being able to return to the lower metabolism of hibernation, a bat can burn through its winter fat stores and starve. Alternately, the bat may attempt to find food at a time when few insects are flying, so that it starves anyway.

It is a devastating disease. The U.S. Fish and Wildlife Service has a website with more information about this threat to bats.

Another threat to bats is wind turbines. You might expect that hitting the spinning turbine blades would be the thing that kills bats, but there’s something else. Close to the blades, the air turbulence creates huge shifts in air pressure, and Rugroden said that a nearby bat may suffer barotrauma. What happens is that the shift in barometric pressure ruptures blood vessels in the bat’s lungs. 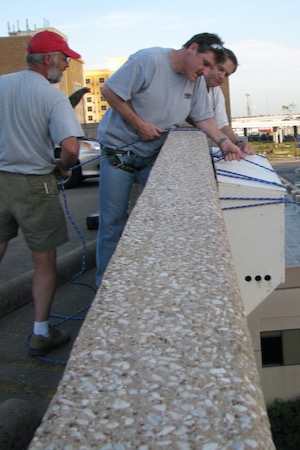 Another threat to bats is humans. While people and bats can coexist in urban settings, occasionally there are collisions. In 2008, a colony of about 30,000 Mexican free-tailed bats lived in the parking garage of the Fort Worth Convention Center. Thousands of bats make for lots of guano, or bat-poop, and so the city wanted the bats gone.

Bat World Sanctuary and 911 Wildlife teamed up to take care of it. First, they built and installed a couple of large bat houses so that the evicted bats would have somewhere to go. Bonnie Bradshaw, the founder and former president of 911 Wildlife, said her staff mounted the bat houses on the outside wall. To do this, they had to hang over the side of the building, a little like when Count Dracula crawled down the vertical face of his castle in Transylvania.

Then it was time for the bats to leave the two-inch spaces between concrete sections in the roof of the garage. The roosting spaces were covered with welded wire, with bat-size exit tubes so that bats could leave but not return. This was a great solution for the top floors. 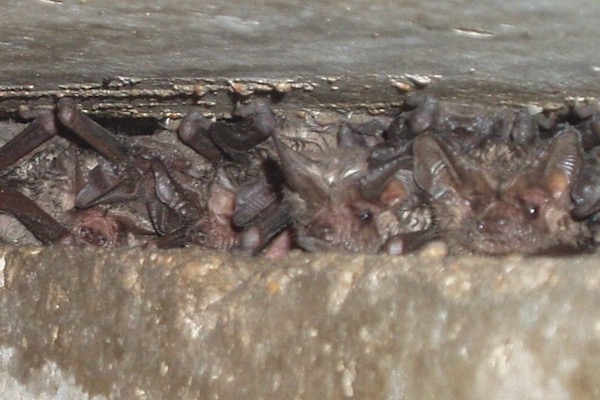 Bats roosting in the crevices of the Fort Worth Convention Center parking garage in 2008. Photo courtesy of Bonnie Bradshaw.


Unfortunately, the city left the lower floors of the garage unprotected. Bradshaw reported that in 2016, after bats had colonized those spaces, her company submitted a bid to remove the bats. However, they lost to another local company and she fears that the city may have hired an exterminator to eliminate the bats. Green Source DFW has reached out to the city for comment.

IF YOU FIND A BAT 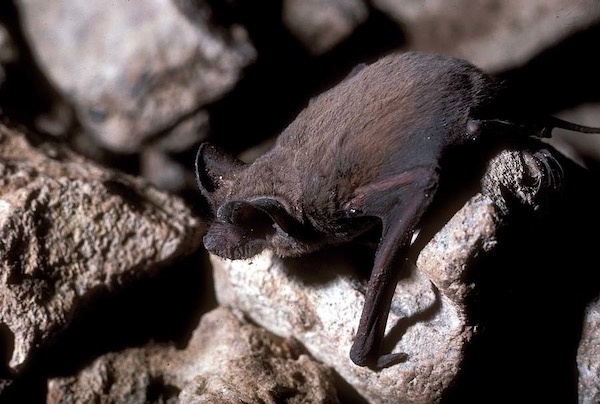 If you find a sick or injured bat on the ground, various sources say that you should not touch it with bare hands, for your safety as well as the bat’s. The risk of rabies is small, less than 1 percent of bats, according to Richter. You can contact a wildlife rehabilitator who can quarantine the bat if needed and hopefully help with healing and return it to the wild. Bat World Sanctuary will assist a person to find a rehabilitator close to them.

People build or buy bat houses to share their property with bats. The houses are generally rather flat and open at the bottom. Experts advise that they must be mounted high enough (around 15 feet or more) that the bat can drop and become airborne before reaching the ground. The bat house could be mounted on a fixed pole or the side of a building, facing south or southwest so that it gets some winter sunlight for warming.

Think about how the surrounding area might support bats. It’s great if there is a birdbath or pond fairly close. The plants in your garden can help, too. If you plant some native, night-blooming plants, it will draw some night-feeding insects, which in turn can help feed bats.

Bats hang at Parker County sanctuary while they heal

Michael Smith is an Arlington-based writer and naturalist. He is author of "The Wild Lives of Reptiles and Amphibians," and "Herping Texas: The Quest for Reptiles and Amphibians," coauthored with Clint King. (Both from Texas A&M University Press.) He semi-retired after a 35-year career as a Psychological Associate. He offers mindfulness in nature groups as part of his part-time practice: See msmithlpa.com. Contact him at masmith.tx@gmail.com.