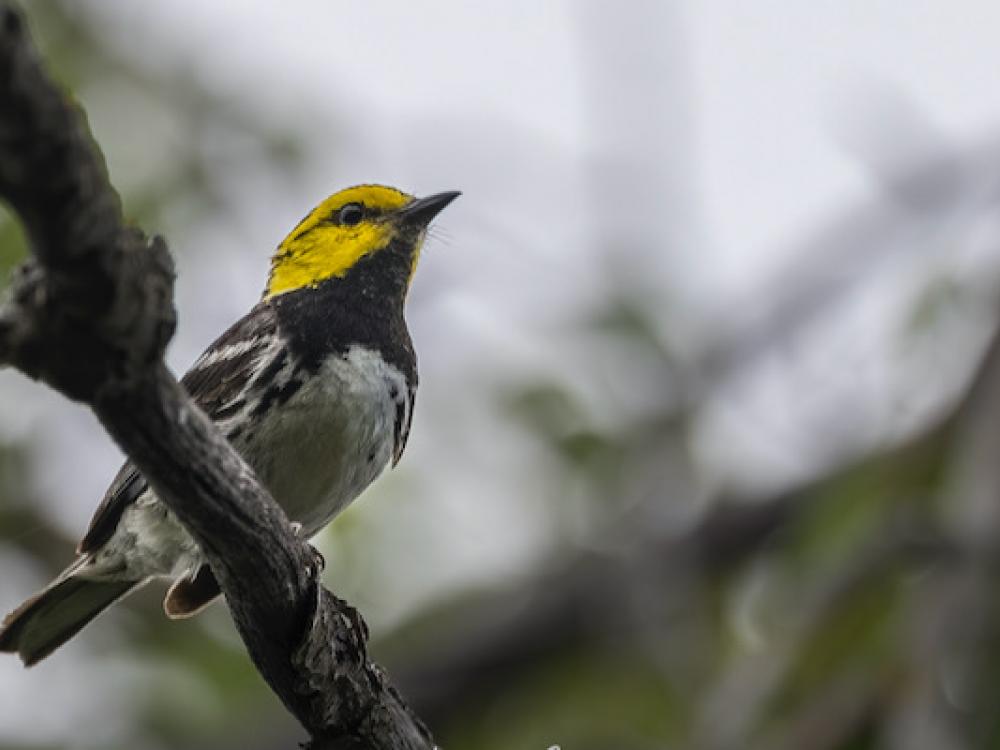 A golden-cheeked warbler was seen at the Dogwood Canyon Audubon Center for a few weeks in May. Photo by Dana Sudborough. 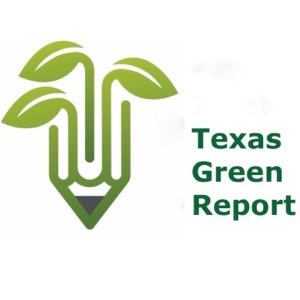 A golden-cheeked warbler, which nests only in Texas’ Hill Country, was recently spotted at Dogwood Canyon Audubon Center in Cedar Hill, a community south of Dallas. Wildlife experts explain why the sighting could be a warning sign for the endangered bird

MARSHALL HINSLEY: An endangered species makes a rare appearance in a nature center south of Dallas in this episode of the Texas Green Report, a production of Green Source DFW and the Memnosyne Institute. I'm Marshall Hinsley.

A little smaller than a house sparrow with a mix of velvety black and white plumage in their wings and an all-white underbelly below their rich black breast.

Golden-cheeked warblers are most notable for their lemon yellow face with a black eye-line streak.

After spending the winter in Mexico and Central America, the insect eaters fly to Texas in the spring and build a nest for raising up a brood.

The golden-cheeked warbler is the only bird species that nests exclusively in Texas, mostly in the juniper oak woodlands that span the Texas Hill Country, and reach up almost, but not quite into North Texas.

The species can be spotted at times outside of this range, though not too often. But in the spring of 2022, at least one male made his way to the Dallas suburb of Cedar Hill, giving visitors of Dogwood Canyon Audubon Center a chance to see the lone bird up close.

The arrival was exciting for everyone there, but also troubling. 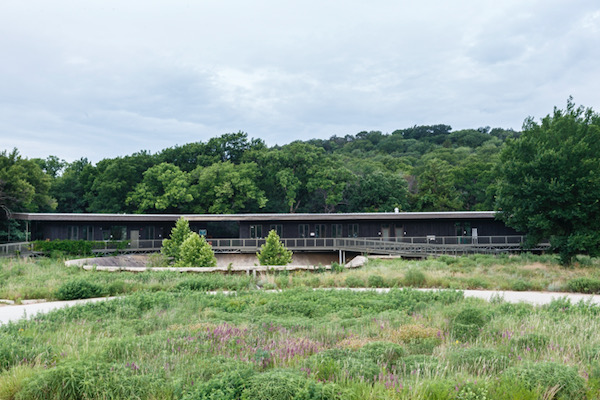 The 200-acre Dogwood Canyon Audubon Center, located in Cedar Hill, has been called a piece of 'Hill Country' in North Texas. Courtesy of DCAC.

KATIE CHRISTMAN: Yeah. So that's the really I think fascinating event that we've seen here in the past couple weeks, the golden-cheeked warbler is an endangered species found here in Texas, and it's endemic to the state of Texas. We haven't seen a golden-cheeked warbler for over 10 years on this property. And it was noticed by a local birder.

They heard it, they saw it and it had been hanging out here for about two weeks now.

KATIE CHRISTMAN: The golden-cheeked warbler is typically found in a very specific space and habitat in Texas. So to find it here can speak a lot to the habitat that it's in and the food that it eats in its nesting habitats. So there's a lot of excitement around that because one it's an endangered species it breeds in a specific area. And then to see that appear in an area where you don't normally find it is all of that excitement. You know, there's a lot of chatter over whether, hey, is it nesting? Is it just passing through, you know, why did it appear after being gone for over 10 years? So there's all those questions around the scientific — within the scientific community, the birding community and us as well.

MARSHALL HINSLEY: Just 16 miles south of Dallas Dogwood Canyon Audubon Center and its neighbors form a more than 200-acre sanctuary in one of the nation's most populous regions.

KATIE CHRISTMAN: So I mean, You have not just us, but we have next door to us is Newman International Academy, Cedar Hill State Park. Across the road you have Cedar Ridge Preserve. So we're in an area called the Green Belt of Cedar Hill. So this is a long stretch of just green space that isn't developed. Again it's set aside for conservation.

You have Joe Pool Lake, which is next door to us as well. So humans and and wildlife can also enjoy that space. So there's benefits for both people and birds, all within the same community.

MARSHALL HINSLEY:This pristine land creates an oasis among the traffic, housing additions and shopping centers that sprawl out in every direction. And that habitat was what most likely drew the warbler to the center says Romey Swanson, director of conservation for Audubon Texas.

ROMEY SWANSON: Well, I mean, we're here at Dogwood Canyon Audubon Center and you can see a beautiful, very healthy woodland ecosystem. So the first thing of course that brought it here was it this distinct habitat type that combines deciduous hardwoods with the ash juniper and Eastern red cedars that occur here, providing critical habitat for the bird, a critical breeding habitat, and the site exists at the very limits of its known breeding range. 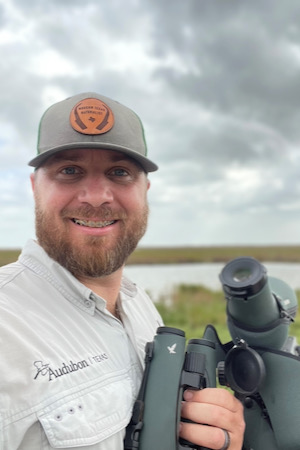 So it's not entirely unexpected that it shows up here. We have the habitat. So when the birds are around, they're going to find the place. And then the stewardship that supports this habitat and promotes its health is always going to be a sort of beacon for the birds.

When I say deciduous hardwoods, I'm talking about a group of trees that typically loses its leaves in the winter, typically associated with bottomland habitat or moist canyons in the Hill Country and up here towards the Dallas-Fort Worth Metroplex.

And and it’s sprinkled in with this evergreen tree called ash juniper or mountain cedar, it's got several names. And that's the critical component of, of the breeding habitat. So this bird relies upon the stripping bark of this tree to make its nest. It pulls this bark off of these trees, and it is one of the only materials that it'll make a nest from. So that's why there's this very distinct connection from this very specific habitat type and this bird that evolved and adapted to this particular region.

MARSHALL HINSLEY: For several weeks after news of the golden-cheeked warbler's arrival at Dogwood Canyon spread throughout the community of birdwatchers and the Dallas area, the center was packed with groups of birders who wanted to see the loaner in person.

Even if some had spotted the species in areas of the state where the bird is more common, these birders were thrilled by the chance to see the species closer to home, especially since the golden-cheeked warbler has been in decline despite its designation as an endangered species

ROMEY SWANSON: Yeah, the bird was listed in the '90s through an emergency proposal to the Fish and Wildlife Service. The bird's been well known. We've known we've known its existence, but the threats to the Hill Country, the Edwards Plateau, the greater range of this bird have largely been concerns around land use and compatible land uses.

So there was a lot of clearing of woodland habitat to create more grazable pasture land historically. And then one of the realities of life in Texas is that this occurs along one of the most incredible growth corridors in Texas and for that matter of the United States. So we have a lot of habitat loss to accommodate infrastructure, residential, commercial developments.

And for every acre that's taken away, that's one less opportunity for another bird, another pair of birds to breed and sustain that population.

MARSHALL HINSLEY: And that's why this sighting troubles biologists. On the one hand this golden-cheeked warbler could indicate that the species is expanding its territory. On the other hand. The sighting could be evidence that its usual range has been disturbed by human activities, thus driving individual birds into less hospitable environments, which could be deleterious to its already plummeting numbers

Also a major factor in declining populations of North American bird species is the matter of climate change and the big question mark that global warming places on the future of just about every species of animal and the plants that sustain them.

ROMEY SWANSON: So those are kind of the big drivers, historic, and now we're looking forward and in addition to those, we also see significant concerns from climate change and its influences on vegetational communities.

So can even without direct human pressures like land uses and development — are we going to see a shift in the type of trees that exist here that may not be compatible with the bird's needs in its natural history?

I believe that we're seeing, we can demonstrate negative impacts already, but to what degree of intensity and what does it look like when we project forward, particularly when we're looking at the opportunity at a moment in time for several different types of intervention — with no change, it looks grim.

If we really rally together to address some of these climate change challenges and focus on climate resiliency within our ecosystems, then we have a much prettier outlook on the opportunity in the future.

MARSHALL HINSLEY: Which is why Chrisman says that nature centers and green belts are essential for communities, because they carve out habitat that's vital for species preservation.

Even more, they create a place for people to discover the beauty of natural spaces and therefore develop a value for protecting them. 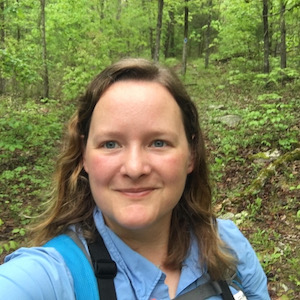 And so now is the time, if you've got young kids, get your kids outside, Connect them to nature. We have kids that come in with school groups and I've seen kids that are afraid of butterflies and I'm like, ‘no!’ Let's work on getting over that fear, getting connected to nature, developing that positive relationship. Because if you don't have that relationship, I can't then, and go say to you, hey, you gotta protect what's out there, if you don't know what's out there. So get outside and enjoy nature. Come to your local Audubon Center, like us. Come in. It's free to get in and just go hike on the trail. And if you don't know how to do that, let us know and we'll help you with that.

Find more podcasts for the Texas Green Report, a series produced by GreenSourceDFW.org.