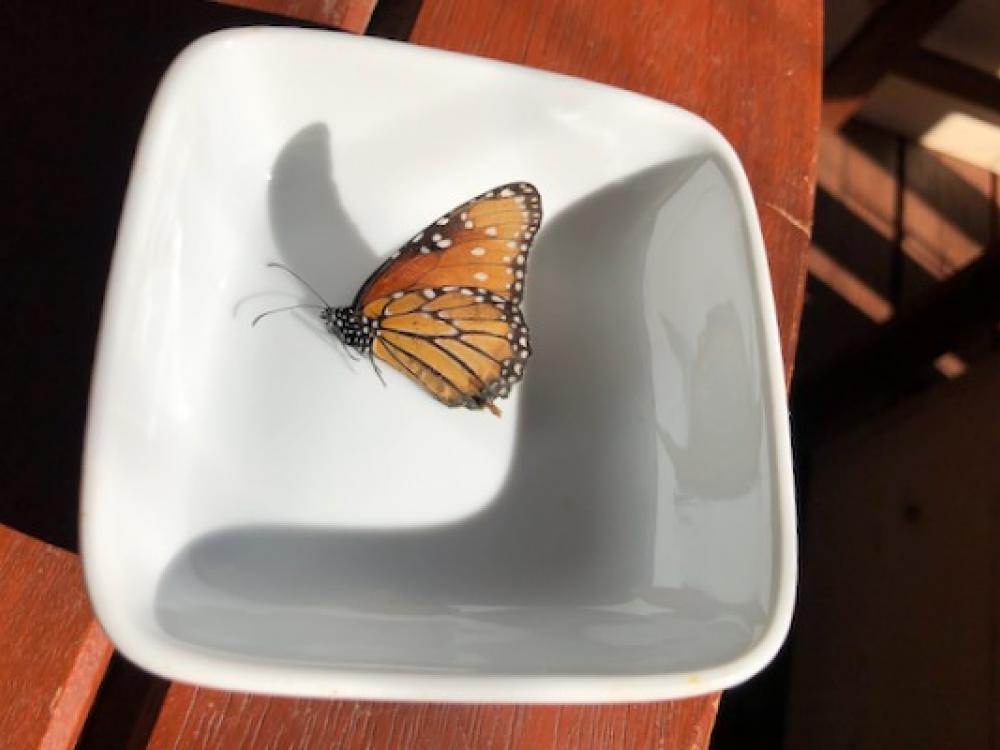 An encounter with a frozen butterfly leads to reporter's query about effects of weather extremes​. Photo by Julie Thibodeaux.

My husband and I were out walking in our Fort Worth neighborhood the day after New Year’s.

Temperatures in North Texas had recently plummeted from the high 70s the week before to the teens that morning.

I spotted an orange and black butterfly on the sidewalk. It looked like a monarch stunned from the freeze.

I picked it up and it slowly opened and closed its wings.

I cupped it in my gloved hands and took it home.

Turns out it was a queen butterfly. We set up a small butterfly house out of a plastic bin with a screened top. We researched what to feed it and kept it alive for two more weeks, by keeping it warm and feeding it orange and banana slices, sugar water and fruit juice. Though, I don’t think it ever fully rebounded.

Given that December was the hottest on record in the U.S., had this butterfly missed the migration, lulled by the warmer weather in North Texas? 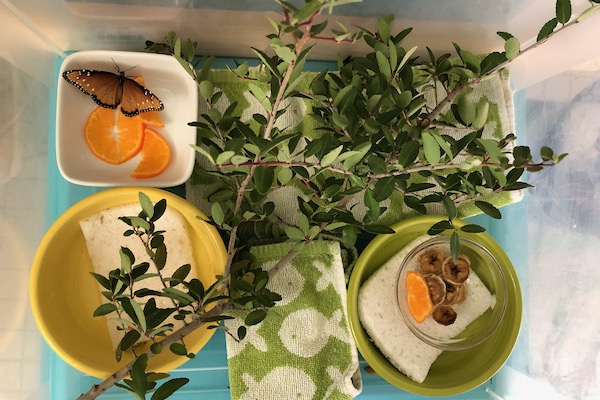 Our queen survived in the butterfly house we set up for two more weeks. Photo by Julie Thibodeaux.

According to the North American Butterfly Association, queen butterflies are typically seen in North Texas from May to October.

Sam Kieschnick,  a Texas Parks and Wildlife biologist based in DFW, speculates that our queen butterfly probably did miss the migration, or emerged from the chrysalis too early or too late.

Do all the butterflies we see in North Texas migrate?

No, according to Kieschnick.

While some migrate south to Central Texas or as far as Mexico, others don’t migrate at all.

“Honestly, some just die,” said Kieschnick. “Those nutrients are recycled in the ecosystem.”

Butterflies will hibernate at whatever stage in the lifecycle they're in.

“They seek shelter, under tree bark, and in other places where they can stay warm and overwinter,” said Marianna Trevino Wright, executive director of the National Butterfly Center in Mission, Texas. "Butterflies are cold blooded creatures, which means they require warmth in order for their biological functions to work. And so a freeze will freeze them dead. And they get cold stunned, just like reptiles, for example. And most butterflies have a very short life cycle to begin with.”

Species that don't migrate can survive winter freezes in at least one stage of their life cycle, to ensure that populations persist.

And some years, conditions allow some species to "stick around" even through cold stretches, said Kieschnick. He said it’s unusual to see some species of butterflies in North Texas up to the end of December. But then there are some butterflies that are active all year long.

“Like the orange sulphurs that we see right now visiting dandelions and henbit. They seem to have antifreeze running through their body,” he joked.

Red admirals and variegated fritillary butterflies are also commonly seen throughout the year in North Texas. 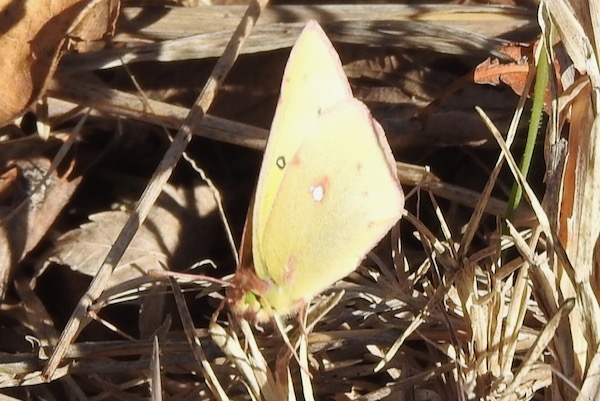 Orange sulphur butterflies, like this one photographed in Fort Worth on Jan. 23, 2022, are seen throughout the year in North Texas. Photo by Sam Kieschnick.

Some researchers believe that butterflies are a bell wether species when it comes to climate change.

At the National Butterfly Center in Mission, on the Texas border, they saw an “unprecedented bloom” of butterflies on New Year’s Day.

On Jan. 1, the Center experienced a record high temperature of 92 degrees and recorded 87 different butterfly species. They normally see about 25 different species at that time of year.

“It's because the plants are blooming and the temperatures are rising and everything's out of whack,” said Wright, director of the National Butterfly Center.

The New Year’s Day phenonenon was preceded by a heatwave from September to January 1 in the Rio Grande Valley.

“We see butterflies seasonally in blooms, just like flowers and plants,” she continued. “And so we normally don't see butterflies in the winter if the climate and the things that the climate controls, like our plants and wildlife, are all acting normally.” 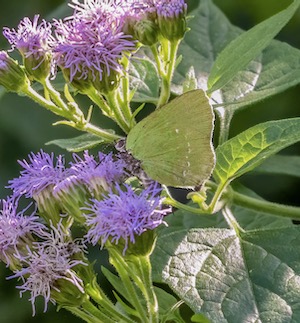 According to Wright, the Rio Grande Valley typically has more butterflies, in volume and variety, than any other place in the United States. That’s because they have 11 biologically distinct ecosystems in a small four county region. Plus, they’re on the northern edge of the Neo Tropics.

“So we have lots of endemic species of butterflies,” she said. “But we're starting to see more migrants and strays from central and southern Mexico and Central America. Human beings are not the only climate refugees.”

Wright explains that the aridity drives them farther north.

"Butterflies need moisture, and they get most of that from the air and from the environment. Even when they're in chrysalids form they need to stay moist. So the hotter and drier it gets, the more harsh and unsurvivable those conditions become for butterflies at every stage of their life cycle."

The North American Butterfly Association, the entity that founded the National Butterfly Center, recently posted an article about butterflies and climate change.

“Many studies have already shown that butterflies are among the species that have responded the most to climate change, usually in the form of northward or elevation range shifts,” says Astrid Caldas, the author of the article. “Climate change will also affect species’ life cycles, flight times, essential interactions, and ultimately survival.”

“Many studies have already shown that butterflies are among the species that have responded the most to climate change, usually in the form of northward or elevation range shifts.”

Kieschnick admits climate change is another challenge that insects face in their struggle for existence.

“Along with loss of habitat, overuse of pesticides, and I'm sure several other issues, climate change can especially threaten the organisms that migrate,” he said.

Wright predicts that as climate change brings more extreme weather events, it's also going to trigger more extreme wildlife events, such as what the National Butterfly Center experienced on Jan. 1.

She also referenced the “fish rain” in Texarkana on Jan. 4.

The North American Butterfly Association says there is a pressing need for a better understanding of how climate affects butterflies and moths.

Wright points out that a healthy planet depends on butterflies.

“Butterflies are the primary pollinators of our native grasses, wildflowers and trees. So the majority of vegetation on the planet relies upon butterflies for pollination. If we don't have butterflies, then we risk losing all of that vegetation that produces clean air, that filters water, that prevents rising radiant ground temperatures and holds soil in place from erosion from wind and water.”

In addition, caterpillars are a major food source for birds during breeding season.

So should you save a butterfly on the sidewalk, when you see it?

“We treat butterflies as these beautiful amenities to life on Earth, rather than an integral fundamental aspect of a sustainable planet.”

"This is such a hard question because it tugs at our heart-strings!" said Kieschnick, by email. "Honestly, when I see one, I let it be, even recognizing that it will die. I think of the nutrients that are recycled in the ecosystem — how the nutrients will feed the microbes in the soil, provide new growth for springs' flowers, likely flowers that the same species will use for nectar. It's a harsh reality, but death in nature is so essential for life."

"At the same time, I don't fault anyone that takes in a little bug to keep it warm," Kieschnick added.

Wright agrees that death in winter is a natural part of the butterfly life cycle and discourages keeping them captive. But she says it's time we paid more attention to what's going on with these often overlooked victims of a developing world.

“We treat butterflies as these beautiful amenities to life on Earth, rather than an integral fundamental aspect of a sustainable planet.”