Two Arlington businesses have roots in owners' love of trees 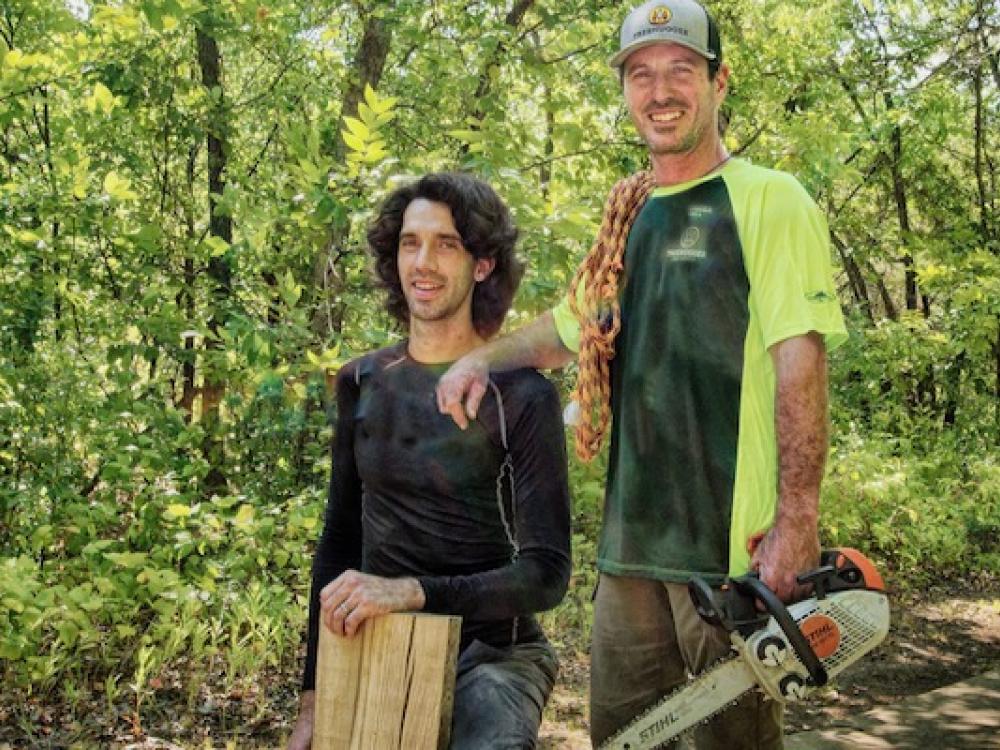 Caleb Geer of Urban Tree Merchants and Ryan Elliott of Treehuggers Tree Service are two Arlington neighbors with a passion for trees. Photo by J.G. Domke.

A few years ago, Ryan Elliott was working at a corporate job and was good at it but says “I wasn’t feeling a lot of purpose.”

The 40-year-old Arlington resident decided to quit and find out: “Where is my passion and what do I really want to be doing?”

His kids were teenagers and his wife was working full-time so he was able to reassess his career plans while doing some handyman jobs for family and friends. Then one day, down the street from his home, he watched his neighbor prune a tree in front of the house.

Elliott had a short list of future careers that he felt worth pursuing. Arborist was one of the avenues he had been exploring. An avid rock climber, he knew he could shimmy up a tree as well as a cliff face. He walked over and introduced himself saying, “It looks like you know what you are doing.”

That was back in 2016, when Caleb Geer was still a student at the University of Texas in Arlington studying electrical engineering. He had grown up in Highland Village in Denton County, helping his father, Scott Geer, a master arborist and tree service owner in Lake Dallas.

Geer, now 32 years old, realized he didn’t want to work for a big corporation and switched to a special studies program, where he could mix his math and engineering classes with entrepreneurship and marketing classes.

Geer had worked at his dad’s tree trimming business for several years. Hearing Elliott say he wanted to be a “tree trimmer,” Geer volunteered to walk over to his house and show him what websites to visit and tools to buy. Eager to take advantage of Geer’s wealth of knowledge, Elliott suggested they should work together. Geer needed a part-time job and agreed.

Soon, Elliott launched Treehugger Tree Service and started studying to become a trained arborist, joining the International Society of Arboriculture. He became a certified arborist in 2019.

The two neighbors, who by fate live on a street named after a popular tree species, shared a special appreciation for trees and an eco-friendly approach to tree care.

“Good pruning looks like no pruning,” says Elliott. “If you can go out and prune a large mature tree, invite a neighbor over and if it isn’t obvious to them, then you’ve done a good job.”

Meanwhile, Geer was bothered by the waste that is thrown away when large trees are cut down, whether it’s due to disease or development.

“We just throw away so much organic material and it’s old growth that took hundreds of years to get that big,” Geer said.

He wanted to not only save the wood but keep the CO2 out of the air, which contributes to climate change. Trees perform carbon sequestration until they are burned or decompose into mulch.

Climbing a tree one day, Geer says he wondered as he worked — what if he turned the saw sideways and cut the log longways?

“Then I just started tinkering with a chainsaw mill,” says Geer. 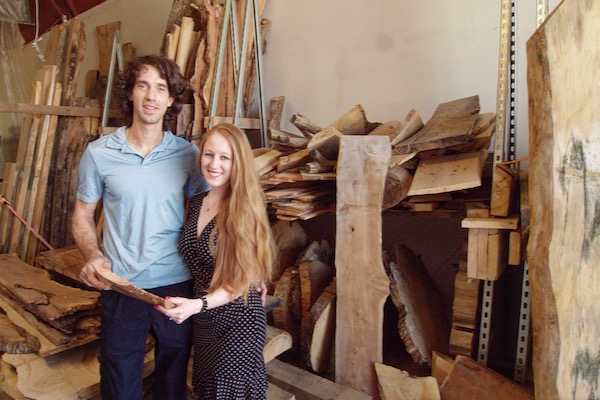 Caleb and Kelly Geer, owners of Urban Tree Merchants sell milled wood and home decor made from residential trees at their store in Arlington. Photo by J.G. Domke.

He built his own mill so he could go in a backyard and mill a log wherever the tree was felled. His custom design was mobile and light weight.

He knew there would be a market for the wood and the products made from them. He started making custom pieces for family and friends. Soon he was selling his wares at craft shows.

Caleb's father helped him set up his home workshop with equipment, including a kiln used to dry out freshly cut wood and preserve it. His father agreed that the waste from the tree trimming business could be put to more creative use.

“It was always on our radar to harvest urban wood,” says Scott Geer of his son’s conscientious impulse. “He took that idea and ran with it.”

In 2019, after graduating from UTA, Caleb registered the business as Urban Tree Merchants, taking the enterprise full time. His wife soon joined him.

In 2021, they opened a storefront in an industrial park on West Division in Arlington.

Today, they have a selection of kiln-dried hardwoods for hobbyists and craftsmen to buy for building furniture, picture frames and other decorative items. They also sell finished shelves, tables, fireplace mantels and cutting boards. All of the material comes from local residential tree work.

“We call ourselves a tree to table company,” said Kelly Geer. “We can do everything from fell the tree to making custom products.”

Caleb Geer is passionate about recycling wood, offering homeowners a chance to keep a memory of that old oak tree that had to be cut down by converting it into an end table. He helped one customer frame a picture of their old oak tree with wood from the tree. 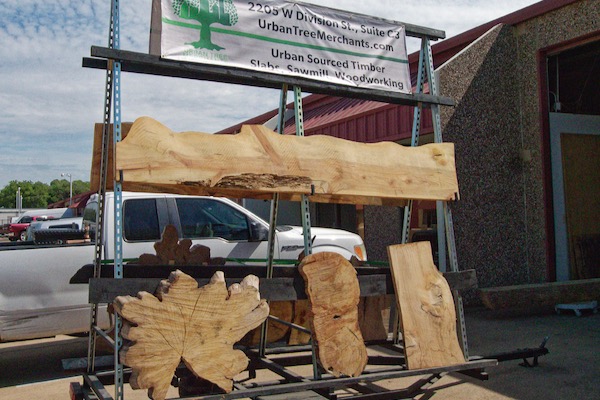 North Texas Woodworkers Association says they are delighted to find locally grown hardwood without the added expense of having to ship it from across the country or importing it from overseas. One woodturner in Dallas was also an apartment builder and hated to simply turn the trees that had to be chopped down into firewood and mulch. He contacted Urban Tree Merchants to repurpose the trees.

“Trees become an afterthought for most people,” says Elliott, whose tree service business supplies much of the material for Geer's work.

“Years of converting dirt, water, carbon monoxide into beautiful, strong useful wood and simply ending in a trash heap is just not right,” said Caleb Geer in an online post. “Therefore, I had to start doing something.”