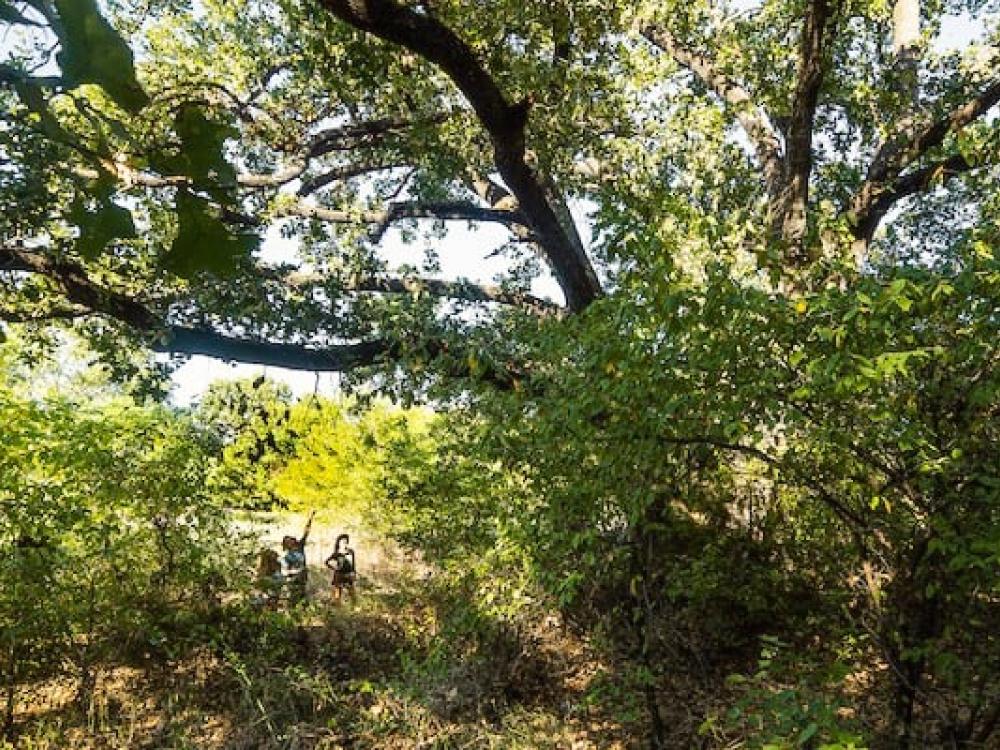 This 200-year-old post oak in Southwest Nature Preserve in Arlington was recognized as a historic tree by the Texas Historic Tree Coalition in 2019. Photo by J.G. Domke.

Arlington Council member Sheri Capehart wants to save trees. Especially the post oak, a species common to the region, known as the Cross Timbers. That’s why she's spearheading an effort to update Arlington’s tree ordinance.

The Eastern border of the Cross Timbers region runs from southeastern Kansas to Central Texas through Tarrant County. According to the Fort Worth Nature Center, early travelers through North Texas coined the name "Cross Timbers" due to their repeated crossings of these timbered areas that proved to be a barrier to their travel on the open prairies to the east and west.

One of its principle species, the post oak, aka the iron oak, lives for hundreds of years and they are a bit temperamental.

”They don’t like to be moved, they don’t like too much water and some think they don’t even like being looked at,” says Laura Miller, past president and board member of the Cross Timbers Urban Forestry Council in Arlington.

According to the Cross Timbers Urban Forestry Council in Arlington, the areas of ancient Cross Timbers still remaining are some of the last virgin North American hardwood forests. Two hundred to three-hundred-year-old post oaks can found at the Fort Worth Nature Center and Refuge, Lake Mineral Wells State Park, as well as private land.

An effort to save a historic post oak led to strengthening Arlington’s tree ordinance.

In 1993, Kmart tried to move the old Witness Oak on the Bardin family farm in south Arlington. The tree had been a landmark for a surveyor in 1856 and legend had it that a marriage wouldn’t really be official till it was witnessed under “the mighty oak.” 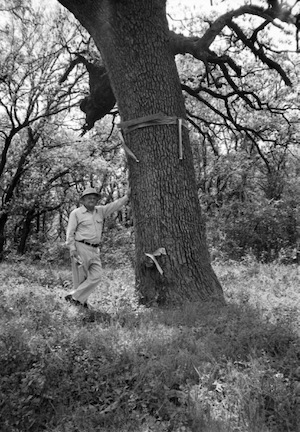 Bill Bardin with the Witness Oak in south Arlington in 1986. The post oak was estimated to be at least 200 years old when it died in 1992. Courtesy, Special Collections, UT Arlington Libraries.

Selling the land to Kmart in 1986, landowner Bill Bardin wanted to save the tree, adding a rider that the developer would have to pay $50,000 if the tree didn’t survive. It didn’t.

According to the book Legendary Locals of Arlington Texas, the company attempted relocate it 450 feet in 1991 but the stress proved to be too much. It was chopped down in 1993.

With the money, Bardin created a small park, The Witness Tree Memorial Garden, behind the shopping center today on Bardin Road and Cooper Street. This also motivated the City of Arlington to update its tree ordinance for commercial development.

The city’s tree ordinance went into effect in 1987 and today it fines builders when they remove a protected tree over 30-inches around. The developer can either keep the tree or pay $100 for every caliper inch, or, agree to plant new trees that add up to the circumference of the old trees destroyed. 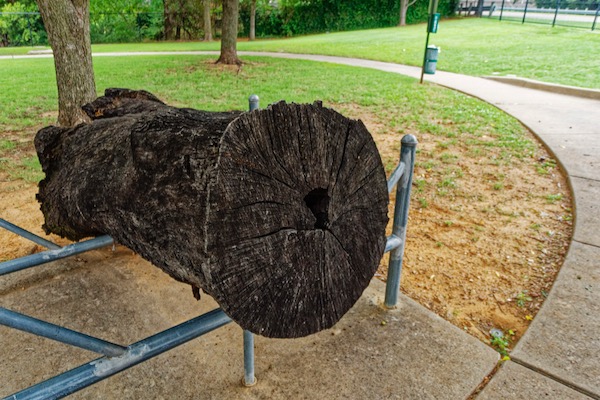 The stump of the Witness Oak is enshrined in a park behind the shopping center on Bardin Road and Cooper Street in Arlington. Photo by J.G. Domke.

Recently, local tree lovers got wind of a proposal by a developer to build on a 9.5-acre, wooded parcel at 1001 West Mayfield Road. Council member Capehart and the neighborhood association wanted to save the post oaks on the lot and didn’t want the Peyco Southwest Realty’s “Village at Mayfield Place” to ever get built on this oddly shaped triangular. It had been a horse ranch, then the area was developed in the 1960s. Now, the green space is surrounded by an industrial park on one side and the backs of shops and garages that line Cooper Street on the other.

The realtor hopes building 64 townhomes on the land will help the neighborhood grow, “be a nice new addition to the housing stock in this area of Arlington.”

Old aerial photos showed fewer trees, so present day trees are mostly newbies and all will have to go if the maximum number of units gets built. Arlington’s Unified Development Code mandates they plant 76 trees at least three inches in diameter to compensate for the existing trees the plan will be chopping down. (The tree ordinance allows developers to remove trees, but protected species must be replaced with other approved trees. Cottonwood, mesquite, hackberry, willow, honey locust are “prohibited species” and not counted. ) 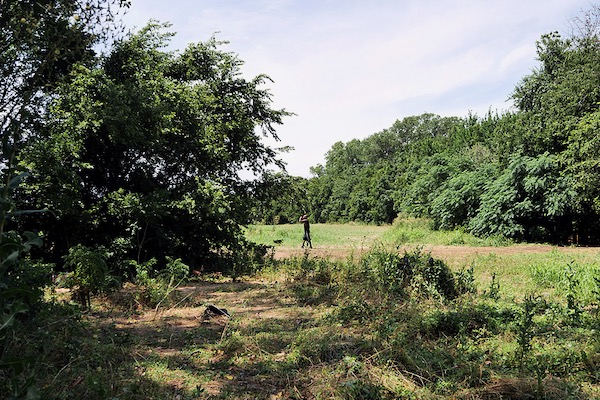 A neighborhood association and local tree advocates recently lost a battle to prevent a developer from building townhomes on this lot at 1001 W. Mayfield Road in Arlington. Photo by J.G. Domke.

When the motion finally came to a vote on June 30, 17 letters of opposition were sent to the Council asking for the land to be left untouched, hoping to preserve it as a nature area. The builder testified how they would have a dog park and a small nature area at the point of the triangle, but the trees had to be removed because of a drainage problem.

“Chopping down trees for a drainage problem doesn’t make sense to me,” says Miller. “Trees really do manage storm water: slows it down, uses some of it and traps a lot of it.”

The Heart of Arlington Neighborhood Association was not happy with the plan either.

“We cannot support development that continues to encroach on two of our largest assets, our natural creeks and Cross Timbers forest,” says Alicia Gray, president of HANA, which represents homeowners south of downtown Arlington to Pioneer Parkway. “We expect elected officials to follow the spirit of the City’s master plan and not try to hide behind an inadequate tree preservation ordinance.”

“We are sympathetic to the owner's need to realize a return on his investment, but there's a reason that property has escaped development all these years: It is a vital part of the Johnson Creek watershed,” said Darling, in her letter of opposition to the Council. “Those trees benefit all of Arlington, not just the immediate neighborhoods; and it would cost a fortune to try to duplicate the hydrologic and ecologic services of the existing healthy, functioning, natural ecosystem, with uncertain results.”

Arlington’s new Tree Ordinance update was introduced on July 7 for public review and may get approval as early as September.

Tree advocates are hoping the new ordinance will protect more native oak trees on commercial sites by preserving smaller trees starting at 18 inches circumference, compared to the current 30 inches or greater. Plus, it allows for 10 percent fewer parking spaces if the developer will preserve trees significant in size, species or stands located where parking lots are planned.

Miller who is also Commercial Horticulture Agent for Tarrant County at Fort Worth’s Texas A&M Agrilife Extension, is encouraged by the city’s plan to update its tree ordinance.

According to Miller, Arlington over-all does a good job with tree planting and conservation.

“[The tree canopy] is a unique and valuable thing for the community and we want to preserve it,” says Miller, “It adds economic value and that’s not a crazy thing to say.”