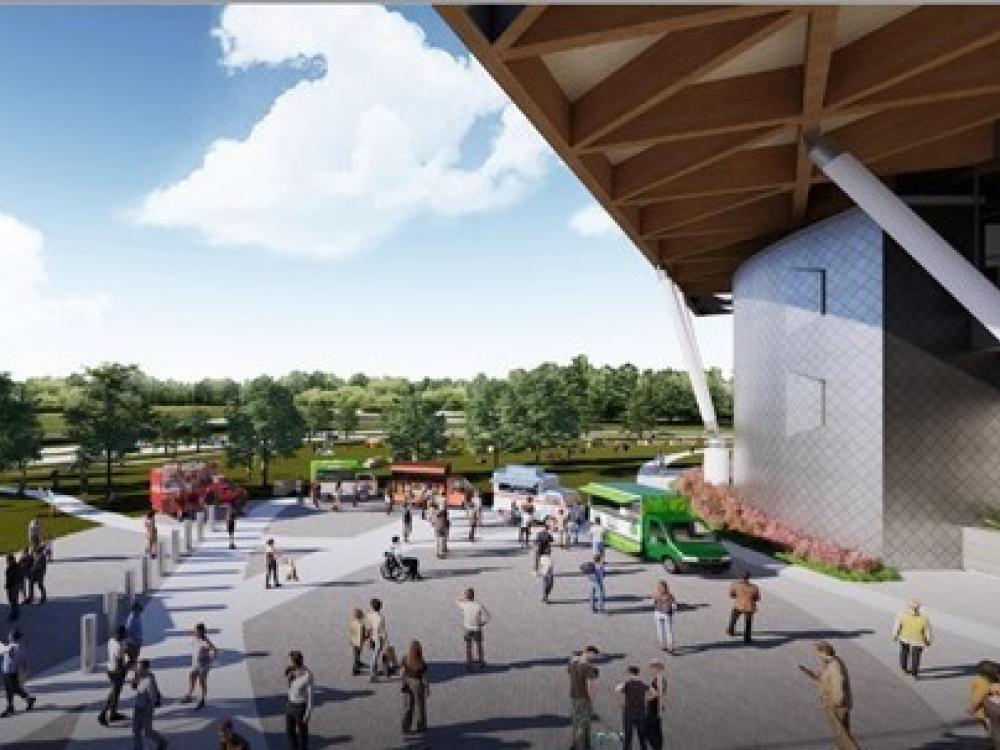 With an eye on transforming the way that it delivers services, the city of Fort Worth purchased the former Pier 1 building at 100 Energy Way in 2020 with plans to house 22 departments from 14 buildings.

With the redesign of the 20-story building underway, city leaders are using the move to meet the city’s ongoing sustainability efforts as well.

“As part of the city’s new building development program, a design to Leadership in Energy and Environmental Design Silver certification has been the standard operating procedure,” said Communications and Public Engagement director Michelle Gutt. “The future city council chambers will be aiming to design to a LEED Gold design and will meet or exceed the city’s commitment to LEED Silver Certification design standards.”

A design team was created to ensure that the city’s sustainability goals are being met in the new city hall. These efforts can be broken down into several areas including infrastructure, energy, daylighting and dark sky initiatives, landscaping, and repurposing policies.

Infrastructure improvements to the nearly 20-year-old building include lower flow plumbing fixtures, LED lighting and the use of materials such as concrete with higher solar reflectance index values that will reduce the heat island effect.

Gutt outlined the specifics of the city’s infrastructure efforts in terms of improvements to plumbing and the types of materials being used.

“The planned type [of toilet] is a high-efficiency toilet that goes beyond the standard and uses 1.28 gallons-per-flush, a 20 percent savings (6 liters v. 4.8 liters).

As of current plan, the marble, eucalyptus wood, and related materials in the lobby will be re-utilized and refreshed to meet the overall design. The design team is currently tracking to use recycled materials like cork for acoustic work, furniture systems that have a common spine to be used with updated finishes in the future and related elements.”

Energy usage has become an enormous issue in the construction industry and commercial real estate development. Engineers and developers are constantly looking for ways to make their buildings use less energy. One of the ways to do this is to harvest the energy available onsite.

“This fall, the design team conducted a wind study on the site to best understand where there may be wind tunnels or adverse effects to the wind circulation from the buildings on the site,” said Gutt. “The outputs of the study found that with the added elements and wind mitigation planning, the overall wind tunnel impact had been reduced greatly. The team is now currently studying if there is potential to capture wind energy through small wind turbine elements.”

Speaking of energy usage, with more and more people driving electric vehicles, Gutt added that the city is working with the design team to evaluate how many EV charging stations can be added within the current power capacity running to the site.

Another area that the city is analyzing to make the new city hall more sustainable is the use of lighting. The design team researched how “daylighting” or the use of natural light could play a role in various sections of the building and quickly noticed a common characteristic in city halls across the nation.

“Most [city council] chambers are traditionally in windowless rooms or in areas with minimal natural light entering the facility. This is due to the difficulty that can be incurred by having natural daylight interfering with the broadcast elements of the chamber,” Gutt said. “However, in the future chambers here in Fort Worth, a full sun study was completed, looking at all typical meeting times year round to ensure that natural light could enter the chambers without interfering with the broadcast. While the percentage of natural light will vary greatly throughout the year during the differing council meeting times and changing of sun angles, the intent is to leverage lighting controls to always leverage as much natural light as possible.”

While lighting in dense downtown areas helps people navigate their surroundings while maintaining an increased sense of security, too much of it can result in light pollution. According to the International Dark-Sky Association, to minimize the harmful effects of light pollution, lighting should only be on when needed, only light the area that needs it, be no brighter than necessary, minimize blue light emissions and eliminate upward-directed light.

One goal of dark-sky lighting, which the new city hall has adopted as part of its sustainability efforts, is to help maintain migratory bird and insect patterns.

Migrating birds typically fly at night and outdoor lighting can be a dangerous and even fatal distraction. The Lights Out Texas campaign recommends that building managers turn off outdoor lighting from 11 p.m. to 6 a.m. during peak migration periods.

The design team also looked at the site’s landscaping to determine what types of planting materials would be the most sustainable. They opted for native plants that have lower water requirements and mixed species of trees that will provide shade and help reduce the heat island effect.

To help conserve water when irrigating the landscaping, a weather-based system will monitor soil moisture, winds and precipitation.

Sustainability isn’t just about utilizing new technologies to reduce the dependency on natural resources. It’s also about using resources efficiently and repurposing what we no longer use so that it may have a second, or even third, useful life.

Reuse is an economically smart move as well.

The city had previously contemplated building a new eight-story building, estimated to cost $200 million, twice as much as the purchase of the Pier One building.

By bringing 22 departments under one roof in the new city hall, the City of Fort Worth will vacate 14 buildings, thus opening those spaces up for other organizations to use while saving taxpayers money.

“As part of the city’s relocation to the future city hall, 10 buildings will be sold and four leases will be terminated, generating more than $20 million in offset funding and vacating operating leases,” Gutt said. “As for the furniture in those buildings, the city will be evaluating the current status of the furniture in those buildings as they are sold and will as necessary explore options for relocation or donation through one of the city’s partners in this area.”

The city also worked to donate more than $130,000 worth of surplus furniture existing in the tower not planned for future use in the program.

“This surplus furniture has gone to more than 300 educators and non-profit groups in the Fort Worth area and will prevent a large amount of furniture from being placed in a landfill,” Gutt said.

Consolidating departments from various buildings into one city hall makes Fort Worth a leader in transforming service delivery with a nod to being more green, both environmentally and financially.

“Bringing together a high rise consolidation program is rivaled only by the Seattle Municipal Tower in Seattle, Washington,” said Gutt. “This move aims to release former city buildings to the public to create opportunities for economic growth and sustainability, while also bringing nearly 1,600 city staff out of aging, less efficient spaces into a high efficiency high rise.”

According to Gutt, the Future City Hall program will be completed in phases with the tower move-in starting in at the end of 2023 and completing in early 2024. The Council Chambers and Parking Garage addition originally scheduled for delivery in 2023, will also be completed in the first part of 2024, after encountering delays in the Federal 408 Permitting process due to funding shortages within the federal government's permit review program.

Colleyville-based writer Mark Fadden has been a scribbler for nearly 20 years and has covered everything from the state of jobs and careers in Fort Worth to unique spirits that might bring a little respite to the end of a stressful week. When he’s not writing about the news and events that shape our lives here in North Texas, you can find him struggling to keep up with his two strapping teenage boys, trying to keep his wife of 21 years happy (sustainably, of course) and separating out the non-recyclable plastic that the three people mentioned above keep throwing in the recycling bin.