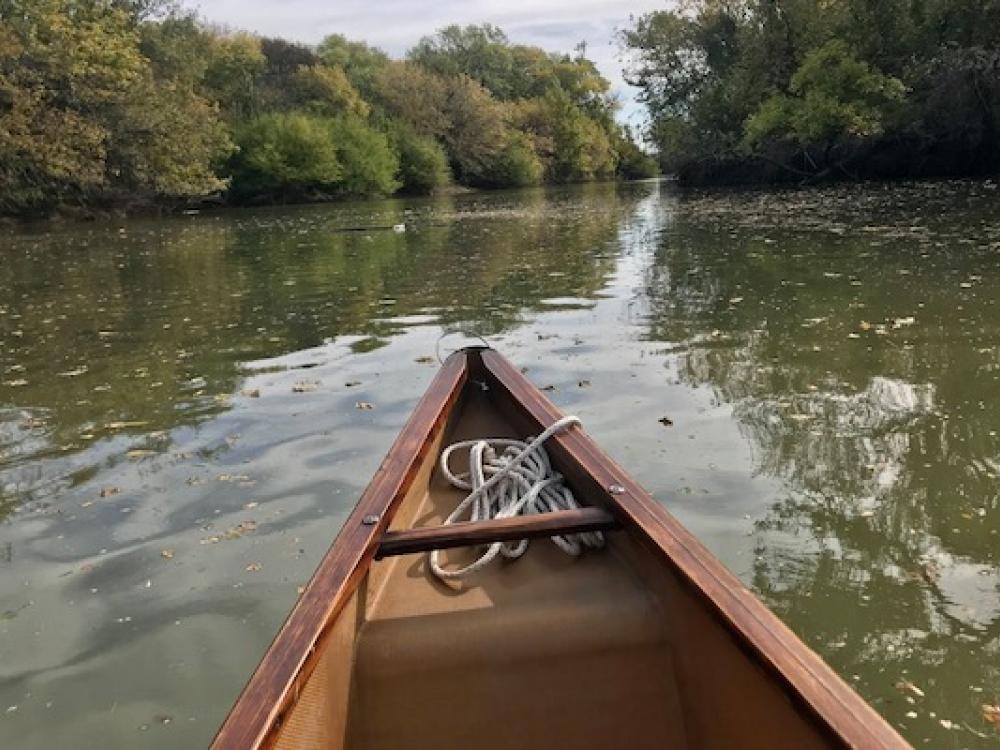 The Trinity River binds us. It is the fluid webbing that holds North Texas together. We live in its watershed and every drop of rain not absorbed by the soil heads toward the river. Often hidden by levees and dwarfed by industry, burdened by a polluted and unsavory past, it flows out of sight and out of mind.

But not to kayakers and canoeists who long knew what a treasure they had. They’d been floating the Trinity River and three of the forks that form it - Clear, West  and Elm - for decades.

Two years ago, Trinity Coalition began convening efforts from the Dallas Down River Club, the North Central Texas Council Of Governments, Texas Parks and Wildlife and others. Soon, the Trinity River Paddling Trail was born - with 21 launch spots on 130 miles of river.

The effort paid off big time. In late October, Secretary of the Interior David L. Bernhardt announced the Trinity River Paddling Trail’s inclusion in the National Parks Service by naming it a National Recreation Trail. The other Texas trail included, Knobby Knees Trail, is also on the Trinity northeast of Houston at its southern end. They join 28 new national recreation trails in 25 states that added more than 1,275 miles to the National Trails System.

"We spent much of the last year doing outreach presentations and paddle trips to let people know about the trail, and the results were amazing," says Teresa Patterson, Trinity Coalition’s Trinity River Paddling Trail manager. "The local paddling community in North Texas has grown to 10,000 paddlers or more. And once the trail goes live on the National Park Service website, that number is sure to grow even higher."

The designation of the Trinity as a National Recreation Trail and National Waterway means we have come a long way in the perception of the Trinity River in the last 30 to 40 years, said Brett Johnson, senior environmental coordinator and urban biologist for the city of Dallas

“Historically and ecologically, the Trinity River has acted heartbeat of the DFW area,” said Johnson. “The Trinity and its associated forests are a treasure to the people of Dallas, and surrounding communities.”

Watch a 5-minute video about the Trinity River Paddling Trail produced by Texan by Nature in 2019.

FROM REFUSE TO REFUGE

The Trinity is home to North Texas's two largest nature preserves, the Fort Worth Nature Center and Refuge and the Lewisville Lake Environmental Learning Area. The river and its reservoirs are our primary water source. At times rejected and forgotten, paid attention to only when it floods, valued solely for its ability to carry toxic trash downstream, the river is transforming from a place of refuse to one of refuge.

The Trinity has a reputation as being one of the most polluted rivers in Texas, one that has only recently begun abating. In the 1920s, the West Fork earned the notorious moniker of River of Death when the Stockyards dumped blood and carcasses into the river. In the 1950s, a 100-mile stretch south of downtown Dallas was decreed as septic. In 2010, it was ranked one of the top three polluted rivers in Texas.

The most common pollutant now is E. coli, a bacteria found in fecal matter. According to a 2020 study by graduate students from UTA’s Institute of Urban Studies, led by Amruta Sakalker, and commissioned by the Trinity Coalition, "Trinity River has an overall grade of B-, which indicates that parts of the river meet the swimming standards most of the time. The Elm Fork has a B+ rating, meaning 85 percent of days within compliance range, and is the safest for swimming and boating."

Once you're on the river, the city often subsides from view. At times you float through a corridor of trees, immersed in the aquatic habitat of fish, turtles and snakes, along with waterfowl and shorebirds. Most of the Trinity River Paddling Trail sections, defined as from launch site to launch site, emphasize the river's wild areas. Unchannelized sections with the river's original meanders provide a remote feel along with an exhilarating paddling experience.

“At any of the Dallas canoe or kayak launches, you can see unique sights, sounds and interesting wildlife,” said Johnson. “Who knows? You might spot an otter, deer, or even a bald eagle. So get out there and check on the newest nationally recognized waterway.” 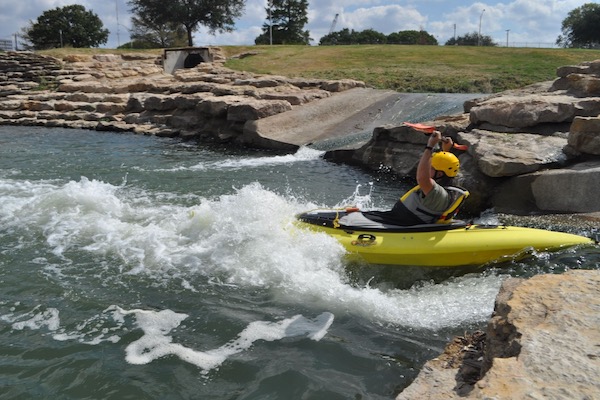 A kayaker runs a whitewater feature contained in a low-head dam along the Clear Fork in Fort Worth. Photo by Teresa Patterson.

Steve Smith, founder of the Trinity Coalition, says the Trinity River Paddling Trail is putting North Texas on the map - literally - and will soon be attracting nature lovers across the U.S.

"The National Park Service website gets over 100,000,000 visits a year," said Smith. “Almost all from people who want a nature experience with National Park standards. Until the Trinity River Paddling Trail, DFW wasn't even mentioned on their website."

The Trinity Coalition's ultimate goal is to develop North Texas as a nature tourism destination, showing that preserving nature and providing trails has economic benefits. The nonprofit views the Trinity River Paddling Trail as anchoring their long-term vision of coordinating thousands of acres of public natural space along the river into an attraction marketed as Trinity Nature Park.

"When people come to the area for a business, they may be interested in hiking, biking and paddling before heading back home," says Dale Harris, the Coalition’s the Trinity River Paddling Trail chair. “We need to market DFW this way. Even better, we have four nature learning centers - Fort Worth Nature Center & Refuge, River Legacy Nature Park, Lewisville Lake Educational Learning Area and Trinity River Audubon Center - on the paddling trail, so visiting parents can find activities for kids."

Harris believes the TRPT can help pull together the nine cities and three counties along the trail to develop a shared vision for North Texas nature tourism.

"Along or near the paddling trail, there are paved bike and hiking trails, soft-surface hiking and off-road biking trails, parks and preserves, and lakes and reservoirs, giving folks even more reasons to visit the DFW area,” he said. 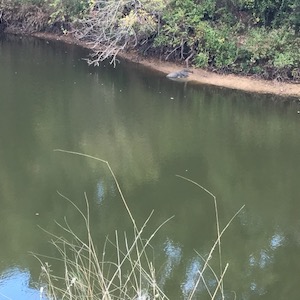 A gator suns herself on the bank below at the Fort Worth Nature Center. Photo by Julie Thibodeaux.

Carrollton parks manager Kim Bybee agrees. She says the new trail’s designation is a boost to the region’s many local outdoor offerings.

“Having the trail officially named a National Recreation Trail and National Waterway is a welcome addition to meeting the growing demand for nature-related recreation and eco-sensitive development in Carrollton and the Dallas-Fort Worth Metroplex,” said Bybee.

Rob Denkhaus, manager for the Fort Worth Nature Center and Refuge said he is thrilled that the Trinity River Paddling Trail, including FWNC’s stretch of the West Fork of the Trinity River, has been designated a National Recreational Trail by the National Park Service.

“Over 60,000 people visit the Fort Worth Nature Center annually, many to canoe and kayak the West Fork. We hope that this designation will entice even more people from DFW and the nation to experience native, natural North Texas at its best.”

“We love it. It puts Fort Worth on the map in a completely different way. With eco tourism on the rise, this gives people an additional reason to come here or if they’re here to stay a little longer.”

THE WISDOM OF THE RIVER 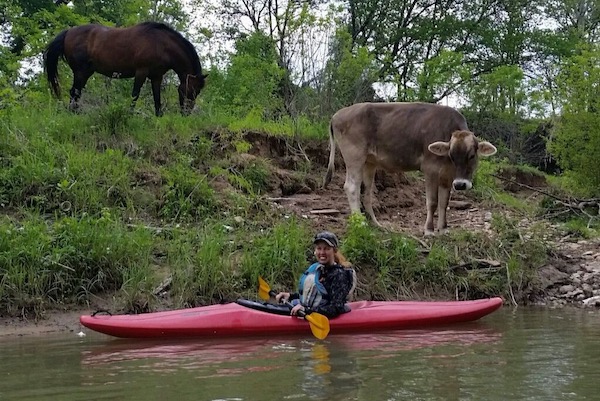 Teresa Patterson stops to visit with some curious onlookers along the West Fork of the Trinity River, near the old Randol Mill ruins in Arlington. Photo by Charley Kemp.

Smith of the Trinity Coalition adds that the trail’s designation not only helps tourism but serves to introduce North Texans to the value and beauty of this natural resource.

"For thousands of years, the Trinity River has sustained life here," Smith says. “And it is the reason that Dallas and Fort Worth are located here. Everyone in DFW uses water from the Trinity River and its reservoirs. We should all care about what flows here. A good way to personally connect to our river is to spend time communing with it."

Patterson agrees, pointing out that once people get on the water, they start to understand how the river works and interacts with the land and its watersheds.

"Rivers have an enchanting duality in that they are both timeless and ever-changing," says Patterson. "Once you understand that the flow cannot be entirely controlled or predicted, just appreciated, you start realizing that riding the currents of a river is a lot like surviving in the world. You have to read the river and ride the currents. And you start to appreciate the long view." 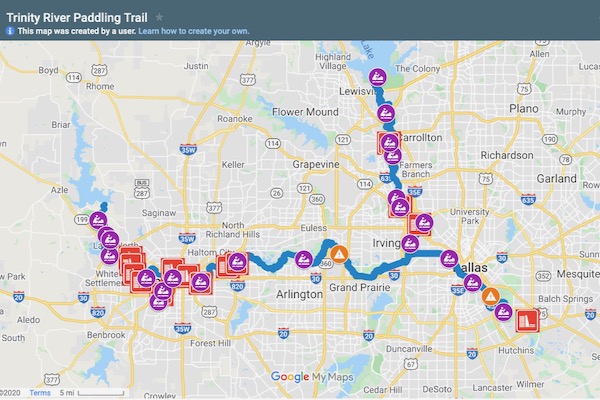 Major natural attractions with the Trinity River Paddling Trail launch sites include (going from upstream to down):

About: In October, the Trinity River Paddling Trail was designated in a National Recreation Trail and inclusion in the National Parks Service. The trail features 21 launch spots on 130 miles of river in the North Texas area.