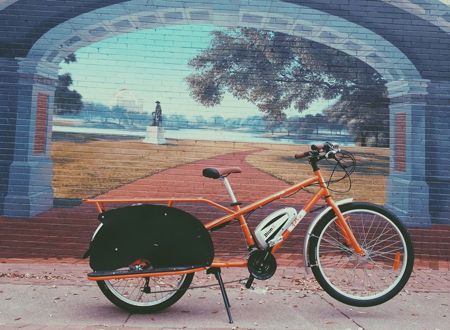 Ditching a gas-guzzling car for an emissions-free bicycle is a lot easier since electric bikes rolled onto the scene in Dallas-Fort Worth.

One local e-bike user, who purchased his bike in late 2012, says he found out about e-bikes on the internet and was immediately intrigued. 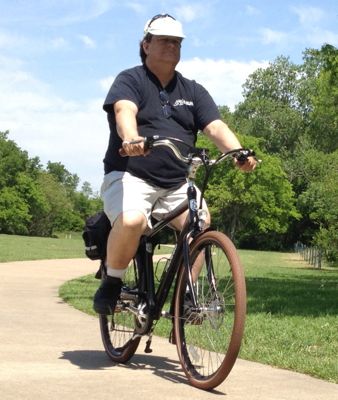 Brad Sloan now travels on his bike to run errands and take in the sights, while getting some exercise.

Left, Brad Sloan on his e-bike.

Although the Arlington resident says he lives too far from work to ride to his job as conductor for the Dallas rail line, he points out that electric bikes are welcome on DART and the TRE.

Sloan bought his electric bike from Rocket Electrics, an Austin-based company, and says the bike will run 20 miles without pedaling and about 40 miles when he does pedal.

“You can pedal as much or as little as you want,” Sloan explains. “It works and looks just like any other traditional bicycle, but can give you assist when needed.”

Sloan used to ride a motorcycle around town but traded it for an e-bike, believing it would be safer. Plus, he said he was out out of shape and thought the electric assist would allow him to build up his endurance gradually.

"When I get tired out, I let the motor take over completely,” he said. “This bike has plenty of power to get me up hills and into strong head winds so Lance Armstrong’s got nothing over me, dope or no dope. I am a fat, somewhat out of shape guy, but can ride with the best. This bike and others like it could help thousands to get back into bike riding again or for the first time.”

If you’re sold on owning an electric bike, there are a few places in the area to get more information, custom order or even ride a demo, including Colonel's Bicycles on South University Drive in Fort Worth, Custom Scooters on East 15th Street in Plano or Small Planet E Bikes, which opened last month on West Davis Street in the Bishop Arts District in Dallas. 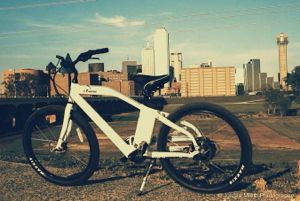 Tom Wilson, owner of Small Planet E-Bikes, says the first thing to know about e-bikes is that there are many different kinds, with some built for comfort and others for speed.

“The best ones will all have lithium batteries,” he says. “It is also very nice to be able to charge the battery either on the bike or remove it in order to charge off the bike. Many e-bikers are commuters and like to charge up the battery while at work.”

As for why to switch to an e-bike, Wilson says the range is impressive – most e-bikes can go up to 50 miles on a single charge. In addition, he says it’s cheaper than commuting by car and will keep you fit.

Small Planet E Bikes carries bikes from manufacturers from around the world like Currie Technologies, Pedego Electric Bikes, Stromer and Yuba and the pricing is anywhere from $2,000 to $5,000.

“Many people are afraid that they are not in enough shape to ride a bike or have infirmities that make it hard,” Sloan said. “With electric assist riding, there is no more fear of going too far and not being able to make it back. Pedal all you want, then if you feel you need help, it's there for you since the motor does all the hard work, hills seem like flat land and head winds are no problem. Getting more butts on bikes is what electric bicycles are all about.”