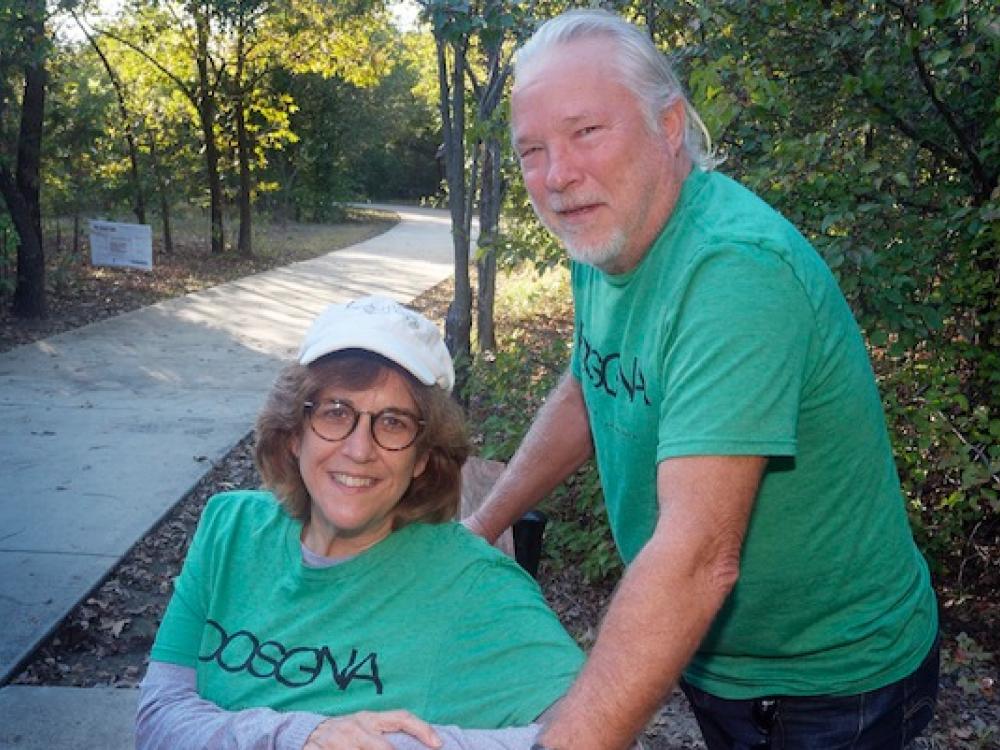 Nearly 25 years ago, Carrie and Kevin Donovan first went to the city of Arlington to push for preserving their favorite walking spot, now the site of O.S. Gray Natural Area. Photo by J.G. Domke.

It was a fitting celebration for the 20-acre neighborhood park at 2021 West Abram Street, which has been kept as a wildscape, thanks to a forwarding thinking Arlington couple.

In 2010, the ribbon cutting was both the end and also the beginning for Kevin Donovan who along with his wife Carrie and their three kids had been fighting since 1996 to preserve the old pecan nursery that Oscar Somers “O.S.” Gray had operated from 1932 to 1986. 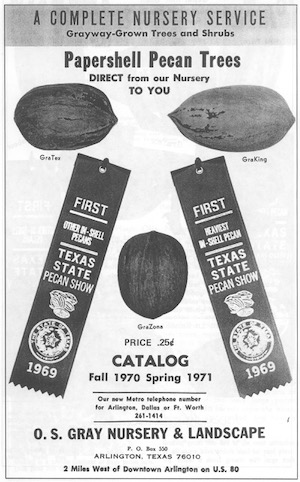 Pecan pioneer Gray moved to Arlington in 1926 to teach agronomy at North Texas Agriculture College, now the University of Texas at Arlington.

While teaching, he bought 46 acres to plant pecan trees to use as a living laboratory and to serve as an additional source of revenue, according to a city of Arlington feature. The nursery soon became his full-time occupation. Over the years, he crossbred the State Tree of Texas and created several new varieties: GraKing, GraZona, GraTex and GraPark Giant.

He developed large pecan nuts with paper thin shells, dubbed "papershell" pecans. Many pecans planted by Gray still stand on the campus at what is now the University of Texas in Arlington. The old main post office even displayed a mural showing people picking pecans. (The restored mural now hangs in The Amon Carter Museum.)

The Donovans, who moved to Arlington in the 1980s to raise a family, often walked from their home to the old neglected pecan nursery. Strolling through rows of pecan trees with their kids, they explored the woods looking for wildlife, flowers and picking pecan nuts.

Their daughter, Annie, who was eight years old in 1996, had been driving them nuts asking every time they drove by or went to explore, “When are they going to make it a park?”

This motivated her parents to do something.

“Let’s go see about it,” said Carrie Donovan, then 37 years old, raising three kids who were six years to 10 years old. “We we’re just so naive,” she says in hindsight.

They decided to go to a Arlington Park and Recreation Department monthly board meeting and were surprised to discover the department was submitting a bond request to develop more parks.

But they were told: Sorry, it was too late to add another park to the proposed bond package.

According to the Donovans, one board member did listen. Lisann Peters realized O.S. Gray nursery was a bit of history that needed to be preserved. She convinced other board members to change their minds and by the end of the meeting they added it to the bond proposal. 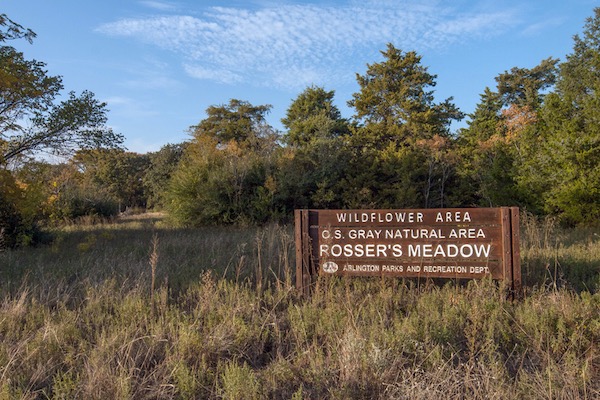 Part of the land for O.S. Gray Natural Area was purchased from the Rosser family. The land included an old growth post oak forest as well as a wildflower meadow. Photo by J.G. Domke.

The Arlington City Council now had to approve issuing a bond proposal. The Council had to decide how much, how big a bond was needed and then get it on the ballot for a public election.

The Donovans were nervous. Maybe the city would cut back funds and wouldn’t save the nursery. To their surprise, they started getting phone calls from neighbors offering to help. They weren’t going to fail their daughter.

Going door-to-door passing out flyers, Kevin Donovan, then 42, with his 10-year-old son, Eamonn, just happened to knock on the door of city council member Dottie Lynn.

“We told her we wanted the city to buy the 50 acres,” he remembers.

And she said no, but liked the idea of creating a park on maybe a couple of acres.

Residents at the townhomes development Arlington Downs offered their clubhouse, and the neighbors started holding meetings to build awareness and get support for preserving the orchard.

“People always said, ‘Oh my mom or my grandfather told us how we should buy a tree from this Gray nursery,’” remembers Kevin Donovan. “A lot of people knew about it and wanted to preserve it.”

The Donovans along with other supporters attended every city council meeting for months. Would the City Council cut the O.S. Gray park from the bond package? Council would finally vote on it in December 1996 and included O.S.Gray park. 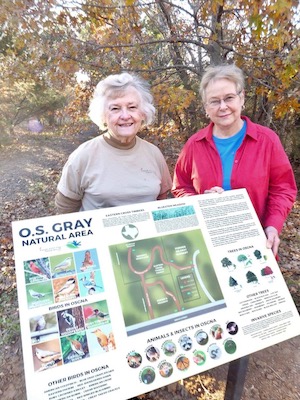 The Donovans couldn’t sit back and just wait for the election. There needed to be a rally, a demonstration to show the community support. Why not a parade? Arlington holds a yearly Fourth of July parade, so the Donovans contacted the parade committee for ideas. A week before the bond election, even though it was a cold January in 1997, they decided on having a Parade for Parks.

The new entertainment district trolley service donated one of their trolleys. The mayor and families with their children from all over the city bundled up in 14 degree weather. And 200 people carried signs as they marched five blocks from the UTA Maverick Stadium to the Arlington Downs clubhouse on West Abram, where they warmed up and turned it into a party.

Later in the run up to the vote, Arlington Conservation Council members canvased for the cause by phone banking for the bond package.

The bond passed in 1997. Kevin Donovan remembers it was the largest margin of victory of any bond package passed in Arlington.

But it takes time for a bond to get implemented so after the bond passed, the Donovans convinced the nonprofit Trust for Public Lands to buy both the section of the nursery and a small farm owned by the Rosser family next to it, which included an old growth post oak grove and a wildflower meadow. Through their agreement, descendent Larry Rosser was allowed to live on the property until his death in 2004.

The city finally bought the land from the Trust, but the city didn’t have funds for turning it into a park. This took another bond passage in 2008.

A plan was drawn up for the park. The Homeowners Association across the street protested having the parking lot directly across their entrance. They feared it would make it too easy for robbers to rush through the entrance gate. So the Park and Rec department felt it had to create three different layouts for this new park. The Donovans were back in action. They wanted to preserve the woods. No soccer field, save the trees.

Finally, the city settled on a compromise plan that moved the parking lot but saved most of the trees. The nature area was preserved and the O.S. Gray Natural Area ribbon cutting finally happened 10 years ago on Oct. 2, 2010. But it doesn’t end here.

YOU GOTTA HAVE FRIENDS 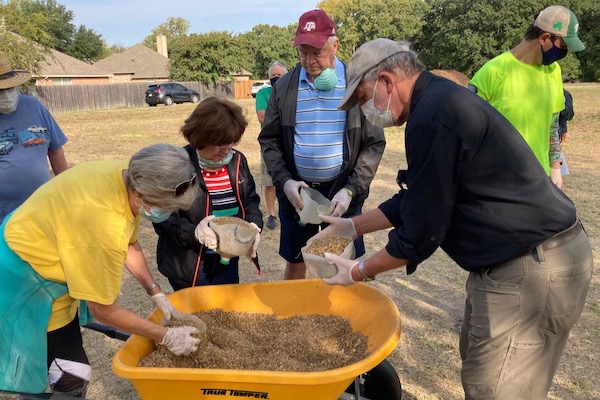 Classified simply as a neighborhood park, the Park and Recreation Department didn’t budget funds to maintain trails, control invasive plants or encourage people to get out and enjoy nature. So the Donovans decided to create the nonprofit organization Friends of O. S. Gray Natural Area the same year as the ribbon cutting.

It’s rare for a city park to have a community volunteer group. With more than 90 parks in Arlington, along with O.S. Gray, there are just two other park volunteer groups: Molly Hollar Wildscape in Veterans Park and Friends of Southwest Nature Preserve.

The River Legacy Science Center is a nonprofit but only maintains a small section of the city’s River Legacy Park.

A decade later, the Friends of O. S. Gray Natural Area is still going strong. They hold monthly board meetings. Then on the second Saturday of every month, the group hosts a “community day” where volunteers spruce up the native plant display, install benches, paint, remove invasive plants like privet and maintain trails that wind through the park. 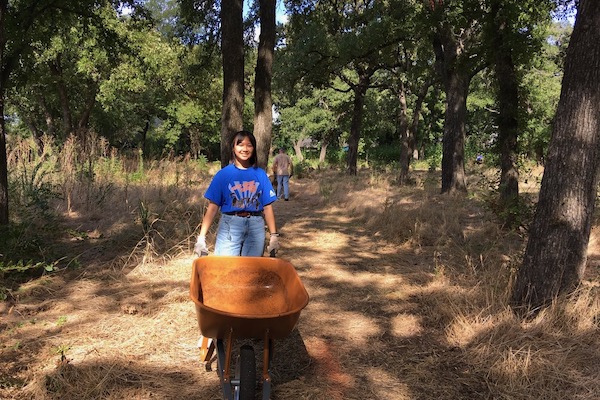 The mission for Friends of O. S. Gray Natural Area is to promote the park and provide educational opportunities about nature. They also host regular Star Parties with members of the Fort Worth Astronomical Society setting up telescopes for kids. The events also features storytellers and roasting hotdogs and marshmellows over a fire.

“We remind people that nature is not only around us but above us, in the sky as well,” says Carrie Donovan.

Three years ago they launched the Chalk the Walk art contest.

“We plan to continue enhancing, restoring and managing the natural area,” he says by increasing educational activities like nature walks and park tours.

“For the immediate future, our challenge is negotiating our way through the pandemic and how we keep our volunteers and supporters engaged with us.”