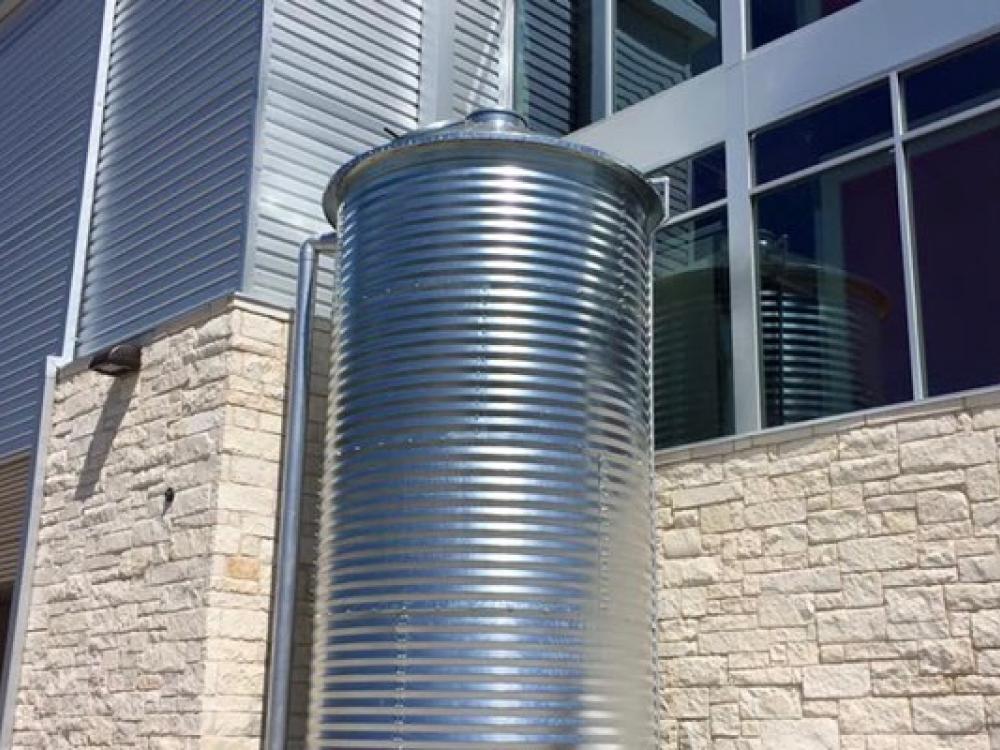 Speakers will talk about the current state of Texas' water supply, threats and conservation methods on Sept. 17. ​ Above, a rainwater catchment system. Courtesy of Innovative Water Solutions, one of the speakers at the conference.

Ever wonder how North Texans’ water supply will cover our thirst, showers, laundry, irrigation, infrastructure, energy production and industry, not to mention water parks, as the population doubles in the next 35 years?  By 2060, planners say. Ever question if rising average temperatures and extreme weather events may be affecting the water supply? Perhaps what captures your attention is simply how to manage the yard during city watering restrictions, or cut the home water bill.

“DFW: Thirsting for Our Water Future” on Sept. 17 in Richardson, the region’s first conference of its kind, seeks answers for both big-picture thinkers and practical homeowners. Seven noted policy experts and scientists will dive into water planning and quality issues. Four environmental and industry leaders present innovations for water conservation at home, from efficient appliances to drought-hardy landscapes and rainwater harvesting.

Why a public conference on big-picture water issues? Because North Texans are water hogs, and because the solution offered by our region’s water plan, to summarize Clean Water Fund’s 2015 assessment at the plan’s public hearing, is illogical, unnecessarily costly and politically problematic.

El Paso residents, and San Antonians after concerted reductions, used an average of about 130 gallons per person per day, as of 2013, according to Texas A&M ecology professor Kirk Winemiller in a Corpus Christi Caller-Times article. DFW residents used more than 200 gallons, on average, in 2012, reported the Dallas Morning News. (That average included consumption rates from 110 gallons a day by Dallas residents to 364 gallons by denizens of affluent Highland Park.)

The hope is that conservation-savvy consumers will implement water-saving strategies at home and advocate to local municipalities to reconsider North Texas’ Region C water plan. One thrust of the conference is to educate on options available, the least costly of which include an array of conservation strategies.

An alternative water technology, Aquifer Storage and Recovery, or ASR, is a highlight of the conference. ASR involves storing water in underground aquifers, rather than fast-evaporating surface reservoirs. It’s used successfully in San Antonio and other Texas cities. Robert Macias, plant manager for the San Antonio Water System, presents this method that employs reinjection of potable water into the aquifer below for later recovery and use.

Statewide challenges affecting North Texas long-term are spotlighted by the conference’s three keynote speakers. Carlos Rubenstein, former chair of the Texas Water Development Board, the statewide water planning agency, assesses the condition of the natural water resources that we rely on for drinking water.

“Drought, deluges and dilemmas” brought on by climate change, and what may lie ahead, are tackled by Texas state climatologist Dr. John Neilsen-Gammon. Liz Fazio, director of the Texas Water Foundation, explores measures to ensure present and future water supply.

Water use in energy production is in the public eye, with hydraulic fracture drilling’s demand for vast quantities of water. All types of power generation require large but varying water volumes. Conversely, water infrastructure takes massive energy to build and to maintain. That “critical, mutually dependent relationship” is examined by Dr. Carey King, assistant Director, UT Austin Energy Institute, for its impact on water planning.

"Region C has minimally used conservation as a tool by which to secure more water, even though it's the cheapest and most immediate source," says Beving.To meet increased demand, the plan relies on building new reservoirs at a construction cost estimated at more than $21 billion, when more efficient water storage technology used in other parts of the state is available at one-third that, Beving points out.

Although DFW’s average annual rainfall is 36 inches, the surface evaporation rate—as from an open reservoir— is 20 inches higher, data shows. In addition, proposed reservoirs would be located outside Region C in neighboring East Texas, where the planned Marvin Nichols reservoir would take farms, ranches, timber lands and popular recreation areas through eminent domain, as well as eliminating the revenue they produce.

Residential water topics appear in breakout sessions concurrent with those on technology and planning.

DFW: Thirsting for Our Water Future