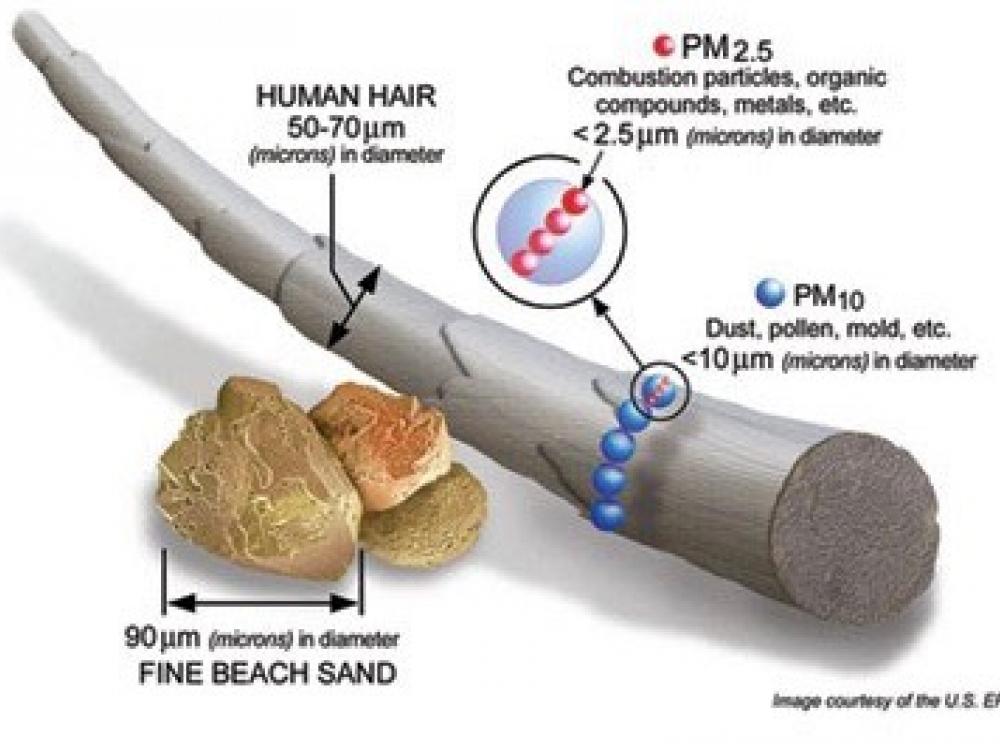 A consortium of universities, environmental groups, civic leaders and volunteers want to draw attention to problem of particulate matter in North Texas. Courtesy of the U.S. Environmental Protection Agency.

What you can’t see can kill you: bacteria, carbon monoxide. Particulate matter. This dry, wonky name covers an array of very small airborne junk that messes with human health big-time. From coarse cement dust to invisibly fine toxic particles produced in combustion, whether in forest fires or car engines, particulate matter, aka PM, is related to many serious health problems. It blows in road dust, off construction sites, out of smokestacks and tailpipes. Now it’s the focus of serious attention from North Texas scientists, environmentalists and community leaders.

A “No Safe Level” campaign is on, started by DFW-based clean air advocacy group Downwinders at Risk. They aim to develop a citizen-run regional network of air monitors to measure particulate pollution. That isn’t done adequately by national and state authorities, say supporters.

“No safe level” was the conclusion of a 2017 study by Harvard School of Public Health of 60 million people, and the effects of PM exposure. Researchers found that harm is done by exposure at even the lowest level tested, five micrograms per cubic meter of air. The U. S. Environmental Protection Agency standard allows more than double that, 12 micrograms per cubic meter.

The health risks affect asthma sufferers, sports players, the elderly, the young and anyone living close to pollution sources.

“The smallest particles can cross cell membranes into the bloodstream and be transported to organs and tissues throughout the body,” Dr. David Lary, research physicist at University of Texas at Dallas, informed city of Dallas representatives late last year.

Coarse dust particles (PM10) are 2.5 to 10 micrometers in diameter. Sources include crushing or grinding operations and dust stirred up by vehicles on roads. Fine particles (PM2.5) are 2.5 micrometers in diameter or smaller, and can only be seen with an electron microscope. Fine particles are produced from all types of combustion, including motor vehicles, power plants, residential wood burning, forest fires, agricultural burning, and some industrial processes. Courtesy of the U.S. Environmental Protection Agency.

He reported for a consortium on air research hosted monthly by UT Dallas. Councilwoman Sandy Greyson was among participants in an informal City Hall think tank on PM pollution in 2017, informed by Dr. Lary and others. County Commissioner Theresa Daniel has drafted a resolution for regional governments to accept a donated network to support monitoring.

These particles are one-fifth the diameter of a human hair, measuring less than 2.5 micrometers (a millionth of a meter.)  They’re associated with effects on five major body organs and systems: lungs, heart, brain, reproductive and endocrine systems. Those health effects include “heart attacks, strokes, asthma, COPD… Dementia, Parkinson’s and Alzheimer’s, and neurodevelopmental disease including autism spectrum disorders,” recounted Lary.

Airborne mess is North Texans’ history, with some 25 years of breathing air that has never met federal Clean Air standards for ground-level ozone, another prime cause of respiratory diseases and other health hazards. Now, faced with the facts of PM pollution, UT Dallas, UT Soutwestern Health Science Center along with local environmental groups, civic leaders and volunteers are poised to take it on.

“No Safe Level” board chair Evelyn Mayo and four others on the all-woman board have worked since June 2017 to launch the effort. They host monthly public information meetings at the Meadows Conference Center in East Dallas, continuing on March 10 from 2 to 4 p.m.

Now, faced with the facts of PM pollution, UT Dallas, UT Soutwestern Health Science Center, along with local environmental groups, civic leaders and volunteers are poised to take it on.

“Downwinders will continue outreach and advocacy efforts at community events, Earth Day Texas and our annual Root and Branch Conference later in the year,” said Mayo. “Our goals are to raise awareness, seek participation and look for opportunities for monitors,” Shannon Grimble added.

The effort focuses on developing a monitoring system to put in residents’ hands that will provide accurate information on particulate pollution sources and pinpoint locations for solutions.

“Our first job is to help map PM pollution hotspots in DFW,” said Jim Schermbeck, director of Downwinders at Risk.

High-tech air monitors networked across North Texas is the vision. These would be run by volunteers, such as graduate students in science, concerned parents and conceivably, volunteers from the communities most affected. Those include low-income earners and people of color living in neighborhoods where, often, freeways and polluting industries are sited nearby.

“Our first job is to help map PM pollution hotspots in DFW,” said Jim Schermbeck, director of Downwinders at Risk.

According to Schermbeck, DFW air is notably under-monitored.

“There's one PM 2.5  monitor in Dallas County, one in Tarrant County and one in Denton County. Sometimes the city of Dallas will count a PM monitor it has in West Dallas.”

There’s none in Wise County, a hotspot for oil and gas drilling.

“That’s one monitor for every two million or so souls here in DFW, spread over an area the size of several New England states. Eventually we'd like to see one every half kilometer or so, depending on the location.”

Dr. Lary reported that the effort already has a total of about 40 PM monitors to start the network, including ones donated from the manufacturer and others funded by Earth Day Texas and UT Dallas.

“Downwinders is about to purchase at least two to three stationary PM monitors of the kind being donated to UTD by AEEON in Taiwan,” said Schermbeck. “We'd like to donate them to neighborhoods in West Dallas and Joppa, and plug them into the new network that's being built. We intend to buy a couple of hand-held PM monitors as well for portable use.”

Monitoring could reveal neighborhoods where PM is much more of a problem than it is elsewhere and lead to changes to bring those levels down, according to Lary.

Monitoring could reveal neighborhoods where PM is much more of a problem than it is elsewhere and lead to changes to bring those levels down, according to Lary.

“That might produce a cascade of better health outcomes for that neighborhood,” Lary said.

“Monitoring could lead to better protection from traffic pollution for public transit riders, employee and neighbors. It could help mitigate expected increase in PM pollution from new projects before they began; i.e., a new freeway or warehouse district. Traffic lights can be timed to minimize the amount of idling and pollution.”

A regional PM monitoring system is also useful for tracking emissions incidents or air catastrophic events such as the ones DFW has seen over the last four months, he said.

"On October 19, a huge air pollution episode sent PM levels into the triple digits and raised the regional ozone average. It caught the current system off-guard because there were so few PM monitors in the region.”

The incident to which Lary refers was reported in Denton, Arlington and Dallas as a thick haze with noxious odors of burning tires or chemicals. The Texas Commission on Environmental Quality has declined to investigate it.

For more information on the "No Safe Level Campaign," follow Downwinders at Risk on Facebook or email downwindersatrisk@gmail.com.