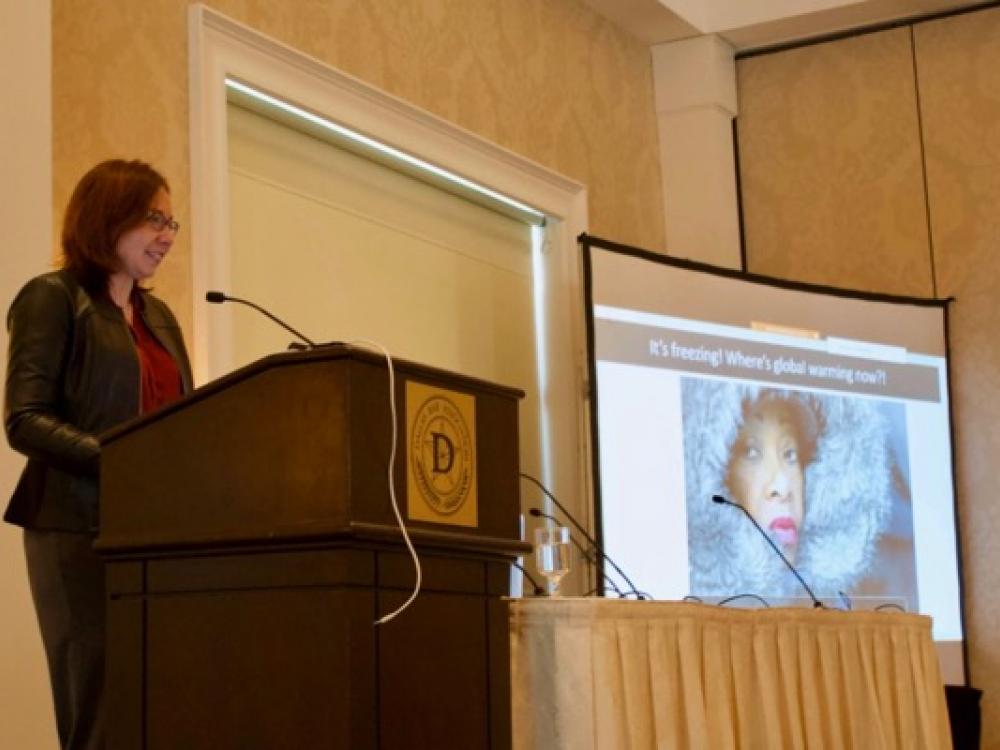 Katherine Hayhoe presented her compelling case for climate action at the North Texas Climate Change Symposium on Feb. 4. Courtesy of City of Dallas.

She followed with an engaging strategy to connect people with the issue, which many view as a far away problem that won’t affect them, despite science to the contrary.

Named one of Time magazine’s “100 Most Influential People” in 2014, Hayhoe sees it as her mission to help people connect the dots between climate change and their own lives.

The most important thing you can do to fight climate change: talk about it | Katharine Hayhoe

The event, sponsored by the City of Dallas’ Office Environmental Quality & Sustainability, heralded the city’s new contract to develop a climate action plan to reduce greenhouse gas emissions citywide. The 200-plus tickets were taken a month in advance.

“We think that climate change doesn’t affect us and there aren’t any palatable solutions,” said Hayhoe, sharing the conclusion of a recent Yale University study.

A U.S. map, orange-hued to show the public’s acceptance of climate science, revealed a majority nationwide. Even in DFW, 60 to 65 percent believe it is real. However respondents' answers to the question of whether climate change will affect them personally, yielded a blue map, depicting the majority who responded “no.”

She blamed the public’s disconnect in part on the iconic images that the climate change movement has adopted - namely the polar bear on melting ice, which many find unrelatable.

However, the science shows we are already feeling the heat of climate change right here in the U.S., she said.

Why should climate change matter to us?

“Floods, hurricanes, drought,” Hayhoe listed. “Texas is the number-one state for billion-dollar weather and climate disasters since 1980. There have been 105 here. In the entire U.S. there were 256.”

According to Hayhoe, 37 trillion dollars in U.S. infrastructure is at risk to climate damage.

“Our whole society is built on climate,” she pointed out. “Climate is the average weather over 20 to 30 years. That’s the basis for our decisions: building codes, zoning.”

Hayhoe stressed we must accept climate change as fact as we plan for the future.

"Planning for the future based on the past is like driving down a straight road looking in the rearview mirror. We’ve been building our own society based on the past. But now we are already on the curve in the road.”

“Planning for the future based on the past is like driving down a straight road looking in the rearview mirror. We’ve been building our own society based on the past. But now we are already on the curve in the road.”

She noted that many churches, universities and corporations are working to reduce their carbon footprint. Effort such as these could help reverse Texas’ ranking, now number one nationwide in carbon emissions.

As for adaptation, conservation measures reduce climate change’s impacts. Restoring wetlands to cushion communities against intensifying hurricanes is an example. Another is reducing urban heat by planting trees, part of the plan for Dallas, the nation’s third-fastest-warming city.

“If we fail to reduce and adapt, we’ve chosen suffering,” Hayhoe said. “The most vulnerable populations of the world already experience poverty, hunger and death from unsafe water. Climate change exacerbates all of these.”

She posed three steps to address the threat.

“First, what concerns do you already have? Floods? Social justice and economic inequity? Heat? Air quality? “

“How do those connect to climate change?”

Climate-related events such as intensifying hurricanes and storms, heavier rainfall, more-frequent droughts and heatwaves all feed the human experiences we want to avoid.

Hayhoe has experience consulting with city officials on their concerns, and finding the climate connection.

“Chicago transit officials were concerned about heatwaves. They knew that the train track rails were warping at 92 degrees. ‘What will happen at 94 degrees?’ they wanted to know.” This led them to explore climate trends, to plan for future resilience.

By reviewing climate projections, cities can plan to avoid that corkscrew turn in the road that would derail their plans for public wellbeing and sound economies.

Texas is uniquely endowed to overcome its serious climate risks, Hayhoe pointed out.

“There is enough wind and solar energy in Texas to power the entire United States. There are 30,000 employees in renewable energy now.”

“We are energy leaders, with lots of energy industry knowledge. Understanding energy infrastructure and systems is a huge asset in developing renewable energy.”

“The most important thing we can do about climate change is talk about it," she concluded.

“The most important thing we can do about climate change is talk about it."

Recalling the blue map that revealed how few Americans believe that climate change affects them locally, she said, “There’s an even bluer map. That map illustrated the tiny percentage of respondents who said that they talk about climate change or hear others talk about it.”

“Climate change affects everything else we care about…If we can connect with people about their concerns and show how climate change is related, we can build resilience in a changing world.”