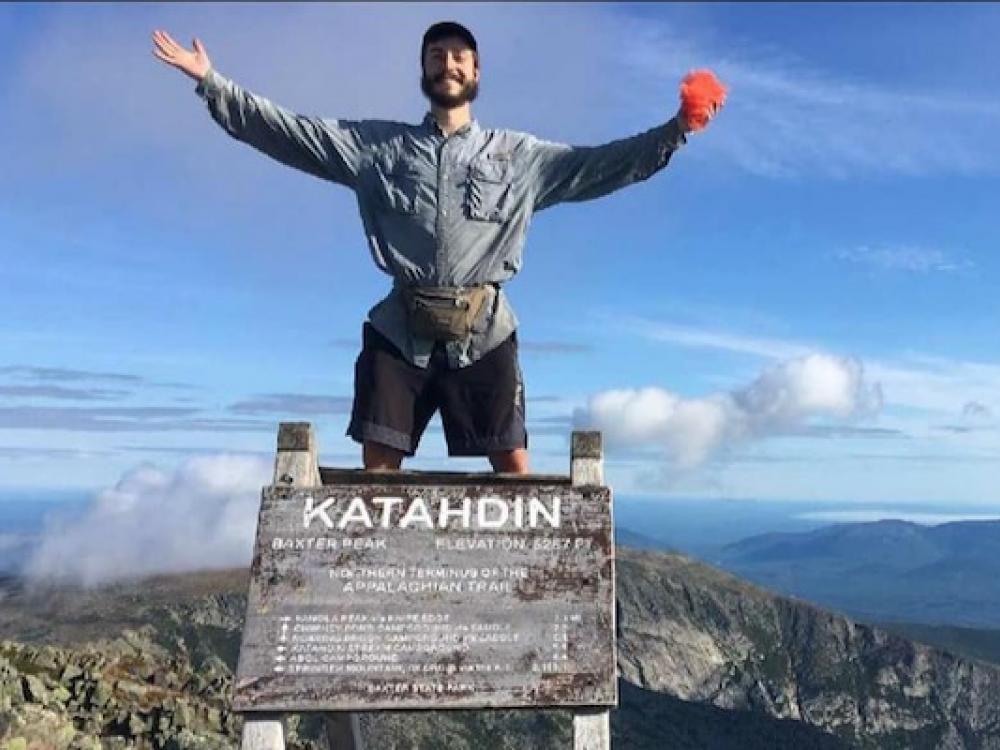 Graham Feil of Arlington at the finish of the northern leg of the Appalachian Trail, holding a red bath scrubber, which earned him his trail nickname "Loofah." Photos courtesy of Graham Feil.

After the pandemic started back in March, many people took to bike trails and state parks to escape home quarantine. But one North Texan took outdoor recreation to the extreme.

While many folks were tending backyard gardens, binge watching TV shows and consumed by the presidential election, 24-year-old Graham Feil of Arlington completed a 6-month walk on the Appalachian National Scenic Trail a week before Thankgiving. 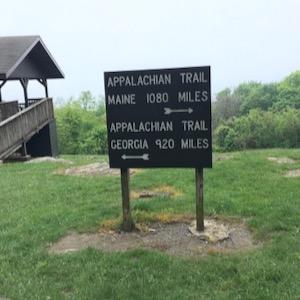 The Appalachian Trail crosses through 14 states, from Georgia to Maine.

At 2,190 miles, the Appalachian Trail is the longest hiking-only footpath in the world, spanning 14 states from Georgia to Maine.

World-famous hiking trails have garnered attention in recent years with popular films such as A Walk in the Woods, Wild and the Way, which are set on the Appalachian Trail, the Pacific Crest Trail and the Camino de Santiago in Europe, respectively.

Feil, who graduated from the University of Texas at Arlington with a civil engineering degree in 2019, said it had been a goal of his since his days at Arlington High School.

“I started seriously planning to hike in college around 2016,” said the former Eagle Scout and son of Arlington environmental activist Kim Feil.

In March, he was just a few weeks from launching his trek when the coronavirus crisis hit the United States. The Appalachian Trail Conservancy urged hikers to postpone their trips. He reluctantly canceled plans.

“I was pretty bummed about it,” he said.

However by May, it appeared things were opening back up. People were flooding parks and he saw posts from hikers on the trail.

“I was online everyday trying to see how people were doing that did stay on trail.”

He decided to go for it. 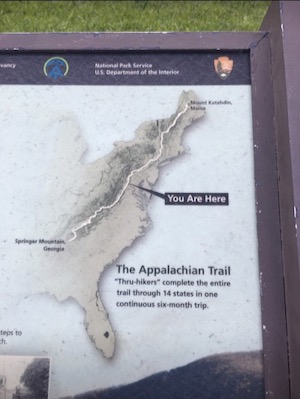 Having missed his April start date in Georgia, he headed up to the midpoint of the trail at Harpers Ferry, West Virginia. He aimed to complete the northern half of the trail first to avoid arriving in Maine in cold weather. If he was still up for it, he would return to Harpers Ferry by bus and head south for the second half.

Feil headed out on the trail alone, for ease of travel and also as a confidence-building exercise.

His solitariness, allowed him to keep his own pace - about 12 miles a day. And as a self-described lifelong stutterer, it forced him to break out of his comfort zone and meet new people.

But hiking during the pandemic would prove to have additional challenges. The Appalachian Trail Conservancy encouraged hikers to avoid using shelters and privies and instead use their own tents and stick to digging “catholes,” the do-it-yourself compost facility.

Luckily, Feil soon learned that social distancing on the trail was not usually difficult.

“You’re not actually hiking during the day with other people. You could be a good 30 minutes to an hour ahead or behind other people.”

Typically, he would run into other hikers when he stopped near a shelter to camp. There, they would swap stories at the campsite. Or sometimes, they would head into the nearest town together on foot, by shuttle or in the backs of friendly strangers' pick-up trucks. In town, they would refresh supplies or recoup at a hostel, wearing masks when they went into populated areas and businesses. 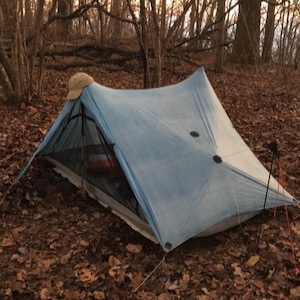 Graham Feil culled his backpack to the bare necessities. Photo by Graham Feil

So how do you pack for a 6-month hike?

“Like most people who start the Appalachian Trail, I took too much stuff,” admitted Feil, who earned the trail name "Loofah" for bringing along a red bath scrubber.

He soon learned to lighten his load and stick with the bare necessities: tent, sleeping bag, hiking clothes, sleeping clothes, stove, toilet paper. He went into town for supplies every 4 or 5 days. 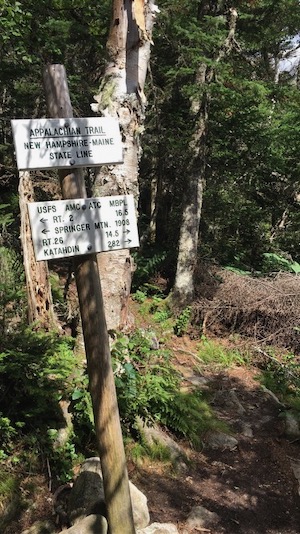 The trail was clearly marked. Photo by Graham Feil

He forgo bringing a compass.

“I really didn’t need it at all. The whole trail is so well marked.”

He brought along a paperback trail guide and often used an app version on his smart phone, which had up-to-date information about trail conditions and nearby resources.

As for food, he survived on packaged foods and canned goods like ramen noodles, sardines and tuna.

“I ate a lot of junk food to be honest,” Feil said.

On an average day, he packed out two liters of water after filtering it with his water filter.

Feil said he met people from all walks of life on the trail, ranging in age from 20 to 60-somethings - from doctors and lawyers to recovering drug addicts. He even hiked for a couple of weeks with a mother-daughter duo who later appeared on the Drew Barrymore Show in September talking about their 2020 trip.

The ratio of men to women was about 60/40, by his reckoning.

Some hikers were going for the long haul. Others were out for short treks. He met several people who had walked the trail before, including Appalachian Trail record-holder Warren Doyle, who’s hiked the trail 18 times over the years. 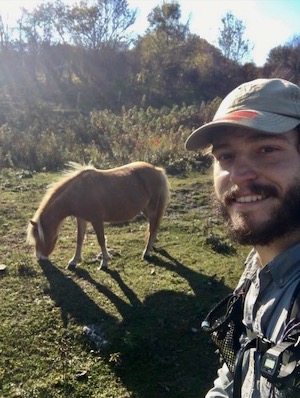 One of the wild ponies in Grayson Highlands in Virginia, who live next to trail. Photo by Graham Feil.

He saw a lot deer, some that seemed to waiting on the trail for snacks. He also encounteed “tons of bugs,” including many varieties of spiders. He got stung by a wasp for the first time.

His close calls included nearly stepping on a rattlesnake, startling a napping moose and walking up to a mother bear and her four cubs, climbing a tree about 50 yards away.

“I shouted to make my presence known,” said Feil, who loved seeing the critters but didn’t want to take any chances. “They heard me and scrambled down the tree.” 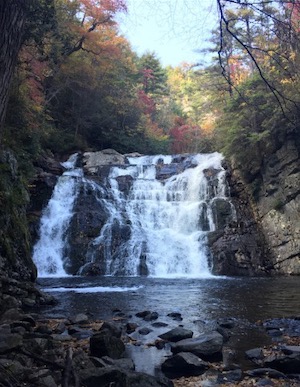 Feil drew on his Boy Scout experience but admits he didn’t physically train for the hike.

“I knew that being out there for so long, I would hike myself in shape. Most of my training was mental,” he said, referring to the online research he did.

His research paid off considering how much time he spent alone on the trail - especially during the Southern half, which he attributed to being out of sync with other hikers due to his late start.

Physically, Feil said the hardest part of the trip was in New Hampshire and Maine, with its deep climbs and descents. 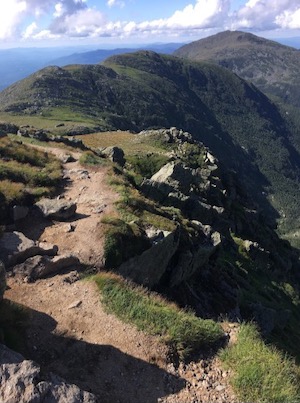 The north side of Mount Washington in New Hampshire. Photo by Graham Feil.

Would Feil do it again?

Yes! Although he missed his family and friends, including his two cats Annie and Elsie, he would like to do the hike again or try one of the two other epic U.S. trails - the Pacific Crest Trail or the Continental Divide Trail.

Since the experience, he’s even more convinced of the importance of local parks and other green spaces in urban areas.

“We’re so used to life indoors in a man-made easy setting where we have all of necessities at hand,” said Feil.

“I really feel that spending prolonged periods of time in nature is truely the baseline fundamental setting that all humans naturally should experience.

"It just felt so right to be out where we started as a species.”