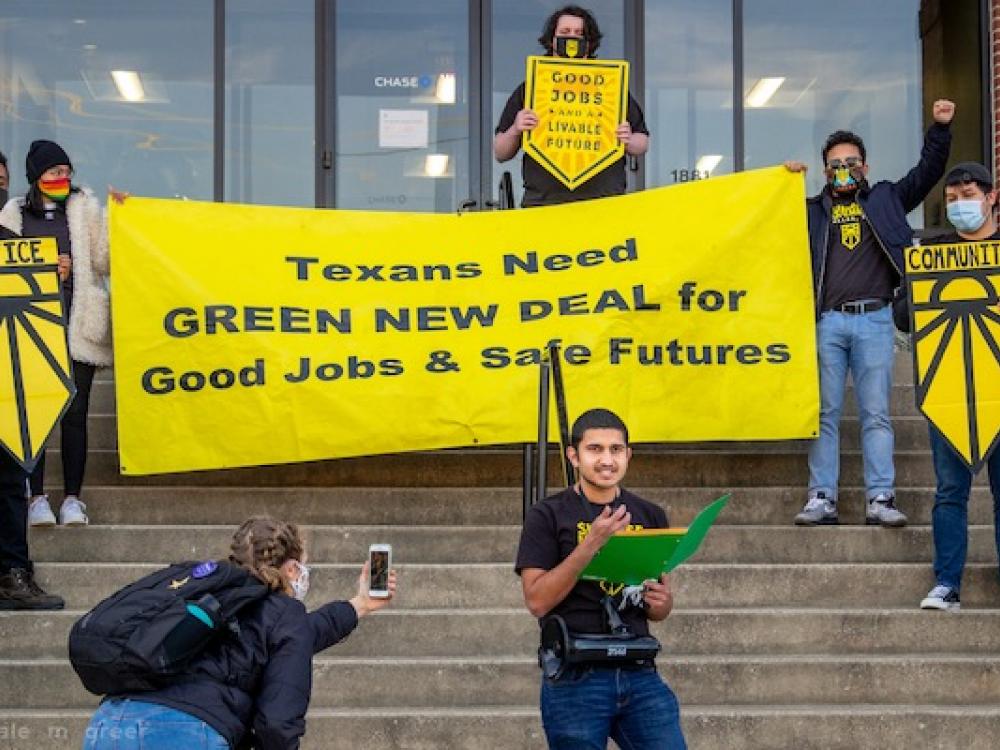 A Dallas youth coaltion fighting climate change wants a local U.S. House member to get on board with the Green New Deal.

On Monday, the Dallas chapter of the Sunrise Movement, held a rally at U.S. Representative Marc Veasey’s Dallas office to protest a letter he sent to President Joe Biden.

In the letter, Veasey (D-Fort Worth) along with three other Texas Democrats, objected to President Biden’s Inaugeration Day executive order halting new oil and gas leases on federal public lands and waters “to the extent possible,” according to the Texas Tribune.

Veasey, along with Democratic Reps. Vicente Gonzalez of McAllen, Henry Cuellar of Laredo and Lizzie Pannill Fletcher of Houston, called Biden’s order “far-reaching” and demanded he rescind it. They argued that banning “responsible energy leasing” would eliminate jobs, decrease the country’s gross domestic product, increase crude imports from foreign countries and chip away at federal revenue, among other concerns, the Texas Tribune reported.

The Sunrise Movement Dallas group says drilling on federal lands would perpetuate the issues that led to these crises in the first place.

“If Marc Veasey is serious about creating well-paying, union jobs and addressing climate change, income inequality, and racial justice, he will support a Green New Deal for Texans,” said Kidus Girma of the Sunrise Movement Dallas.

Sunrise organizers Aaryaman Singhal and Priscilla Yeverino spoke at the Dallas rally in front of a banner which read “Texans need a green new deal for good jobs and safe futures.” They called on Representative Veasey to look forward and confront the historic crises our nation faces: Covid-19, a faltering economy, climate change and systemic racism.

The letter states that there is “much work to do retrofitting our homes and buildings, creating cleaner and more accessible transit systems, expanding renewable energy across the state, preserving ecosystems, doing low-carbon care work as teachers, artists, and nurses, and more.”

It also discussed the burden of air pollution in Dallas, including how this pollution affects attendance at school and Covid-19 deaths.

According to Open Secrets, Marc Veasey is one of the top 20 recipients of oil and gas money (Democrat or Republican) in the U.S. House along with Gonzalez, Cuellar and Fletcher.

“[Veasey] must stand up for the health and well-being of people, not the profits of fossil fuel executives,” the Sunrise Movement said in a press release.

Sunrise Movement Dallas says it promises to keep pressure on lawmakers to pass a large green stimulus bill, which can begin to address systemic racism and income inequality while providing a just transition for fossil fuel workers.