The winter solstice this year falls on a day that’s been billed by metaphysicians as a kind of cosmic cliff -- the end of the Mayan calendar. But for a local theatrical troupe, the day also marks the end of a 20-year tradition when the WinterSolstiCelebration hosts its final gathering on Dec. 21 in Dallas.

Amy Martin, founder of the alternative online publication Moonlady News, has produced and directed the show almost since the beginning. She said the Mayan calendar has nothing to do with why she’s calling it quits. It’s just time to move on.

“Twenty years is a good long run,” said the 56-year-old writer and director. “I’m just getting a little old for it. It grew bigger than I wanted it to be.”

Martin joined in the first winter solstice celebration held at White Rock Lake in 1993. A group of 75 people, mostly friends, gathered for the outdoor festival, which included poetry readings, music and storytelling. Martin said the event held special meaning because she was going through a tough time and was estranged from her family.

She found solace in the communal celebration marking the longest night of the year and helped organize the event the second year. By that time, it had already become known for its avant-garde performances.

“I remember my clothes caught fire and people thought it was part of my act,” she joked.

When organizers lost their venue the third year, her co-director wanted to quit, but Martin kept it going and eventually found a new home at the First Unitarian Church of Dallas.

The event grew until the fire department cracked down on them for filling the building to over capacity.

“I don’t think they were too happy about the burning of the yule log either,” said Martin.

In 2000, they found a partner in the Cathedral of Hope where they’ve held the event every year since.

The celebration, which has grown to include 60 performers and a $10,000 budget, is part theater, part ritual. Each year, the show is built around a theme, which has included such heady topics as joy, worthiness, Earth and the Beatles. This year, the theme is transformation. Martin expects 1,000 people to attend. 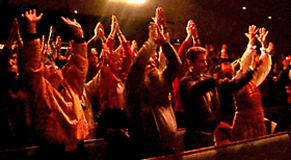 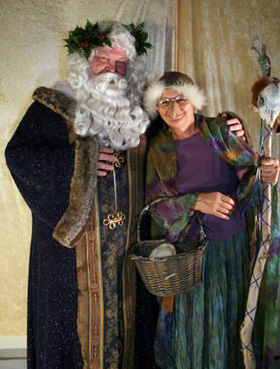 Martin said the winter festival dates back to ancient times when communities were more closely aligned with the natural world. Today, the holiday is experiencing a resurgence among those who seek spirituality in nature and a mix of world traditions.

As for the Mayan calendar date, Martin doesn’t believe that evolution happens in big shifts, however all the focus on this year’s solstice can’t help but give humanity a push. She said people need to be reminded that we’re all part of something bigger: humanity’s storied evolution. Something to celebrate, she says.

“[Humanity's] done a boffo job,” said Martin. “The media throws up our negativity but we’ve really come a long way.”

As for future celebrations, so far no one’s stepped up to take Martin’s place. She said Friday night’s performance will be emotional but she’s looking forward to new endeavors.

“I’m tired. I’m yearning to go back to writing, to go back to my theater roots,” she said. “These big events are a young person’s game.”