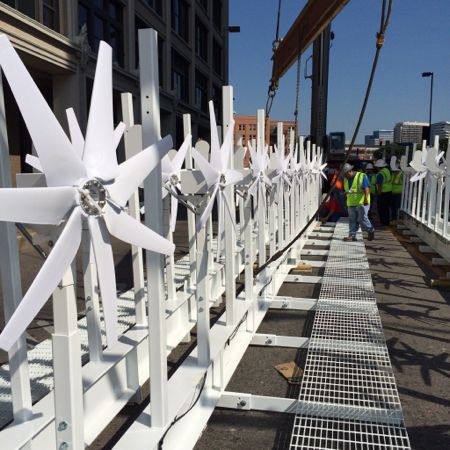 According to David Browning, vice president for business affairs, El Centro College purchased the wind turbines, all made in the United States, at a total cost of $240,000, which includes the infrastructure – a metal grid to support the equipment – and the turbines themselves.

“These turbines have a life expectancy of 25 to 30 years, and they will generate enough power to run approximately 2,000 computers that we have in our labs on the main campus,” says Browning.  “We should recover the cost of the turbines in about 15 to 20 years – approximately $15,000 to $20,000 annually.”

Browning said the wind farm is somewhat experimental for the wind industry and hopefully something from which not only Dallas, but other cities can learn.

On the day the turbines were installed, students and employees saw a live feed on televisions in the El Centro College Student Center. A link that the public can view was also placed on El Centro’s website.

“Providing the link is a lot safer than having people go up on the roof to watch,” says Browning. 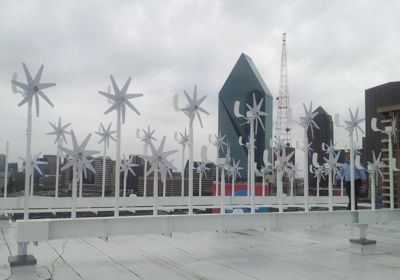 Browning said the getting the wind farm up and running has been a six-year process. During that time several different models were tested. Amarillo-based Hydro-Star Energy assembled the JLM Energy turbines, which were manufactured in California.

Now that it's installed, the wind farm will quickly be incorporated into the classrom. Environmental science classes will work it into curriculum, with the potential that students can learn how to prepare, install and maintain the turbines.

Meanwhile, El Centro aims to become a model of sustainability. In addition to installing the wind turbines, the college is replacing 2,000 desktop computers with thin client virtual desktops, which require about eight percent of the energy of an average desktop computer, says Browning. They will save about $120,000 a year in reduced energy costs.

“I’m hopeful that the wind turbines and other things that we are doing will make an impact on students environmentally, challenging them on how to improve their lives and the lives of their children and grandchildren,” says Browning.  “It has caused everyone to think that if the wind farm has happened, what else is possible.”

Watch the live feed from the rooftop.