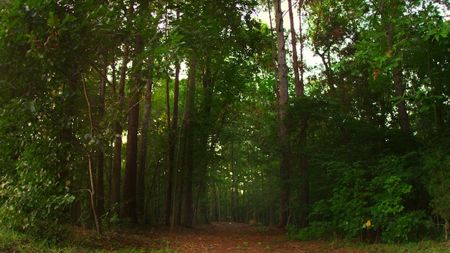 Pine Forest Memorial Gardens in Wake Forest, North Carolina is featured in "A Will for the Woods." The 2014 documentary about green burial is showing Nov. 6 at 7p.m. at the Perot Museum in Dallas. Photo courtesy of the filmmakers. 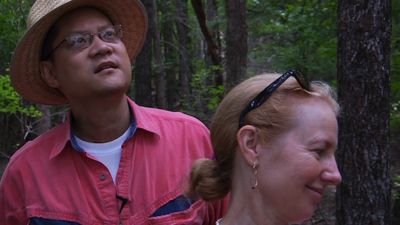 “What if our last act could be a gift to the planet?” asks the new documentary A Will for the Woods. A diagnosis of lymphoma caused psychiatrist and folk dance enthusiast Clark Wang to ponder how his body would be taken care of after death. Others joined Wang on his search and together they saved a North Carolina woods from being clearcut by turning it into a green cemetery. Dancing on the graves is most assured.

Above, Clark Wang and his partner Jane Ezzard prepare for his green burial in "A Will for the Woods." Courtesy of the filmmakers. 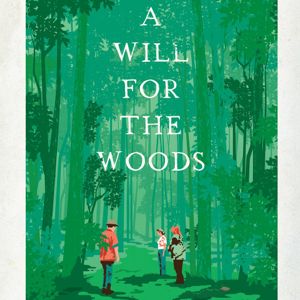 In green burial, the woods or meadow for a cemetery is kept in a natural state. Bodies are interred without embalming fluids and rapidly decay naturally to become part of the soil that nourishes plants which in turn sustains animals. Biodegradable body receptacles range from wood or cardboard caskets to simple shrouds. Memorial monuments are kept unobtrusive and sometimes gravesites are unmarked. It’s a stark contrast to the industrialized American way of death: embalming with toxic chemicals, internment in fiberglass coffins and concrete casket vaults in cemeteries that are fastidiously mowed and maintained.

A Will for the Woods has a free screening on Thursday, Nov. 6, at the Perot Museum of Nature and Science. It’s part of their very popular First Thursday Late Night activities for adults. The event is free with admission to the museum, but advance tickets are suggested since it often sells out. The theater has limited seating, so be sure to also register for screening. Both tickets are available here. 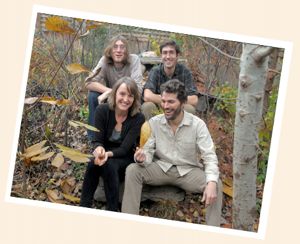 The filmmakers will be in attendance for a Q&A and community discussion about green burial. Also on the agenda is a representative from Texas Parks & Wildlife to announce their new conservation burial and cremains scattering program.

In addition, the filmmakers will be giving a free workshop earlier that day at the museum on environmental documentaries. It’s limited to 30 people, so reserve here.

A Will for the Woods filmmakers Amy Browne, Brian Wilson, Tony Hale and Jeremy Kaplan will be hosting a workshop on environmental filmmaking on Nov. 6, 3-5 p.m. at the museum. 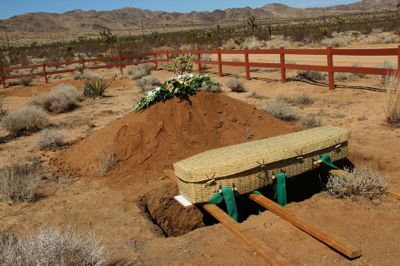 “Conservation of natural resources and energy, reduction of carbon emissions, and preservation and restoration of habitat.” But more than that, says Sehee,“People don’t want to talk or think about death. Green burial is not widely understood because people must explore a subject area they’d rather not. Yet green burial provides a context for people to explore it. Taking care of the dead in a way that heals us and the environment is an exciting idea that will feature big in the future.”

Green burial at its most beautiful and poetic embodies the first law of thermodynamics: Energy can not be created or destroyed; it only changes forms. The energy that is our self embodies out of the fertile darkness of our mother’s womb and returns to the fertile darkness of the soil. It is a philosophy to do death as consciously as life was lived, turning burials into a celebration of change.

There is no denial of death, no pretense of eternal embodied life, in this green way of death. Only submission to the cycle of life and gratitude for the planet. When the body no longer pulses with breath, it is not artificially preserved, but allowed to merge gracefully with the Earth that once nourished it with every bite of food, drop of water and breath of air. 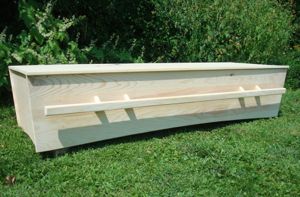 Green burial can be as simple as a non-embalmed body in a simple wood coffin interred in a conventional cemetery and handled by a funeral home. Or the body might be laid to rest in a green cemetery, either by a funeral home or the hands-on home funeral method. The closest green cemeteries to Dallas-Fort Worth are Eloise Woods Cemetery in Cedar Creek east of Austin, Our Lady of the Rosary Cemetery & Prayer Gardens in Georgetown, Countryside Memorial Park near San Antonio, and Ethician Family Cemetery in East Texas near Huntsville. 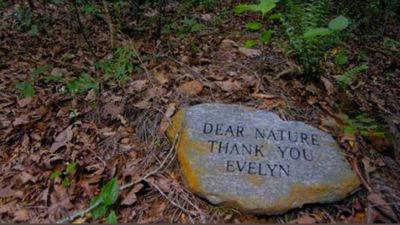 A new movement called conservation burial creates green cemeteries that are open to the public. Texas Parks & Wildlife is pioneering the program by identifying plots of land adjacent to state parks and preserves that threaten the open spaces by being liable to development. Sehee has identified several tracts next to the new Palo Pinto State Park west of Fort Worth opening next year.

Above, courtesy of the Green Burial Council.

In the proposed program, individuals and families would purchase plots and inter their loved ones there. Once burials were completed for that plot, it would be integrated into the park.

“Conservation burial, as the Green Burial Council has defined it, “ says Sehee, “requires the involvement of an independent steward like a land trust, which oversees a conservation easement and performs ongoing monitoring and reporting. Because despite what many think, conservation, restoration and stewardship of land do take money.”

While the scattering of cremains is legal in Texas state parks and preserves, and many city and county ones, Texas Parks & Wildlife is identifying areas where the practice would be encouraged and publicized. Details, such as if memorials are to be included, are still being worked out for both programs. 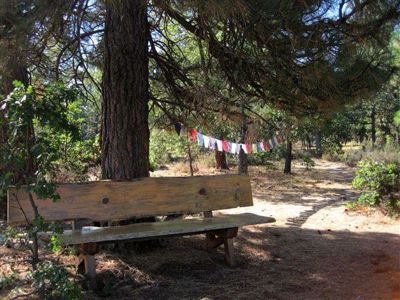 Because of the lack of green cemeteries in the northern half of the state, chances are that readers of this article will choose cremation. The cremation rate in the U.S. is approaching 40 percent, with the lows of 10 to 25 percent in Texas and the south, and highs of 60 to 70 percent in the west. Around the world, Japan has the highest rate at 98 percent with the U.K., Sweden and Norway coming in at around 75 percent.

Above, courtesy of the Green Burial Council.

Wherever you live, the younger and more urban you are, the more likely you are to choose cremation. Cremation just sounds so right: “Ashes to ashes, dust to dust.” Our bodies are incinerated with Viking funeral flair and the ashes strewn in natural locales to sustain the earth. Not. 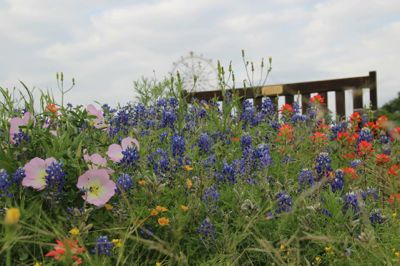 According to the EPA, the Valhalla fires of crematories, especially older ones, release significant amounts of dioxin, volatile organic compounds and heavy metals along with the usual combustion pollution of particulate matter and carbon monoxide and dioxide. Why? Most bodies are cremated in plastic caskets and contain mercury-laden amalgam fillings. Cremation per person requires the energy of 16 gallons of gasoline. All that makes cremation only 10 percent greener than commercial burial.

Above, Our Lady of of the Rosary Cemetery in Georgetown. Courtesy of the Green Burial Council.

And that ash? Cremains are a sterile mix of mostly calcium and phosphorous that do not naturally break down and become part of the living soil unless specially treated. At places like Big Sur that are popular for scattering, plants have incurred permanent damage from too much cremains.

“Some think cremation is not a part of the green burial movement,” says Sehee. “But it’s important to consider that many people need to because of their religion, family circumstances or budget. Green Burial Council studied the topic and found that it only takes about a $4 contribution to a carbon fund to offset the CO2 from a typical adult cremation.“

• Conservation Burial, a resource for creating private burial grounds as a means of protecting and expanding our state and national parks: conservationburial.com

• The Order of the Good Death: orderofthegooddeath.com