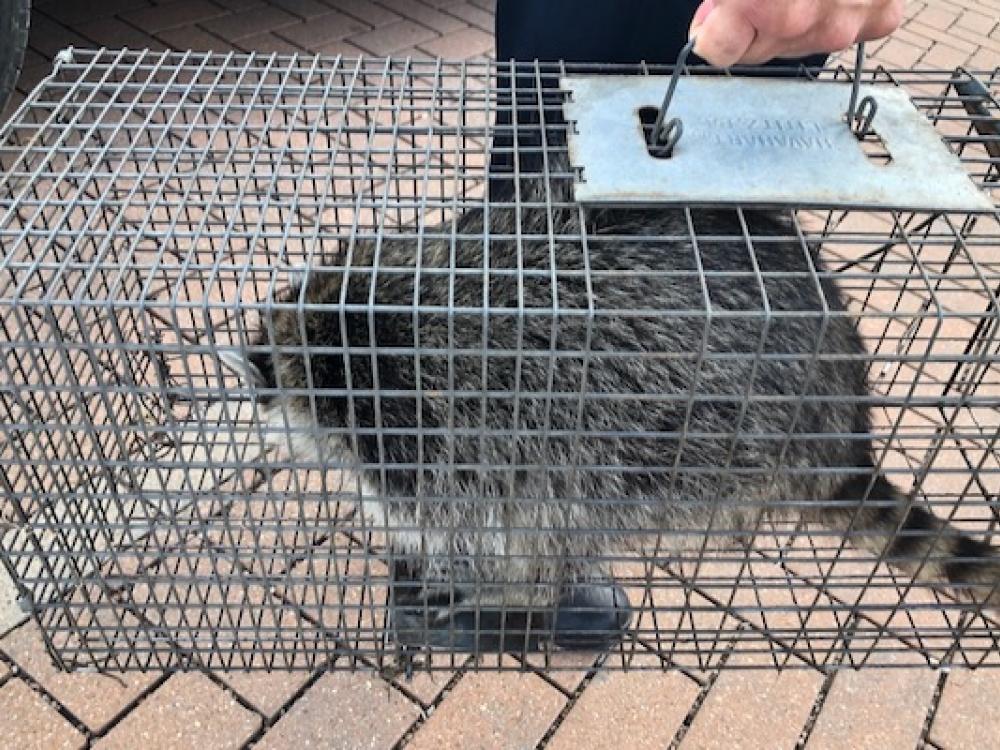 Relocated raccoons don't do well, say some wildlife experts, and a new raccoon will move into its place. Photo by Michael Smith

When I finished a walk at a local preserve recently, a police officer arrived and pulled out a wire trap with a raccoon inside. He explained that she might have babies back where she had been trapped. So he was releasing her pretty close to “home,” thinking she would return for the babies if she needed to.

He seemed like a well-intentioned guy doing what he thought was best for all concerned, even though a return to her kits would make the trapping pointless. And who knows what happened to those abandoned offspring.

He’s not the only one looking for green spaces to solve a wildlife problem, according to Bonnie Bradshaw, owner of 911 Wildlife. She said that there is a “massive problem” with homeowners and trappers releasing squirrels, opossums, raccoons and other animals into green spaces like White Rock Lake in Dallas.

Moving a neighborhood critter to a park sounds like a story with a happy ending. A raccoon struggles to “make a living” in a harsh human world and then is transported to a place with lots of trees and water, the sort of place any raccoon would want to live. But the real story is different.

The raccoon was making her rounds looking for food in the place where she grew up, a neighborhood with houses, back yards where bowls of dog food are often left out overnight, a little creek tributary nearby and maybe a little shed with a hole in the siding where she can slip in and make a den for her kits.

Then one night she entered a little wire “box” to get some food, and the gate fell down, trapping her inside. She spent the rest of the night frantically pushing and chewing at the wire walls, trying to get out.

In the morning, an enormous two-legged animal walked right up, but didn’t attack her as she expected. Instead, he picked the trap up off the ground and put it in the back of a pickup truck. The smells were overwhelming, all the different animals, including a dog. Surely she would be attacked any second, and she could not get away! After a bumpy ride, the two-legged thing got her again and she went swinging and flying down a path.

Then the trap opened and she raced away, full of fear, into the grasses and surrounding trees. She had no idea where she was. She had been through a frightening abduction and is now disoriented and confused.

When she runs into another raccoon, she may get bullied as the “new kid on the block.” She has to figure out how to get food without the unintended help of humans who leave their garbage bags out or the cat’s bowl full of kibble.

Wildlife experts like Bradshaw say that studies of relocated animals find that most of them die. Predators get them, they wander and get run over on the road, or are so stressed that they simply cannot make a living in a strange new world. That's part of the reason the U.S. Department of Agriculture and the Humane Society of the U.S both discourage what is sometimes referred to as "translocation," which means moving a critter out of its home range.

Some trapped animals, especially those likely to struggle for an extended time, may have “capture myopathy.” This is a condition in which muscles are damaged from an extreme degree of physical struggle or stress.

As explained in an article from the Pennsylvania Game Commission, animals are adapted for the brief muscle exertion and stress that accompany escaping from predators, but they are not adapted for extended struggles in a trap or restraint.

Capture myopathy can result in sudden death or may result in such things as loss of coordination, tremors and weakness. When they occur, such symptoms make an animal's survival less likely. After all, a relocated animal is having to fight off other animals and find food, water and shelter, tasks for which it will need all its strength and coordination.

Dave Pauli, the senior advisor for Wildlife Response and Policy with the Humane Society of the United States, says that capture myopathy is most likely with animals that have a high metabolism like rabbits. The stresses of capture – noise, bright lights, strange scents, big humans – are overwhelming and escape is impossible.

I wondered whether all of this is legal. For opossums, skunks and other fur-bearing animals, the Texas Parks & Wildlife Department says that trapping and relocation may occur “if the person has received authorization from the TPWD department and the owner of the property where the release will occur.” They further state that a monthly report must be submitted showing the “number and kind of fur-bearers captured, location of release site, name and address of person authorized to release.”

To avoid the potential spread of rabies, the Texas Department of State Health Services states that it is illegal for a person to transport animals such as fox, skunk, coyote or raccoon within Texas. However, there is an exemption for peace officers, licensed pest management personnel and other authorized persons, as long as the animal is released in the same county, within 10 miles of where it was captured. 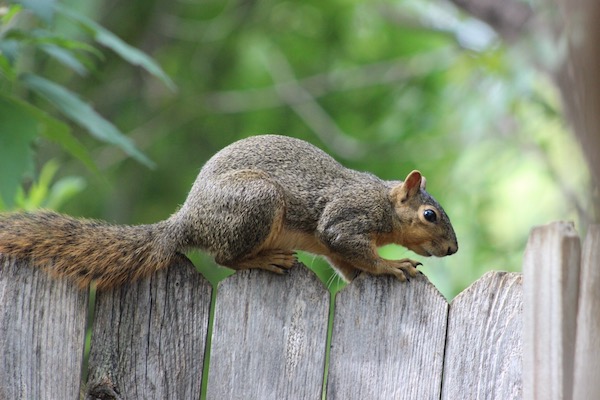 Animals are disoriented when moved away from their home range, which includes family and familiar sources of food, water and shelter. Photo by Michael Smith.

Further complicating the legal issues, the Texas Administrative Code does provide for trapping and relocating nuisance squirrels, if local ordinances prohibit simply hunting and killing them.

It sounds like trapping and relocating wildlife is legally complicated and does not usually end well for wildlife. But what about the original problem – the raccoon in your chimney or the opossum raiding the cat food on the porch?

Think of it this way: nature, or in this case your neighborhood, offers “jobs” occupied by animals. The job might be hunting crawfish (or finding full pet food bowls) and fighting off competitors. It can be a tough life, but it’s a living.

Like in the human world, there are only so many jobs available. When mama raccoon gets abducted and never heard from again, her job is now open and there are other raccoons eager to take her place and live on her turf. You didn’t get rid of a raccoon, you just traded her for a new raccoon.

The Fort Worth Nature Center and Refuge has worked with the city’s animal control staff so that they no longer release wildlife at the refuge, says Rob Denkhaus, Nature Center Manager. He is aware that people trap and release wildlife mostly with good intentions, but the emotional reasoning that “nature will protect” does not match the facts.

Released animals are “disoriented, have to contend with others of the same species and have to fight for everything,” Denkhaus noted.

What is the right thing to do? All the experts I spoke with agreed with Sam Kieschnick, urban wildlife biologist with TPWD: “An ounce of prevention is worth a pound of cure.”

Consider the reasons that an animal may be hanging out on your property and eliminate those reasons. Don’t leave pet food out overnight and don’t let seed from a bird feeder accumulate on the ground. Patch up openings into your house and if you have a chimney, make sure the chimney cap will keep wildlife out. Don’t have stacks of things that can offer shelter to an animal.

Then, if you do see an unwanted animal on your property, jump up and down and holler at it from a safe distance, spray it with a garden hose and give it an experience that teaches it that humans are scary and it’s best to stay away from anywhere that the humans live.

If you must evict an animal from a porch column or chimney, the Humane Society of the U.S. suggests unpleasant smells and sounds, such as apple cider vinegar, bright lights and radios, can be effective. Truly humane wildlife removal services such as 911 Wildlife, know how to humanely exclude animals from homes without relocating them, using one-way doors or releasing animals on-site after closing entry holes.

The idea is this: don’t relocate the animal from its territory and make room for a new one to move in. A smart animal that knows how to avoid you is better than a newcomer who will become a nuisance.

The Humane Society’s Dave Pauli told a story we can learn from.

There was an apple grower in the Pacific northwest who had a problem with coyotes chewing his irrigation lines for water. He had hired people to trap and remove the coyotes for several years, and now his orchards were overrun with voles (a species of small rodent). Now he wanted to bring in cats to eat the voles. Pauli’s suggestion: don’t bring the cats and stop trapping the coyotes – but this time, leave one irrigation line dripping into a bowl. That way, the coyotes did not have to chew the lines to get water, and they provided the farmer with all the rodent control he could want.

A happy ending for everyone!