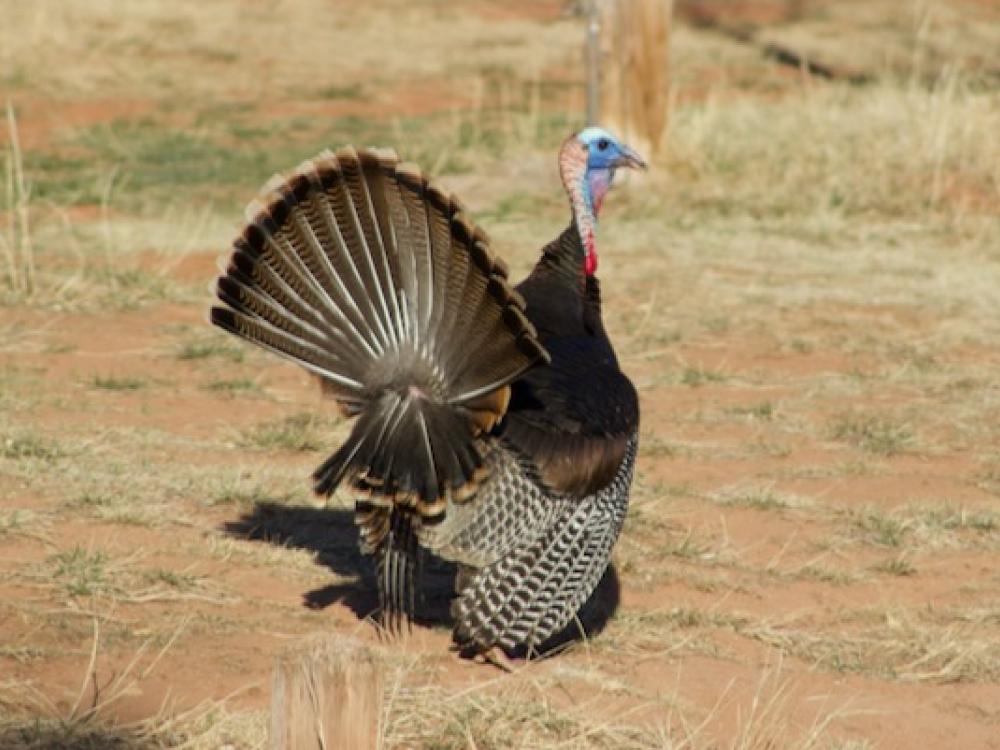 Whether your Thanksgiving plate was full of turkey or tofurky this year, this uniquely North American bird has long been part of our holiday traditions.

The free-range cousin to the domesticated turkey is the wild turkey, Meleagris gallopavo. And you can find them right here in North Texas.

The native Texas bird shows up in Dallas and Tarrant Counties in fields and open woodlands. According to the citizen-science app iNaturalist, many of the sightings cluster near lakes and preserves, which provide habitat and protection for these big birds. 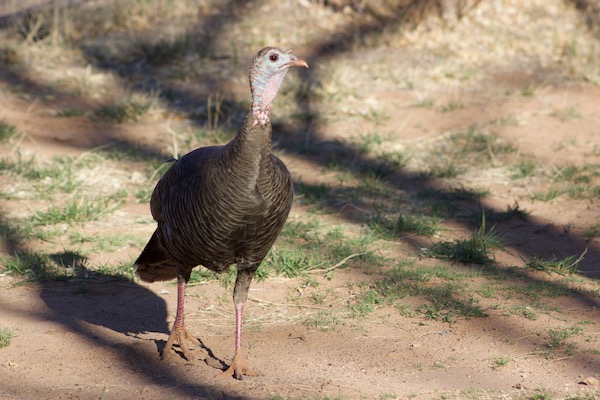 I’ve seen flocks of wild turkeys in several places in Texas, most memorably in Palo Duro Canyon. There, resting at a picnic table after a hike, I saw a flock wander through the area. One of the hens approached me cautiously. She appeared curious about the human perched on the picnic table, and she might have been expecting a handout. The turkeys in Palo Duro State Park have regular encounters with humans and are probably fed by visitors.

“It makes sense if they’re not pressured by hunting,” John Karges told me. “If they have not been shot at or seen a nearby turkey fall.”

Karges, a conservation biologist formerly with The Nature Conservancy in Texas, is reluctant to use a term like “trust” to describe the turkey that approached me. But if the birds do not associate us with danger, their natural curiosity might tempt them to approach us. Getting fed would seal the deal – the turkeys would turn the tables and expect us to feed them.

Following on the heels of this group of hens was a tom – a male – who was intent on impressing the ladies. He hurried to catch up with them and then puffed out all his feathers, looking twice his size. He fanned out his tail feathers, dropped his wings near the ground and shook them. Altogether it was a dramatic show, but the ladies did not seem impressed. They kept wandering ahead as the gentleman continued to press his case, seeming just a little too desperate. 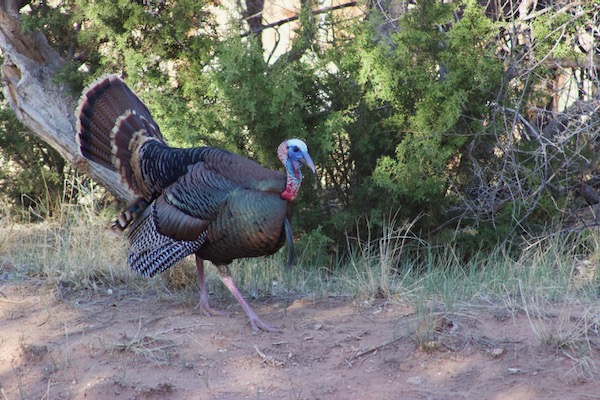 Turkeys do not have a strong reputation as critical thinkers. A Native American story told by the Caddo people about the coyote will show what I mean. The coyote comes upon a group of turkeys playing on a hillside. They each get inside a bag and have fun rolling down the hill. Coyote (usually a trickster in Native American stories) asks the turkeys to let him join them, and they give him a turn. Then he persuades all of them to get in the bag together so that he can roll them all down the hill. Once they are all in the bag, coyote ties the bag, slings it over his shoulder, and takes the captured birds home.

Despite the widespread belief in their stupidity, the wild turkey is at least a reasonably intelligent bird. It is able to remember where food was found, even after a long delay. Turkeys communicate with other members of the flock through various sounds, more than just the “gobble, gobble, gobble” they are known for. And, for the record, they will not look up into the sky with open mouths and drown in a rainstorm.

A flock of turkeys will forage in open woodlands and clearings, eating nuts, seeds, berries and insects. If you come upon a flock of these birds they may run away, but they can fly short distances and generally they roost in the low branches of trees at night. Nesting, on the other hand, involves scratching a clear patch on the ground. Hens lay an egg a day for a clutch of about 8 to 15 eggs.

The numbers of wild turkeys dropped to dangerous lows during the 19th and early 20th centuries because of hunting and loss of habitat. Even here in Texas some races of turkey were wiped out. Beginning in the 1940s, turkeys from the Rio Grande population were trapped and released in various parts of Texas, and others from the eastern U.S. were brought in to restore this bird in East Texas, according to John Tveten’s The Birds of Texas. Overall, populations of wild turkey have rebounded and even expanded their range within the U.S.

You might have heard that Benjamin Franklin proposed the turkey as our national bird. That story is a myth, though he did write to his daughter criticizing the choice of a bald eagle to represent our country and saying that the turkey was a “much more respectable bird.”

Next time you sit down to a holiday dinner, include a little gratitude for what is a truly respectable bird.

Ode to the Little Brown Bird