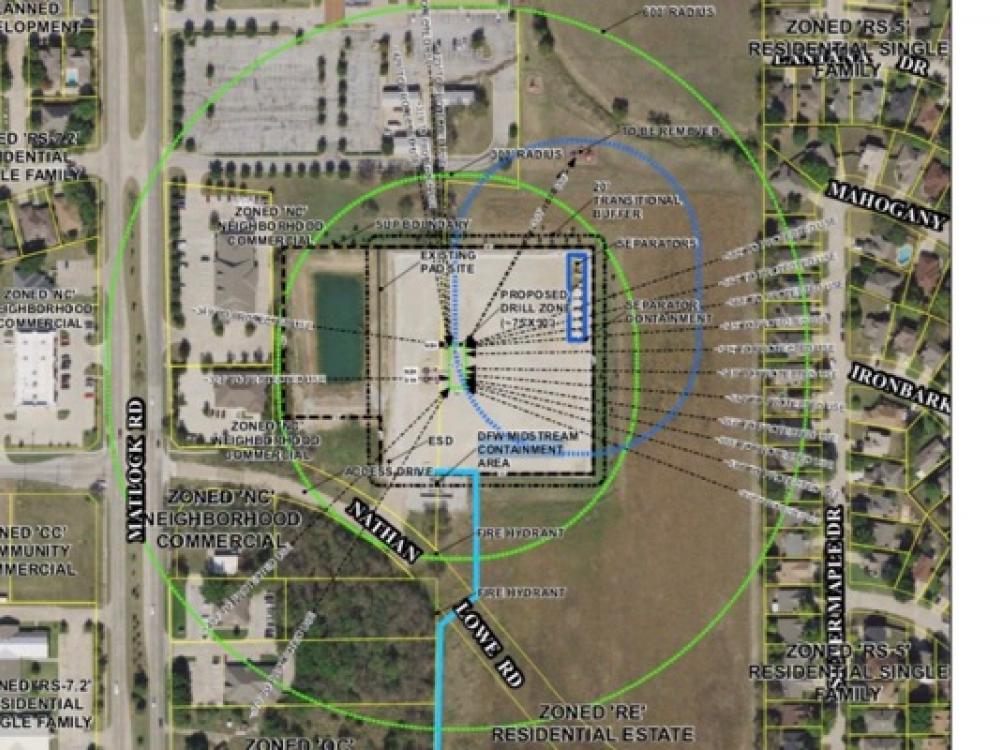 Total has requested to drill within 324 feet of homes and businesses in Arlington, waiving a 600-foot setback rule. A similiar request on the same site was denied in February. Courtesy of city of Arlington.

More than 30 protestors came out to an Arlington City Council public hearing on Tuesday to oppose a gas drilling setback waiver only to be told mid-meeting the vote was being delayed.

Last night, a public hearing was scheduled, however, when the SUP came up for discussion, Arlington Mayor Jeff Williams announced the vote would be postponed until May 22, saying they needed more time to gather information. All 8 city council members were present.

"I’m very surprised by the very late postponement of the vote in the middle of the city council meeting," said Ranjana Bhandari, leader of Liveable Arlington. "I don't understand why they need more information. The SUP is essentially the same as the one denied in February."

Total, a France-based gas drilling company, already has three wells on the Cornerstone drill site, a 4-plus-acre tract at 5427 Matlock Road in Arlington. In February, Total requested to build three additional wells on the site - within 319 feet of homes and businesses. After strong public opposition, organized by Liveable Arlington, the Arlington City Council denied the request in a 6-2 vote.

Last night, Total came back to the city with a nearly identical setback waiver request on the same site. This time, the drill zone was reduced in size, increasing the setback to 324 feet, a difference of a mere 5 feet. The drill zone was also shifted about 15 feet south, increasing the distance from a nearby church playground to 383 feet from 368. The city's Planning and Zoning Commission recommended to approve the updated variance in April. A vote was scheduled last night.

According to Jessica Youngblood, gas well coordinator for the city of Arlington, setback waivers are commonly requested in Arlington. There are 351 gas wells on 56 sites in Arlington. Since 2011, 13 of 16 sites that applied for gas drilling permits, received waivers to drill under the 600 foot setback rule.

At last night's hearing, Mayor Williams allowed the public to speak if they could not attend the next meeting, but added those who opted to speak would not be allowed to speak at the next hearing before the vote.

One person spoke in favor of the drilling waiver - William Dwight McKissic, pastor of Cornerstone Baptist Church, which owns the property where the Cornerstone drill site is located. He lavished praised on Total's request to drill more wells, calling it a blessing for the church.

Afterward, 11 people opposed to the wells spoke, including a family doctor, an oncology nurse, a pediatric nurse practitioner and a UTA professor and gas drilling researcher, who all cited studies that show gas drilling poses a risk to human health.

There were also six who registered but who didn't speak and 15 additional people who were sitting in opposition. Among the groups represented at the hearing included the Arlington Conservation Council and the Progressive Women of Arlington. Bhandari said she had also collected 447 letters against the waiver.

During the meeting, one councilman pointed out that gas wells had been on the property since 2009, reasoning that Total wasn't proposing anything new.

Later, Bhandari countered by saying precedence is not sufficient reason to continue the status quo.

"When my husband and I first came here 25 years ago, Arlington was a nice place to live and raise your children and now it's a mining town. When I drive around town, every two minutes, I see a drilling site."

She said when gas drilling came to Arlington 10 years ago, she thought it would be only one or two wells here and there, not hundreds. She pointed out since then, 1,400 studies have been published exposing the health risks of fracking.

"I think it's unconsciounable, what they are doing, and the mining is expanding," she said. "Just because we made a bad decision once doesn't mean we're committed to it forever.