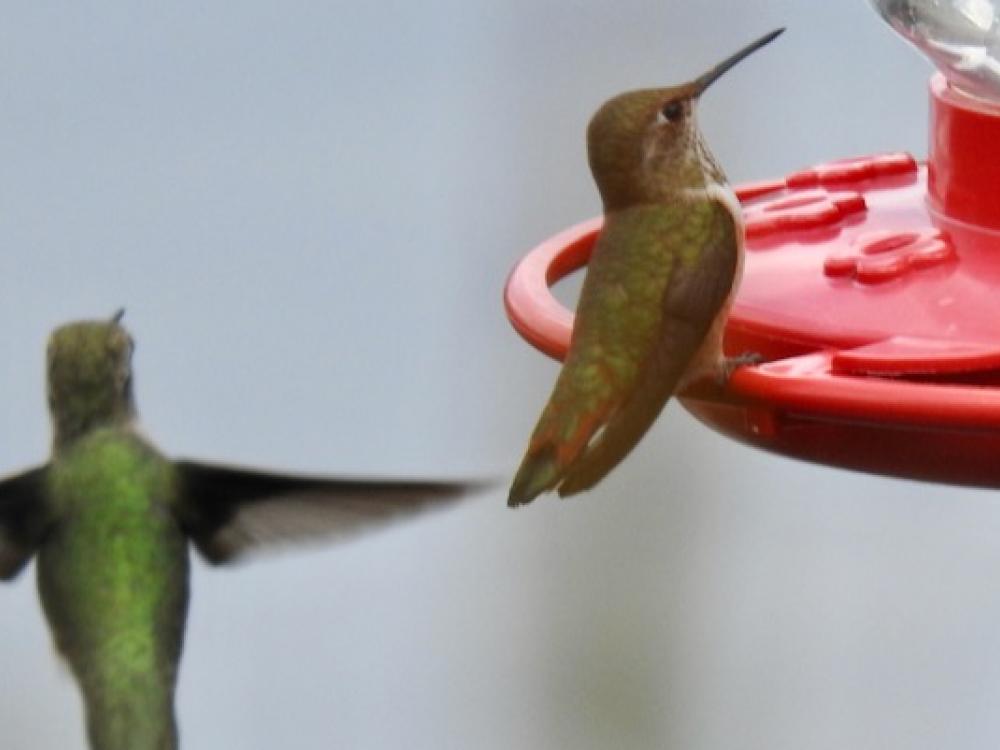 Rufous hummingbirds stop for a power drink at a feeder. Photo by Sam Kieschnick.

They’re the only birds that can fly backwards. They weigh less than a nickel. And they fly thousands of miles each year on their migration route. Learn what to do - and what not to do - to help hummingbirds in this episode of the Texas Green Report, a production of Green Source DFW and the Memnosyne Institute. Listen to this report by Marshall Hinsley or read the full transcript below.

MARSHALL HINSLEY: Every spring, hummingbirds arrive in Texas on their migration northward, and some set up camp in our backyards and spend the summer with us before migrating back south to wait out the winter.

If you set out a hummingbird feeder and are lucky enough to get a few to share your space, you’ll witness the amazing aerial maneuvers these little guys are capable of as they zip around in the air, stop on a dime and hover in place before speeding off in another direction.

You’ll also get to witness the daily drama of just who’s feeder is it anyway? as they dive bomb each other to defend what they’ve claimed as theirs.

And if you’re really lucky, you’ll spot a nesting hummer who’s chosen your yard to bring up the next generation.

To ornithologists like Cliff Shackelford, who’s with the Texas Parks and Wildlife Department, it’s impossible not to find them truly amazing.

CLIFF SHACKELFORD: “They’re fascinating. I think anyone that sees the hummingbird first is going to say, how is it hovering like that? How can it maneuver like that? When you do a little research and find out that their wings are beating up to 70 times per second - not minute - but per second. I mean, who's not fascinated by that?”

MARSHALL HINSLEY: Shackelford says Texas has around 20 species of hummingbirds, and the ones that you’re most likely to see are the ruby throated hummingbirds, which you can identify by the golden green plumage on their back. The males though have a brilliant red throat. 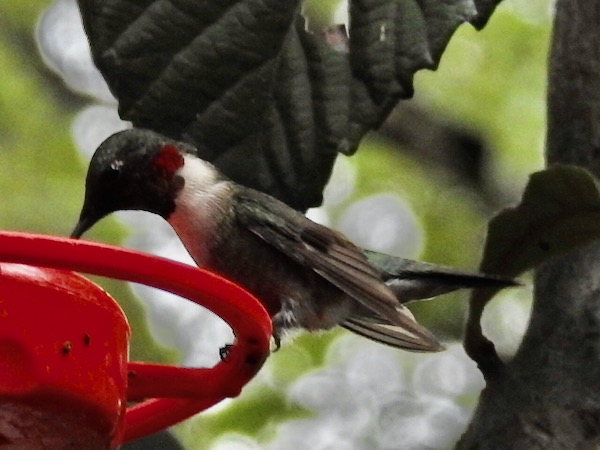 CLIFF SHACKELFORD: “We have almost 20 species of hummingbirds in Texas. The one that dominates much of Texas, especially the eastern two thirds or so, is the ruby throated hummingbird. So in the Dallas-Fort Worth Metroplex, for example, the species most people would be familiar with is the ruby throated hummingbird, which does not winter with us. They arrive in mid- to late-March and spend the next six or so months with us and then migrate south for the winter.”

MARSHALL HINSLEY: Shackelford says the migration of hummingbirds can span more than 2,000 miles, with some species like the rufous hummingbird in West Texas wintering in Southern Mexico and spending summers as far north as Alaska.

To make this trip, they depend on native flowers that have a sort of flow to their blooming schedule. As winter gives way to spring, that flow starts in the south and moves to the north. In the fall, that flow is reversed, starting in the north and moving toward Mexico by late fall. Hummingbirds follow this flow, sipping nectar from flower to flower along the whole migration path, much like the monarch butterfly does.

As you might imagine, such a long trip takes a lot of fuel, especially with wings that beat so fast you can’t see them. 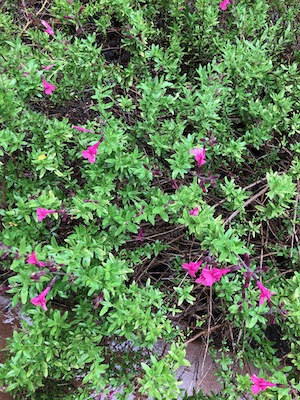 Salvia greggii is a good addition to a hummingbird garden. Photo by Julie Thibodeaux.

CLIFF SHACKELFORD: “They do it by drinking a lot of sugar nectar and having that high powered engine that they have that keeps them fueled. They also eat a lot of gnats. So if people think they just eat nectar about 10-12 percent of their diet especially when feeding young in the breeding season are gnats and other small insects. They need protein.”

MARSHALL HINSLEY: So, hummingbirds in your backyard are helping to keep insect populations in check - which is another good reason that you shouldn’t be using insecticides.

The schedule for when you can see hummingbirds in Texas is mid-March through November. And your chances for having a group set up camp near your abode is increased by having blooming native plants in your landscape.

CLIFF SHACKELFORD: “Ruby throats start arriving in East Texas around the middle of March and what's really great is that's when red buckeye are the first to pop out. And that's exactly what the ruby throats are hitting are those red buckeyes. And as they migrate farther north, those that are going up to say the Great Lakes, the winter's retreating and spring is coming and, and so the flowers are usually available to them as they keep pushing north. And so what we recommend if you're going to plant a wildscape for hummingbirds and other pollinators is to put a variety of plants that bloom at a variety of times. That way you always have something available. If you just stuck to one plant and had a certain window of time that it was available, then you're not really covering that whole season of when we have hummingbirds.

“So, back to the buckeye. That's one of the best ones for the early birds that are coming in March and then something like turk’s cap that blooms late. People get frustrated because they bloom late. They don't start till maybe late May or early June. Well guess what - they bloom later into the fall and even early winter until the first freeze. So, they provide that last bit of food. And then there's lots of other plants in between like sages, mist flower and coral honeysuckle and there's just a whole bunch of different plants that can provide for hummingbirds.” 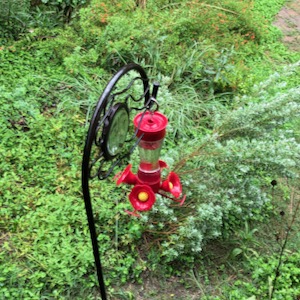 Use one part plain white sugar, four parts water and do not use dye in hummingbird feeders. Photo by Julie Thibodeaux.

MARSHALL HINSLEY: And of course, you can also set out a hummingbird feeder with sugar water that you mix yourself - no need to buy pricey nectar from the store with its forbidden red dye.

Shackelford says the formula is simply four parts water to one part sugar - nothing else - just plain, white table sugar - no artificial sweeteners, no stevia, no special funny colored sugar from the health food store, and for goodness sake, no red food coloring.

Another tip, Shackelford says only put out enough sugar water in a feeder that will last between cleanings, or else you run the risk of the sugar water spoiling, especially during the hottest summer months, and that can harm the little birds.

And as for cleaning, never let black mildew form on the feeder or any of its parts. In the summer, that may mean you need to clean the feeder and replace the sugar water each night. In the cooler months of spring and fall, you can get away with two or three cleanings each week.

CLIFF SHACKELFORD: “Certainly when you bring it in to refill it is always a good time to rinse it off. You don't even need to use soap if it's not showing a lot of mold or mildew build up. Some of the hummingbird feeders can be put through the dishwasher. So you'll notice when it needs to be scrubbed clean, don't use harsh chemicals.”

MARSHALL HINSLEY: Shackelford also says to skip the ornate and intricate feeders - they’re just going to be a headache to clean. Choose one that’s easily taken apart and allows you to reach all of the openings and crevices with a soft-bristled brush and pipe cleaner or straw cleaner.

You can set the feeder out early in March and maintain it all through the summer and into late November so you don’t leave a single late passerby stranded without a quick fuel stop. The real rush comes just as summer heat lets up and fall approaches.

CLIFF SHACKELFORD: “When September comes around we get the big push of northern breeding ruby throats that are passing through Texas as they go to the Tropics. You'll see a huge influx in September so people are often saying, what's going on in late September. It's southbound migration - these birds are stopping off just like we would on a long journey when we need to refuel. And so we see a lot more hummingbirds and you can go through a lot more nectar in September than you would any other month of the year.”

MARSHALL HINSLEY: And with a little patience, every yard can become a hummingbird haven. 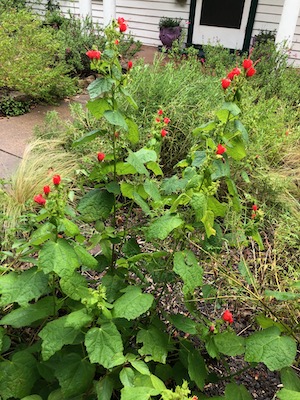 CLIFF SHACKELFORD: “They are some of the easiest to see. They're also some of the most frustrating because they take a quick sip and leave. You might see them in spring when they're migrating north and not through the summer and then here they come back in the fall. So some people get frustrated because they can't seem to host a hummingbird throughout the summer, but all over Texas, they're not many yards anywhere in Texas that don't have a breeding hummingbird.

“So, the feeder is one way to get them interested but the big way to really get them hooked is to not only have a feeder but have a wildscape. And wildscaping is planting native plants for wildlife. And so if you do a little homework and look for what the best plants are for providing for pollinators, you'll see an increase in hummingbird use, you'll get a lot more butterflies and it's a lot of fun to watch.”

“It doesn't mean just going to the big box store and getting color. Like bougainvillea is a beautiful plant that has very little to no nectar value. And if you don't believe me just go stand outside your bougainvillea and watch it - you won't see anything. Now 10 feet away if you planted some salvias, you would see dozens and dozens of bees, wasps, butterflies, flies, hummingbirds, it's just obvious where the nectar source is.” 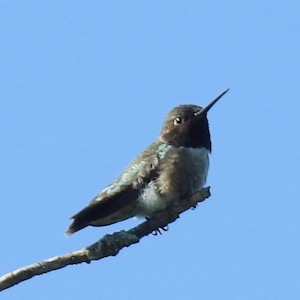 A black-chinned hummingbird spotted in Dallas. Photo by Sam Kieschnick.

MARSHALL HINSLEY: And lay off the lawn chemicals, says Shackelford. You can’t have a wildscape if you’re drenching it in toxic chemicals.

And about Cornell Lab of Ornithology’s findings that North American bird populations have seen a decline of three billion birds since the 1970s, Shackelford says that except for a few species, most hummingbird populations are holding steady.

CLIFF SHACKELFORD: “Some of the Rocky Mountain hummingbirds are in the last several years showing a decline but overall, hummingbirds in the U.S. are doing pretty well.”

MARSHALL HINSLEY: Which just goes to show how we can coexist with a species quite well just by giving it space and showing it a little kindness.

CLIFF SHACKELFORD: “I think hummingbirds are spectacular and people should love them, and they're out there. And the way to really grab hold of their attention is to plant a wildscape.”

MARSHALL HINSLEY: Shackelford has co-authored a book called Hummingbirds of Texas: with Their New Mexico and Arizona Ranges. He also hosts a live radio show.