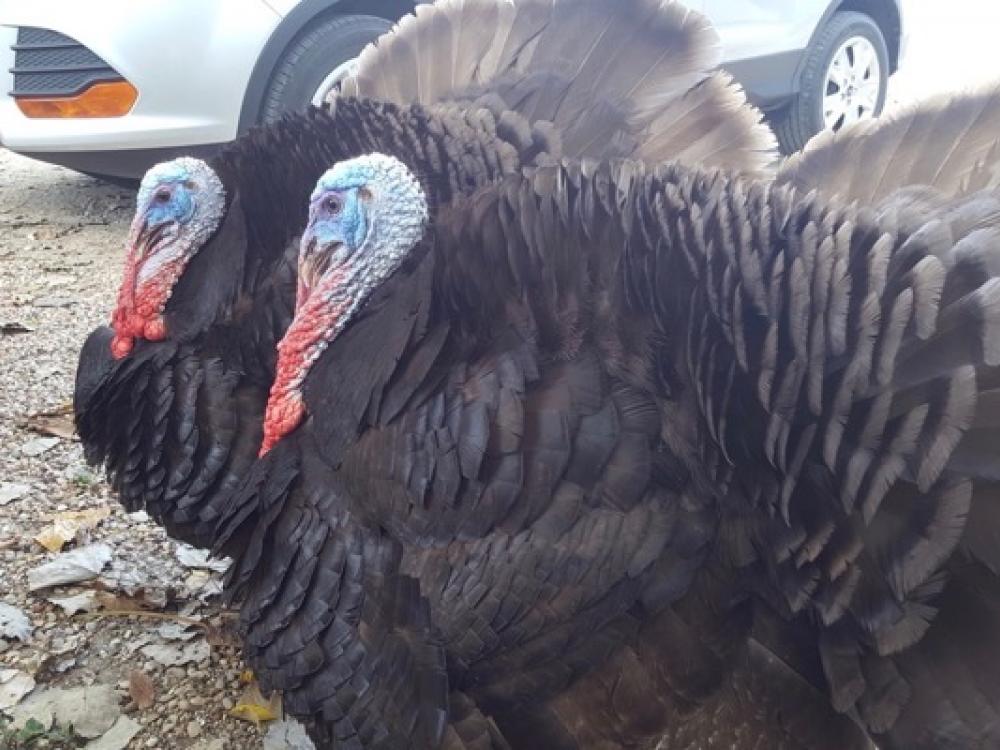 A pair of turkeys will be dining on a rich buffet of veggies and grain at a local sanctuary this Thanksgiving instead of being the main course, thanks to a Fort Worth woman.

Helen Altman, a professional artist and animal lover, adopted the turkeys as chicks from a Fort Worth feed store in March where they were likely destined to be somebody's hoilday meal.

She’d raised chickens all her life and poultry husbandry was something of a family art.

“My mother always told a story about my grandmother raising turkeys,” she said. “Somehow a preacher made off with two turkeys that she was raising as Christmas presents and she never got over it,” she said with a chuckle.

Altman named the four-week-old toms Tom and Eddie. Soon they were following her around her home in the Cultural District, which doubles as her art studio. 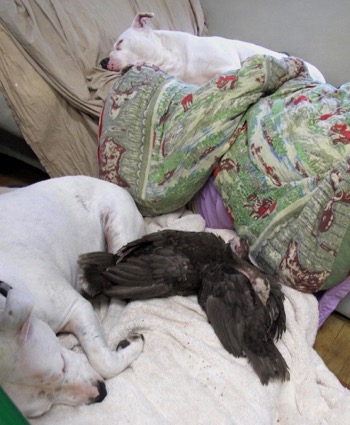 Altman said even as chicks, the tiny turkeys displayed the mannerisms of the species.

“I can remember thinking ‘They look just like turkeys,’” she said with a laugh. “Even when they didn’t have all their feathers, they’d strut.”

When she saw them do their turkey dance for the first time, with wings spread, cocked at an angle, it reminded her of Native American dances.

“It’s kind of like the first time I saw a bald eagle in Maine," said Altman. "You see them represented in imagery all over the place. When you experience them in the flesh, it seems profound.” 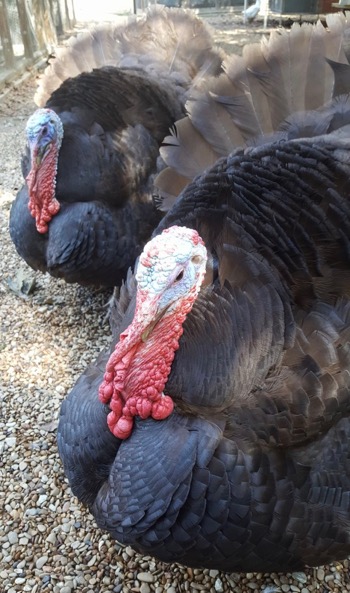 She kept them inside for the first few months before moving them to a fenced area in her shady front yard. They dined on sunflower seeds, frozen peas, canned tuna, flour tortillas and two heads of Romaine lettuce a day. Over the weeks, they grew fat and their chocolate-colored feathers turned glossy.

After they reached their full size, Tom and Eddie ruled over her two pit bulls and a beagle.

“You’ve heard the term ‘Turkey Lurkey’? They lurked!” said Altman. “They’d circle the dog beds until the dogs would get up and leave.”

The toms relished human visitors and their wattles turned red and blue displaying their excitement.

With their pen bordering the sidewalk, the turkeys quickly gained fans among the neighborhood dog walkers, joggers and kids with parents in tow who regularly stopped by for a visit.

However, Altman became anxious as the turkeys became more and more vocal. They gobbled every time they heard the garbage truck or a lawn mower or other startling noises.

She frequently popped out of the house to quiet them down and was starting to fret that they might be bothering the neighbors.

She cringed one day when she came back from a dog walk to find one of the turkeys on her neighbor’s roof.

"Eddie was the one who’d fly up. He was the more personable of the two. I’d talk him down with a can of tuna."

When a state police officer came by to see if she was harboring prohibited fowl after being tipped off, she knew she had to find them a new home. Turns out Tom and Eddie were legal, but if someone complained they could be removed.

She called Rogers Wildlife Rehabilitation Center, which specializes in bird care, to help find a rural setting where they could live out their lives.

She was surprised and thrilled when Kathy Rogers, founder of the center, immediately said, “I’ll take ‘em!”

Rogers explained that her beloved turkey “Tommer”  had passed away and she had been hunting for a special bird to assist in educational programs.

Although she had tried to replace him over the years, she hadn’t found another turkey as personable as Tommer – that is until Tom and Eddie came along. 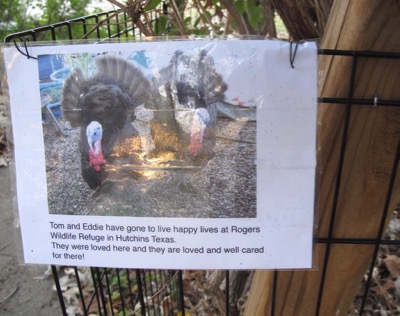 A sign on Tom and Eddie's former pen in Fort Worth informs friends where they've gone. Photo courtesy of Helen Altman.

Altman said it was heart-wrenching driving them to their new home in Hutchins. But she knew she'd done the right thing when Rogers greeted them with a warm welcome. Pictures soon followed showing the staff doting on them.

Rogers said Tom and Eddie have quickly become the official turkey ambassadors at the Center. They spend their days roaming the premises and greeting visitors.

“They will let you pet them and don’t mind having kids come up to them,” said Rogers. “They love the attention.” 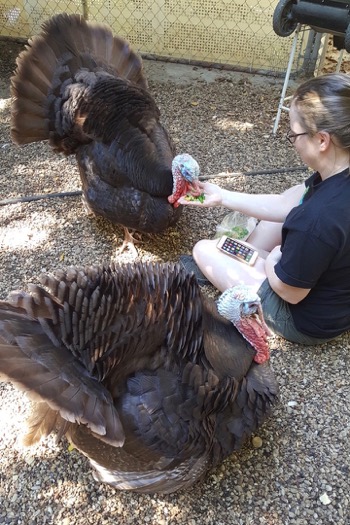 At night, they retire to their coop with a gaggle of turkey roommates, safe from bobcats and other predators.

Altman sponsors their care and ships them their favorite foods.

“Whenever I feel sad and miss them, I go online and buy them something.”

But she knows they’re living the good life.

Rogers said the turkeys are low maintenance and bring a lot of joy to the center.

“They are very smart. It’s a very huge misconception that turkeys are dumb.”

As for turkey this Thanksgiving, you can count Rogers out. Though not a vegetarian, she hasn’t had turkey for Thanksgiving in 30 years.

“I can’t eat it. Sitting in the pan, they look too much like Tommer.”