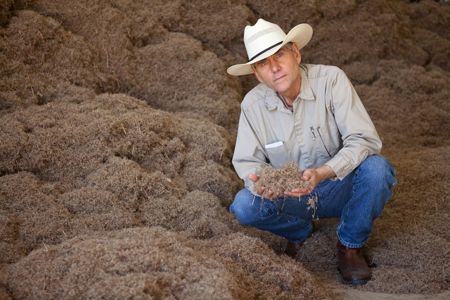 Bill Neiman, owner of Native American Seed, at his seed-cleaning facility in Junction. The former Flower Mound resident became an advocate for landscaping with Texas natives while operating a nursery in Argyle. Courtesy of Callie Richmond/Texas Tribune.

North Texas’ continuing drought, critically low reservoir levels and prospects for increasingly erratic weather under climate change are sending a signal that’s getting more insistent, and it’s not difficult to decipher:  We need to conserve water.

For homeowners, the quickest and easiest way to do that – short of becoming a vegetarian – is to cut back on all that outdoor irrigation. Experts say households in this part of the country typically expend 50 to 70 percent of the water they use on watering the lawn.

If you ask Bill Neiman, co-founder with his wife Jan, of Native American Seed, that’s not a good use of resources. Neiman takes a dim view of the thirsty lawns that most people maintain in North Texas, seeing them as monocultures that put their owners on a treadmill of having to mow, weed and fertilize. These lawns, which are typically composed of exotic turf like Bermuda and St. Augustine, drain their owner’s time and wallets while also harming groundwater, beneficial insects, butterflies, birds and clean air, Neiman says.

There is a better way. But first let’s back up for a moment to the summer of 1980. That’s when Neiman, living in the Dallas suburb of Flower Mound, had his native grass epiphany. The DFW area was sweltering through an historic heatwave with 69 days that exceeded 100 degrees. Dallas recorded five scorching days above 110. 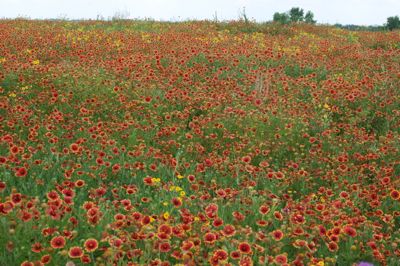 Native wildflowers on the Flower Mound that the city was named for. Courtesy of Alton Bowman.

In Flower Mound, Neiman saw lawns dying or worse, people were watering them furiously to keep the turf alive. The town’s water wells strained to provide enough drinking water and some residents couldn’t flush their toilets on the second floor of their house because the pressure had dropped so low, Neiman recalls.

But as he commuted from Flower Mound to his nursery in Argyle, Neiman noticed another phenomenon. Nature was coping. The grasses in the pastures and byways was not dying. When he got out to look around the countryside, he saw insect and plant life continuing to, if not thrive, survive. A few wildflowers were even blooming.

He realized what a burden the modern lawn represented. If people could use native grasses, they would be spared having to irrigate, and they could step off the pesticide-fertilize-mow treadmill. Neiman and his company went on to develop Sun Turf, their first native grass mix designed for drought-tolerant residential use. 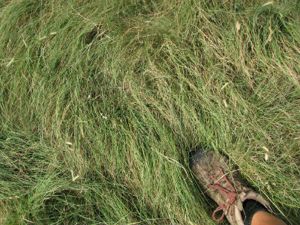 Sun Turf, a mix of buffalograss and blue grama, took about 10 years to perfect. Later came Thunder Turf, which added curly mesquite to the mix. These native grasses can exist on rainfall in North Texas and don’t even need irrigation once they’re established. Light watering can keep them green in August.

Both mixes rely on a base of buffalograss, because it’s incredibly temperature-hardy, with a range from Mexico to Canada, and unlike modern cultivated grasses it has no known diseases or pests.

“It goes from 110 degrees down to minus 40 degrees and can live on down to 11 inches of rainfall a year,” Neiman says. “If you never mow it, it grows to what 5 inches? And at a glance it looks like Bermuda, so what’s the problem?” The blue grama and curly mesquite, minority members of the mix, add diversity, resilience and dimension to the turf.

The mix of grasses helps address a complaint about pure buffalograss, that it grows too thin and can be invaded by cultivated grasses from next door.

People installing native turf have to remember to NOT do everything they’ve become accustomed to, says Neiman. If they stop watering, stop the pesticide and fertilizer applications, the buffalo mixes, once established, will grow thick and green.

By contrast, Bermuda is “an invasive exotic” that came originally from Africa, and St. Augustine hails from Caribbean, Neiman says disparagingly. Because these plants didn’t evolve in North Texas, they require coaxing with fertilizers and weed treatments as well as regular watering.

Native turf will grow a little higher, look a little different (even if it evokes Bermuda) and wave a bit more in the wind than conventional domesticated grasses. Both Sun Turf and Thunder Turf grow to a height of 3 to 8 inches, and won’t be happy if shorn to less than 3 inches. Neiman acknowledges that this challenges people’s concept of what the turf enveloping their home should look like. However, there are multiple consolation prizes for making the aesthetic shift, including helping save the next generation from water scarcity.

“People are going to have to get over it, because one of these days they’ll go to the water faucet and nothing will come out,” he said. “Or water will be $50 a gallon.” 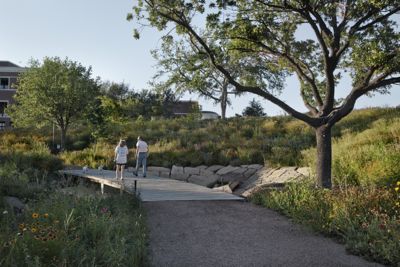 The Native Texas Park at the George W Bush Presidential Library and Museum on SMU campus. Courtesy of SMU.

According to Dotty Woodson, the Texas A&M extension agent who put together the NorthTexas SmartScape program 15 years ago to help people create drought-tolerant landscapes, many people are “getting over it” and switching to native turf. 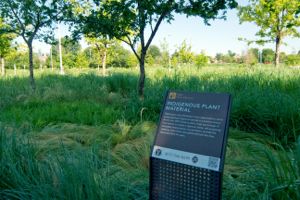 North Texas also now boasts several public installations that are raising the profile of drought-tolerant grasses. The grounds at the George W. Bush Presidential Library and Museum feature Habiturf, the same blend as Native Seed’s Thunder Turf. In Fort Worth, the Botanical Research Institute of Texas, has installed a buffalograss mix in front of its building and as part of a pathway through a native prairie demonstration project at the back of its facility.

The buffalograss and the prairie project aim to help people see that urban landscapes can be restored to the natural ecology that has endured in this area since before it was urbanized, said Karen Hall, an applied ecologist and plant physiologist at BRIT.

“You’re reverting to a system (of native grasses and plants) that evolved over millions of years, so it’s tough as nails,” Hall said. “And it’s highly related to what Texas is, and to the people who were here and still are here. So why wouldn’t you want to try to plant it and help people relate to their ecology better?”

SmartScape unequivocally promotes buffalograss as “the best turf for this area” but the program’s educational materials note that others in DFW still recommend “invasive” water-dependent Bermuda and St. Augustine. 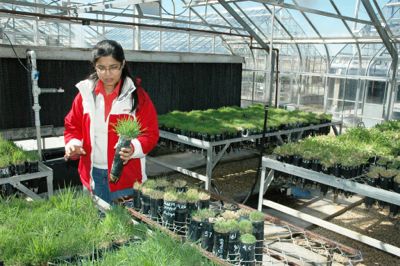 Ambika Chanrda, associate professor of turfgrass breeding and genetics at A&M’s Texas Agrilife Research and Extension Center in Dallas, has been working on a more drought-tolerant St. Augustine, because this bright green, thick-bladed grass remains popular for lawn and play areas.

Her new variety, DALSA 0605, should be in commercial production by 2015, the center announced last month. Chanrda, whose work has been funded in
part by the Turfgrass Producers International, said more tests will be needed to precisely quantify DALSA 0605’s water savings, but it will do better than other varieties because it grows deeper roots and stays greener for longer (5 to 6 weeks) in drought conditions.

Dr. Hall notes that native grasses don’t just save on water, they actively help support nature, starting with the microbes in the soil that no-pesticide grasses allow to thrive, which support the insects, which feed for the birds, and on up the food chain.

Woodson describes her own buffalograss lawn as a little grayer, lighter green and a little more “rough” than conventional turf, but also says her experience with the grass has convinced her that it has a special beauty. It waves gently in the wind, and only requires watering about two or three times at the height of the summer heat. Ironically, about the only thing that can hurt it is overwatering, which can kill buffalograss.

She predicts that buffalograss may be at a tipping point, poised to become the new norm because it would quickly ease stress on drinking water supplies, and on people, who are increasingly being asked to comply with water restrictions that limit lawn sprinkling to once or twice weekly. 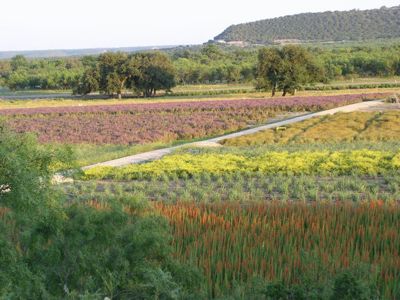 Neiman, too, says he sees the change taking place, albeit slowly, lawn by lawn. The company he started with a borrowed shovel, rake and lawnmower 40 years ago has experienced slow, steady growth. Relocated to Junction, Texas, Native American Seed now has a staff of more than 20 employees and sends out catalogs to about 125,000 Texans.

“That puts a model [yard[ in every neighborhood out there,” he said. “Most people know they cannot keep doing this [excessive lawn watering]. They do maintain a state of denial. But deep inside everybody knows this thing is dangling by a thread.”

“This whole idea of this lawn is ridiculous in the first place. The idea that we should have a monoculture lawn of some alien imported species that cannot be maintained without inputs of water and fertilizer…nothing in nature happens like that.”

WHERE TO FIND NATIVE GRASSES

Journalist Barbara Kessler of Flower Mound has specialized in environmental issues and children’s welfare, working in TV and at newspapers, such as The Dallas Morning News. She operated a syndicated green living website that provided stories to dozens of TV stations. She produces EcoBayou.com, an online resource that advocates for slowing climate change, accelerating green energy and saving wildlife. Contact her at Barbara@EcoBayou.com.