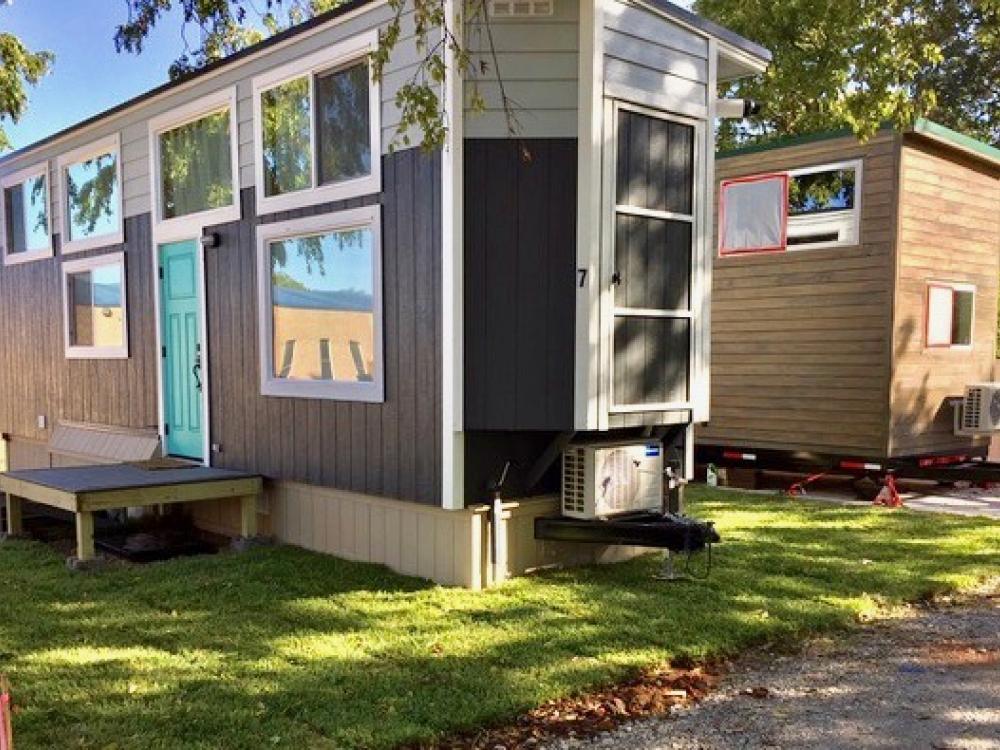 The tiny home community in Lake Dallas is the first of its kind built within city limits in North Texas. Photo courtesy of Terry Lantrip.

Earlier this month, Terry Lantrip, owner of the Lake Dallas Tiny Home Village, welcomed residents to the first in-town neighborhood built exclusively for tiny houses in North Texas. Now five tiny homes are snuggled into a one-acre field that was once part of a historic farm. 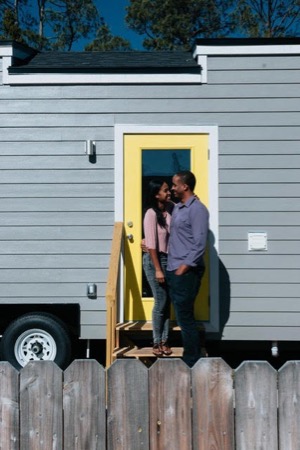 The tiny home enclave broke ground in February after three years of planning and hard work. Launching the first exclusively tiny home compound in the area, Lantrip struggled to gain acceptance for a concept that is changing people’s perceptions of living small.

“The Lake Dallas Tiny Home Village has been one of the most challenging projects I've ever worked on,” said Lantrip. “Being the first of its kind, we had to take each part of the process and, in many cases, completely come up with a plan or remedy. There was a lot of learning about tiny homes and the tiny home lifestyle and there was a lot of teaching especially city staff, the contractors and tradesmen.”

Over the next few months, a half dozen more tiny houses will move onto the property which can accommodate 13 homes. The residences range from 200 to 400 square feet and each will occupy a plot of approximately 800 to 900 square feet, leaving room for a small garden and lawn. Two home sites are still available.

In addition to the initial cost of their home, each homeowner pays rent for their plot of land starting at around $500 per month that includes access to a washeteria, an eventual clubhouse, outdoor communal shaded areas and community garden. Water, sewer and trash pickup are included but each homeowner pays for their own electric service.

The Lake Dallas Tiny Home Village is located at 206 Gotcher Ave., near the historic downtown area of Lake Dallas. Nearby restaurants, shopping, schools and parks offer convenience to the new homeowners while still maintaining the small-town atmosphere of this unique municipality on the shores of Lake Lewisville. 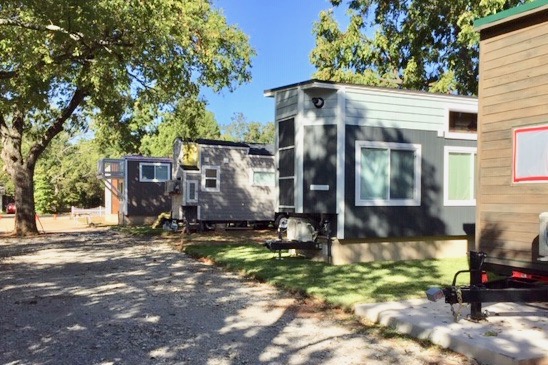 For Lantrip, his vision of a tiny house enclave has reached far beyond what he ever dreamed. Urban planners, community leaders, business people and tiny house aficionados have flocked to the neighborhood and sought Lantrip’s input about similar developments of their own.

“We have other small developers and tiny home enthusiasts who want to build their own tiny home villages that have asked for help since we've been successful on this village. Currently, I'm working with one developer who wants to build two villages in cities just outside of DFW.”

Lantrip has also had a tremendous amount of support from other tiny house devotees.

“It takes a village to build a village and it couldn't have been more true with this project,” he said. “So many of the tiny home enthusiasts in North Texas turned out to attend the way too many public hearings and city meetings. That actually helped the elected officials get to see and know the type of people who were potential residents.” 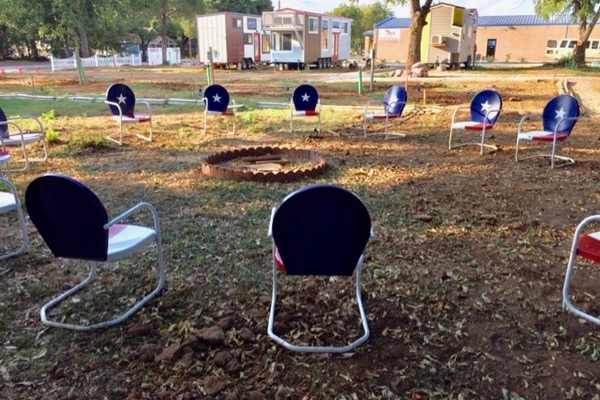 Many even volunteered at the village’s workdays, helping to clear the land and remove debris. “People as far away as New Zealand were sending their support and good will to see it through the end.”

Most of Lantrip’s new residents are downsizing from conventional homes that are often ten times larger than their new tiny houses. Many are seeking a simpler way of life.

Tiny home owners Marek and Kothney-Issa “Ko” Bush recently moved to Lake Dallas from a mobile home park in Florida. The young homeowners were tired of the clutter when they first downsized.

“In our old home, we had furniture that was literally in a space just to fill up that space,” Marek admits. 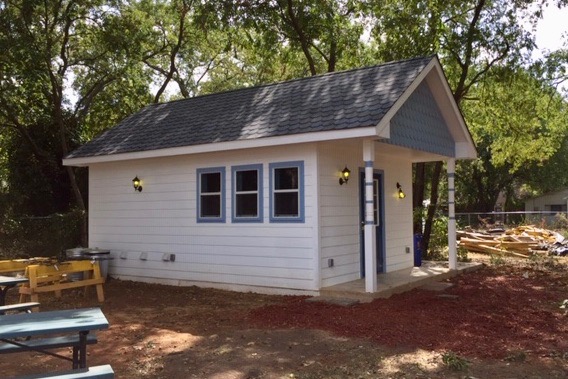 Many people have inquired if the washeteria at the tiny home village is for rent.

The village’s residents are from all walks of life including teachers, managers and a few retirees. Some will live alone, others as a couple and a few have children. Most are advocates of green living and they understand that living smaller has big benefits, not only for themselves but also for the environment.

TinyHouseBuild.com notes that the average full-sized home generates 28,000 tons of CO2 per year while a tiny house only creates about 2,000 tons. Considerably less lumber and other building materials are needed for a tiny house – which means far less waste.

Marek admits they also had three economic objectives when they decided to go tiny; flexibility so that it was easy for them to move their house on wheels as their careers evolved, putting their income towards owning rather than wasting money on renting – plus creating value in an asset that they could either sell or use as an Air B&B if they decide to move back into a full-sized home in the future. They have even created a YouTube channel that chronicles their journey.

At a cost of around $70,000 to build, the average tiny home’s mortgage and other bills can be a half or third of a conventional home, saving the owner thousands of dollars per year. Another benefit includes closer ties to nature. 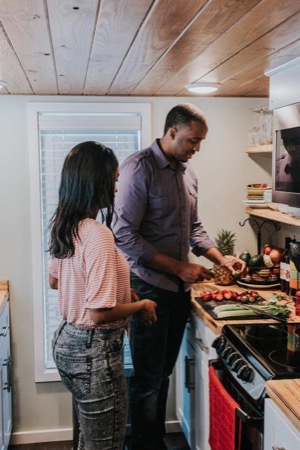 Marek and Ko Bush in their tiny home's kitchen. Photo by Tara Young.

Marek stresses that they don’t miss their old lifestyle and that the compact size of their new home doesn’t mean that they had to sacrifice comfort.

“We moved from an 1,100-square-foot loft that had so much wasted space and stuff. Now everything has a use.”

Since he and Ko love to cook, they especially love their spacious kitchen.

The tiny house mystique is harder to quantify. These mini homes just seem to create a counter-culture that that destroys the adage, “He who dies with the most toys wins.”

For these new “tiny” homeowners, less is definitely more as they shed the trappings of their former existence and find a more peaceful and easier way to be.

“It’s been extremely freeing to us,” says Marek.