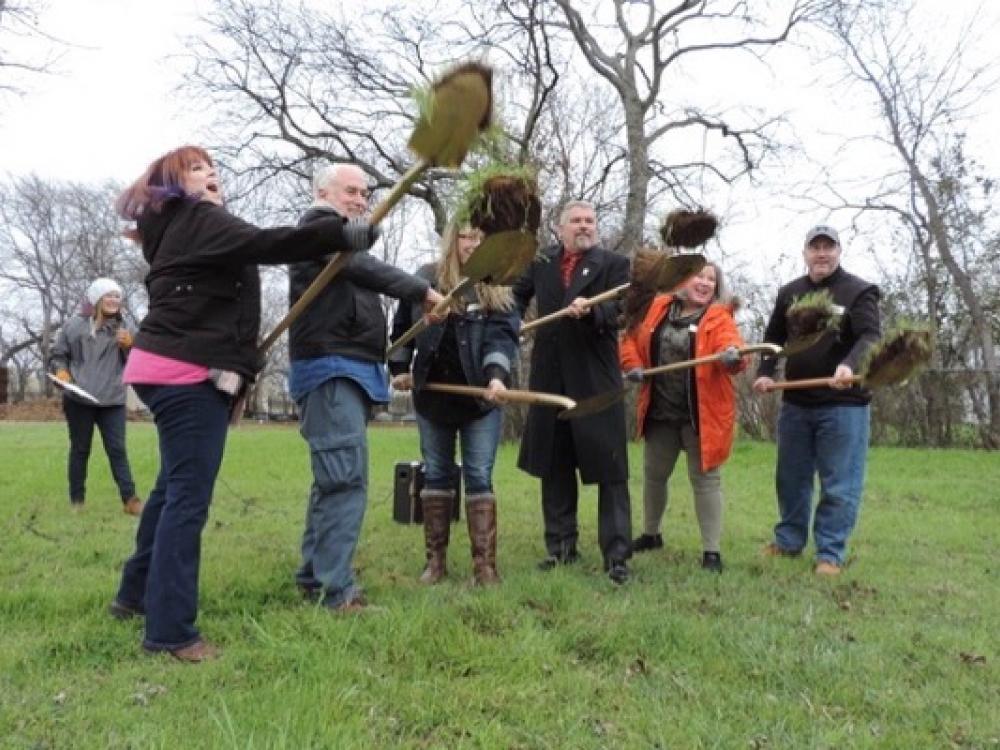 Tiny houses in DFW are hitting the big time.

A new enclave has broken ground on the northwest side of Lewisville Lake and it’s making national news.

The Lake Dallas Tiny Home Village, speculated to be the first development of its kind in the country, is located within the town of Lake Dallas, a community of nearly 8,000, about 10 miles southeast of Denton. 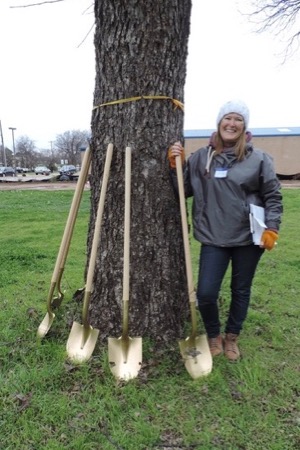 The project is being developed by Terry Lantrip, who’s spearheaded many other iconic projects in the community, along with the help of Beth Ann "B.A." Norrgard, a Garland-based tiny house owner and nationally known tiny house advocate.

“My dream of a tiny house community is finally coming true!" Norrgard said in an email invite to the groundbreaking. "Words cannot describe my glee.”

Future residents, friends and the Lake Dallas Mayor and City Council members gathered on a chilly morning earlier this month to drive golden shovels into the frozen earth in a symbolic launch to what will soon be a bustling neighborhood of thirteen homes, busy families and a variety of shared amenities.

Norrgard addressed the crowd of supporters,

“Today is a really big day!” she said choking up with emotion. “The spotlight on us is national and international.” 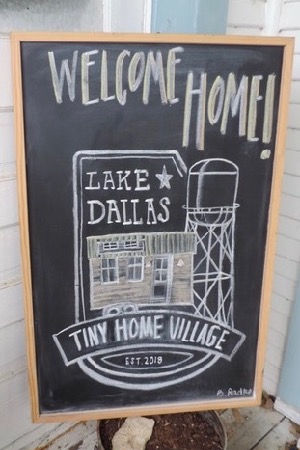 For Norrgard, a former paralegal who traded her Tudor home near Lakewood in Dallas for a tiny house in 2014, this village is the culmination of years of encouraging local cities to accept tiny house communities. Her own tiny home has been exhibited at the State Fair of Texas, Earth Day Texas and numerous other events across the country. She has been one of the most outspoken proponents of the lifestyle and has helped to bring tiny house living into the mainstream.

DOWN ON MAIN STREET

According to Norrgard, what makes the Lake Dallas village unique is that it’s located within city limits. And all homes, in addition to being moveable, must be built to International Residential Code Appendix Q, a guideline of safety standards for features such as loft ladders and emergency exits.

Developer Lantrip acknowledged that the journey from concept to completion has not been without its challenges. He has some advice for other tiny house trailblazers. 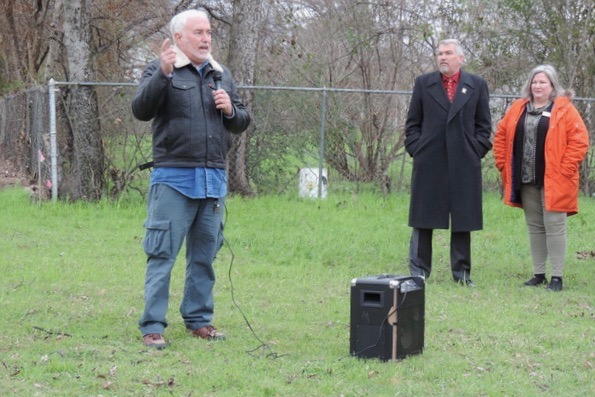 Developer Terry Landrip addresses the crowd as the Lake Dallas Mayor and Mayor Pro-Tem look on.

“Developers need to know they're probably going to fight an uphill battle since most cities don't understand tiny homes and they aren't able to think outside the box.”

But Lantrip also notes that the upside of such districts is that they inject vitality into an area.

“There's substantial value to these pocket communities because they bring so much attention to the city. Other developers, restaurant folks and other business people want to be where things are happening and where the action is.”

Just as shovels were prepared to turn the first mounds of soil, Lantrip addressed the crowd and expressed that the village is a work in progress.

"We’re going to create an environment where trial and error are OK.”

Then he shared that the one-acre plot that the village will occupy was originally part of a large farm with a rich history. 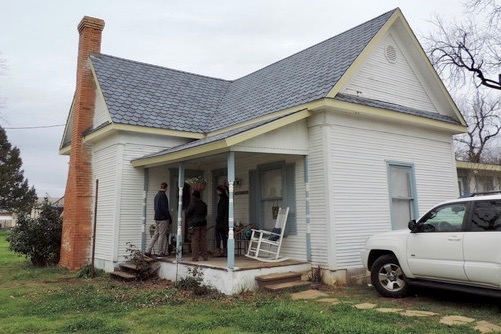 A 1910 farmhouse will become a community center for the village.

The family who owned the land had been seeking a use for it so that the towering ancient pecan trees and the 1910 Victorian farmhouse would be preserved. Lantrip and Norrgard’s vision honors the farm’s history as it embraces the future. Even the farmhouse will eventually become a clubhouse of sorts for the village as it will include a workout room, meeting zone and a communal kitchen/dining area that can serve for gatherings and parties.

Lake Dallas Mayor Michael Barnhart was complimentary of the development as well as the tiny house movement in general.

“I’m for it,” Barnhart said. “They’re bringing in a great concept.”

His hope is that the residents will become part of the extended community in Lake Dallas.

Mayor Pro-Tem Andi Nolan, was also on board.

“I’m a fan of minimalist living,” she expressed. “This is not just a bunch of hippies.” 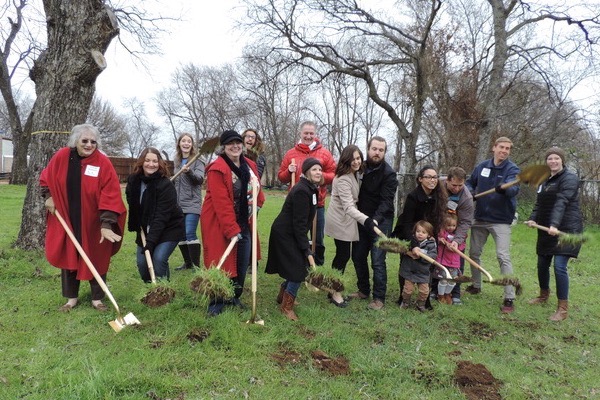 Future residents of the Lake Dallas Tiny Home Village, shown here at the groundbreaking, expect to move in a few months.

When one mentions tiny houses, many people visualize bearded millennials with their scrap-built homes wedged into inner-city plots or perhaps communities far from major urban areas.

The Lake Dallas future homeowners seemed to reflect a cross-section of Texans including middle-aged singles, young couples and a few families with children.

Josh and Jaynelle Borski and their two youngsters will be moving from their 2,200-square-foot home in Keller to a tiny house that is barely larger than their current garage. Their commitment reflected a mindset that renounces modern-day excesses.

“We are excited about living in a tiny house because it’s an adventure that we can do together,” said Kristen with a smile.

Residents will begin moving their homes to the site in late April or early May, depending on weather and other factors. Each tiny home will incur rent starting at around $500 per month that includes access to the vintage clubhouse plus a free washateria, spacious shaded back yard and community garden. Water, sewer and trash service will also be included in the rent. Each home will have its own electric meter and will be billed separately.

Homes will average from 200-400 square feet with yards of approximately 800-900 square feet each, plenty of room for a small private garden and lawn. Twelve of the thirteen plots have been claimed as of this article’s publishing.

Lake Dallas itself is that rare combination of small-town feel but still within the shadow of big city life. The Lake Dallas Tiny Home Village is located at 206 Gotcher Avenue, a short walking distance from the community’s historic downtown area with restaurants, shopping, parks with playgrounds, schools and even a town library. The shores of Lewisville Lake are less than a mile away and a pleasant bike ride.

Lantrip, who has been in Lake Dallas for 34 years and formerly owned the town newspaper, mused,

“The people who will be moving into the Lake Dallas Tiny Home Village are intelligent, caring and will be a great asset to the city of Lake Dallas. They’re a really good group of people who want to live a more simple life but a more fulfilled life not tied down to a large home. I expect they're going to be huge contributors to our community in serving on boards, attending community events and contributing to our restaurants, shops and other businesses.” 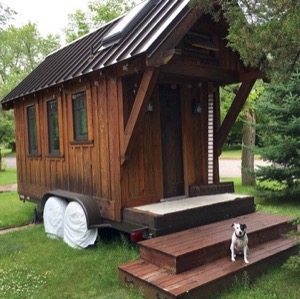 For those who desire the lifestyle but aren’t sure where to start, Jet Regan, who maintains a local blog, The Bookend Tiny House, has some thoughts.

“My biggest piece of advice is ‘show up.’ If you don’t know what to do next, don’t stay stuck - reach out to the community. Showing up means not only asking for help, but also seeing where you can volunteer. Everyone’s got something to bring to the table!”

Several attendees of the Lake Dallas Tiny Home Village groundbreaking included members of a local Meetup group, DFW Tiny House Enthusiasts, many of whom had helped clear brush and other debris away at the project.

Regan, who is saving for her own tiny house, sees owning a tiny home as a long range goal.

“Some dreams take more time and persistence (and a few breaks in between) to accomplish. But if it’s something you really want… just keep going, and reach out for support when you need it!”