This article is part of a Green Source DFW series profiling nominees for the 2011 Environmental Leadership Awards. Nomination is now open for the 2012 iteration of the awards. Make Your Nomination Today. 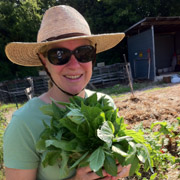 As a 2012 nominee in the Green Source DFW Environmental Leadership Awards Entrepreneur section Heather Rinaldis’ Texas Worm Ranch has come a long way since she began her first worm bin in her garage as a hobby five years ago.  “The rest is history,” she says.  “The business grew organically to fill demand and is still growing to this day.”   (Heather Rinaldi with Spring Greens)

About the ranch, the self-described “worm rancher” raises red wiggler composting worms, however she also points out that this particular worm living in the top few inches of very rich nutrient sources in cool regions, like horse stables or dairy farms in Minnesota are indeed, the best composting worms, but not generally found in the area. 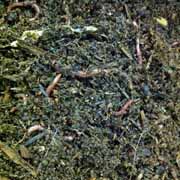 That is why Texas Worm Ranch sells these little red wrigglers to encourage indoor systems to consume food waste.  The red wriggler worm recycles nutrients from organic waste and this year Rinaldi estimates her worms will consume almost 100 tons of restaurant waste, horse stable waste, newspaper, cardboard, leaves, wood chips and other carbon based waste.
Texas Worm Ranch sells their worm castings [poop] to organic gardeners as a nutrient and microbe rich soil amendment, and makes a liquid, worm casting yard and garden treatment called Worm Wine ™.  (Worms)
“We sell the worms all over the country for others to start their own nutrient recycling with their food waste,” Rinaldi explains of the business of which she has also added a partner, Steve Clary.  The company is also partners of the Dallas Eco-op, which Rinaldi was a founding partner of and, the ranch is also searching for a new space as the current 6,000 square-feet is not big enough anymore.

“We might be the largest worm grower and one of the very few worm casting suppliers in the state,” she says adding “There are many varieties of worms and they all have their purpose. The worms in our DFW soil are “Alabama Jumpers.”  However, Rinaldi says Alabama Jumpers are deep burrowing worms that aerate the soil and are not good composters, thus the need for her red wrigglers.

“Worm composting is an efficient way to turn your food waste into a valuable resource to safely and naturally boost your yard, garden and potted plants,” Rinaldi explains.  “The worms neutralize odors, so it is done “smell-free” and you remove the air pollution and landfill needs of your waste.”  Of the biggest challenges at the ranch, Rinaldi says it’s keeping the worms cool in summer.  The ranch was also negatively affected by the aerial mosquito spraying in Dallas County as it hit the organically grown crops and they were unable to sell the produce they had worked to grow.  “That hurt us both emotionally and financially, but there are still wins too like every time a child is interested in learning more about how to care for the planet or grow their own food,” she adds. 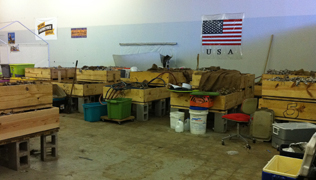 As Chief Worm Rancher, Rinaldi says her number one job is always to make sure the worms are happy and she does. “We want to create the best worm casting possible, for our organic gardens and for our customers.  Quality matters to us.  It brings a smile to my face to educate and enlighten people that they can re-purpose their own safe and natural soil amendment from their food waste, and even grow their own organic food,” she concludes laughing “Worm farming is always a good party conversation too.”

Rita Cook is an award winning journalist who writes or has written for the Dallas Morning News, Focus Daily News, Waxahachie Daily Light, Dreamscapes Travel Magazine, Porthole, Core Media, Fort Worth Star Telegram and many other publications in Los Angeles, Dallas and Chicago.  With five books published, her latest release is “A Brief History of Fort Worth” published by History Press.  You can contact her at [email protected]