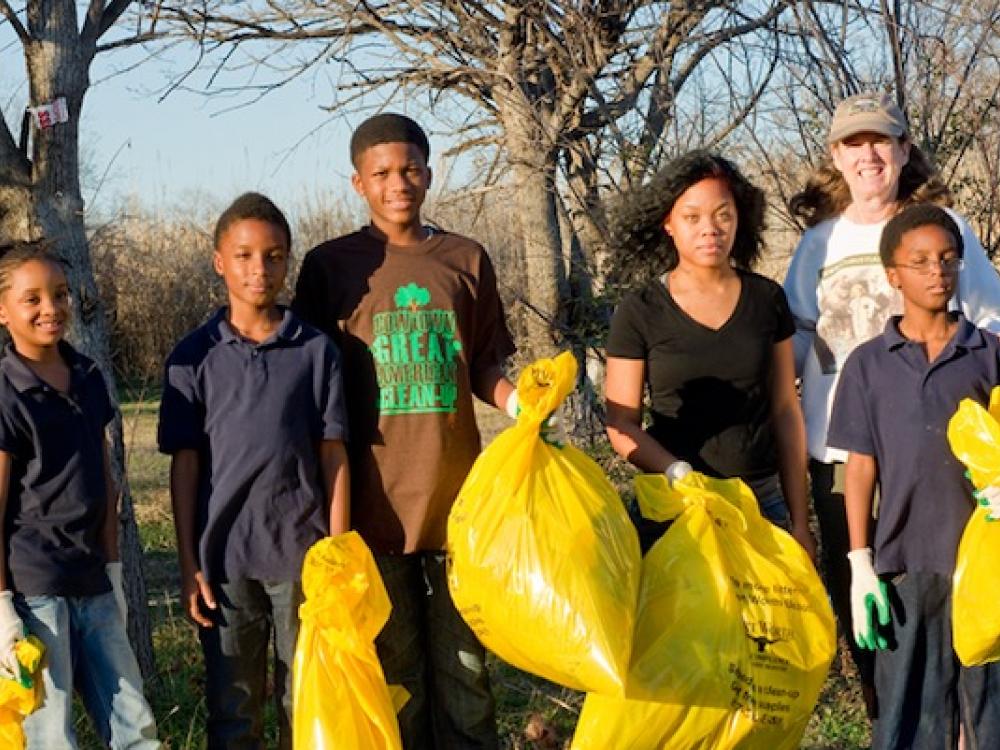 Fort Worth resident Carol Sullivan came up with a unique way to clean up her block.

In 2009, when Sullivan was hired as an associate professor of accounting at Texas Wesleyan University, she purchased a home in a historic neighborhood near the university. The 3-year-old 1,200-square-foot home was located on a street lined with foreclosed property. As a result, she snapped it up for $30,000, about a third of its original value.

However, after moving into her new home, she was appalled at the trash she saw on the street everywhere.

“I had just moved from Washington state, which is very clean,” said Sullivan.

When some neighborhood kids knocked on her door looking for work, a light bulb went off. She saw a way to use the money she saved on her home to help the kids and the neighborhood.

“I said to myself, ‘If I can buy this house for $30,000,  I’ll take the difference I would have spent on a house payment and use this to help the community.”

At first, she enlisted three children to help her pick up litter on their block. She paid them a weekly allowance of $10. Their cleanup quickly became a weekly ritual, and the group grew.

The group meets every Friday at 4 p.m. during the school year, rarely missing a week. Sullivan, who has no children, has strict rules for the crew. First, she meets with their parents to get their permission. Kids must be in good standing with their families and schools, well behaved and ready to work. And she doesn’t allow bad language, which she said was tough battling at first.

“I fined them $5 for cursing,” she said, which broke their habit.

There are some diversions. If it’s raining, they stay indoors and play trivia games.

During the hot summer months, they knock off except for holidays. Instead, Sullivan treats the kids with trips to the YMCA pool.

Over the years, they’ve taken on new challenges. They’ve broadened their territory. Now Sullivan ferries the group to nearby vacant lots, housing projects and parks to clean up litter.

The kids say they’ve learned from the experience.

Meanwhile Shacayla Payton, an 8-year-old who’s been a Weekly Wonder Worker for more than two years, has learned to save. She’s stowed away $95.

Although the project continues to thrive, its future is uncertain. Sullivan is leaving her position at TWU and moving back to Houston to care for her aging parents in the summer. She is searching for someone to take over managing the Weekly Wonder Workers. She is considering allowing someone to live in her Fort Worth home rent-free in exchange for keeping the project going. She hopes someone else will find it as rewarding as she has.

“I knew I wanted to do something to help,” Sullivan said. “Some people give to [charitable organizations]. With this, I can see exactly where my money’s going.”