From Texas Campaign for the Environment

Environmentalists and local government leaders have praised Texas legislators for passing a bill that will have TV manufacturers take back and recycle obsolete televisions, keeping toxic materials such as lead and mercury out of Texas landfills and water sources. Governor Rick Perry signed Senate Bill 329 into law—unlike in 2009, when Gov. Perry vetoed a similar bill. Advocates count this as one of the rare environmental victories during the 2011 Texas Legislative Session.

“We applaud Governor Perry for signing the TV TakeBack Recycling bill into law,” said Robin Schneider, Executive Director of Texas Campaign for the Environment. “This bill is the long-awaited companion to the Computer Takeback Law that Governor Perry signed in 2007. TV takeback in Texas is long overdue, so this law is a crucial step toward bringing free and convenient recycling to all Texans. That said, there’s still work to be done!” 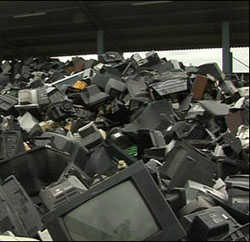 An estimated 25 million televisions are disposed each year in the US. Old-style cathode ray tube (CRT) televisions contain several pounds of lead and most new flat-screen TVs contain mercury bulbs. Typically, less than one in every five old TVs is recycled. Many communities across Texas routinely must clean up illegal dumps of old electronics. The new law will extend recycling opportunities to more Texans.

“This law will help every county in the State of Texas. This is just the right thing to do,” said Fayette County Judge Ed Janecka. “Work crews will no longer have to pick up electronics off of roadsides and creek beds. We thank the Governor and the State Legislature for listening to Texas businesses, retailers, recyclers and residents. We also appreciate the hard work and dedication put forth by Texas Campaign for the Environment in its pursuit to better recycling in our state.”

Twenty-four other states have passed similar laws for electronics recycling, 20 of which cover computers and TVs. Over the next 10 months, the Texas Commission on Environmental Quality will design the rules to implement and enforce the new law.

“With this market-based solution, manufacturers in the television industry will improve their corporate responsibility,” said Zac Trahan, Houston Program Director for Texas Campaign for the Environment. “Now we will work closely with electronics companies, Texas lawmakers and the state environmental agency to make sure this law gets the results Texas needs.”

Advocates say the law will help the economy as well as the environment, and that it will save taxpayer money.

"I am extremely pleased that our lawmakers recognized the need to add television recycling as a companion law along with the existing computer takeback law," said Kim Mote, chair of the Texas Product Stewardship Council and the Solid Waste Manager for the City of Fort Worth. "When properly implemented these two laws will take a difficult-to-handle solid waste burden off of our local governments in Texas.  What is just as gratifying is to see that the bill had TV manufacturer support in its passage," he concluded.

Texas Campaign for the Environment (TCE) is a statewide grassroots organization focused on recycling and trash issues. In 2002, TCE joined the effort to make electronics companies responsible for the life-cycle of their products. TCE organizes Texans door-to-door from offices in Austin, Dallas/Fort Worth and Houston.