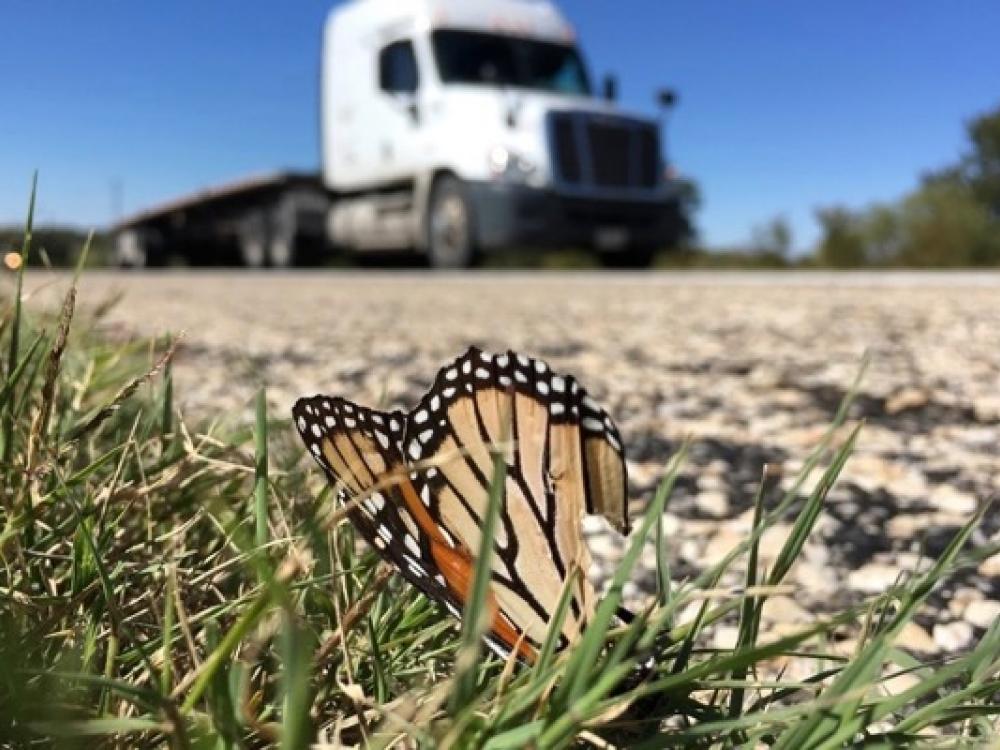 The iconic butterflies are dying in large numbers on Texas highways. Courtesy of Knowledge Engineering Laboratory at Texas A&M.

Dr. Robert Coulson, a professor of entomology at Texas A&M University, explains how Texas cars are having a significant impact on the monarch population and what can be done to protect the butterflies from fatal collisions.
Report by Marshall Hinsley.

MARSHALL HINSLEY: How one cause of the monarch butterfly’s decline may be sitting in your driveway, in this episode of the Texas Green Report, a production of Green Source DFW and the Memnosyne Institute.

The monarch butterfly is one of North America’s most treasured species. Vibrant and beautiful, the monarch population heads out each spring in a migration that spans thousands of miles from Mexico into Texas and all the way through the United States, finally ending in Canada by summertime. In the fall, the butterflies head back south, passing through Texas by October and reaching Central Mexico by December where they wait out the winter.

The monarch is the only insect in the world that’s known to embark on such a massive migration. Such a lengthy trip, though, exposes the monarch to multiple threats that have decimated its population over the last several decades.

Habitat loss, insecticides and increasingly frequent extreme weather events are the main culprits for the monarch’s race toward extinction. But researchers in Texas have pinpointed another hazard worth looking into: your car.

That's according to Dr. Robert Coulson, a professor of entomology at Texas A&M University. It turns out that the millions of cars and trucks incessantly coursing through the state’s highways wipe out a substantial percentage of the monarch population as it makes its way through Texas. 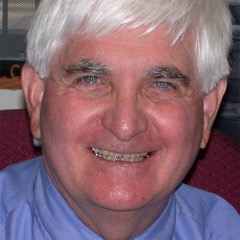 ROBERT COULSON: “We have a good estimate in the fall migration and it's millions of butterflies and it amounts to about 4 percent of the population that actually successfully returns to the overwintering sites in central Mexico. So it's a huge number of insects.”

MARSHALL HINSLEY: Coulson studies the rate of monarch mortality along the state’s highways and says the data shows that the phenomenon of monarchs being taken out by passing windshields indicates that we need to look for a solution if the species has any hope to survive.

Working with the Texas Comptroller’s Office and the Texas Department of Transportation, Coulson and his research team have travelled the state’s highways during the fall monarch migration, stopping at strategic points along the way to count the number of dead and dying butterflies they find on the side of the road.

ROBERT COULSON: “Essentially what's we done is broken the state down into three sections - north, central and southern sections. And we put together a route - a road network and we drive that route and every 30-100 kilometers we'll stop and take a 100-meter section of that road, walk the roadway and count the dead butterflies along the margins of the road. And then pick up and move another 40-100 kilometers down the road and do it again.

“Where we start to see them occur in large numbers or in the southern part of the state. There are two fly ways: there's a central flyway and the coastal flyway. Along the coastal flyway, the mortality occurs on causeways or that’s where we’ve identified these hot spots to be. In the central flyway, most of them are clustered out into the western part of the flyway. And around Del Rio, for example, is one of the areas – Interstate 10 is a major area where these hot spots have been identified.” 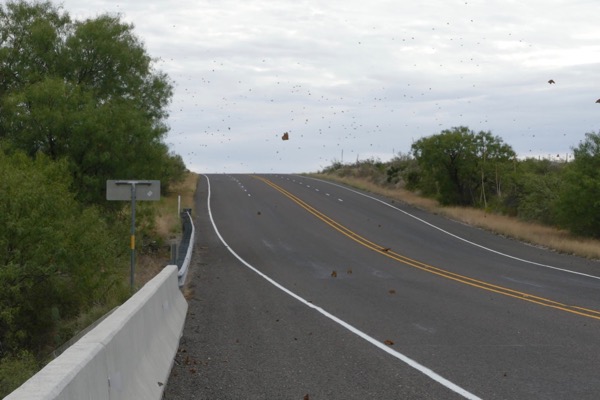 A cloud of monarchs covers U.S. 90 over Sanderson Canyon Bridge in Terrell County, in west Texas. Photo by Sara Dykman.

MARSHALL HINSLEY: The hot spots seem to move from year to year, so what Coulson is trying to do is to determine if there are ways that researchers can predict where they’ll occur so that preventative measures can be put into place before the monarchs pass through.

But first, he has to find the hot spots and learn more about what makes them happen. To do this, he’s calling on Texans to report where they encounter hot spots in their travels.

ROBERT COULSON: “What Texas citizens could do is if they would email me their experience with where they encountered butterflies while they were driving.

MARSHALL HINSLEY: If you ever pass through such a hot spot, you can report the location to Dr. Coulson by emailing him at [email protected].

ROBERT COULSON: It's interesting that if you've ever been in one of those experiences where you're driving through a cloud of butterflies and you're killing them with your car, it's an indelible experience and one that people have been really forthcoming in terms of sharing that experience with us. And so what we'll do is go out and identify where those hot spots are. And then we’re looking for explanations for why they occur where they do, are there topographic variables, for example, that funnel the insects into a specific location and what are the variables that are associated with those hot spots and how recurrent are they? Those are the sorts of things that we interested in trying to find out in our study.”

MARSHALL HINSLEY: Coulson says that once the hot spots are better understood, the work of coming up with measures that will reduce monarch mortality along Texas highways belongs to the Texas Department of Transportation.

Their task, however, has very little precedent. So, what they come up with will contribute to what we can turn to for wildlife protection strategies from now on.

ROBERT COULSON: “Our role here with TxDOT with our TxDot project is to investigate the different kinds of strategies that have been used to mitigate roadkill, for all taxa, and most of that literature centers around mammals and birds and reptiles to some degree. And but it really doesn't include a lot of information specifically oriented to insects. There are a couple of examples or one good example from Taiwan where the approach that was used successfully was to provide netting which caused the insect to fly up above the road rather than through it. And in that particular case for that particular insect, they really reduced the amount of road kill mortality. That would be one strategy that could be done. There are many different tactics that have been looked at. One of them another one that is likely to be valuable for monarchs is to strategically plant flowering plants and milkweed species in ways away from areas where road kill mortality occurs. Our role here is not to make that decision – that's a TxDOT call.”

MARSHALL HINSLEY: As for headlines that seem to pop up each year suggesting that the monarch is on the rebound. 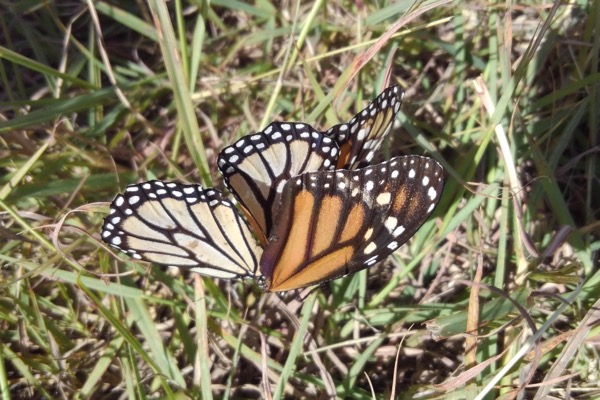 A dead monarch on the side of the road. Courtesy of Knowledge Engineering Laboratory at Texas A&M.

ROBERT COULSON: “The eastern migrating population is clearly in danger or threatened, I guess would be the better word. The populations in the overwintering sites have declined over 80 percent in the last 23 years. And so it is it at a critical stage where that population could diminish and could go away.

“There is no indication that the population is increasing. It’s variable like last year at the overwintering sites, there was a greater successful migration last year than in previous years. And so there's a great deal of variation around the mortality associated with the final migration, how many finally get to Mexico. So that number jumps around. But there's a huge amount of variation associated with it. So just because you had one good year, or one good successful year doesn’t necessarily mean that there’s a change in the trajectory of the population. It’s just one data point out of many over a long period of time.”

MARSHALL HINSLEY: Coulson says his work with the monarch butterflies has been rewarding. He’s gained a greater sense of awe of the monarch's ability to migrate and says it would be a huge loss if the monarch should vanish.

ROBERT COULSON: “The insect overwinters in central Mexico in Oyamel fir trees. And in the spring, they move from that those sites in Mexico through Texas and they reproduce two times in Texas. And then they disperse up into the Midwest and all the way to the east coast and all the way to Canada. And they reproduce two more times during that part of the migration, and then in the fall, they start moving back towards Texas.

“Now those same individuals, the ones that start to move back, some of them travel as much as 3,000 miles to get to the overwintering sites in Mexico – the same insect. They get to Mexico. They overwinter in Mexico, and those same individuals now – the ones that made the 3,000 mile trek – turn around and return to Texas to start the next generation. That is unique amongst all migration strategies that all organisms and the rest of the world have. It is totally completely unique and phenomenal. And so that’s my take on it. I mean, it’s just, it’s so absolutely complicated. It seems unlikely that would be the migration pathway like that or migration phenomenon like that could evolve and but it did.

“I’m an entomologist by trade and I've had an opportunity to work on many different kinds of insects. Most of them are pest insects: insects that either kill your trees or take your food or deliver a disease to you. And a lot of entomology centers around those kinds of organisms. Monarch butterflies represent the first organism that I’ve ever worked on, that everybody likes. It’s a spiritual sort of thing to many people. And the idea that you could work on an insect that so many people associate with, if I can do something in our research program that can help protect that insect and preserve that migration phenomenon, I feel really blessed to be able to do that.”