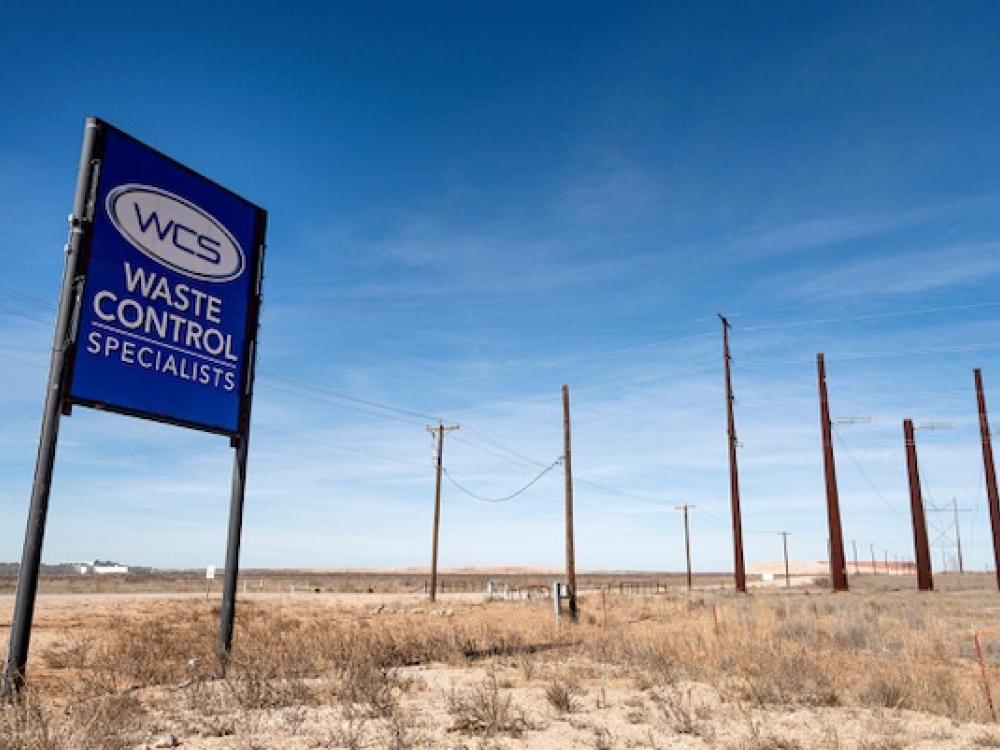 The Waste Control Specialists hazardous waste facility in Andrews County near the Texas-New Mexico border. A bill advancing in the House seeks to ban high-level radioactive waste from being stored in Texas. Photo by Eli Hartman for The Texas Tribune.

As a nuclear waste company’s plan to store the most dangerous type of radioactive waste in West Texas moves forward at the federal level, state lawmakers are aiming to ban the materials from entering the state.

Environmental and consumer advocates for years have decried a proposal to build a 332-acre site in West Texas near the New Mexico border to store the riskiest type of nuclear waste: spent fuel rods from nuclear power plants, which can remain dangerously radioactive for hundreds of thousands of years.

A bill advancing in the House, filed by Rep. Brooks Landgraf, R-Odessa, whose district includes Andrews County — where the proposed facility would be located — seeks to stop the plan by banning that type of radioactive waste from being disposed of or stored in Texas.

But House Bill 2692 would also give that same company a big break on state fees it pays for its existing disposal facility for lower-risk radioactive waste.

But House Bill 2692 would also give that same company a big break on state fees it pays for its existing disposal facility for lower-risk radioactive waste.

“This bill bans high-level waste altogether,” Landgraf said during a committee hearing in March, “and focuses on making low-level waste the safest and best, most competitive and most efficient facility it can be.”

Waste Control Specialists has been disposing of the nation’s low-level nuclear waste, including tools, building materials and protective clothing exposed to radioactivity, for a decade in Andrews County. The company is currently pursuing, with a partner, a federal Nuclear Regulatory Commission license to store spent nuclear fuel on a site adjacent to its existing facility.

Waste Control Specialists and Interim Storage Partners — a joint venture between WCS and Orano USA, a subsidiary of one of the world’s biggest nuclear power companies — declined to comment on the proposed bill through a spokesperson.

Interim Storage Partners applied for the license in 2016.

Scientists agree that spent nuclear fuel, which is currently stored at nuclear power plants, should be stored deep underground, but the U.S. still hasn’t located a suitable site. The Interim Storage Partners plan proposes storing it in above-ground casks until a permanent location is found. It expects federal regulators to make a decision sometime this year.

The plan faces stiff opposition from Gov. Greg Abbott, some oil companies that operate in the region and environmentalists over concerns about the risk of groundwater contamination and transportation accidents. Abbott wrote to federal regulators last year asking them to deny the license application, stating that the proposal presents a “greater radiological risk than Texas is prepared to allow.”

Many in Andrews County support the existing lower-level hazardous waste facility, which pumps around $1 million annually into Andrews County’s coffers through a 5% fee on disposal activities.

WCS has also paid another $59.3 million to the state through a separate fee since 2012.

Landgraf’s bill would reduce some state fees on the existing lower-level waste facility. With states in Texas’ radioactive waste compact, which currently include only Texas and Vermont, a 5% fee that now goes to Texas would be eliminated. For waste from other states, the fee would be cut from 20 percent to 5 percent.

The reductions would cost the state nearly $400,000 per year that now goes to the general revenue fund and more than $1 million per year that’s dedicated to an environmental fund to remediate radiation, according to an analysis by the Comptroller of Public Accounts.

The reductions would cost the state nearly $400,000 per year that now goes to the general revenue fund and more than $1 million per year that’s dedicated to an environmental fund to remediate radiation, according to an analysis by the Comptroller of Public Accounts.

In an interview with the Tribune, Landgraf said many of the state’s largest generators of radioactive waste have not been shipping it to the Andrews County facility because the state fees make its disposal prices too high.

“That means that rather than being shipped to Andrews County, it’s typically remaining on site where it’s generated,” he said. “There’s basically a disincentive to actually utilize the facility. Keeping that facility viable is in everybody’s interest.”

If the company failed financially, he argued, the state would be forced to take over and clean it up.

The facility was struggling financially when it was acquired in 2018 by J.F. Lehman & Co., a New York private equity firm that specializes in defense, maritime, environment and government industries.

Opponents of the bill said during a committee hearing in late March that reducing fees means less money for the state to eventually clean up the facility, if necessary.

“Why let a private company in Texas get out of paying even their minimum fair share for this kind of risky business?” asked Richard Halpin, a Texan who is affiliated with the Sustainable Energy and Economic Development Coalition, a sustainable energy alliance of businesses and organizations.

“You’re taking away the money that we’re going to need to protect ourselves,” added Tom “Smitty” Smith, retired head of Public Citizen, an Austin consumer advocacy group, who has publicly spoken against the nuclear waste facility in Andrews County for years.

“You’re taking away the money that we’re going to need to protect ourselves,” added Tom “Smitty” Smith, retired head of Public Citizen, an Austin consumer advocacy group, who has publicly spoken against the nuclear waste facility in Andrews County for years.

Customers of the facility support the legislation. Edward Selig, who spoke on behalf of Advocates for Responsible Disposal in Texas, a group of companies that dispose of radioactive waste, said the group supports “fair rates.”

“We support any legislation that preserves the best possible pricing,” Selig said.

The facility currently accepts Class A, B and C radioactive waste, which typically includes a wide range of contaminated items such as radioactive gloves, shoe covers and medical tubes. Some environmental and consumer advocates asked Landgraf to also include a ban on “greater than Class C” waste in his bill as well — it falls into what nuclear waste experts call a gray area between the lower-level categories and spent nuclear fuel. That type of waste is currently banned by the Texas Commission on Environmental Quality, but the Nuclear Regulatory Commission may soon consider regulations that would allow WCS to accept that waste.

Landgraf said he chose not to include a ban on that type of waste in the bill because it is technically not considered “high level” by the federal government, although it is currently treated that way for disposal purposes. Nuclear waste experts have told the Tribune that this category can be wide ranging, both in terms of danger and the time it will remain radioactive.

“As a state lawmaker, I have to work within the space that our jurisdiction provides,” Landgraf said. He said he expects strong support for the legislation from lawmakers in the House. “I'm committed to ensuring that high level radioactive waste is not stored in the state of Texas.”