TCU Frogs jump in to save rhinos 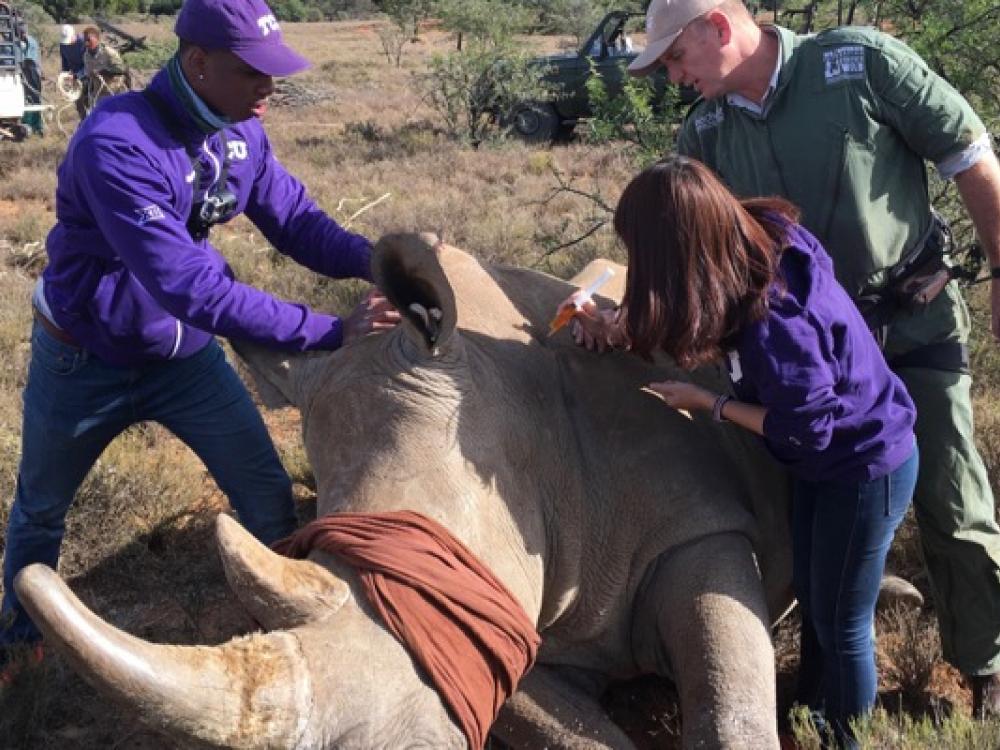 Learn about the TCU Rhino Initiative at a public talk on Jan. 18 at the Fort Worth Botanic Garden Center. Photos courtesy of TCU.

Some students at Texas Christian University, whose mascot is the endangered horned frog, have leaped into the efforts to stop poachers in South Africa from killing off the world’s rhino population.

Hoping to save the nearly 1,500 rhinos killed every year by criminals who pocket nearly half a million dollars for each rhino horn they collect, these students are part of the TCU Rhino Initiative, a program launched by Dr. Michael Slattery, the director of the TCU Institute for Environmental Studies.

Where the TCU Rhino Initiative’s efforts stand now and what these students are up against will be the topic of a public talk slated for 6:45 p.m. on Wednesday, Jan. 18, at the Azalea Room of the Fort Worth Botanic Garden Center, hosted by the Greater Fort Worth Sierra Club.

Without protection, the world will lose another majestic creature that’s a part of our natural heritage within the next few decades, says Slattery,

“They are, in short, the world’s oldest living dinosaur – a link to our past, and arguably the most majestic of the megafauna.” 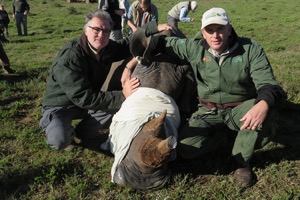 “From an estimated 500,000 at the end of the 19th century to less than 29,000 now. We lose three rhinos a day to poaching and that rate now exceeds the natural birth rates; we are on a very slippery slope in terms of their long-term survival.”

Dr. Michael Slattery, a South African native and the director of the TCU Institute for Environmental Studies, left, founded the TCU Rhino Initiative in 2014.

Rhinos are poached not for their meat but for their horns, mostly by crime syndicates that use their profits to fund civil wars throughout Africa and the Middle East.

After being hacked off the face of a rhino, the horn is ground into a powder that’s in high demand as a traditional folk medicine throughout Vietnam. Nothing more than what you’d get from from grinding up your own toenail clippings, the powder is peddled as a remedy for everything from hangovers to impotence and is even touted as a cure for cancer.

Slattery launched the TCU Rhino Initiative in April 2014 after receiving a university grant that funded a visit from wildlife veterinarian and conservationist Will Fowlds. Fowlds works on the front lines in the battle between the poachers and the conservationists, using his life-saving surgical skills to save the injured rhinos that somehow manage to survive the killers. After Fowlds spent a week on campus and helped students better understand the poaching crisis, the Rhino Initiative mushroomed out of the experience, Slattery says.

“It's a program that we run in the Eastern Cape in South Africa focused on a broad, multi-faceted approach to help solve the rhino poaching crisis. We are part of a group of NGOs, government agencies, private reserves and other stakeholders with a singularity of purpose to help preserve rhinos in the wild by bringing together conservation, rhino management, community projects, protection and law enforcement. It also is focused on getting TCU students into the field in South Africa during study abroad experiences,” says Slattery. 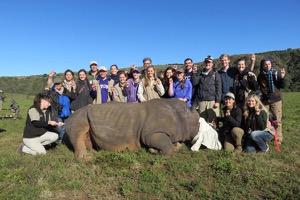 Students participating in the TCU Rhino Initiative have so far organized various public awareness campaigns to help more people understand the plight of the rhino, and they’ve even assisted with surgical procedures in the field, becoming advocates for the cause once they return from their study abroad, says Slattery. Their work in the South Africa has also included tranquilizing wild rhinos to replace batteries in their tracking collars that aid conservationist protection efforts.

“We are in the process of establishing a permanent facility in the Eastern Cape, the ARCC - African Rhino Conservation Collaboration, a protection and rehabilitation center at which TCU will have a research and outreach base. The Initiative itself will continue to run study-abroad programs in South Africa, and we hope it becomes a central, flagship program at TCU,” Slattery says.

Born in South Africa, Slattery says he’s motivated in part by a sense of giving something back to his native land, “but also because I truly believe in field-based learning and extraordinary immersion experiences.”

Different species of rhinos live throughout Africa and Southeast Asia, but the initiative focuses its work in South Africa where the greatest number of rhinos live.

“There are some 3,000 in Southeast Asia, mainly Nepal, India and Java and Sumatra, but the vast majority, some 80 percent of all rhinos worldwide, are in South Africa,” Slattery says.

“Between the black and white rhinos, there are somewhere between 20,000 and 25,000 of these animals left in the wild. And, if you’re losing 1,000 to 1,500 per year, you can begin to see that we’re moving towards a point of no return where these animals will become endangered and ultimately extinct within our lifetime, and we cannot be the generation that allows that to happen.”

About: Dr. Michael Slattery, TCU Professor and Director of the TCU Institute for Environmental Studies, returns to discuss his conservation work with rhinos in South Africa who face possible extinction due to ivory poaching.

Hosted by: The Greater Fort Worth Sierra Club