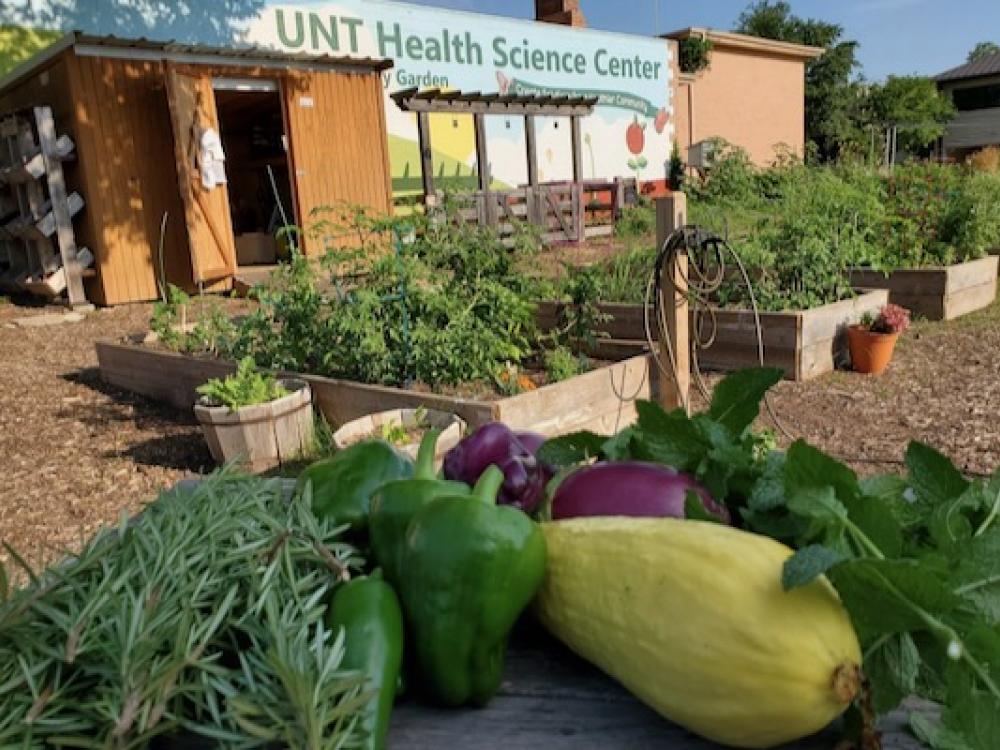 If YOU build it, they will not come.

Starting a community garden? Reviving a neglected one? Location, good soil and a few experienced gardeners are important. But the crucial ingredient is buy-in.

As the founding coordinator of an organic community garden that recently was honored by the city of Fort Worth with its Innovation in Land Redevelopment Award, I’m sought out for advice by folks longing to make their own community gardens flourish. I’m asked variations of:

Pardon my pun: It’s got to be built from the ground up by the folks who will keep it thriving.

I’ve seen well-meaning activists and church groups helicopter in, plant a garden and leave the rest to an under-resourced community. As I said at a workshop sponsored in July 2017 by the Tarrant Area Food Bank and the University of North Texas Health Science Center, “Don’t go into a community and create for them. People must feel empowered to make their own community garden.”

If you’re new to this, the model called Asset-Based Community Development is worth researching. 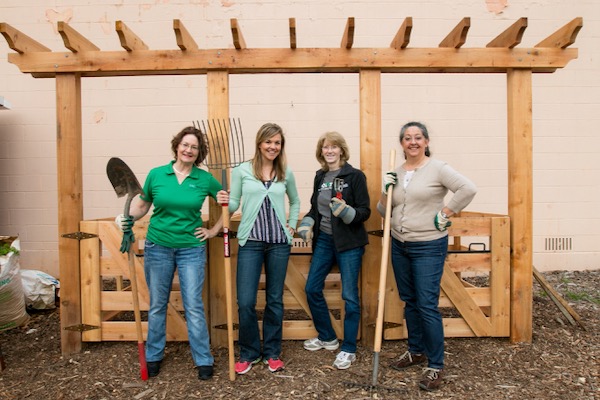 Several years ago, UNTHSC’s fledgling community garden committee in Fort Worth asked me to volunteer to be the founding coordinator. Maybe it was the pain med I was prescribed until I got hip replacements, but I had the chutzpah to think I could do it. I leaned heavily on the expertise of my good friend and gardening mentor, Deb Bliss, community garden coordinator at Community Unitarian Universalist Church in Plano; and the dedicated, brilliant UNTHSC staff.

By the time we put shovels in the dirt on Feb. 15, 2014 for the first Build Day, a year and a half of groundwork had been laid.

Watch this short video about the UNTHSC Community Garden. Courtesy of UNTHSC.

April 2013: A campus-wide survey showed 97 percent of respondents supported a garden on campus.

October 2013: The UNTHSC Sustainability Committee provided $8,000 for cedar frames, tools, irrigation enhancements and myriad needs with funds from a student fee. Various businesses donated everything from soil to plant sets to seeds.

Feb. 15, 2014: With literal heavy lifting by the UNTHSC Facilities Department as well as 40 employee and student volunteers, we installed frames for the first 16 plots. We transformed a quarter-acre of vacant St. Augustine lawn into a vegetable garden.

September 2015: After securing donations from businesses and receiving more funds from the Sustainability Committee – yes, be brave and ask! -- we built more plots. Today there are 35.

Late summer 2020: Over its lifetime, the garden has donated 1,524 pounds (6,096 servings) of fresh produce to local food banks including the student pantry on campus. As of September, the garden had composted 10,070 pounds of food waste, mostly from restaurant kitchens; and 567 gallons of coffee grounds, not only lightening the landfill load but also making rich soil from “garbage.”

Nov. 4, 2020: The City of Fort Worth honored the HSC Community Garden with an Innovation in Land Redevelopment Award during its Environmental Excellence ceremony. 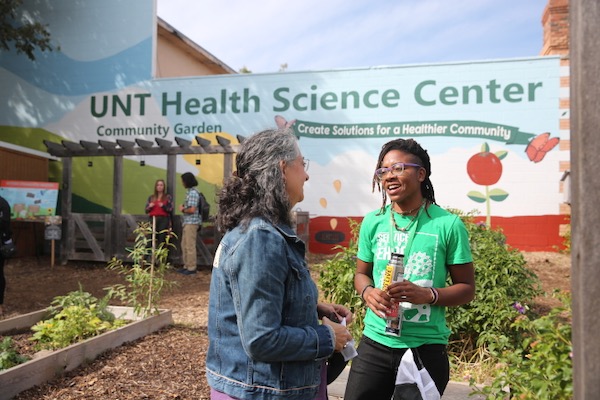 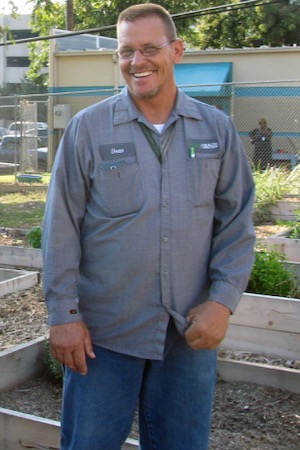 The late Dean Conine, foreman of the UNTHSC ground crew, put in many hours in the garden. Courtesy of UNTHSC.

After a few years of coordinating the garden, my day job in the UNTHSC Office of Brand and Communication grew more demanding. Shelly Borders, the university’s associate director of foundation relations, took the reins and in her capable hands, the garden continued to thrive. The UNTHSC grounds crew, under the direction of their foreman, the late Dean Conine, went above and beyond to help keep it healthy and attractive.

In May 2019, Celina Esekawu became the paid coordinator and has brought the garden to its full potential. She personally tended many of the plots during the pandemic.

We were blessed from the beginning. We had the support of a well-functioning institution dedicated to human health, a suitable piece of land with irrigation, and seed money – literal and figurative.

•    It helps if everyone is flexible and not territorial. Two days after that first February Build Day, I was driving home when one of the gardeners called me. “Someone’s planted in my plot!” Only two days in, and already we had what I feared was a dust-up. A gardener had become confused about which plot was hers and had fully planted someone else’s. I asked the caller, “Is the plot next to you empty? That was supposed to be hers…” “Yes, it’s empty.” So they switched. No hard feelings, just a mix-up.

•    Rats! Literally. I found their droppings in the tool shed. I fumed to myself, “I don’t know why the gardeners refuse to put the extra seeds away in the plastic bins…” But wait. What are these green shavings? The real attraction was the bar of Irish Spring soap I put on a shelf for hand-washing. Rats love fat. Lesson learned. 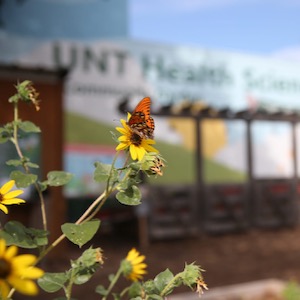 narch makes a pit stop at the garden in June. Courtesy of UNTHSC Community Garden

There is magic in the garden, every time I go there:

•    A robin lives in the tree on the garden’s edge. Every time I visit, she glides down to rummage for worms near my feet. She isn’t afraid of me.

•    Our Chinese gardeners grow a form of squash that doesn’t succumb to squash bugs, which often wipe out traditional Texas cucurbits in a week.

•    We were charmed by a young man whom none of us knew when he asked if he could bring his girlfriend to the garden and propose to her. 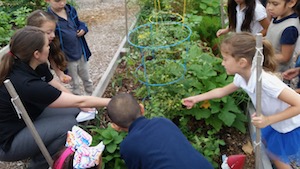 Kids learning in the garden. Courtesy of UNTHSC Community Garden.

We have brought hundreds of children and adults to see the garden, touch the vegetables, smell the flowers, and ask us about everything from how to make compost to why we don’t have beehives (a neighbor offered them but we’re reluctant to run the risk that the adjacent daycare’s children might be stung).

The garden’s lessons are not only about sustainable food production. They’re about grassroots food justice. My deepest regret is how I accosted a man foraging in the garden. I spoke to him sharply. Then I realized he might be homeless. He went away with a tomato or two to eat. But I felt so torn. The garden is for feeding those who need food. But we have our established ways of doing that, donating 25 percent to food banks, and what if those tomatoes were important to the gardener whose plot he picked them from? But here in front of me was a hungry human being.

From this we learned how to share in more forthright ways. We toured gardens that serve foragers. The UNTHSC garden now has bins with produce for the taking, and signs that explain. I learned to invite foragers to garden with us, and to keep grinding away at the sharp edges of my judgmental temperament.

I recently was laid off from UNTHSC due to budget cuts caused by the pandemic. But I will forever hold the garden and its people in my heart. 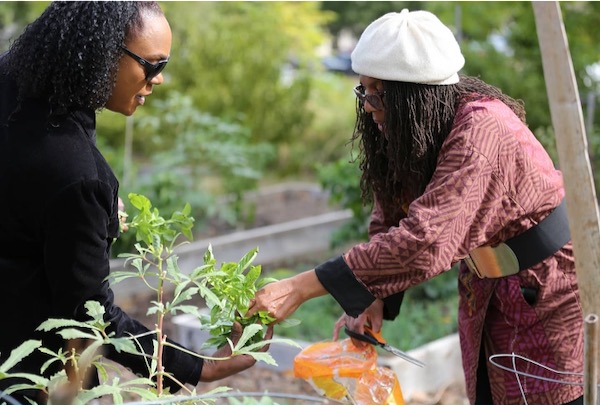 Betsy Friauf is an award-winning journalist whose credits include the Dallas Morning News’ garden section, Fort Worth Star-Telegram’s health and wellbeing section, TCU’s research magazine Endeavors and the American Heart Association. As a founding member of the UNT Health Science Center’s Sustainability Committee, she served as founding coordinator of the campus’ community garden and as a member of the Tarrant Food Policy Council’s Urban Agriculture Working Group. She is co-author of a forthcoming book on the history of the eugenics movement in Texas.